INTERVIEW: I’ve had the pleasure of interviewing Phil Liggett many times over the past dozen years – from my very first interview as pretty much a star-struck fan in early 2003, to our recent connect via email for this piece, Phil has always graciously made himself available for our questions and requests.

Even in the ever changing world of cycling, it seems that we’ve sometimes said it all before, so the challenge for me becomes one of finding subject matter we’ve not yet covered. And it’s here where Phil never disappoints – his answers are well thought out (as you’d expect from a journalist with over 37 Tours de France and countless other cycling events under his belt) but he also shoots from the hip with answers that come from his heart.

For this round I was interested in Phil’s views of how social media and the growth of the internet has impacted his role as a journalist who’s most famously known for his television coverage (with his long-time colleague Paul Sherwen), where we’re at with doping, the UCI & ASO mucking about, and even some actual cycling questions. 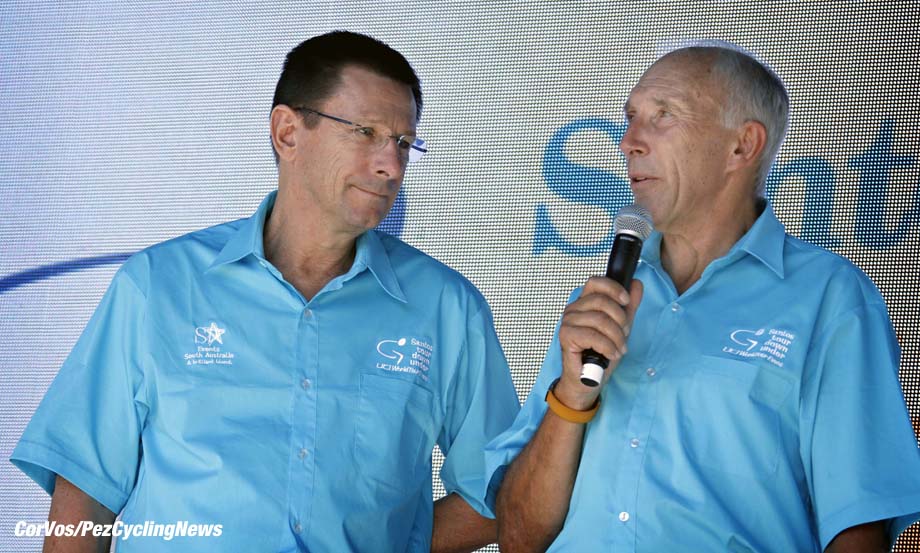 But to set the stage let’s turn the clock back to July 1990 – that’s 25 years ago – when I first met Phil on the slopes of Mt. Blanc after the stage finish in Megeve. A buddy and I had just spied Phil covering the Tour for ABC tv, filming his end of day wrap-up in a field beside the final climb of the day’s stage. After much courage-building (“we’re not worthyyyyy”), we finally approached Phil and asked if he’d help us play a joke on our pals. We were more than a little shocked when Phil happily agreed to staging a fake interview with me, as if I was actually riding the Tour. He was so cool and professional about it, not at all what I’d expected from a media personality of his stature.

—————-
Pez: Phil – we’ve been talking for years now – and if memory serves, you’re already on your extended ‘winter’ stay in Australia’s summer? What do you have planned for the next few months?

Phil: For the past 15 years or so, Australia’s Summer of Cycling has just grown and grown and it is now a haven for cyclists Down Under, and the rest of the World for that matter. For me, it is a chance to meet them and build my portfolio for the rest of the season. It all began on Jan 1st with the Bay Classics – a series of fast crits around the towns on Port Phillip Bay in Victoria. Then followed the Australia Championships – 12 titles decided in five days – in Ballarat. This is unique in that the venue has been used almost constantly since 2000. Then it is off to the Tour Down Under where top teams gather for the opening of the World Tour. This year, a slight change, in that I am going to New Zealand right after the TDU to interview Greg LeMond at a flash dinner in Sky City, Auckland. Greg was tempted by the fishing and I was flattered to be asked! Then back for the 2nd Cadel Evans Great Ocean Race, which has a crack field including Mark Cavendish. After that, my last race in Australia will be the Sun Tour, and the organizers are besides themselves as Chris Froome has asked to ride! All events get great TV, so it is a super time to be in Oz. After this, it is home for two weeks in the UK, then to South Africa and finally to Europe in April, for Paris-Roubaix. 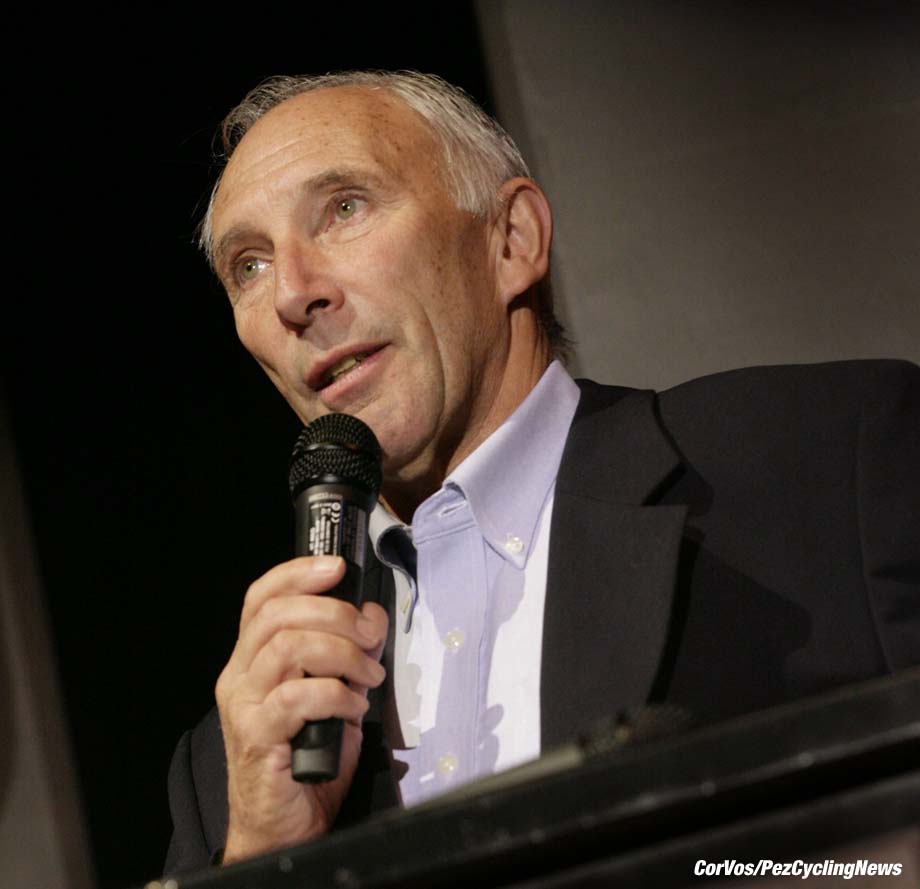 Pez: How has the explosion of social media, blogs, websites and even so much more television coverage of pro cycling impacted your own work as a journalist? How do you use social media?

Phil: For me the Social Media is for others. I am not the sort of person to tell people what I have for breakfast or that the coffee was crap in my local shop that morning. If you try to be serious then there is always some smart Alec who will be rude or facetious. So, I read, but rarely tweet unless it is to pass on a good cause. I have an imposter on Facebook and, as they (Facebook) did nothing about it, I don’t go near it. However, I do keep an eye on what others are saying. Television puts a lot of interest into social media, so we are often passed information when we are on television.

Pez: There was a time when the masses looked to ‘official’ press sources as the only places to get the news – but now that’s all changed. Social media really does let everyone with a device and a web connection broadcast themselves – essentially creating millions of media sources. Credibility and accountability have gone out the window, but as social media has proven so many times, credibility never stopped people from believing something is true. What do you think of all this?

Phil: I think what you say is correct. Stories are blown up, misunderstood, incorrectly interpreted, by many and when you can only argue in 130 characters. It is a dangerous medium as far as I am concerned. It really has changed the intention for which it was designed – social chat – into the life and death of media outlets. 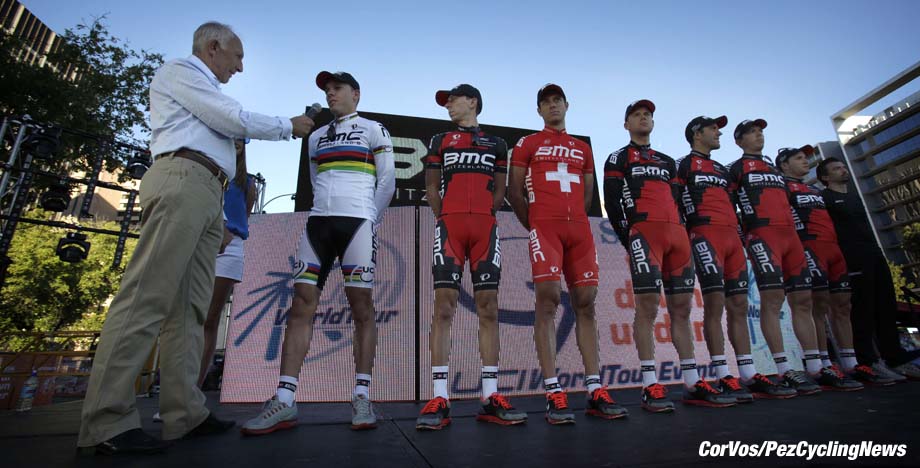 Pez: What are your thoughts on the current state of professional cycling – we have so many issues affecting the sport – doping continues to be a massive problem – the recent revelations about organized doping in Russia from the very highest levels make it hard to believe ‘clean sport’ can even exist at a top level.

Phil: Doping is a massive problem in World sport, but that didn’t stop us cheering East Germany to all its drug-induced Olympic records, many of which still stand. So in this respect nothing has changed, China has shown in the past it has operated in the same vein as Russia. The agencies are at war with every sport where money, prestige and huge gains are the driven causes. From a cycling viewpoint, of course, it is not completely clean, but talking with the younger generation of professionals, they are very different to those who have recently passed through the Armstrong era. Cheats will always be around in all sports – as we now know after recent revelations in athletics and ball games – but this makes the work of the drugs agencies even more important. When I was the organizer of the Milk Race I was involved with a professor Arnold Beckett at a London University who did my drug testing for the then, 12-day race. His words were: “ At least cycling is trying to be honest, while the other sports are pretending it isn’t happening.” Forty years later, Pro Beckett has been proven right. 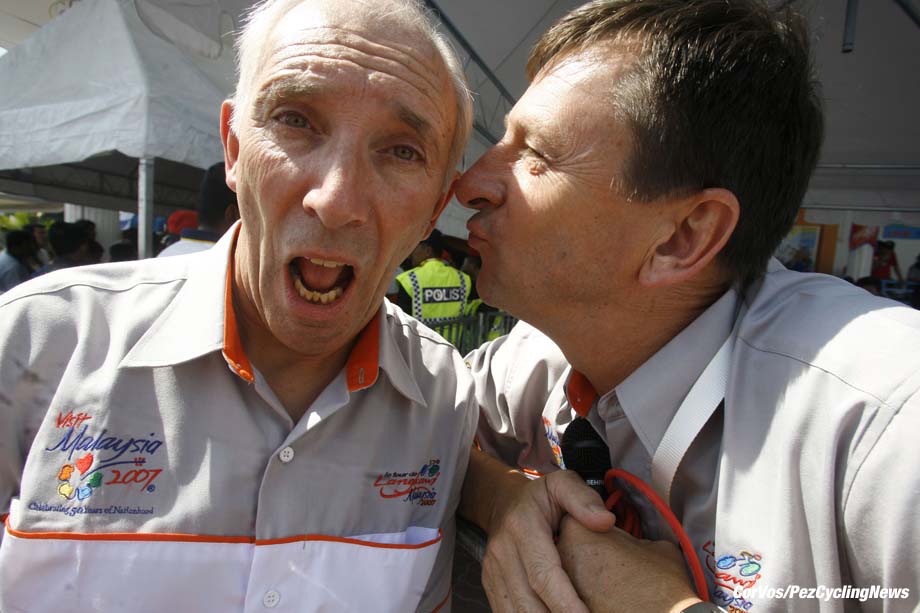 Pez: How do you see the current situation between the UCI & the ASO resolving itself?

Phil: The clash of top organizers and the World Body (UCI) is nothing knew. The ASO and the UCI will reach a compromise, and this is what it must be. Both parties have come through the bad times and I hope, in this respect, they are ready to talk things through around the table. Brian Cookson, the UCI President is a sensible guy and, while I understand how ASO might feel, it would not be good for the sport to go sideways as happened in snooker, darts and boxing. There are many problems in professional cycling, but this one needs to be resolved quickly.

Pez: In light of the recent attacks on Paris, what are your thoughts on le Tour as a target?

Phil: A target? When a crackpot is prepared to die for his “cause” then quite frankly, there is nothing anyone can do. So why single out the Tour de France when a crowded coffee shop will get the same publicity. We are dealing with terrorists who are irrational and have no part of a multi-cultured life-style. They feel they have no place in our World and maybe this is why they are urged to fulfill the cruelest acts against mankind. 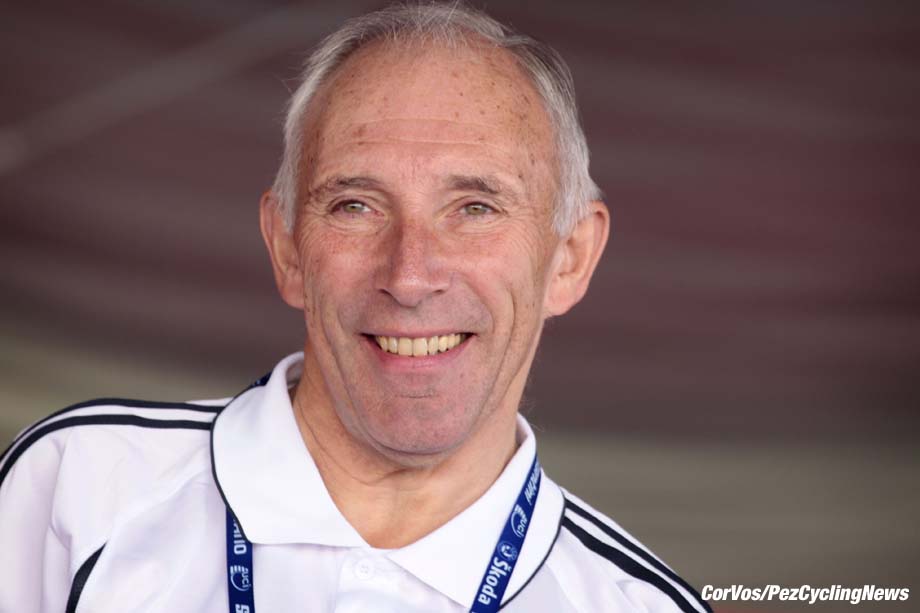 Pez: Races like Le Tour & Giro are reporting record numbers of TV and internet viewers in recent years, while sponsorship of teams and events has retracted in recent years. Where do you see the popularity of cycling in these times?

Phil: There is no doubt that the sport (and particularly) the pastime is at a higher level of popularity than ever before. London is spending millions of dollars building cycle paths and roads, for example. Where I live, cyclists are ever present in the lanes, whereas five years’ ago, I hardly saw one. Membership of the two bodies in Great Britain, British Cycling and CTC, has never been higher. My neighbors talk about cycling now with the knowledge of an expert (exit me!). After the Armstrong affair, viewing figures dived, but have now returned to the same levels as before. Crowds at the Amgen Tour of California and USA Pro Challenge, are as large as ever. It’s funny really, as in the years since Armstrong, many sports have had major drugs scandals – athletics, football, horse racing, tennis, AFL, etc – but they pass into history very quickly and we return to bashing cycling. Our sport is likely the cleanest of all just now.

Phil: I really do not have stand-out races, as I am happy to be privileged to cover them all. I did enjoy the Tour in 2015, as all the favorites came to the table and each attacked Chris Froome right up until the end. Chris lost half his lead in the last three days, but won a great race. 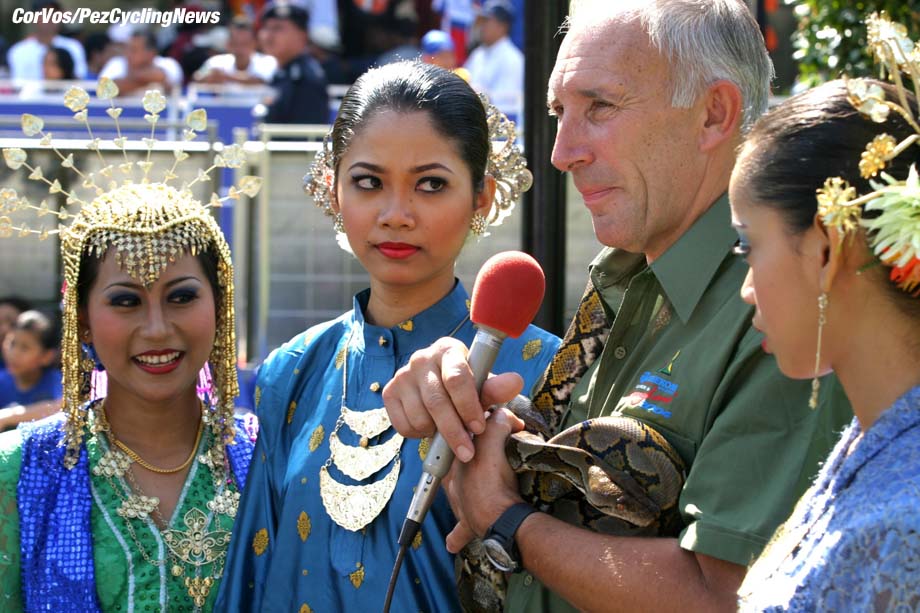 Phil: I was particularly impressed by Rohan Dennis, who became the Australian Rider of the Year. He won the Tour Down Under, held the World Hour Record and left the Tour de France with the fastest Prologue ever ridden in Utrecht. Above all, he is a modest and super guy to work with (I did a Tour on stage show with him, Jens Voigt and Simon Gerrans in November in Australia) so I hope he continues to improve in 2016. I also must say that Lizzie Armitstead was a real stand-out among a good women’s generation. Not only was she the fourth British World road champion, but also a great example of how to succeed. She is an example to all young women coming through. 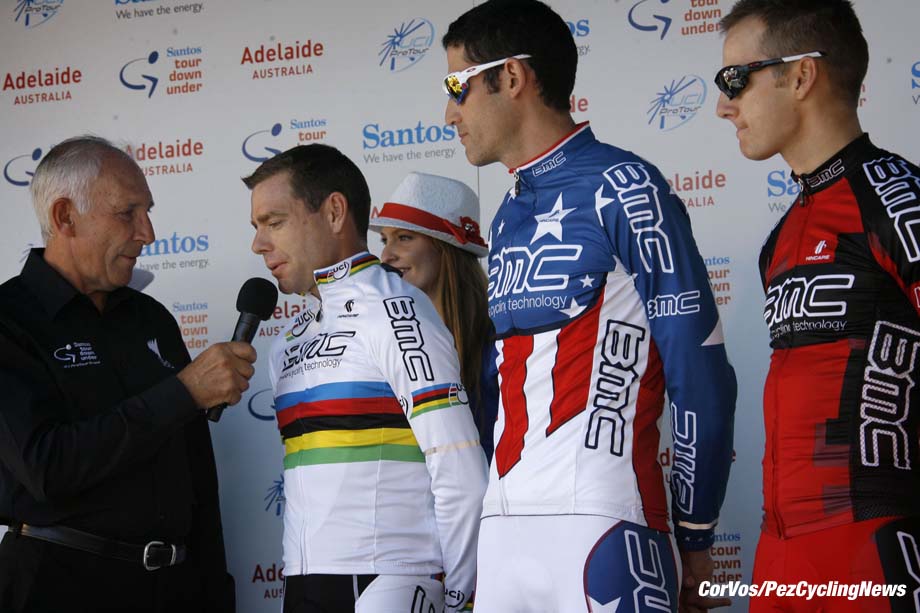 Phil: Well, at my age, just being able to work is a bonus, but the TV companies still think I can do it, so I am looking forward to my 15th Olympic Games for C7 Australia and my 44th Tour for NBC and the rest of the English-speaking World, except the UK. Roll on 2016! 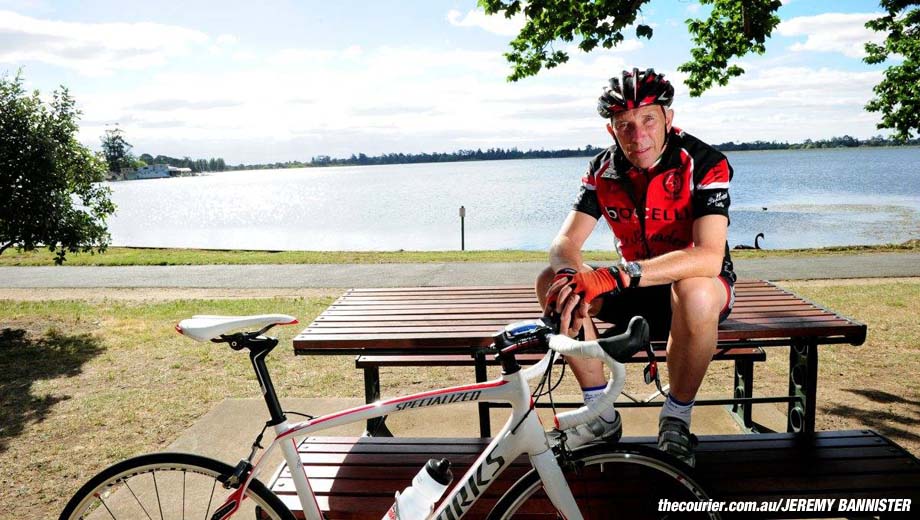 – Huge thanks once again to Phil for taking time to talk with us, and you can follow Phil @twitter.com/philliggett

New sponsorship for BBB Cycling in 2016