Philly: if you were a soul music fan in the 70’s, then like The Ritchie Family said in ‘The Best Disco in Town’ – “The now sound’s the Philly Sound!” Given that this was the town where Billy Paul and Harold Melvin cut the smoothest of soul groves, it was a certainty that any bike race in Rocky Balboa’s home town would be cool.

And so it proved; Eric Heiden swapped his gold speed skating cat suit for a 7-11 team strip and in 1985 became the first winner of what is now the TD Bank Philadelphia Cycling Championship. It’s a race with its own personality, through the streets of one of the USA’s great cities, big on partying, beer and barbecues – just like a bike race should be.

This year the route was shortened to 200 kilometres (down from 250 K) but diminished distance was cancelled out by increased speed and aggression.

When TT1 PR Manager Chris Baldwin emailed us the winner, we asked; ‘how did Big Aldo go?’

It sounded to us like we needed a word with the big man from Ptuj.

Ilesic’s first win of note was a stage in the Tour of Slovenia in 2003.

He joined Slovenian Continental team Perutnina Ptuj in 2004 and stayed with them for four seasons.

That same year he took a stage in the high speed Olympia tour in Holland.

The following year there were podiums from Croatia to Cuba, by way of France – but no big wins, although he did have the leader’s jersey in the tough Paths of King Nikola stage race in Croatia.

There were stages in the Giro Delle Regione in Italy and Course de la Solidarite Olympique in Poland in 2006; with the biggest result of 2007 being a win at home in Sencurja.

With the Sava team for 2008 he won the early season Porec Trophy in Croatia, at Leonding in Austria and – significantly, five criteriums in the USA.

These wins gained him a ride with Team Type 1, where he’s remained ever since, as the team has moved up from Continental to Pro Continental.

In 2009 he took two criterium wins and a host of placings for his new sponsor.

Losing weight over the winter, the team wanted him to become less of a crit rider and more a performer in UCi stage races – he obliged with three stage wins in the Tour of Morocco, one in the Tour of Mexico and two in the Tour of Rio de Janeiro.

Last year saw him take two top ten stage placings in the Etoile des Besseges as sell as a host of top 20 finishes from France to California via Croatia.

We caught up with him in Colorado as he prepared for the high altitude Tour of Qinghai Lakes in China. 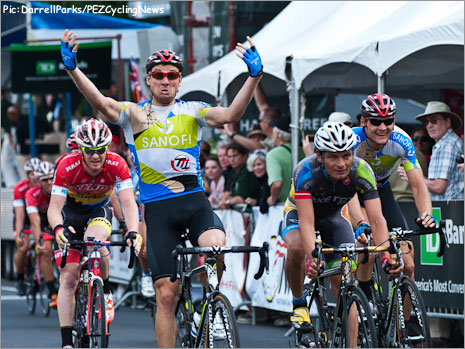 Serebyakov and Ilesic go 1-2 for Team Type 1 at Philly.

PEZ: Congratulations, Aldo – Philly was shorter, did that make a difference?
Aldo Ino Ilesic: It wasn’t any easier due to the lesser distance; there were fewer long, slow periods and it meant that there were more fresh guys at the finish.

I think that the organisers were looking for a more aggressive race and also there was the Fondo before the race – I think timing had a hand in the shorter distance.

PEZ: What was the Team Type 1 plan?
AI: Exactly as it happened!

Make the main moves – except for late ones – then focus on the sprint with Aleksandr, Daniele and me.

PEZ: There was a dangerous late break – that must have put the onus on TT1 to chase?
AI: Yeah, but that was good because even although it meant it was fast, it was less aggressive.

UnitedHealthcare did a lot of work with us to get it back, they were looking for the win with Keough, Forster or Van Poppel, all fast guys – but Keough came down

PEZ: How did you communicate with Aleksandr, he doesn’t speak English?
AI: We both speak Italian.

PEZ: And for the first time, it rained!
AI: Yeah, but only for 10 minutes, it was really heavy, though – we were worried it would make the roads slippery.

But with the wind, the surface dried super-quick.

It was a little cooler than usual and that suited me. 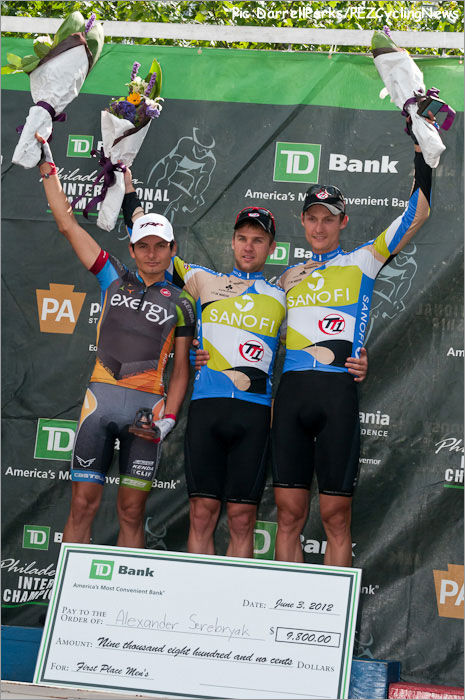 Serebyakov and Ilesic top the podium with Freddie Rodriguez in third.

PEZ: How were the crowds?
AI: Huge!

It’s a really big race; the crowds on the Manayunk Wall were amazing – you could smell the beer and the barbecues every time up.

PEZ: Talk us through the sprint.
AI: Originally the plan was for Daniele to be set up for it; but as the race came into the final stages Aleksandr and I decided to go for it – we work well, together,

In the last two kilometres you pass the finish on the opposite side of the road, then with one K to go there’s a big roundabout – when you exit that, there’s around 700 metres to go.

It’s slightly uphill and always a headwind – last year I waited too long, this year I decided to go for the line and if the guys came round, they came round.

I looked back at 50 metres to go and could see Aleksandr coming up fast and I hoped Daniele would make it too and we’d get 1-2-3 – but Rodriquez just pipped him.

PEZ: And TT1 took the King of the Mountains, too.
AI: Yeah, that was part of the team game plan – Kiel Reijnen took the first four climbs of the Wall and after that, he couldn’t be overtaken. 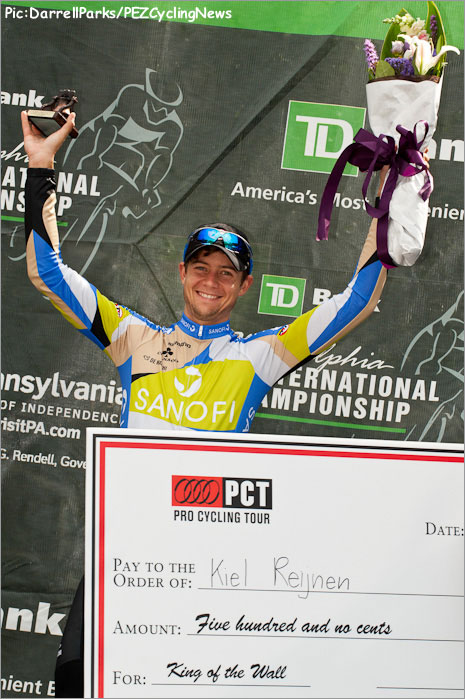 PEZ: I was looking at the TT1 picture of you – you’re looking skinny!
AI: That was at training camp – I’m not that skinny now, but I’m certainly lighter than I used to be.

PEZ: And what’s next for you?
AI: I’m actually in Colorado at the moment – it’s a great place – to prepare for the Tour of the Qinghai Lakes.

I go from here to the Tour de Beauce in Canada then back here, again before China.

After that I have two weeks back home in Slovenia.

I’ve raced in New Zealand, Korea, Europe and the US, this year – I travelled less last year but so far it’s working out well for me.

PEZ: And you must be thinking you can win in Philly, one day?
AI: Yeah, after last year I was thinking that way – but this year it worked best if I was lead out man.

******
Once again, a quality race in the home of the Liberty Bell – I need to get over there, maybe next year?

PEZ KIT: Sharpen Up For Summer!