Team Manager Interview: Douglas Ryder was the man behind the MTN, NTT, Nexthash and the Dimension Data WorldTour teams, who were all connected to the Qhubeka Charity that helps kids in Africa get on a bike for transport to school and change their lives. Last year he was without a main sponsor, but for 2023 he’s back with the Q36.5 Cycling Team. Ed Hood learns more about Doug Ryder. 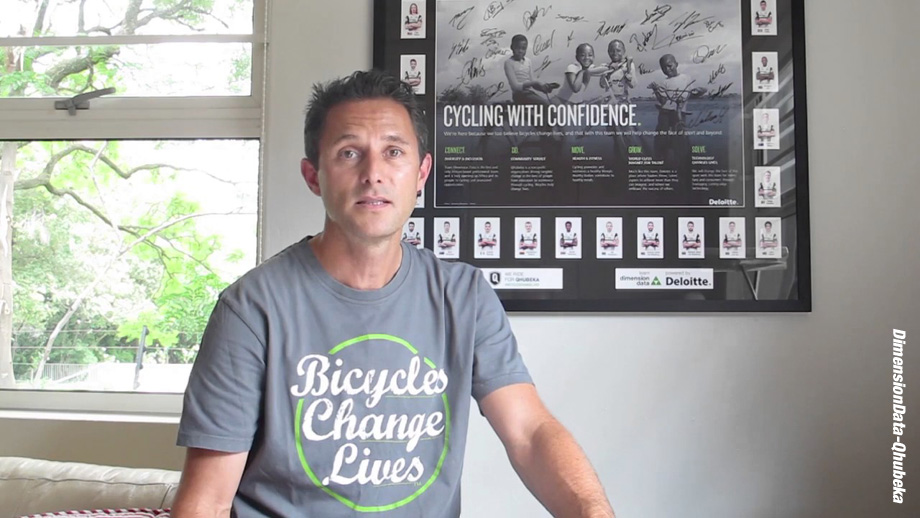 We’ve heard it so many times; the team loses the sponsor and folds – ‘we’re taking a year to regroup but will be back the following season,’ they say. Sadly, it very rarely comes to pass. But Douglas Ryder is made of stern stuff; his Nexthash Qhubeka World Tour team folded at the end of 2021 but the team soldiered on at continental level through this year, riding the Tour of Britain as part of a solid programme. And the good news is that for 2023 his squadra will be moving back up the divisions to ProTeam with his new Q36.5 Pro Cycling Team. We caught up with Douglas recently to hear his story. 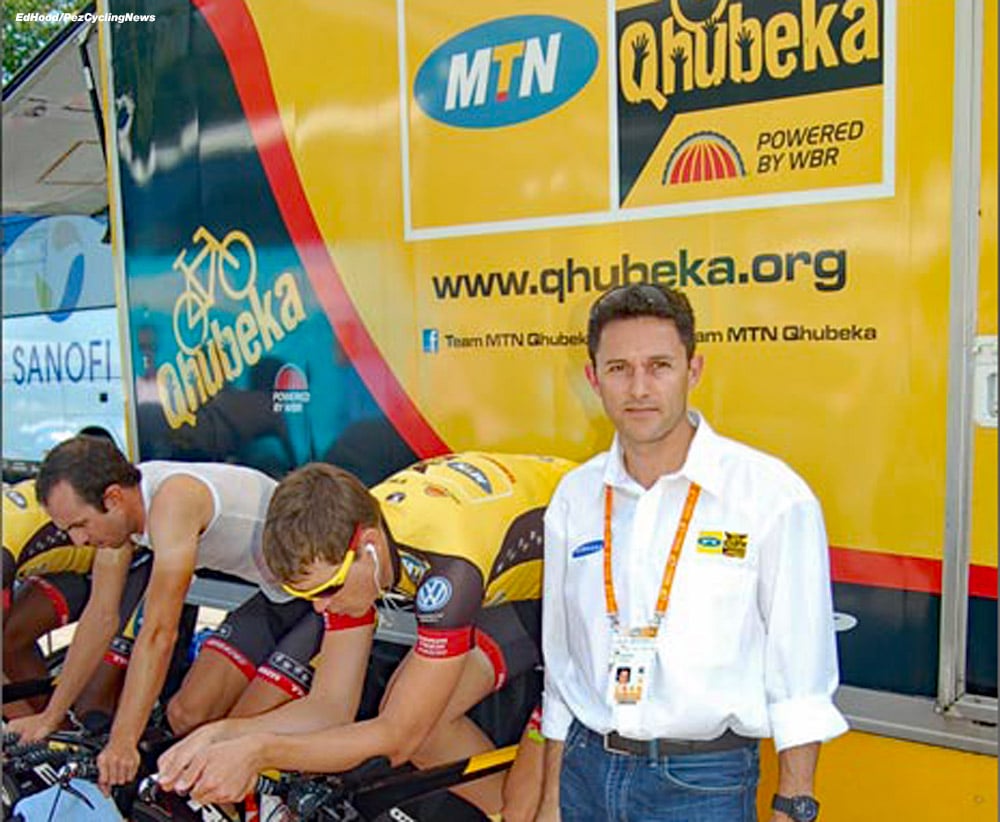 PEZ: How did you get into cycling, Douglas?
Doug Ryder: My uncle was into cycling and when I did my military service there was a cycling culture within the forces. There were South African pro teams but they weren’t allowed to compete internationally; it was only when Nelson Mandela became president that we could race internationally. The ‘92 Olympics in Barcelona were our first participation in the Games; I rode the ‘96 Games in Atlanta.

PEZ: What was the cycling scene like in the RSA?
There was quite a lot of racing, short stage races and the famous Rapport Tour which was basically a Tour of South Africa and attracted good names, albeit they weren’t supposed to ride in non UCI approved races so took on assumed names. Sean Kelly and Pat McQuaid rode and fell foul of officialdom, losing their chance of competing in the Moscow Olympics. 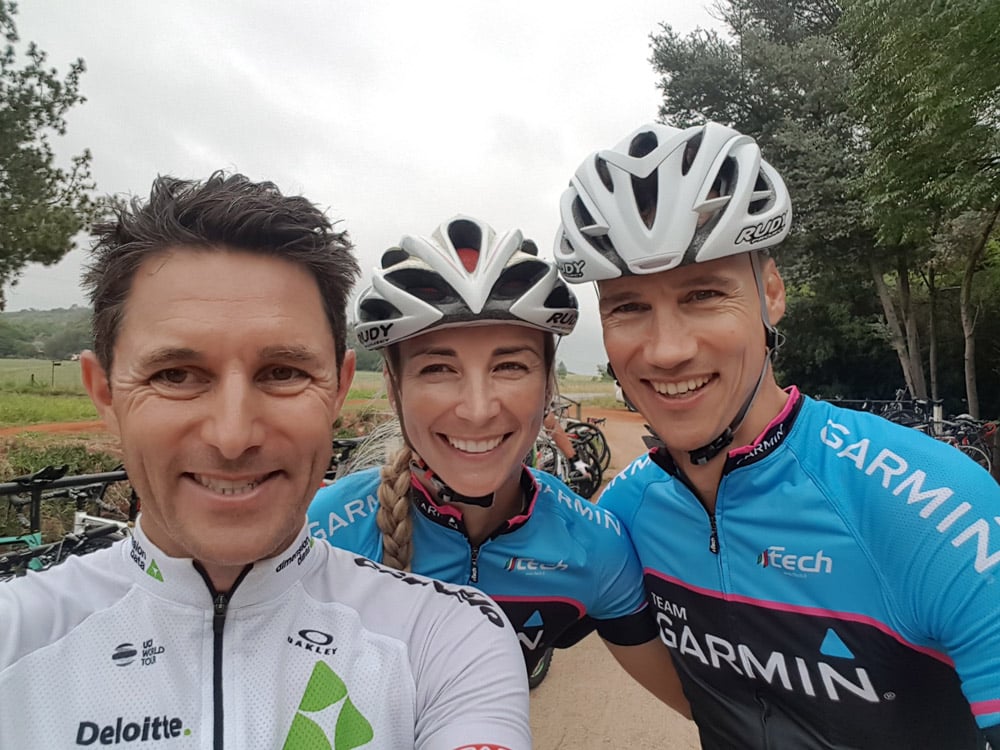 PEZ: Your first team as a pro was, ‘Peaceforce Security’?
That was a South African team, the company did home security, armed guards that kind of thing. The British rider, Keith Reynolds rode with us and we had South African cycling legend, Alain Van Heerden as manager.

PEZ: Then you rode for US teams?
Yes, Plymouth – that came about when I met Malcolm Elliott and Simeon Hempsall at a race in Cape Town; they were riding in the US for LA Sheriffs at that time – they got me the introductions. I was on the team with your Scottish compatriot, Brian Smith and rode the Tour Dupont with Plymouth. 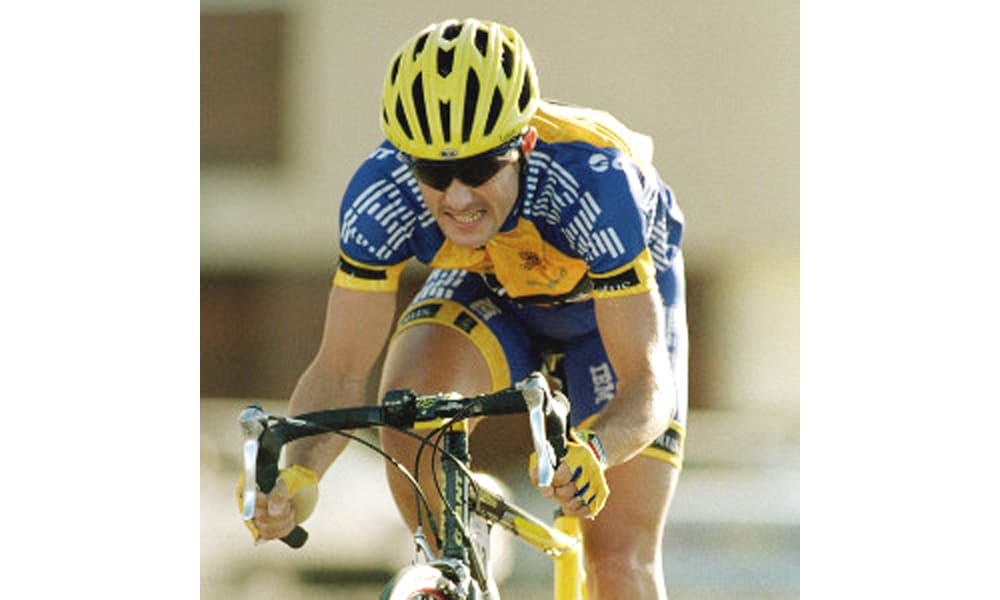 PEZ: Then back to South Africa with IBM-Lotus and Microsoft?
A lot of US teams folded after the ’96 Olympics, the Games were the pinnacle and there was a hiatus after that. I was working with Lotus Computers back in the RSA and we started a team, I got into management of the team and that was the beginning of my journey to taking a South African team to the Tour de France in 2015. I decided back then in the 1990’s that I wanted to start a team which show cased African talent – and here we are, still going.

PEZ: How did the Qhubeka connection come about?
I met a guy called Anthony Fitzhenry during my time in IT, his dream was that every school in Africa should have computer access but what he realised was that the main inhibiting factor in most of Africa was the lack of mobility so he went from being an ‘IT guy’ to a ‘bike guy.’ We work together and so far 105,000 bicycles have been donated to schoolchildren and key workers across the Republic of South Africa and the southern African continent. 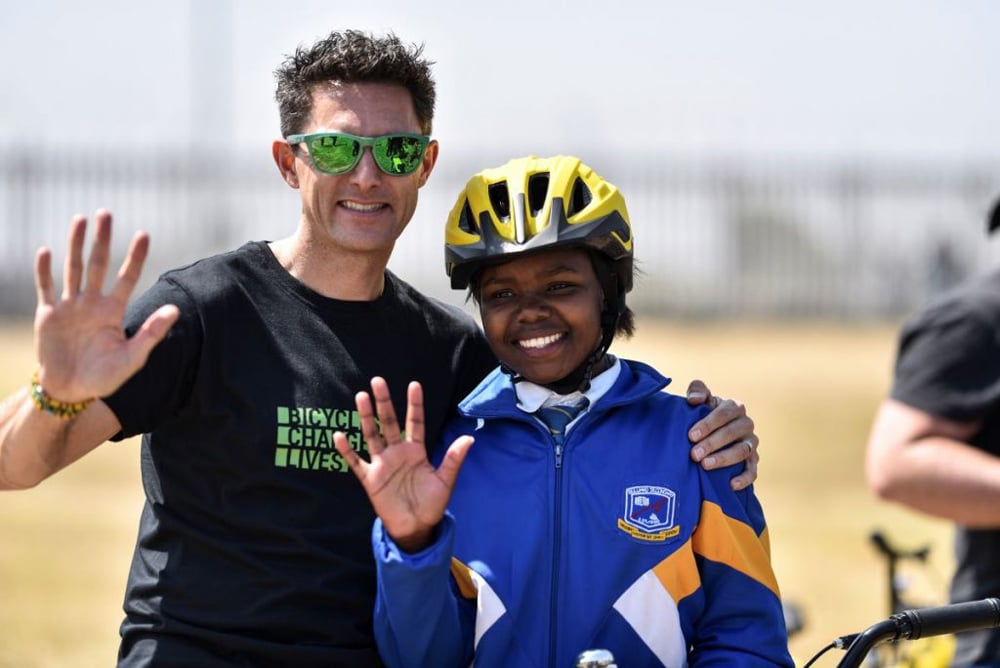 PEZ: You’ve ‘bounced back’ from going WorldTour down to Continental then back up to ProTeam – no easy trick to pull off.
It’s been a tough time, it’s hard when you can’t raise funds not just for your riders but your staff too; but here we are – and our journey’s not done yet. I’ve been fortunate in meeting certain people. . .

PEZ: Q36.5?
Stands for Quaerere – ‘research’ in Latin. 36.5° in centigrade is the temperature of a healthy body. The company was launched in summer 2013 by Luigi Bergamo and his wife Sabrina Bergamo Emmasi, who combined have over 40 years of experience working in high performance cycling apparel. We came together with them and have the same agenda, caring about the environment and having a mission of ‘Racing the Future’ – allowing the team to function as a research laboratory and vehicle for change, aiming to redefine the future of the sport and its impact on the world. Other of our sponsors, like Mercedes have remained loyal to us and although we haven’t announced it yet we have a top line bike sponsor on board. 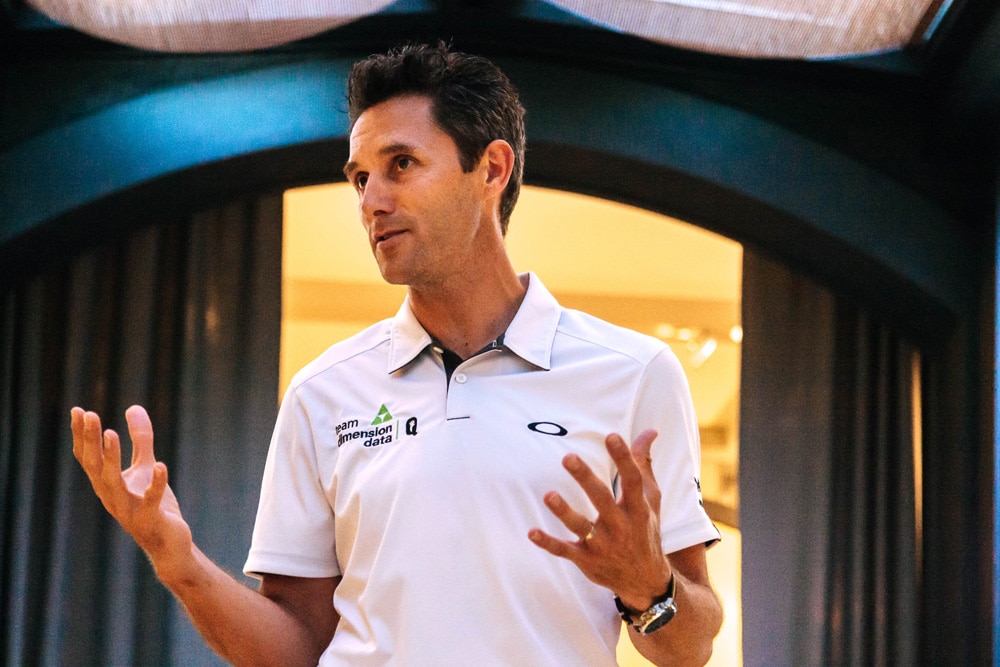 PEZ: ‘The Shark’ as technical advisor and Q36.5 brand ambassador?
Vincenzo Nibali is an amazing guy, he’s one of a very select few to have won every Grand Tour but he’s also won Monuments; Milan-Sanremo and il Lombardia. The team has a strong Italian connection, our continental team with our African riders is based in Lucca; Vincenzo wants to keep involved in the sport and finds our team to be an interesting project. His input on training to our young riders will be invaluable.

PEZ: Will there still be a Qhubeka connection?
There always will be as long as I’m breathing! After this interview I’m off to Cape Town in my role as a Qhubeka ambassador, helping to raise awareness and funds for the organisation. 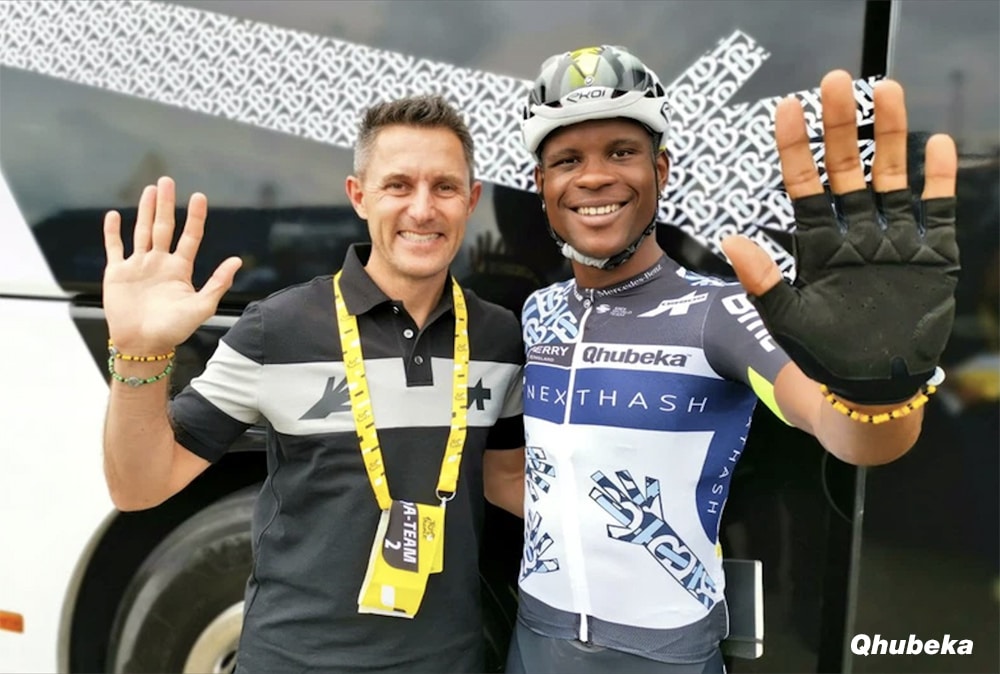 PEZ: Tell us about your roster for 2023.
We’ve signed a lot of good guys; riders like Jack Bauer, Gianluca Brambilla, Tom Devriendt – who was fourth in Paris-Roubaix this season – Joey Rosscopf. . . And we have good young riders who are on the way up. The culture of the team is more than just to, ‘look good in Lycra;’ Gianluca Brambila said to me that he’s always wanted to be part of the team because it’s more than just about results. 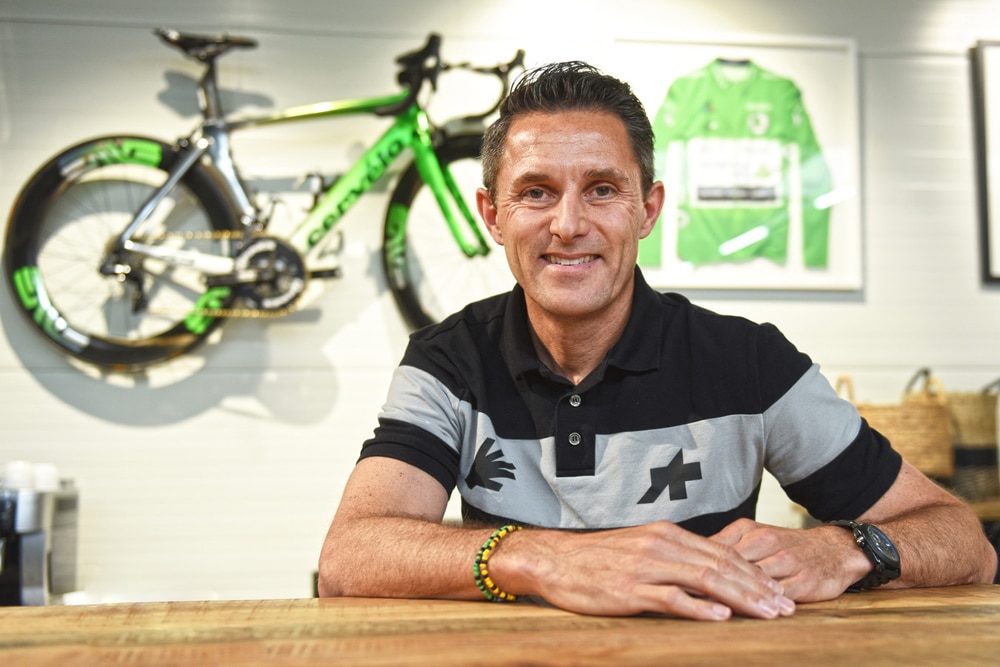 PEZ: Tell us about Douglas Ryder, the man.
I tend to keep my private life quiet but I turned 51 years-old 26th November, I’ve been married for 23 years and have three children, an 18 years-old boy and twin girls at 16 years-old. I live in the Netherlands to be close to the team but still have my links with South Africa where I have two brothers. I don’t have a lot of time at home, I’m on the road a lot of the time – building the new team was a big commitment. To switch off I like to read; adventure, court room dramas and autobiography – when I have time. . .

PEZ Trackside at the ‘Rotterdam 6’: The Boards Are Back!