Trying to get together with a pro cyclist, especially one that’s splitting time between the US domestic scene and the National Team in Belgium, ain’t exactly easy, but after a couple of phone calls and a dozen or so emails, we finally connected with Mike Creed of Prime Alliance. The laughs alone were worth the wait…

Yep, the same Mike Creed that’s going for a third win in a row at the U23 National Time Trial Championships, is coming off taking a Sea Otter stage from Saturn phenom Tom Danielson (who Mike calls a monster talent that was pulling the break like a diesel) and is now rolling around Belgium trying to kick a cold in time for a 7 day stage race in East Germany. 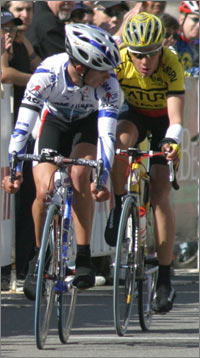 Of course me being a Tech guy, I had to ask about Prime Alliance’s super cool Prince LS with the wavy fork and seat stays etc…, so that’s where we start, and in typical Creed fashion, the answer cracks me up…

Creed: It was great for the first 24 hours.

Creed: Well I wrecked it almost immediately. Like 48 Hours. We were doing the Blvd Road Race and the Bottle cage broke. It was hanging in just the right spot once that happened and dangled but was still kinda attached in front of the cranks, and the bolt and cage just kinda ripped right out of the frame… I won though!

While we talked I noticed a cough and sniffles, and asked Mike to compare the weather in Belgium to the US:

Creed: The North West. It’s overcast, or cloudy or windy, but mostly all three… Actually it isn’t all bad. It can also be beautiful here. I think that people just always see it during the classics and only remember the epics with mud and cobbles flying everywhere…

PCN: What do you wish you had there, as far as something from Home?

Creed: More TV channels. There are a few, we also get the news from BBC and CNN and Eurosport. It’s really interesting to see the news from the US perspective and then see it through the eye’s of other countries. One thing I would love would be a Tivo. Back home you can go out and ride for 5 hours and if you set the Tivo up for Simpson’s there are like 5 shows to watch when you get back. I am a big Simpson’s Fan.

PCN: Any tips for riding Cobbles?

Creed: Hell no, Not from me! You don’t want my help on cobbles (note, that at 5-10, 145ish Creed isn’t exactly made for the bumps). I have no idea how some of these guys do it. they just Haul Ass. I think you’re either a cobbles guy or your not…

PCN: What do you notice about racing there or about the racers in general anything stand out versus the US domestic scene?

Creed: Oh yeah, It’s a job here. It’s not a nice sport, it’s a living. Its two different worlds. At home, you can go do events and see friends. You are racing to win, but it’s just a different level of importance. Over here you have guys from lots of countries that on an average have so much less than we do in the US. US guys get homesick a bit, where these guys are ready to fight you so that they don’t have to go home! And home for a lot of these guys doesn’t come with anything close to the opportunities that we have in the US.

Creed: Great. You notice that things are different here though. It seems like people take a lot of pride in what they do. The attitude is way more laid back. I really like that. But at the same time, where you would see people run to the grocery store looking like crap, but not caring… Here you wouldn’t see that much. People would take the time to get ready to go out instead of just running out the door.

PCN: What do you think the US could use from Belgium?

Creed: Frites Stack’s (French fry vendors)! They are every where. You could be riding in the middle of nowhere here and not see a car for an hour, and you’ll, all of the sudden, see a Frite stack… and it will have a line of cars!

Creed: Not the Pasta! It’s crappy bleached stuff and it’s awful. But what they do well here is sweets! They take bakeries and sweets seriously! I love Chocolatacooken (cm: this is absolutely spelled wrong, but give me a damn break…). They are these little chocolate pastries and they’re magic! The problem is that they are like 30 or 40 cents! They would be two bucks in the US and you can’t walk away spending just 40 cents! 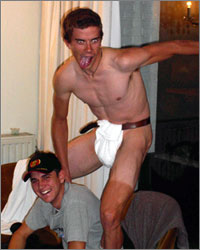 Maybe he’s more a sumo fan than a Samurai, and not afraid to ride uh… Anything!

PCN: Back to racing, other than the intensity, what do you not like?

Creed: Oh I like the intensity! You can feed off it! It’s just more noticeable. One thing I do hate are Race Radios! Not just because they take so much away from the sport, but because of the stuff you have to hear that does nothing for anyone. When you have busted your ass and are just absolutely thrashed, you don’t need to hear “You are et de Beck!” Believe me, I know I am at the !#**+ back! Or better yet, We were racing on the same day as Liege, and I was doing ok up front and then I hear “Tyler has a 15 second Gap” I’m thinking who the hell is Tyler and how the hell did he get off the front? I am wondering what I should do, or if I should start to hammer and then I hear “Tyler has won Liege”… Good thing I didn’t take off after him then…

PCN: So with your Girlfriend not there, What one thing do you notice about Belgian Girls? I mean what is an extremely common Characteristic?

Creed: Not one of them notice me… That’s the one thing that is most evident!

PCN: OK, So away from Belgium and Cycling, What’s your favorite movie

Creed: It’s great, it’s set in post nuclear war US and the lead guy is traveling to an Elvis impersonation contest. The past Champ is trying to kill all the other competitors along the way.

PCN: What’s the best line from the movie?

Creed: There are lots, but one that comes to mind is “If you were me you’d be good looking”. (cm: At this point I didn’t admit it, but I realized I had seen it, and it did bust me up…) 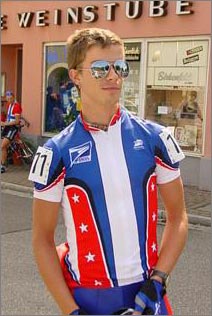 PCN: If you could be any character from any film who would it be and why?

Creed: Probably Chip Douglas from the cable guy! Because he total loves what he’s doing, is completely in his element!

PCN: OK, I gotta ask, I know you had a pretty good wreck in Tucson and heard you busted your head open and were pretty screwed up. That said, I heard you startled your room mate by walking out with blood everywhere after removing the staples from your head with A FORK?!

Creed: Yep (laughing), I cracked my skull (frontal sinus) and busted… well, I was hurting. (cm: I believe he also broke his arm or wrist and had other injuries in a pretty ugly fall) When I went to the hospital they said “Staples or stitches”. I have no idea why I chose staples… Well after a while I was going nuts and needed to ride but the Staples were right where the helmet rubbed, so I need to get em out.

Note that a week later, Mike won the Usery pass race in Phoenix after what was a pretty terrible crash (and no, he didn’t dump while trying to take off Knee warmers while riding!). But that’s what you would expect from Mike, coming off something that would make a lot of folks think about tossing the bike, or at least taking time off, he yanks staples outta his bean with a kitchen utensil, gets in a training ride and winds up stomping… After paying a little attention to him over the past couple of years, it seems the more obstacles you toss at him, the better he gets. He has solid talent and a great ability to motivate himself. He also has a little bit of a mean streak that I really like and is never (ever) afraid to speak up. Mike has all the character that some higher profile Pro’s could really use. That said, he will do nothing but benefit from keeping his eyes and ears open around guys like Vaughters, Clinger, Tuft and the Carneys, and I believe he has the right head on his shoulders, and I know he has the legs to get nothing but better. As Prime Alliance develops, the opportunities will be there for Mike.

Given the fact that he’s young (something that slips your mind when you talk to him because he comes across as someone who has paid more attention to the things around him than most guys his age) has good talent and looks at pro cycling as a job (My favorite quote about Belgium is; “I am not here to have fun. This isn’t a vacation, and the guys who treat it like that get a pretty rude awakening.”) you should count on hearing more about Mike Creed.