Nine stages down and the going gets tough. Yesterday saw amazing feats of strength as well as the biggest batch of adandons (8), of the 17 now gone. PEZ hears from Dario Cioni on losing McEwen, and from Iban Mayo on his super form.

Dario Cioni – Interviewed by Ed Hood
“It’s a long road to Paris. ” As the journos talk-up Michael (Skeletor) Rasmussen’s chances of winning the Tour, Dario Cioni takes a more pragmatic view. Let’s hear what else he had to say, on his day of rest.

Pez: First of all, how are you feeling, after two days in the Alps?
Dario: Saturday was not so bad, but yesterday was very hot and very hard so I’m a bit tired.

Pez: Mixed fortunes for Predictor/Lotto?
Dario: Yes, Cadel (Evans) was good on both days but we lost Robbie (McEwen) – he missed the time cut yesterday. He never really recovered from that crash on stage one – he hurt his back quite badly and it has affected his balance. Cadel has been able to stay with the strongest though – so that’s very positive. 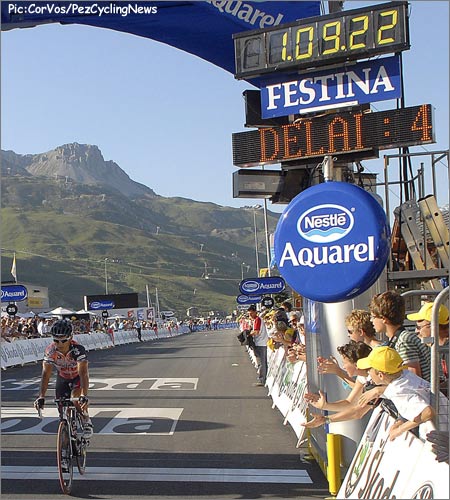 Robbie Mac cut a lonely swath crossing the line at Tignes a long time after stage winner Rasmussen. He missed the time cut.

Pez: There seem to have been a heck of a lot of crashes.
Dario: That’s the normal story, early in the Tour, people take risks to try and get results. In the mountains a lot of it is down to riders chasing too hard to get back, on descents and just taking it too far.

Pez: Does the lack of a ‘patron’ make for more unpredictable racing?
Dario: In years gone-by, you knew who would take charge, but this year, people are taking chances to attack that maybe they wouldn’t have before.

Pez: Some are saying Rasmussen can win.
Dario: He’s very good in the mountains, he’s been a good climber for several years now – but it’s a long road to Paris. There are two weeks to go and two long time trials, it’s too early for predictions like that. 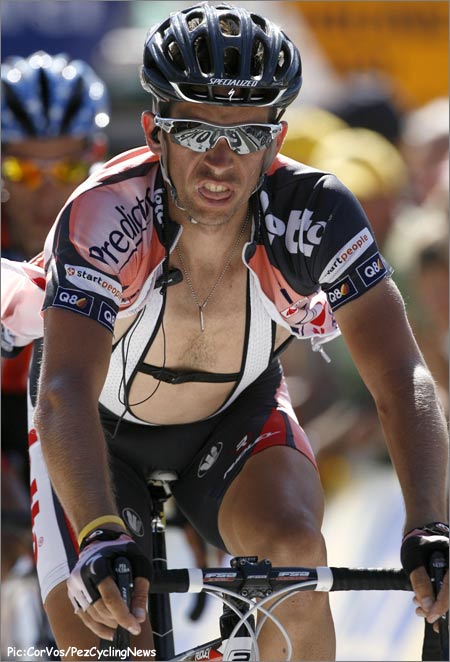 Pez: Has Vinokourov’s chance gone?
Dario: It’s definitely not over for him, he’s a strong rider and not afraid to attack from a long way out. I think it’s too early to write him off.

Pez: And Kloden?
Dario: Despite his injury he’s very strong; I think he could have been with the leaders if he hadn’t ridden for Vino yesterday. I think if they (Astana) didn’t believe Vino could recover then they would have given Kloden his freedom. That may happen, but not until they see if Vino can recover.

Pez: Can Moureau win and send France into raptures?
Dario: It’s certainly possible, he’s one of the strongest and another rider who isn’t afraid to attack from a long way out. 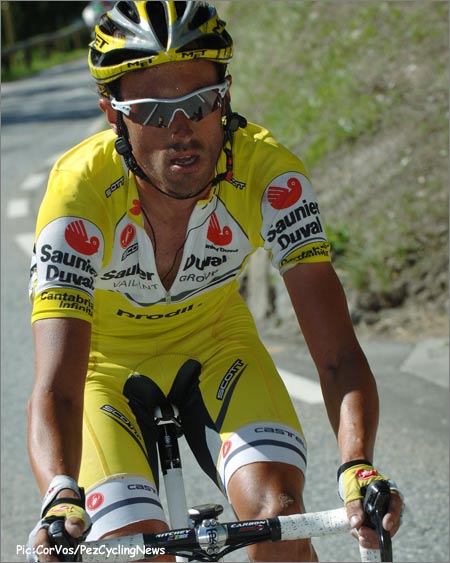 Iban Mayo showed a return to his best form in years, leaving the main group and blitzing to 2nd on stage 8 and now 3rd on GC.

Iban Mayo Interview – Reported by Saunier Duval-Prodir
On the day after his great performance in Tignes, where he ended 2nd for the stage and climbed to 3rd in the GC, Iban Mayo appeared before the press at SAUNIER DUVAL-PRODIRґs headquarters in this Alpine town. Before the conference, the team had a two-hour moderate training session. The head of the yellow squad made the following remarks:

What have been the differences between this edition of the Tour and the previous ones?
Mayo: With regard to training, there havenґt been many. I just tried to do things right so that I was in good shape when I came here. Perhaps I didnґt feel the pressure this time. Taking into account how things had turned out to be in the past few years, I had nothing to lose. My victory at the Giro dґItalia boosted my morale, and some days before this Tour I noticed that I was OK. But youґre never sure until you hit the road and face a race like yesterdayґs. Since the early stages, Iґve ben feeling all right. However, itґs only when you measure yourself up against the big guns that you can tell whether youґre really in good shape or not.

After the bad outcome of recent years in the Tour, did yesterdayґs second taste like victory?
Mayo: Well, Iґm satisfied with the way in which the stage unfolded. After Rasmussen, who had opened a large gap, I was the first to cross the finish line, and I really enjoyed that moment. Being in the spotlight during the Tour, as I had been in the past, was one of my greatest ambitions, and my dream has now come true. The original goal was scoring a win, but once I realised it wouldnґt be possible, I chose to reach the highest spot I could. Will I go for the GC? Well, Iґm not obsessed with it, and Iґm not saying this to shake the pressure off my shoulders, because I donґt really feel like that this year. Quite the contrary: Iґm having a great time. This Tour is different because there is no clear leader so far, which means that any rider feeling well and confident can make it. So yes, in this sense, I am ambitious. The only thing I need is not having any physical problems, because if Iґm fine, then I feel fully confident. But experience has taught me what the Tour is like. Anybody can have a bad day in France.

How did you find the favourites yesterday? Could tomorrow be the right day to rule Vinokourov out?
Mayo: Yesterdayґs final pass was tough but not useful to make a selection. Besides, we were running into the wind, and this helped balance forces. Perhaps I expected Sastre or Menchov to be part of the leading bunch, but the rest were all there -Moreau, Valverde, Contador. These are the big names. As for Vinokourov, itґs quite obvious that he has to be left behind tomorrow, because then thereґs the time-trial for him to make up for losses. He has shown what a great rider he is, so you can never think his chances are over. We could have ruled him out yesterday, but then each rider minded his own business.