The rest day; so there’s time to talk. After we left the CSC press conference and our chat with Stuey, we headed for the Garmin hotel to hear what their DS, Matt White – the man behind Christian Vandevelde’s bid for the podium – had to say.

PEZ: Your first Tour as a DS, Matt.
Matt: Yeah, but I had good work experience at the Giro! We achieved our goal there and won the TTT, so that was perfect preparation for the Tour. We worked hard to win that, a week of specific preparation at Girona, most of the guys live there and we flew the rest in. We trained on the TT bikes, discs, skinsuits, the works and it paid off. Logistically though, the Tour is much easier than the Giro, much better organised.

PEZ: Do you live in Girona too?
Matt: Yeah, I live there with my wife, she’s going to the Olympics, race walking.

PEZ: You coach her, don’t you?
Matt: Yeah, it’s an entirely different sport to running, a whole different technique. She’s a medal contender, she won bronze in Athens.

PEZ: Do you miss competing?
Matt: For sure, this year was the first time in 15 or 16 years that I didn’t have to physically prepare for a season. I used to like November and December when you were getting yourself ready to get back into competition. When I stopped racing, it wasn’t like I was sick of the sport; I still have a lot of enthusiasm and DS is a very hands-on job.

PEZ: Garmin, long term?
Matt: At least until 2010, they were a minor sponsor before and we were talking to them about increasing their commitment. When we won the TTT in the Giro that was a big help and the deal was signed soon after the finish.

PEZ: David Millar – lying low for the final TT, or ‘all for Christian?’
Matt: The number one priority is Christian, we believe that a podium place is certainly achievable. David has been riding in support of Christian at certain key points of stages, in fact he was just telling me how tough it was. He’s been used to leading a team, not working for someone else. If you look at the downloads from the SRM cranks, it’s amazing how many watts a good, hard working domestique burns up.

PEZ: Christian Vandevelde – riding above himself?
Matt: Yeah, we’re pleasantly surprised; before the start we thought maybe top ten, he’s fifth just now, but a podium is possible. He’s having the best season of his life, he started ‘super’ in California and has continued that way. I’ve raced with Christian and he’s always been a real workhorse, but I think a number of factors have come together for him this year. He has the experience of big races, as a domestique but the important thing this year is that his confidence is so much higher and he’s got a team behind him that has 100% confidence in him.

PEZ: How are the Felts standing up to le Tour?
Matt: No problems at all, and the guys have all got a choice of machines. They have their standard road bikes, but also the unpainted machines, which are even lighter, then of course, we have the best of time trial bikes.

PEZ: Surprises in the GC?
Matt: No one that’s there is a surprise, except maybe Kohl. Menchov, Evans, Sastre, the Schlecks, they’re all there, except Valverde. I’m surprised that Cunego hasn’t done more, he’s had better Tours off the back of the Giro, but remember that this year he didn’t ride the Giro to be at his best for the Tour.

PEZ: You’ll be sick of this question (Matt interrupts; “I don’t have to answer it, remember, mate!”) but, Beltran, Duenas, Ricco?
Matt: We’ll have to see how it all ends up, we haven’t seen the result of the test on the second sample, but it’s disappointing to see Triki (Beltran) in that situation. Ricco’s different, I don’t know what planet he’s on. The playing field is definitely more level now, that’s for sure.

PEZ: An ASO Tour, very different from a UCI Tour?
Matt: Not so much, maybe the commisaring, but I’m saying nothing, I’ve had enough fines already!

PEZ: The death of the Pro Tour?
Matt: That was always coming from the minute the other teams didn’t back Unibet at Paris-Nice last year. It’s good for us; we thought that maybe we’d make the Giro this year, but we’d have been sceptical at the start of the year if someone had said we’d do the Tour and Giro. 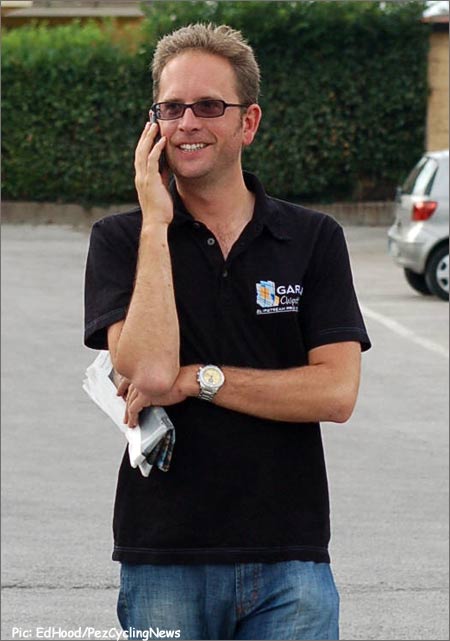 Garmin-Chipotle top man, Jonathan Vaughters has had a lot to smile about of late. VDV lost some time today, but it has still been a banner Tour.

I don’t think that l’Alpe D’Huez stage will be critical. I can tell you CSC ‘s tactics now – Sastre will be sent up the road tomorrow, they have to try and isolate Menchov and Evans, they’re the danger men in the TT; but I don’t think Sastre is strong enough to do the job they need done. Apart from Schleck there’s no one going to have a team mate with them in the finalй. Menchov, Kohl, Evans, Christian – it’s going to be mano а mano.