Interview: As the Vuelta roared into life up in Galicia there were three US teams on the ramp, BMC, Cannondale and Trek – no big deal in this ‘Mondialized’ world of pro cycling. And of course the first US professional team to ride in a Grand Tour was Team 7-Eleven back in 1985, wasn’t it?

That’s what I thought until I was reminded that the Gianni Motta-Linea MD team rode the Giro a year previous to that in 1984. And what’s more, was managed by a female – a certain Robin Morton who’s now a partner in G4Events which promotes fund raising, cycling and running events.

I had to learn more about this one and Robin very kindly agreed to educate me on the first United States professional cycling team participation in a Grand Tour. 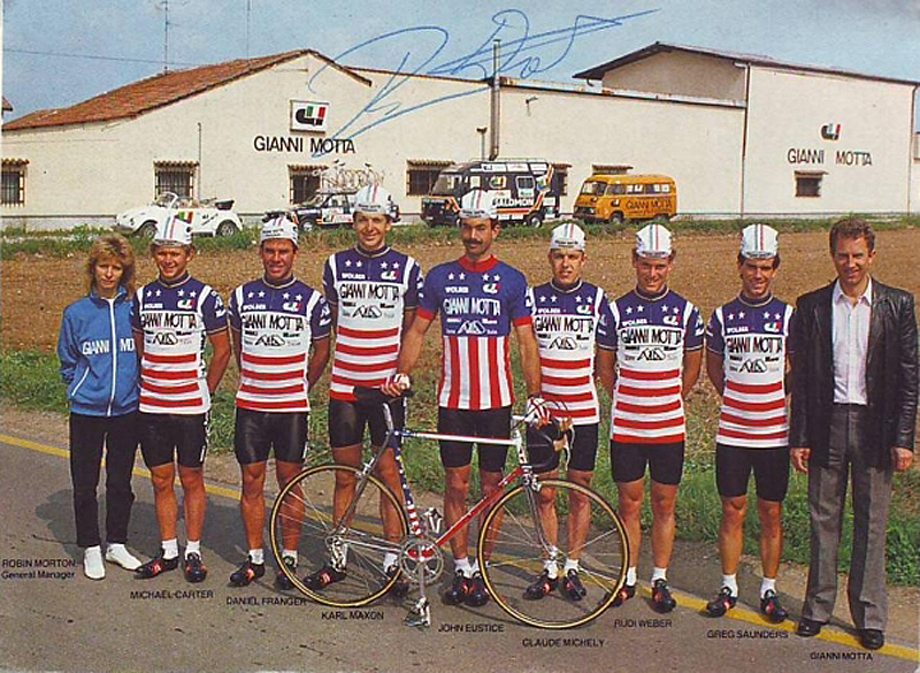 PEZ: Where did the idea come from, Robin – it seems such a leap.
Robin Morton: In late 1982 I met John Eustice through the local bike club (Hill Cycle Penna Bicycle Club) which my husband belonged to and was John’s old club. John was the current USPRO Champion had raced for the Sem France Loire team – with Jonathan Boyer and David Mayer Oakes – and was without a contract for the next year. He wanted to put a US based professional team together. We began to work together and the first team we organized was for Gios. The team raced in the first three day Tour of America organized by Capital Sports Bob Arum. The team was comprised of Eustice, US professional Jeff Rutter, Dag Selander (Bjorn’s dad) and Roger De Vlaeminck.

The team continued to race – without De Vlaeminck adding Australian Ian Jackson – in domestic races for the remainder of 1983 and was sponsored by 7-Up. 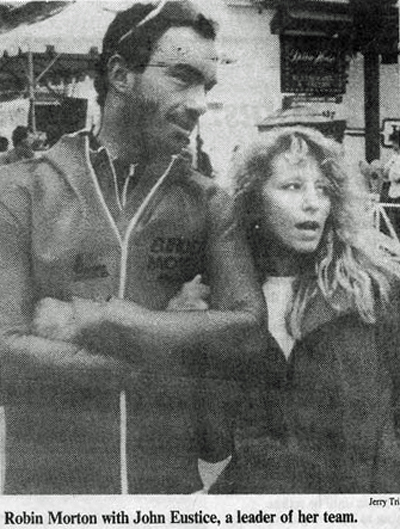 PEZ: Why/how Gianni Motta?
John raced the pre-mondial Tritico (Milano-Torino, Giro del Piemonte and Giro di Lombardia) in 1983 where we met Gianni Motta and began to discuss the idea of having a US professional team in the Giro. Gianni was promoting his bikes in the US and had a US importer based in Tulsa, Oklahoma. We met with Gianni again subsequent to that and finalized the plans. Gianni saw the PR opportunities having the first US team with a National Champion and managed by a woman. 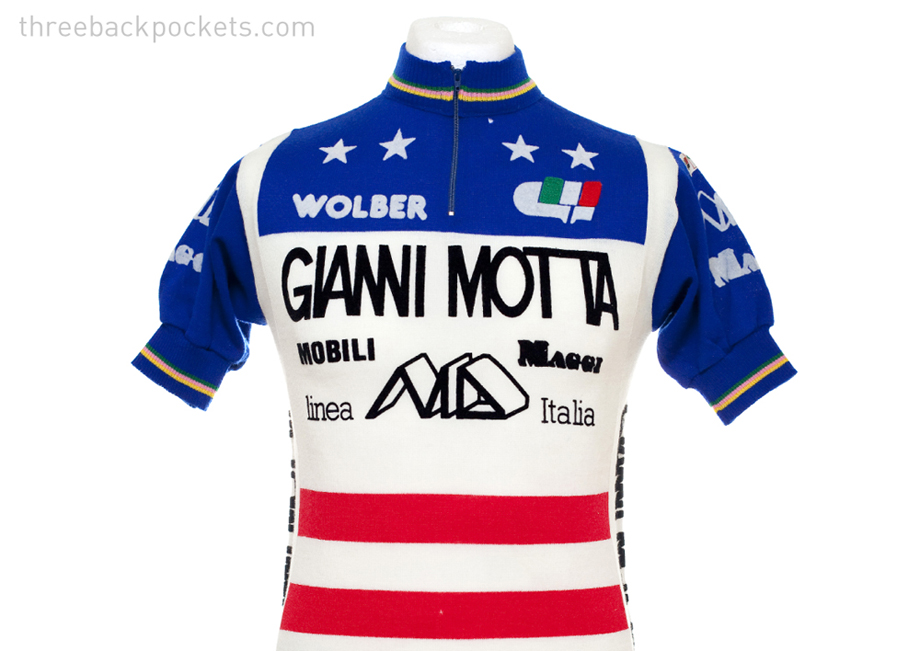 PEZ: How did you go about getting an entry accepted?
Gianni was a celebrity within the cycling world especially in Italy. He won the Giro, the Tour of Switzerland, the Tour of Romandie and was third in the Tour de France. He had been a teammate of Merckx. He was blond, blue eyed and was very gregarious. He approached Vincenzo Torriani who was then Director of the Giro. Torriani met with the team and agreed to our entry. Gianni also sponsored a Spanish pro team.

PEZ: Who were Linea MD?
Linea MD was a co-sponsor and a furniture manufacturer near Lugano

PEZ: How did the riders prepare for the race?
We didn’t have much of a preparation compared to bigger and better funded teams. We were game but a kind of rag-tag bunch. The team did US races the Tour of Texas, and the Tour of Willamette then headed to Italy for the Giro di Puglia, Giro di Trentino, Giro di Toscana and the Giro d’Appennino. When not racing the team followed Motta’s training regime and we’d met him every morning after breakfast and we would follow the team on training ride. 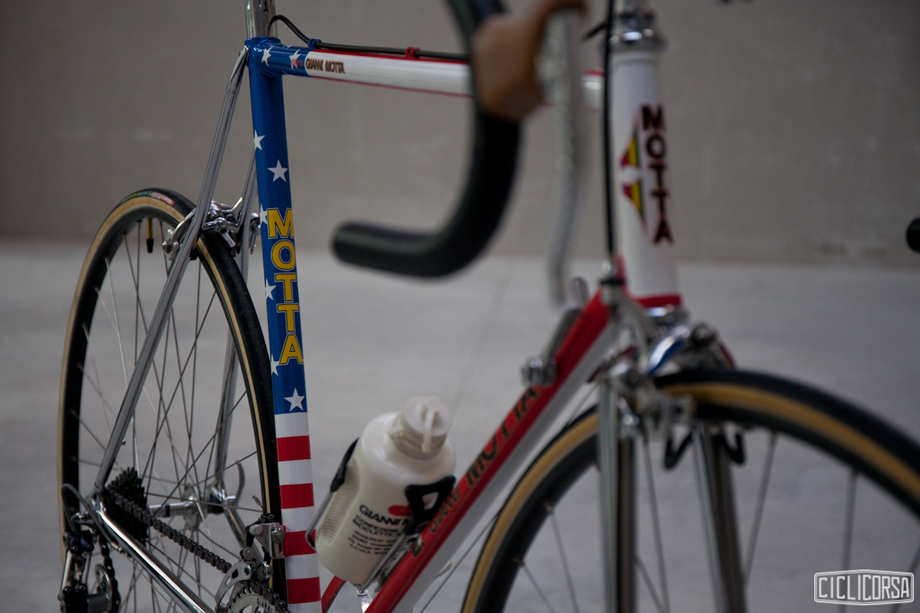 The team bike was a classic

PEZ: Did they bring bikes over from the States or did Motta supply them new bikes for the race?
The team had received custom bikes prior to the Tour of Texas; Motta provided additional equipment when we got to Italy.

PEZ: What about team cars?
Motta/Linea MD provided us with team cars.

PEZ: How did the entry work – did you have to pay a fee? and did that include your hotels?
No fee but the teams paid for hotels; the Giro organization organized the hotels and that process.

PEZ: What was Gianni Motta like to work with?
Again, he was very forward thinking and had a “big personality”. This was something new that no one had ever done before; allowing a woman to manage a team in a Grand Tour. Obviously with any endeavor like this there were issues – we had no template to follow and of course there were some language and cultural difficulties to overcome.

Karl Maxon was the hero of the Giro stage 4

PEZ: What we’re your best results?
Karl Maxon got 13th in the final time trial against Moser and Fignon. Also Maxon did a 213km solo breakaway from Bologna to Numana and was only caught at the end of the race. Karl was a great rider; had come from the running world (steeplechase). He went on to ride for the Spanish Fagor team. We also had Mike Carter on the team who was a neo-pro but was a great climber. He was a favorite of Motta.

PEZ: I believe you had disputes about money with the sponsors?
Yes, there were issues with money. We (my husband and I) ended up footing the bill for a number of things (travel and housing) for the team both in 84 and 85. 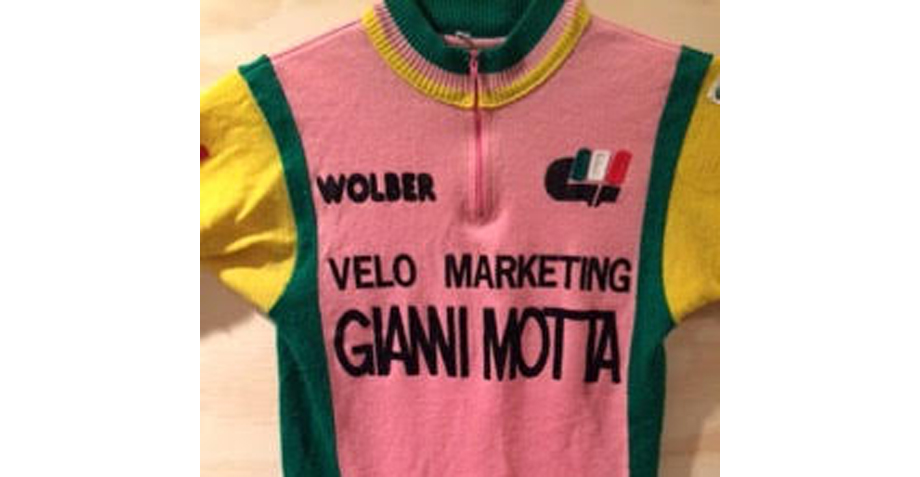 The original jersey was also a classic

PEZ: What was the lowest point of the adventure?
As really the only women in the entire Giro entourage it was challenging at times. It was different (culturally) to what I was used to and obviously I wasn’t someone who was willing to sit on the sidelines.

PEZ: And the highest?
The fact that all the US riders finished the Giro and that we actually made it to the finish!

PEZ: Did the prize money come to the team OK?
I actually don’t recall but I don’t think there was a problem with that. 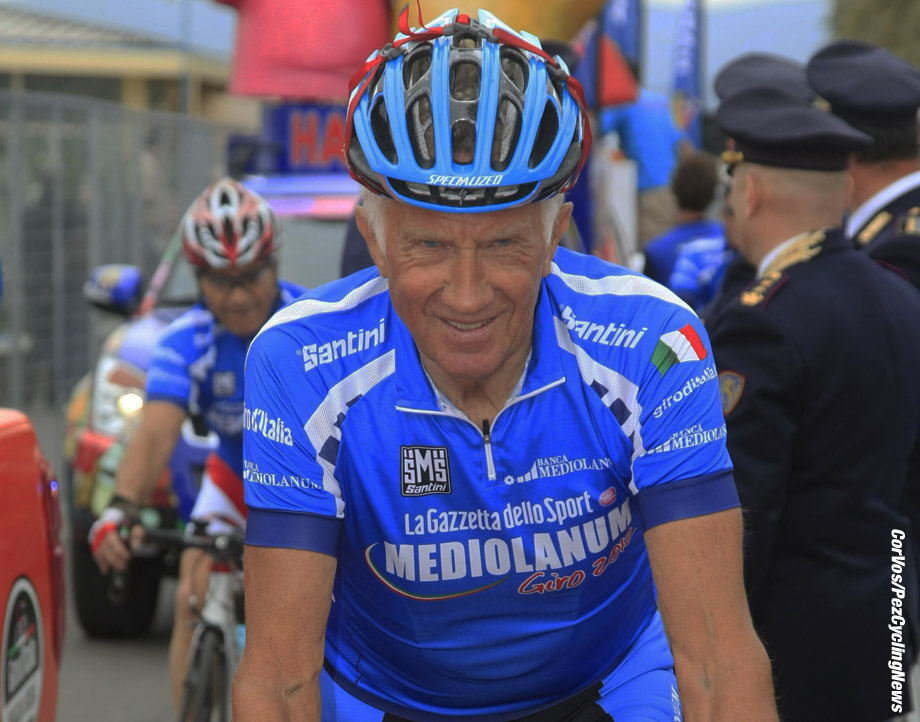 PEZ: Why go to the Vuelta the next year – your foot was well in the door at the Giro.
We were no longer sponsored by Motta and in 1985 we were sponsored by Benotto; they had a big presence in Spain. There was an opportunity that came thru USPRO (Jack Simes) at the time for an American team to race in the Vuelta. We were also sponsored by Xerox (Europe).

PEZ: The Vuelta ’85 – what was it like getting an entry for that?
It came thru our pro Federation – it was an invitation from the Vuelta. The only other professionally registered US team at the time was 7-11 and then they were focusing their efforts in Italy. The Vuelta was in April then and 7-11 couldn’t do the Vuelta and the Giro back to back. We raced in France as well (Dauphine, Midi Libre, Tour d’l’Aude) and the RCN Tour of Colombia

PEZ: I believe ‎that the Vuelta could be pretty ‘basic’ back then?
It was so hard and a really rugged event! There was much more climbing than in the Giro. Some of the accommodations (when we were in remote towns) were very scary and beyond basic! In ’85 The race was won by Pedro Delgado but Robert Millar had been in the lead and it seemed pretty likely he would win. The story is that there was a combine among the Spanish teams to help Delgado win. 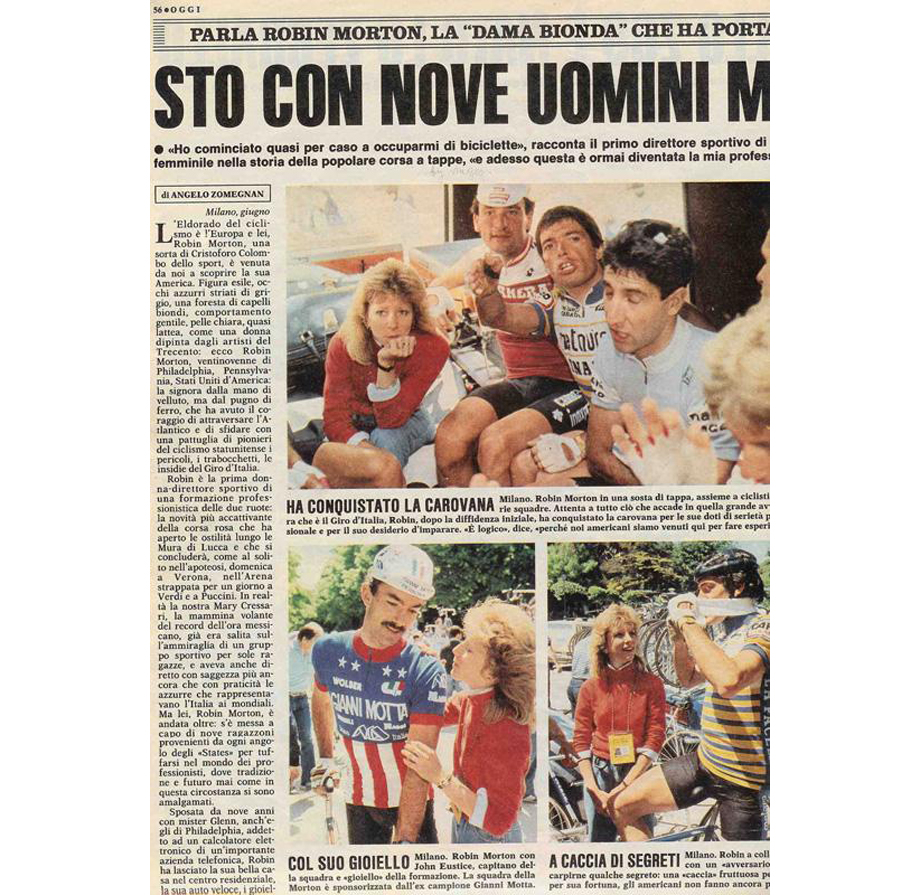 Robin Morton was popular with the Italian press

PEZ: If you were to do it again, what would be different?
Being underfunded and inexperienced made everything difficult. However it was such a unique and special experience I don’t think I would change anything.

PEZ: Why do you think that it’s 7-11 which history remembers as the ‘ground breaker’ rather than your Gianni Motta-Linea MD?
We didn’t have a big budget or “name” riders like Phinney and Heiden. Our team (as it was) did not continue; the 7-11 entity was around for a long time. Southland put a lot of resources and PR behind the team. The Motta team is remembered in Italy – but not so much in the US.

# Quite a tale; so next time someone starts to tell you about 7-eleven being the trail blazers. . .