In this photo provided by PhotoSport International shows

Retro Rider Interview: In the 80s there were Irishmen making it big in the European Pro scene; Sean Kelly, Steven Roche, Martin Early and Paul Kimmage. There was also a man from Dublin who headed west to the US, instead of east to Europe, John Brady. Ed Hood caught up with the ex-7-Eleven (and many other US teams) rider to hear his reminisces, and as always, a Bob Roll story. 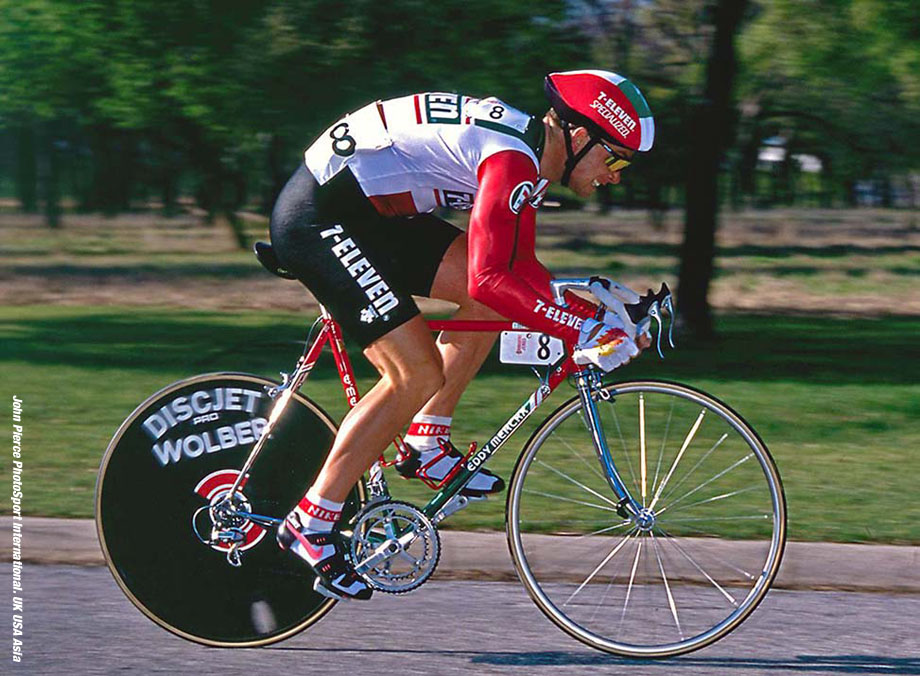 Team 7-eleven season 1989 was pretty cosmo; US riders obviously, like Frankie Andreu and Andy Hampsten; a Kiwi, Nathan Dahlberg; a Norwegian, Dag-Otto Lauritzen; a couple of Canadians, Alex Stieda and Brian Walton; an Austrian, Gerhard Zadrobilek and even an Irishman – Mr. John Brady.

PEZ: What was your background on the Emerald Isle, John?
John Brady: I won a lot of track races in Ireland; I was a national champion as a schoolboy and junior. They were different times back in Ireland with rival federations wrangling with each other. 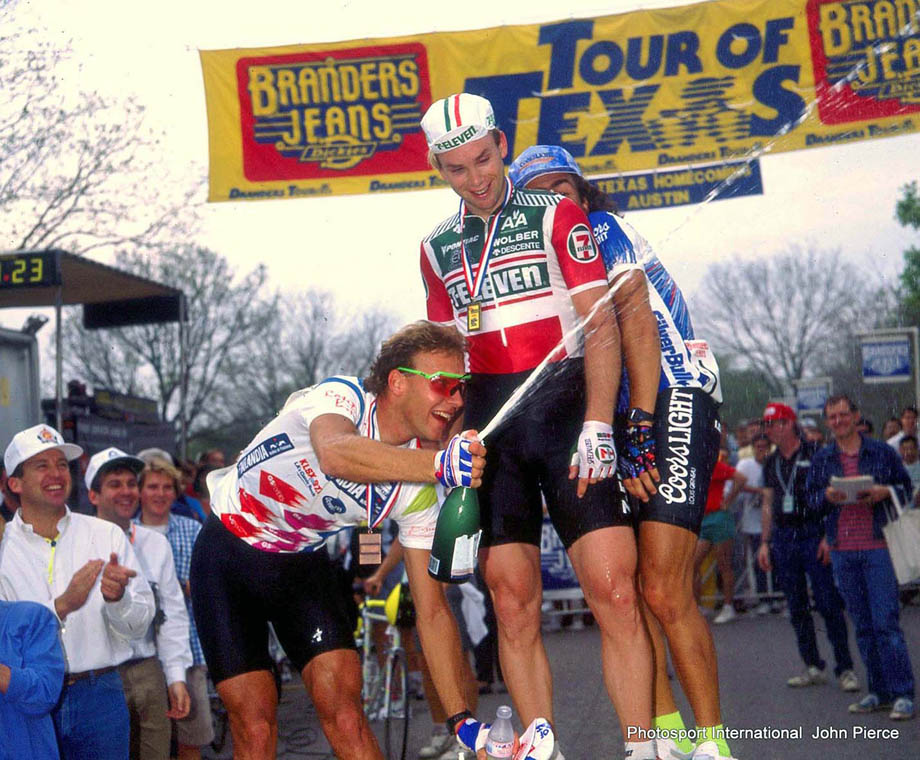 PEZ: Why the US and not Europe to pursue your cycling dreams?
There was a big gap between Ireland and the UK and then between the UK and the continent. I was a pee-ed off with racing Ireland, I was 18 years-old and winning senior races; the US seemed exotic, I’d heard that the races were short and fast, I had a good sprint so it was the UK crits, the Belgian kermises or the US crits – I chose the USA. It was faster in the US than in Ireland, there were guys like Lemond and Phinney around, it was more like track racing, the surfaces were good and so was the weather, I needed an adjustment period but I scraped from one race to the next, it kept me hungry and gradually I improved.

PEZ: Where were you based?
Los Angeles originally then Sacramento and finally North Carolina – there weren’t so many races but nowhere was more than a four hour plane trip away. 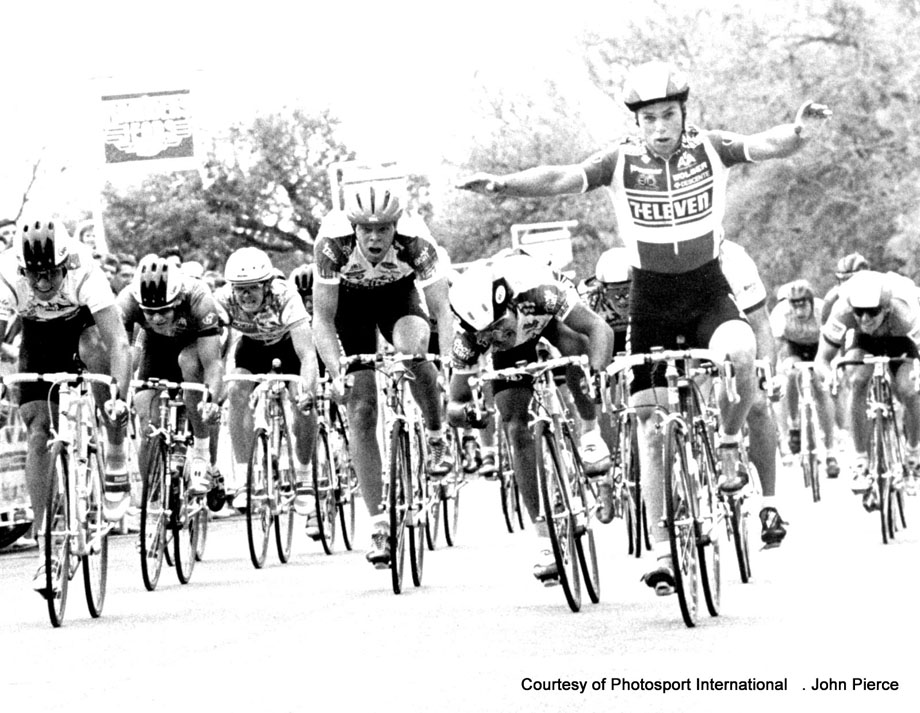 PEZ: How did you get the 7-eleven ride?
Because I was good! I caused a bit of a shock by showing up and winning and winning against the 7-eleven and Schwinn guys. I won the first race of the ’87 season and maintained a good level through ’87 and ’88 – I even won a few solo. I had other offers but Tom Schuler’s offer to ride for 7-eleven was the one I accepted for 1989; for a 21 year-old Irish guy to be in that group of riders was fantastic. My program was mainly centered around the big US crits, but I rode the Etoile des Beseges and Tour of Holland; for a working class guy from Dublin to be doing that – I felt like a star!

PEZ: Why leave 7-eleven for season ‘91?
I got a good offer from Alpine Colorado-Scott, it was Mike Neel’s team and we had proper guys on board like Andy Paulin and Alan McCormack. Mike had all the contacts from his time in Italy and the plan was for us to ride the Giro. But then the Gulf war came along and the guy who was financing the team pulled out. 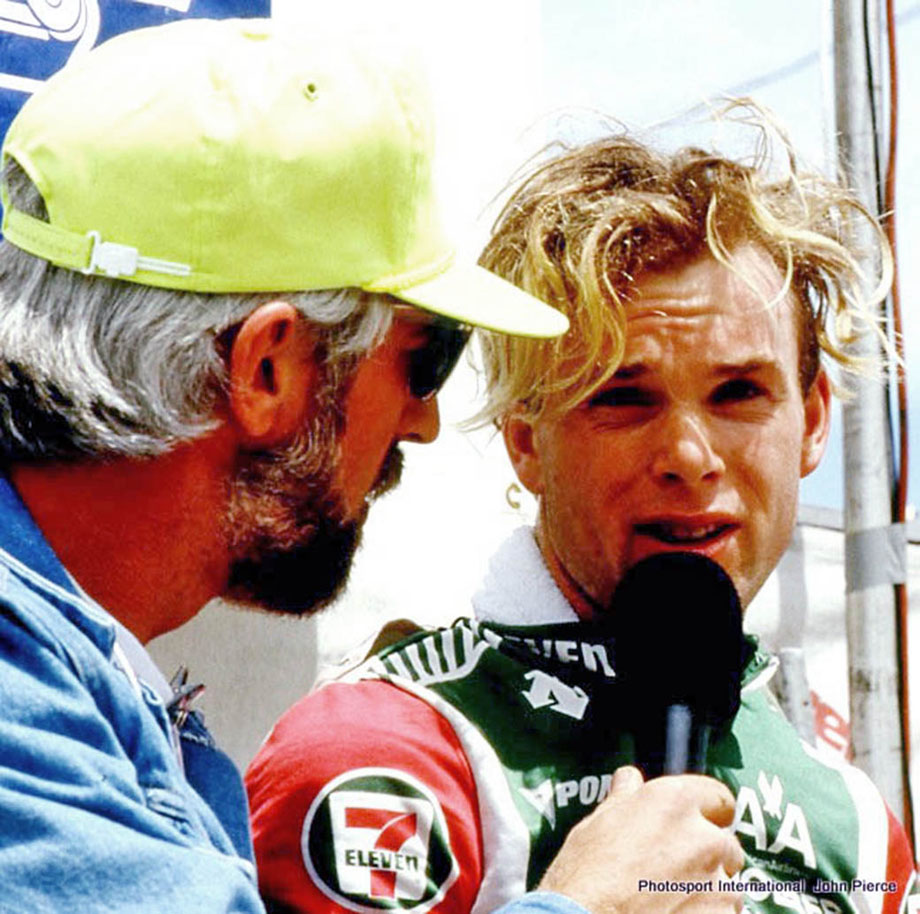 PEZ: Then Spago-Nutra Sweet for ’92?
Mike Neel put that team together too; we had good guys like Scott McKinley and Nathan Dahlberg and again the plan was to ride the Giro. Mike had organized Hoonved to sponsor us over in Italy but we couldn’t get into the Giro – we did do the Tour de Trump but I didn’t race as much in ’92 as I had in the past.

PEZ: The ’93 season was Spago-Rossin and Simply Fit.
Simply Fit was a local pro team in South California; I was supposed to ride for Spago-Rossin but it fell through. When I look back I never had the concept of a ‘career’ in cycling, I was too much in thrall of the USA and to the cult of cycling. And I didn’t really have the option of going to Europe. 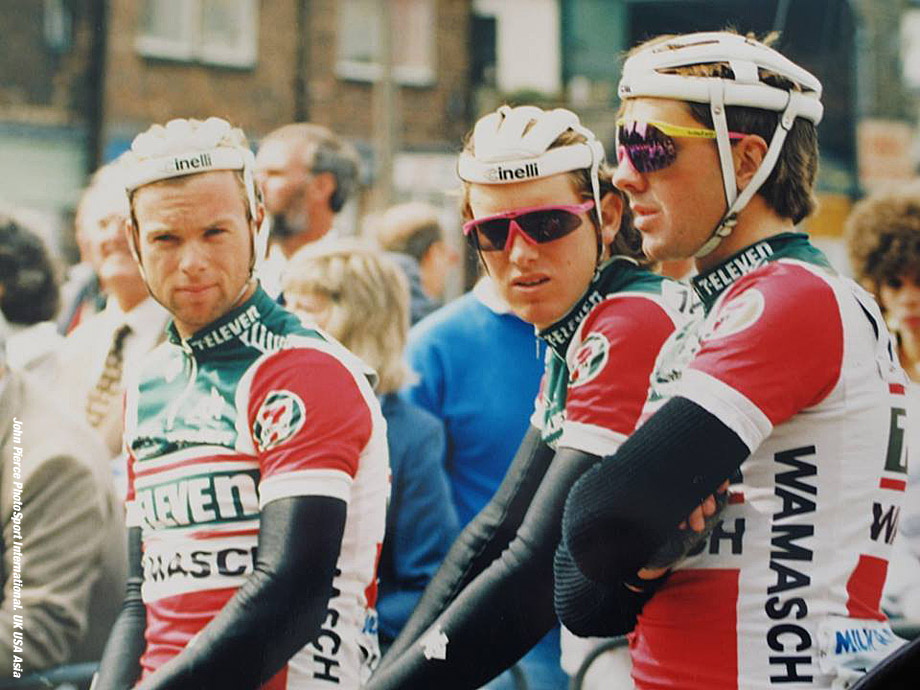 PEZ: Then it was Guiltless Gourmet for ’94?
I couldn’t get a good ride that year, I was freelancing, mercenary – like I said I didn’t have proper career perspective.

PEZ: It was ’94 you had the really bad crash, wasn’t it?
Yeah, the Manhattan Beach Grand Prix, a really big crit, televised by ESPN. It was two long straights with a bend at each end, a 100 kilometer race and like any sprinter I was waiting for the finale. Into the last bend I was third wheel behind Scott McKinley and Roberto Gaggioli who was coming back having dropped McKinley off, he was taking me into the barriers so I put a hand on his hip, not in a malicious way, just to say; ‘I’m here.’ His response was to punch me full in the face – but I still passed everyone except McKinley. After the line I grabbed Gaggioli and told him never to touch me again, this time he kicked my handlebars I came down hard with the guy behind me riding into me as I hit the deck. My femur was broken in six places and an artery was severed, I have six pounds of metal in my leg which still affects me to this day. It took a long time to recover, originally I was told I wouldn’t be able to walk or ride a bike. I got back to winning, I was still producing the power but I had problems when I trained hard. When you’re a winning 21 year-old, beating guys in their late 20’s that’s an attractive proposition for a sponsor – when you’re 27 you’re expected to win. And the market place is small, there a thousand guys after your place in the bunch. I stuck around in the US after I quit racing then moved to Europe before I returned to Ireland. 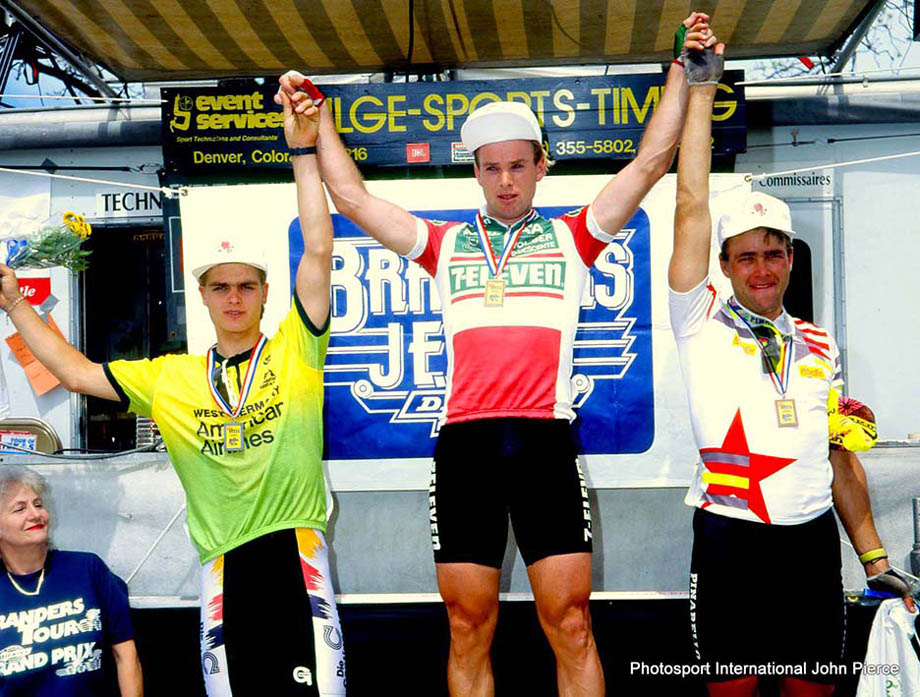 PEZ: How many races did you win and which are you most proud of?
I had around 130 wins with 65/70% of those at full pro level; you could race against the amateurs in certain events back then. The stages I won in the Tour of Texas were very satisfying; I was against the best US guys there. And the stage I won in Venezuela in the Tour of the Americas in 1990 was one I’m proud of. I’d had an ear infection and on the second last stage there was this 20 mile climb and I was going to climb off but the guys in the team car wouldn’t let me, they said; ‘tomorrow is a stage for you!’ The next day the guys were asking me about organizing the lead out but I told them not to bother, just leave me to my own devices. Coming into the finale I was in the top seven or eight and at the line somehow I won it, beating Malcolm Elliott and Johan Museeuw – very satisfying. People ask about racing in the US, it was just ‘different’ – in the crits the US guys were very fast; I remember seeing the great Phil Anderson get sixth in the Beverley Hills Crit and thinking; “good ride !” in that company. If those guys went to Europe they get hammered but in a crit environment they were very good at what they did.

PEZ: And you’ve ridden a few races in Ireland, these last few years?
Yeah, just to keep my figure! It’s good to enjoy it again. But the current marketing around cycling intrigues me; so many lies about what you have to have to race – Watts? Power meters? Crazy priced machines? It’s all about a guy getting on a bike and riding it! 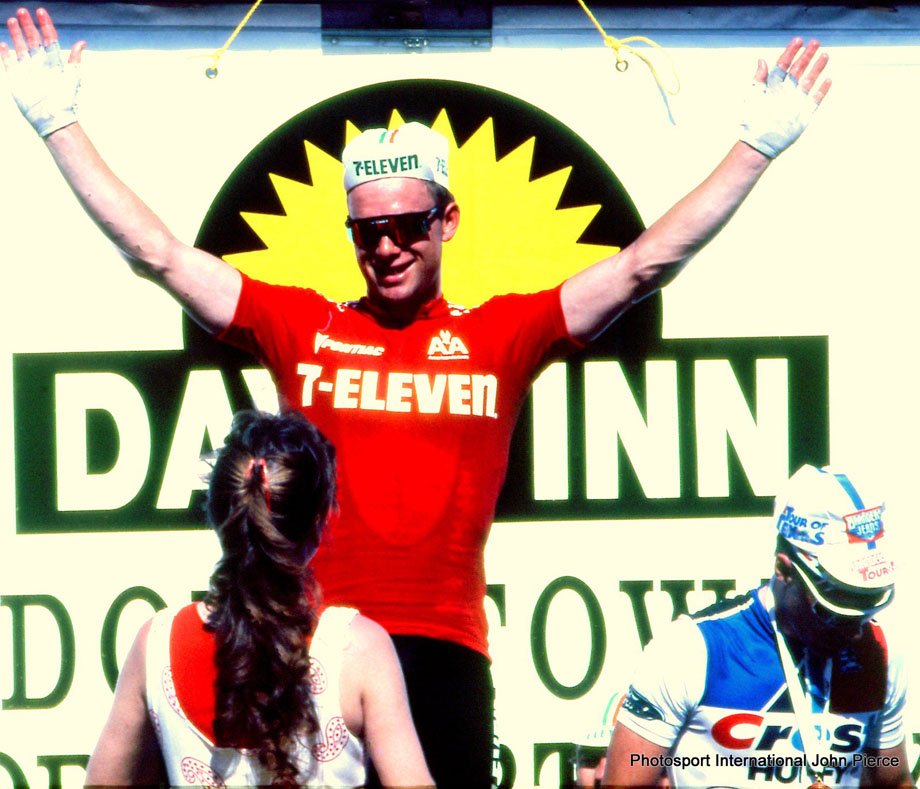 PEZ: 7-eleven; we must have a Bob Roll story before we close?
Bob and I were as different as apples and oranges; he was so full of mischief – we were rooming together at a training camp in Santa Barbara, Bob walks in and empties his suitcase on the floor – he explains that it’s the best way to be able to find his stuff easily. All I could think about was all the stuff that had been on that floor before we were in the room, cigarette ash, cocaine and whatever else.

We’re in the Tour of Holland and it’s a sprinters’ stage so everyone is kinda screwing around in the peloton; next thing, Bob takes off up the road. A couple of minutes he comes back the other way and rides straight through the middle of the peloton the wrong way – naked! 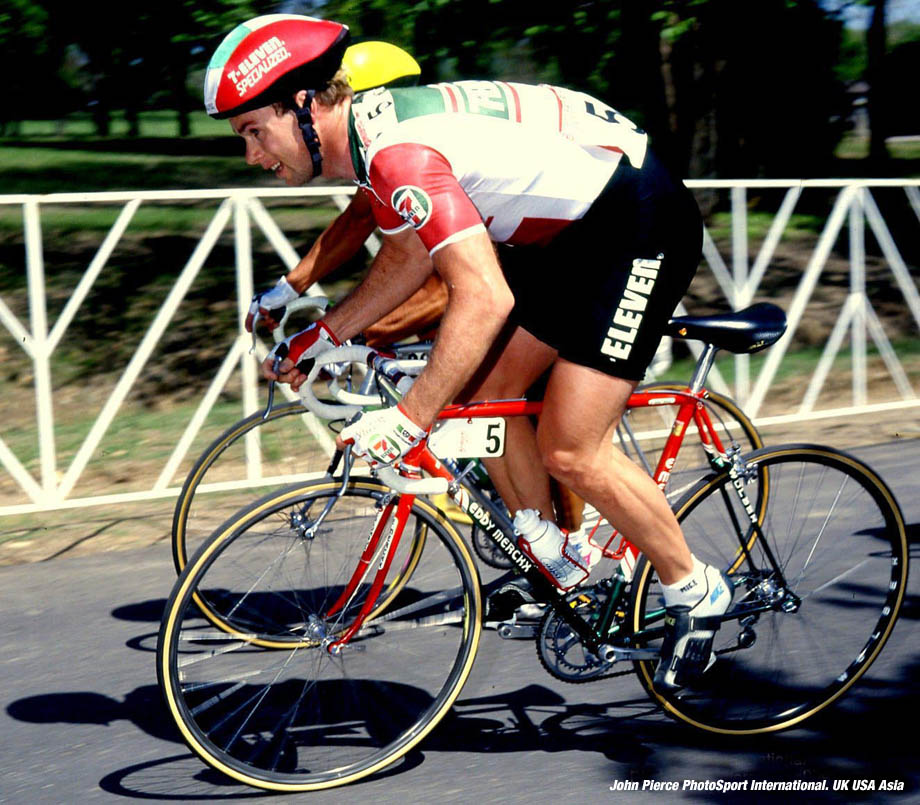 We’re at the airport after the Tour of Sicily and Bob decides to get his roller blades out and blade round the airport – but not content with that he decides to roller blade on the baggage carousels. All of a sudden there are these 18 year-old cops with Uzis appearing and Bobs up there shouting at them, “relax!” 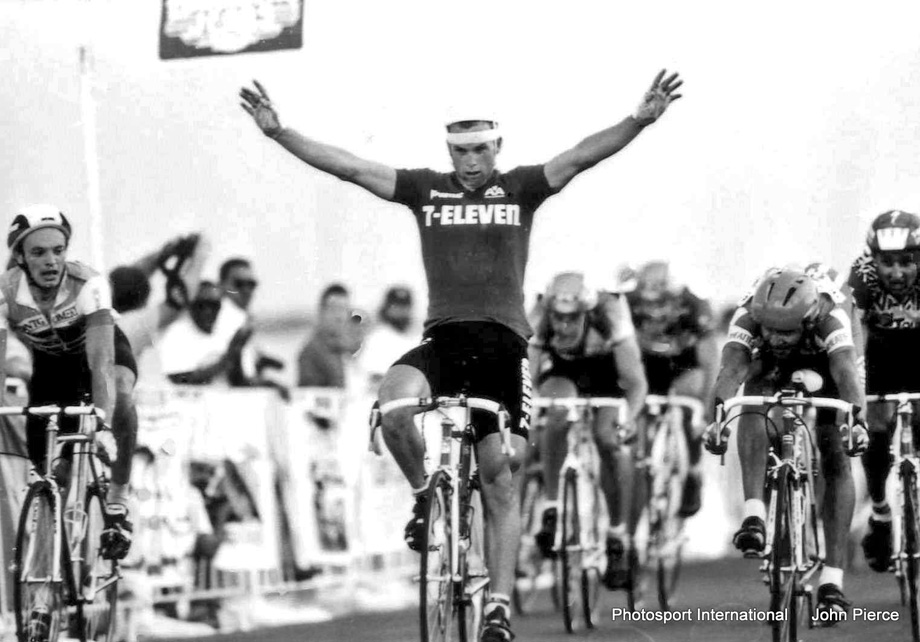 PEZ: And if you had your time over?
It’s easy to say now but I was caught up with distractions in the US and to be good you have to zone in.
I’d advise young riders to get themselves a manager, someone to do the ‘weighing and measuring’ on what they’re doing with their career. And the other mistake I made was not to view it as a career – perhaps if I’d done that. . . 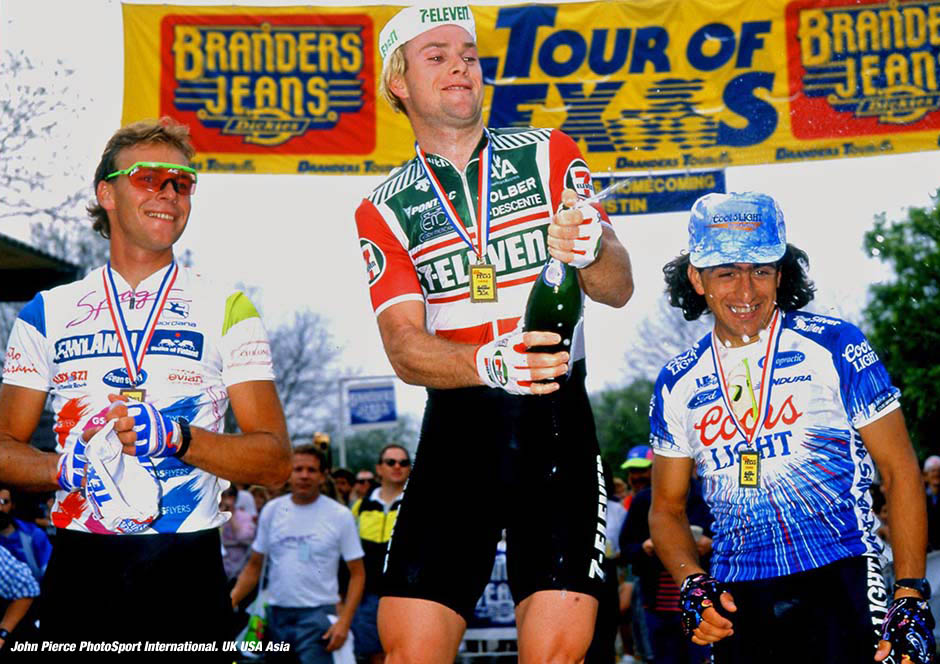 Turkish No.4 For Sam Bennett!

Last but not least, Team BAHRAIN MERIDA lineup for Guangxi