Interview: Next in line for our retro US interviews is Andy Paulin, a rider who could have made it big in Europe, but turned his back on a 7-Eleven contract offer. As he said: ‘I was happy being a big dog here in the US. No regrets because I raised a family and was blessed with two wonderful daughters.’ He was happy to watch those guys suffer in Europe. Ed hood caught up with Paulin to get the full story. 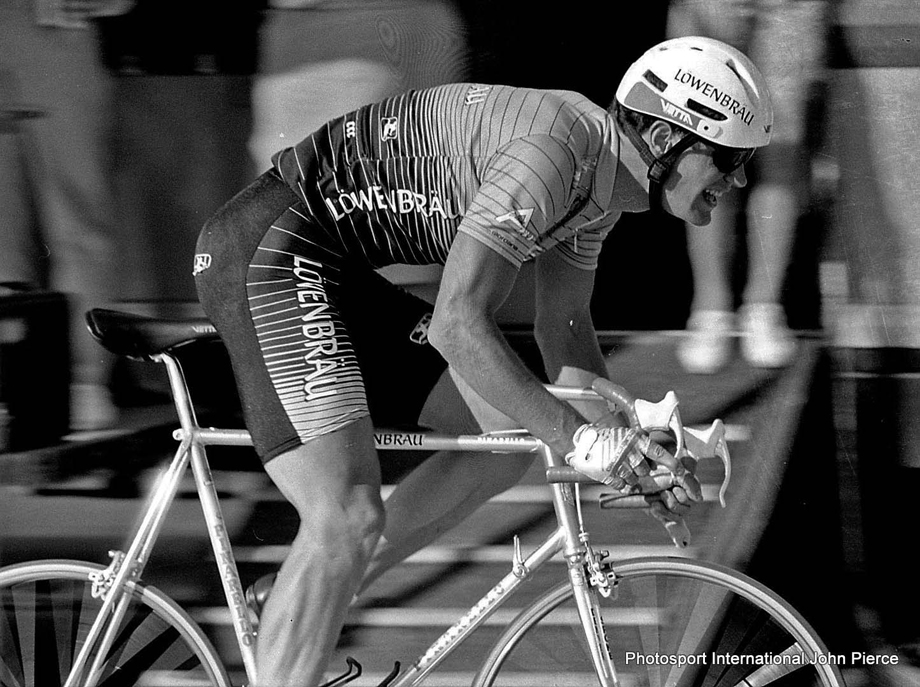 With our recent Roy Knickman being well received we thought we’d track down some more of those ‘80’s cult riders – like this dude, Mr. Andy Paulin. A Pan Am champion, Olympian and Peace Race survivor – and as you’ll read, he’s a man who tells it like it is. . .

PEZ: How did you get into the sport, Andy?
Andy Paulin: My dad bought me a Hetchins touring bike when I was 13 years-old when we were touring through Europe. I always loved bikes and had many of them as I grew up in Palo Alto California. I was a soccer player in college, and was injured with a groin pull. I started riding my Masi for rehab, and met some local collegiate racers who talked me into doing some collegiate races. I took second place in my first race and was hooked. I never returned to soccer. 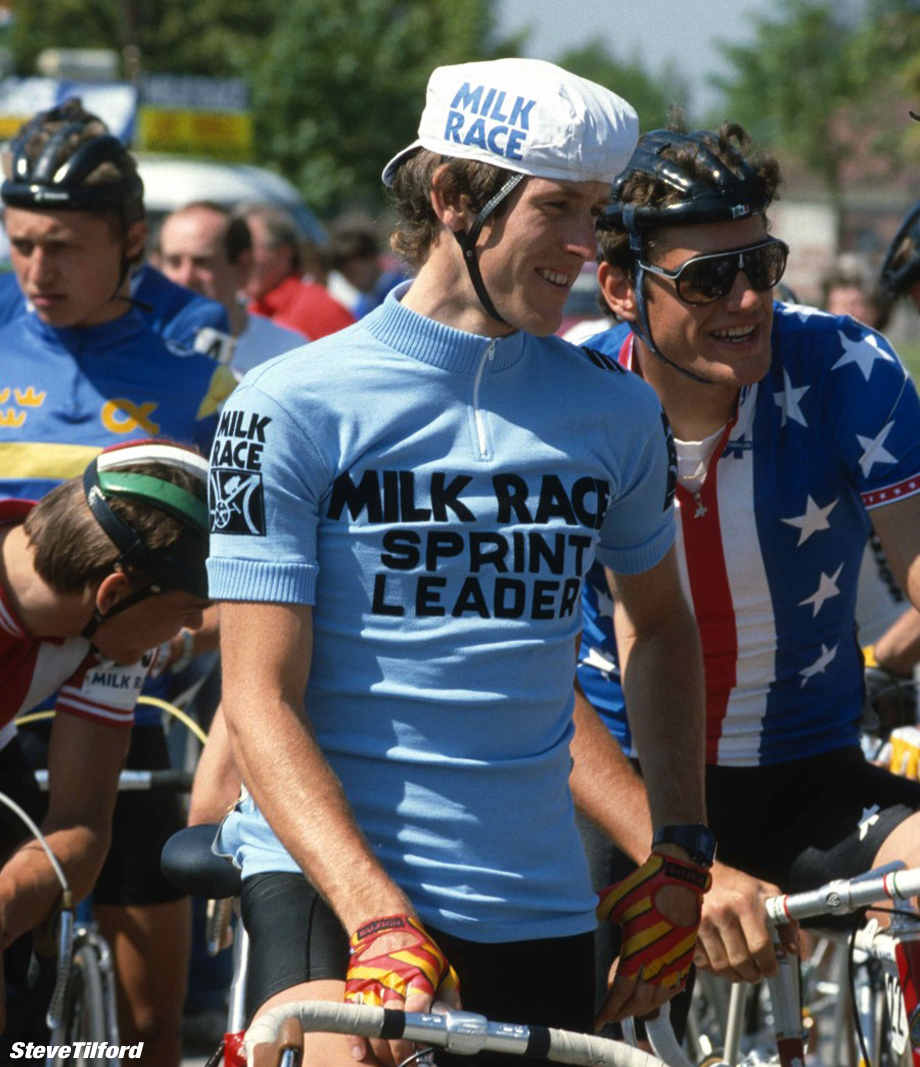 Paulin, with Steve Tilford, before he crashed out of the Milk Race

PEZ: You rode the Milk Race in England in 1985 and got third on a stage – what are your memories of that race?
I was super fit and had just place fifth place in GC the tour of Baja, when I was selected for that team. It was a composite team of US riders, with no cohesion or loyalty to one another. I took a flyer off the front and was going to win the stage when Jeff Pierce (my team mate) chased me down with a Czechoslovakian rider on his wheel, they caught me with about 25 meters to the line; the Czech rider easily came around us both after being towed all the way up to me. Steve Tilford watched the whole move and was totally disgusted with Pierce. In the next day or so I was chasing down a break descending at about 80 km per hour when a car pulled out onto the course in front of me. That was the end of the race for me. I had multiple fractures, bruises, and a severe concussion. I didn’t race for four months, until I raced in Australia at the end of the season at the Commonwealth Cycling Classic, where I won three stages and was third in the GC. 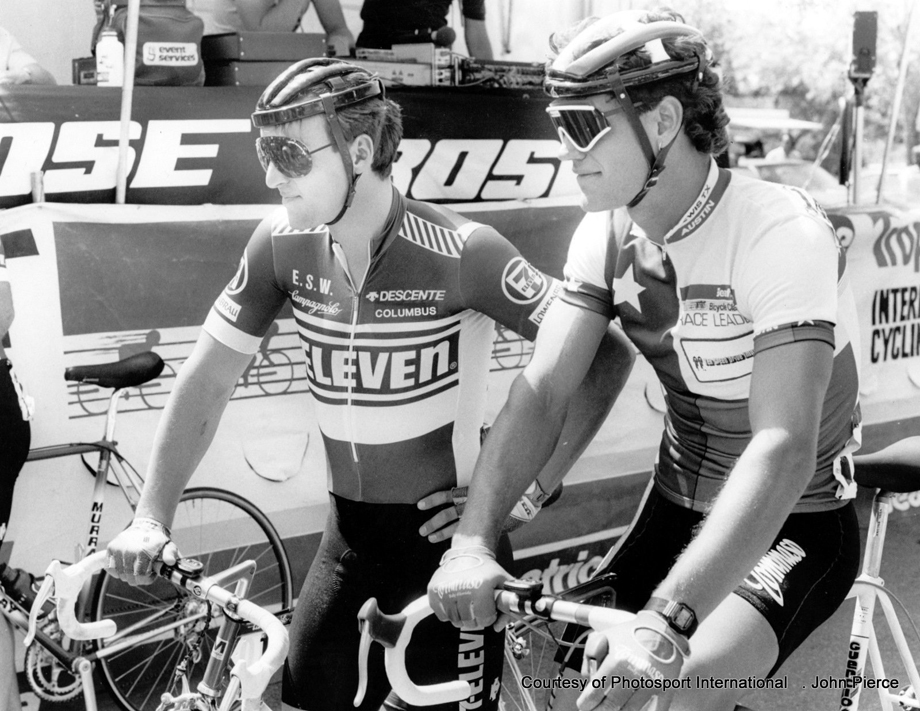 PEZ: Season ’86 was a good one for you, including the prologue in Beatrice – you were a good prologue rider. . .
I did a lot of time trailing in college in Chico California. We had 10 mile flat course along the river that we did every Thursday night. I learned how to gauge my efforts, and had some great mentoring with Chico Velo, the local team. Season ‘86 was the beginning of the age of funny bikes. Eddie B insisted that I ride a bike that was ridden by two other riders in the prologue at Beatrice. They barely had the bike ready for me at the start. I remember just laughing at the comedy of it all and just decided to relax and do my best. I think I was first over Jesper Skibby by 15 seconds.

PEZ: I heard a story that Eddie B heard about you and flew out to see you – then immediately put you in the national TTT squad?
A good story but not true. I showed up at the Pan Am Trials in Texas in ‘83 as an unknown with no sponsors, and placed fifth to the surprise of Eddie B and his 18 National team riders. I was then paired with a rider who was way down the ranks for the two man TT, we took third , then were paired with two more riders and we took second in the four man TTT. Eddie figured I was the common denominator in the successes and said I wouldn’t be able to do the Pan Am games but wanted to send me the William Tell as preparation for the World Championships in Zurich in ‘83. I also was sent to race in Australia and to Chile for stage races at the end of the year because Eddie wanted me to gain experience for the Olympics the next year. He liked big riders and I was 200 lbs and 6’ 5” – I was lucky to have him as a coach.

PEZ: Pan Am Games TTT gold in ’87 with Bostick, Frey and Hegg – all strong guys. . .
Yes, that was a hot day on the Indianapolis 500 speedway; it was a relatively easy win, having the absence of European teams. 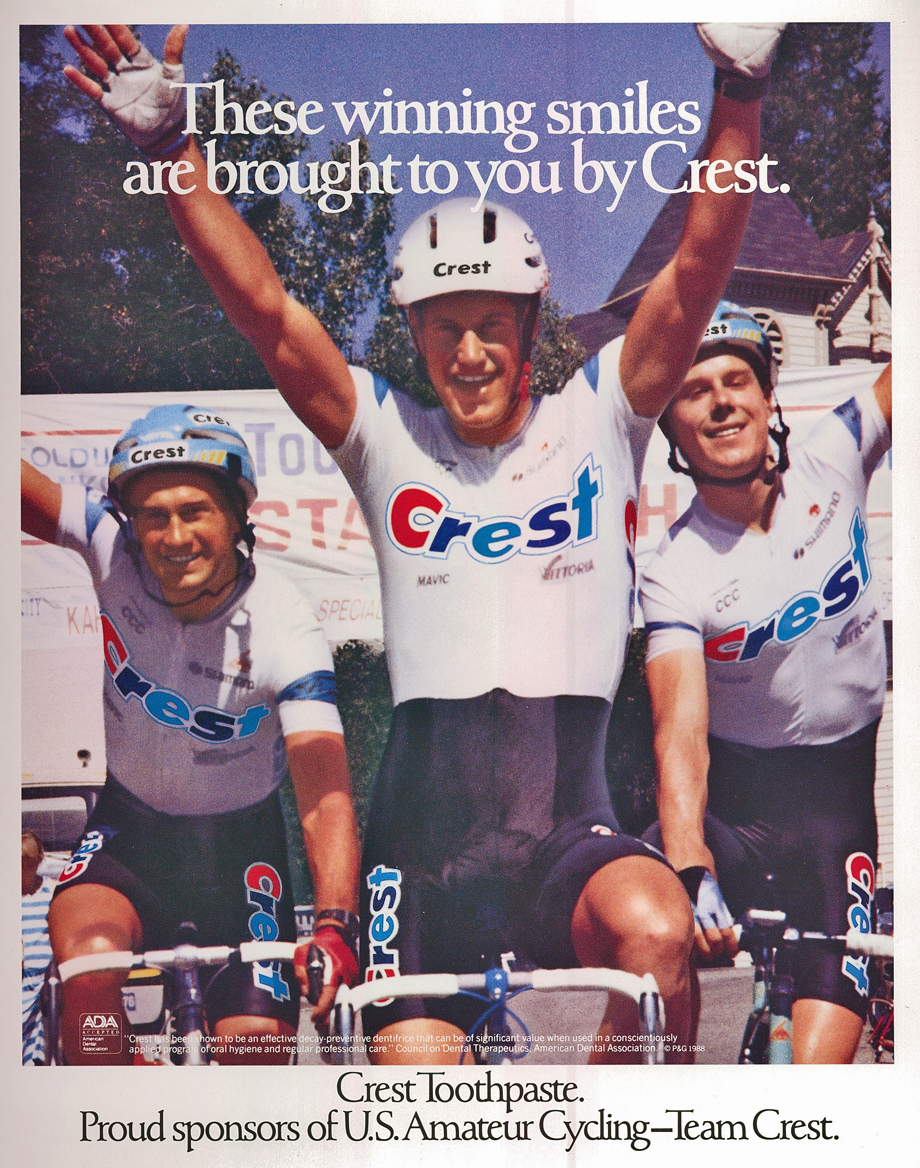 PEZ: Crest for 1988 what was that team like?
I wasn’t allowed to be the team leader, and had to be a supporting rider a lot of the time – there was a lot of talent and we shared the success.

PEZ: You had a good Redlands in ’88; Alex Grewal in the team – ‎ memories of that?
I could have won the overall in that race but Alexi was Len Pettyjohn’s favorite, so despite being in the leader’s jersey I had to work for him when he went off the front. We shut things down without bridging up to him. I won the final stage but had to settle for third place on GC to Len’s Golden Boy and his breakaway companion. It was all good – that’s racing. 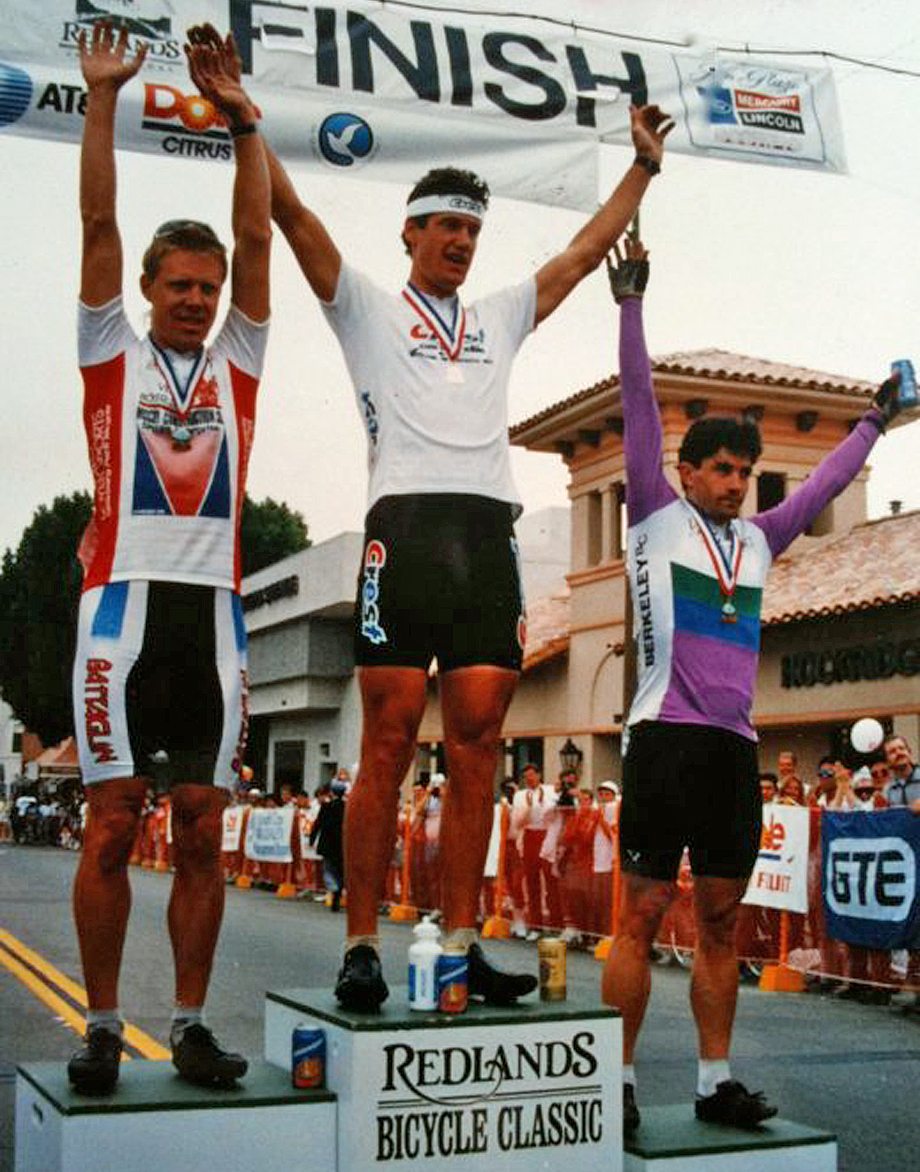 PEZ: Top 10 in the ’88 Olympic TTT – tell us about that, please.
We had a horrible race at the Olympics; Eddie B was replaced with a football coach named Mark Hodges, who was a complete idiot. He said we had to do all our preparation on the West coast of US, because there was nowhere to ride bikes in Seoul so he over-raced us in the US and then got us there just four days before our event, we were trashed, and jet lagged. We had done times in practice that would have gotten us a medal had we been prepared right. The whole trials and coaching staff were in disarray. 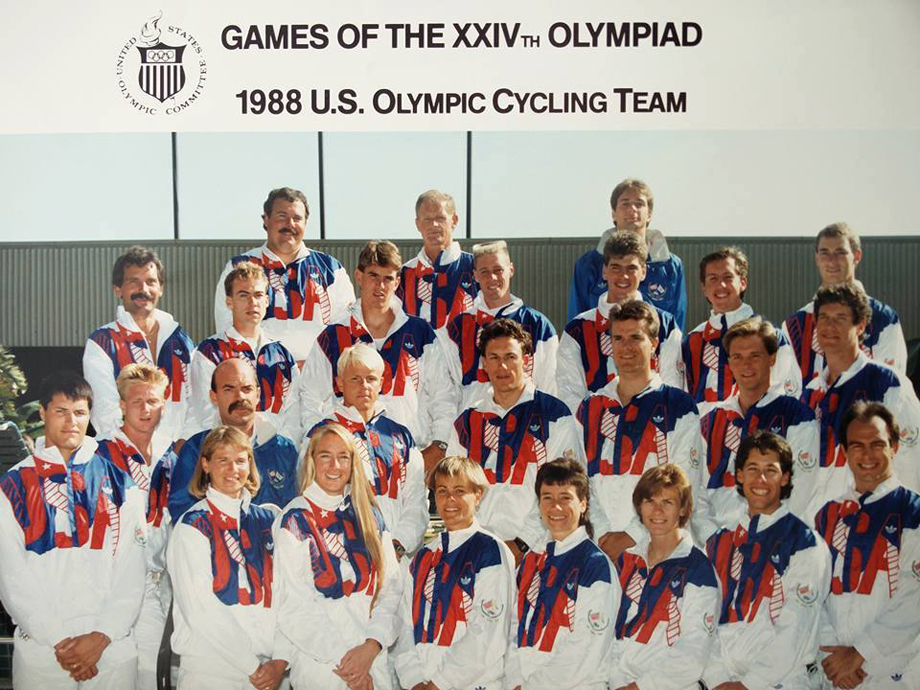 PEZ: The ‎Coors team for ’89 – a big name team but that year seemed quiet for you?
Yes, we had a lot of big names and a mixed squad of US and Euro riders, including Greg Lemond for the big races. I was expected to ride support most of the time. It was turning into a job and wasn’t as fun as I wanted it to be.

PEZ: But’90 was a good year with Coors though.
It’s all a blur now, I was starting to get used to racing as a job, and it was hard racing for guys with big egos. Still it was doing what I loved and I was getting paid for it. Good enough to buy a home in California before prices went sky high with the Tech boom. 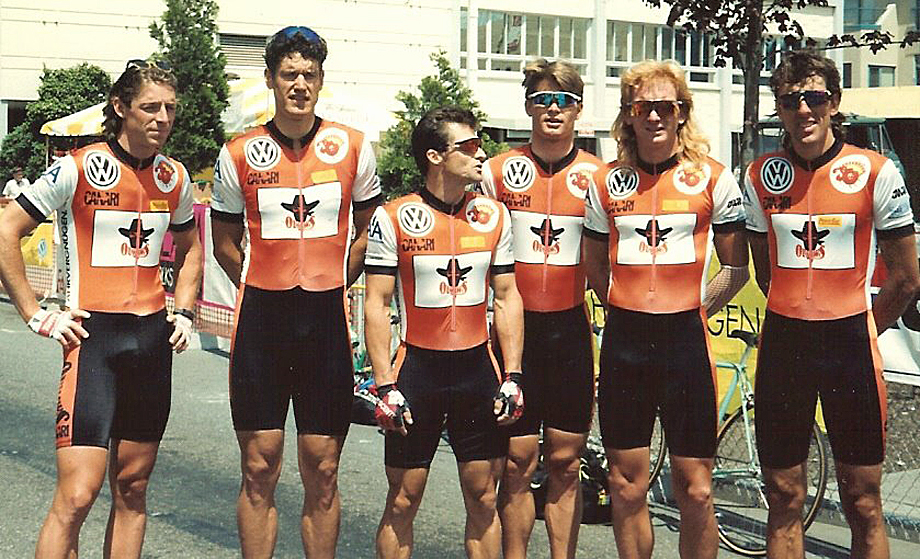 PEZ: The ‘Outlaws’ team for 1991.
Yes, I got ‘most valuable rider of the year’ that year, thanks to Franco Harris (of Pittsburg Stealer fame) watching me get up from a crash with a shredded skin suit, and race to secure enough points to win.

PEZ: Did you ever think about being a Euro Dog?
Jim Ochowitz offered me a spot on the 7-eleven team when they first went to Europe, but I didn’t trust him because he had screwed me over twice before in negotiations so I was happy being a big dog here in the US. No regrets because I raised a family and was blessed with two wonderful daughters. I watched those guys suffer in Europe. 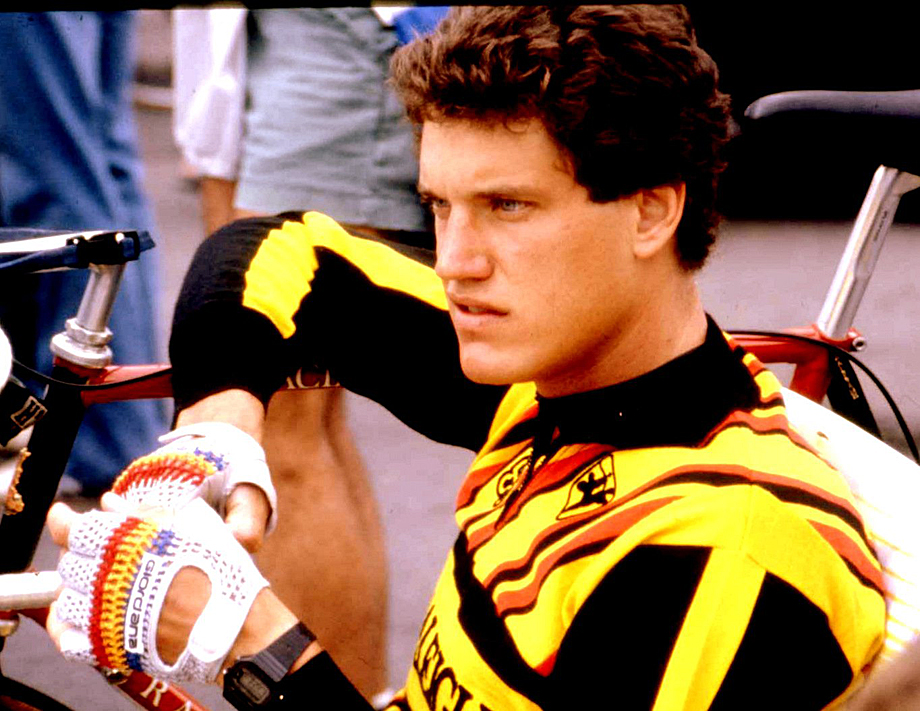 PEZ: Did you ever ride the Peace Race – I heard a story that you were in the line up for it but the US Government ‘pulled’ the team.
We pulled out when Chernobyl blew up in ‘86 – the prologue was in Kiev, 50 miles away from Chernobyl. We were 500 miles to the south west in Poland preparing for the race when Chernobyl blew up sending a cloud of radiation to the north west over Norway. No way were we going to race in that radiation so we insisted on leaving. I raced it the following year in ‘87 when the Peace Race started in East Berlin. The peace Race was the hardest race I ever did. The Eastern Block riders were basically pros, and all doped up and invincible. Plus the near freezing conditions on some days were a lesson in suffering. It made me a stronger, leaner, and tougher rider.

PEZ: Which performance are you most proud of?
Third place in GC at the Commonwealth Bank Classic in ’85. After rehabbing myself from the Milk Race crash, I was super motivated, and despite having a rookie team that was no support to me I won three stages including the final stage in the rain, where they shortened the stage during the race, because I was off the front pulling away, I won the two big 1500 dollar primes and was going to win the whole stage race and everything. I was flying and in my element, just totally having a dream race. 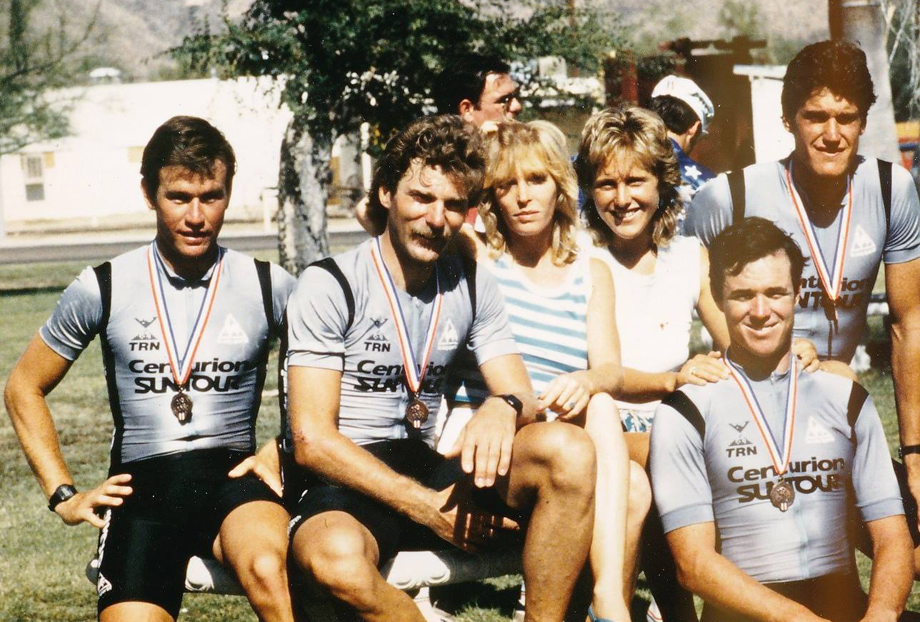 PEZ: Are you still in touch with the sport?
I love the sport and drove Com 3 in the Tour DuPont; helped out making courses in the Sea Otter Classic and drove press cars for two years in the Tour of California. There’s a lot of politics in the promotion of races in the US; Ex-riders don’t really get much respect, and jobs go to guys that are wanna be’s and friend of friends.

PEZ: Looking back – what would you do differently?
I would hydrate more, eat more healthily, train smarter and rest smarter. Ha! – when you’re older and smarter you’re too old! 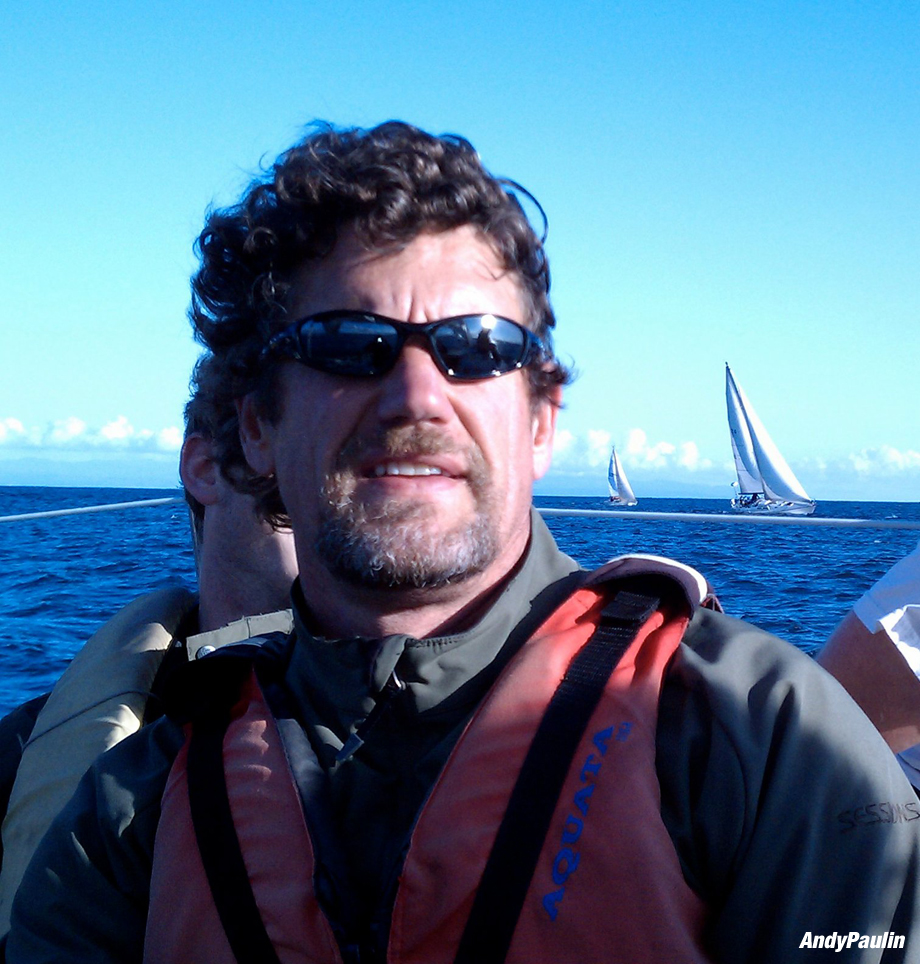 Thanks to all the photographers, some original owners could not be found, if you know better please let us know.