Retro Interview: Thurlow Rogers is one of those names that is still mention when people talk about the days before Lemond and Armstrong… when US riders were not as thick on the ground as they are now. 300 wins to his name, a long pro career and he’s still hitting the podium as a masters champion. Ed Hood caught up with Thurlow to hear all about it from a real ‘legend’. 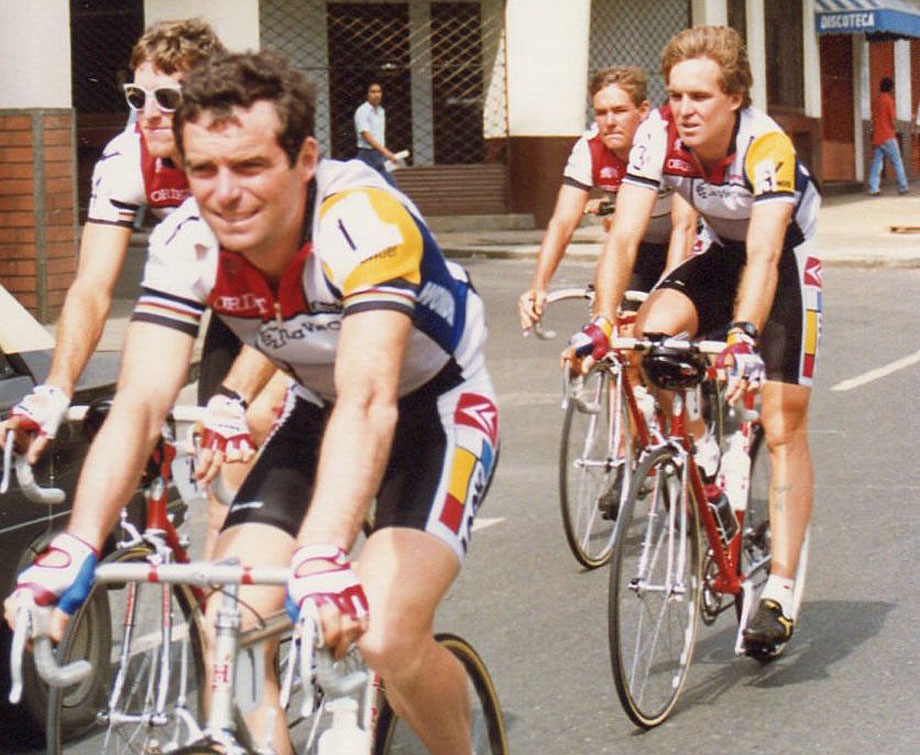 Thurlow on the wheel of ‘The Badger’

He’s one of those 80’s legends with some 300 wins in a career spanning 30 years. The palmarès websites first pick him up in 1980 with a win in a stage of the Circuit de la Sarthe, then there are stage wins in the Settimana Ciclista Bergamasaca, Giro delle Regioni, a national TT title, an Olympic ride and a whole raft of US domestic results – and he’s still riding master’s races.

He’s Mr. Thurlow Rogers – and recently he very kindly agreed to speak to PEZ about his career:

PEZ: How did you get into the bike, Thurlow?
Thurlow Rogers: At high school I played football but my dad wouldn’t sign off that I could play in the leagues, he said it was too crazy – all those guys running about bashing each other. 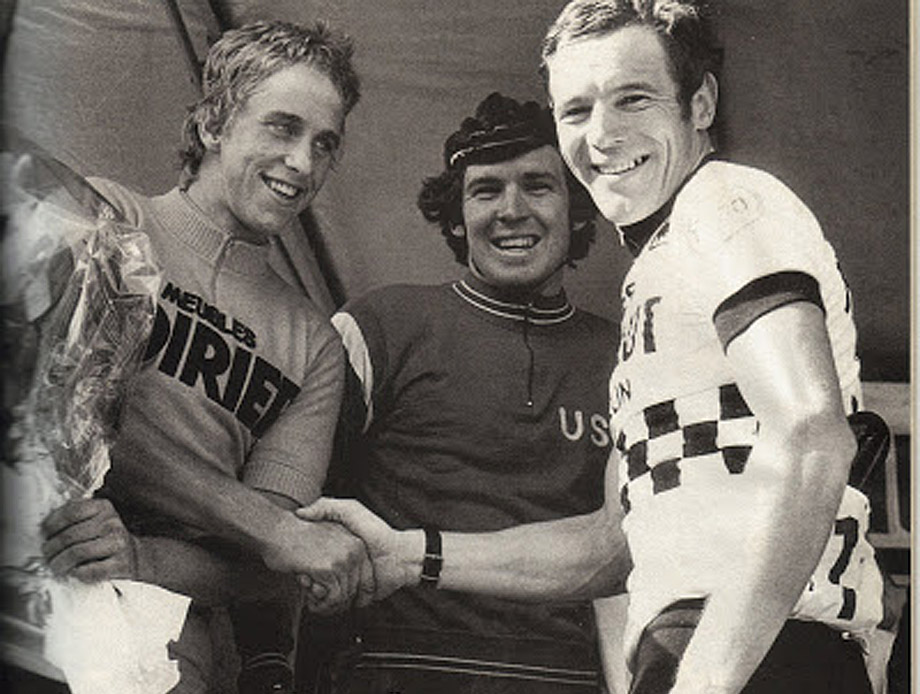 A young Greg Lemond, Thurlow Rogers and Roger Legeay before he became a DS

PEZ: Diving straight into your senior career; a stage win in the Circuit de la Sarthe in 1980 – quite an achievement.
That was my first pro win in Europe; Greg Lemond was riding and won the overall. That was the last stage of the race which I won; riding to defend Greg’s lead. There was an early break, I tagged on so I could either drop back if needed or go for the stage. On the finishing circuits I was fresh and scampered off on my own to win.

PEZ: You had some nice results in Italy in ’83 and ’84.
I won stages in the Bergamasco and Regioni in ’83 and was second on GC in the Bergamasco in ’84. Eddie B organized those trips to Italy and France in the spring. He’d grab all the US talent to see how they’d perform against the big guns. They were good, tough races with varied parcours; climbs, sprint finishes – they were hard and varied enough to provide opportunities to go for results. Those ’83 and ’84 seasons were all about preparing for the Olympics – Eddie mixed up who went where to see who was going to ride in Los Angeles. 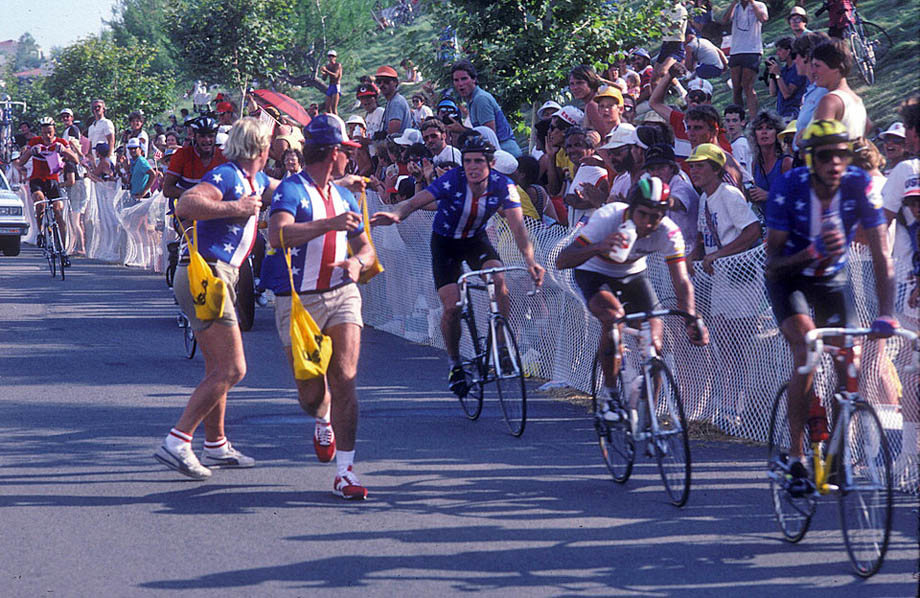 At the LA Olympics

PEZ: Tell us about LA?
Eddie B always had a plan but at the same time, if an opportunity came along then you should take it.
The thing about the Olympics is that there’s only going to be glory for one guy. Alexi Grewal, Davis Phinney and me were the nominated guys – Alexi got away but with the Canadian, Steve Bauer and Davis and I figured Bauer would beat Alexi in the sprint so we decided to chase and bring them back. We blew ourselves up and two Norwegian guys went up the road (Dag Otto Lauritzen took bronze with Morten Saether fourth, ed.)- but Alexi won so I guess it all worked out.

PEZ: You were sixth in LA, any ‘what ifs’?
I’m not a coulda, woulda, shoulda kind of guy. 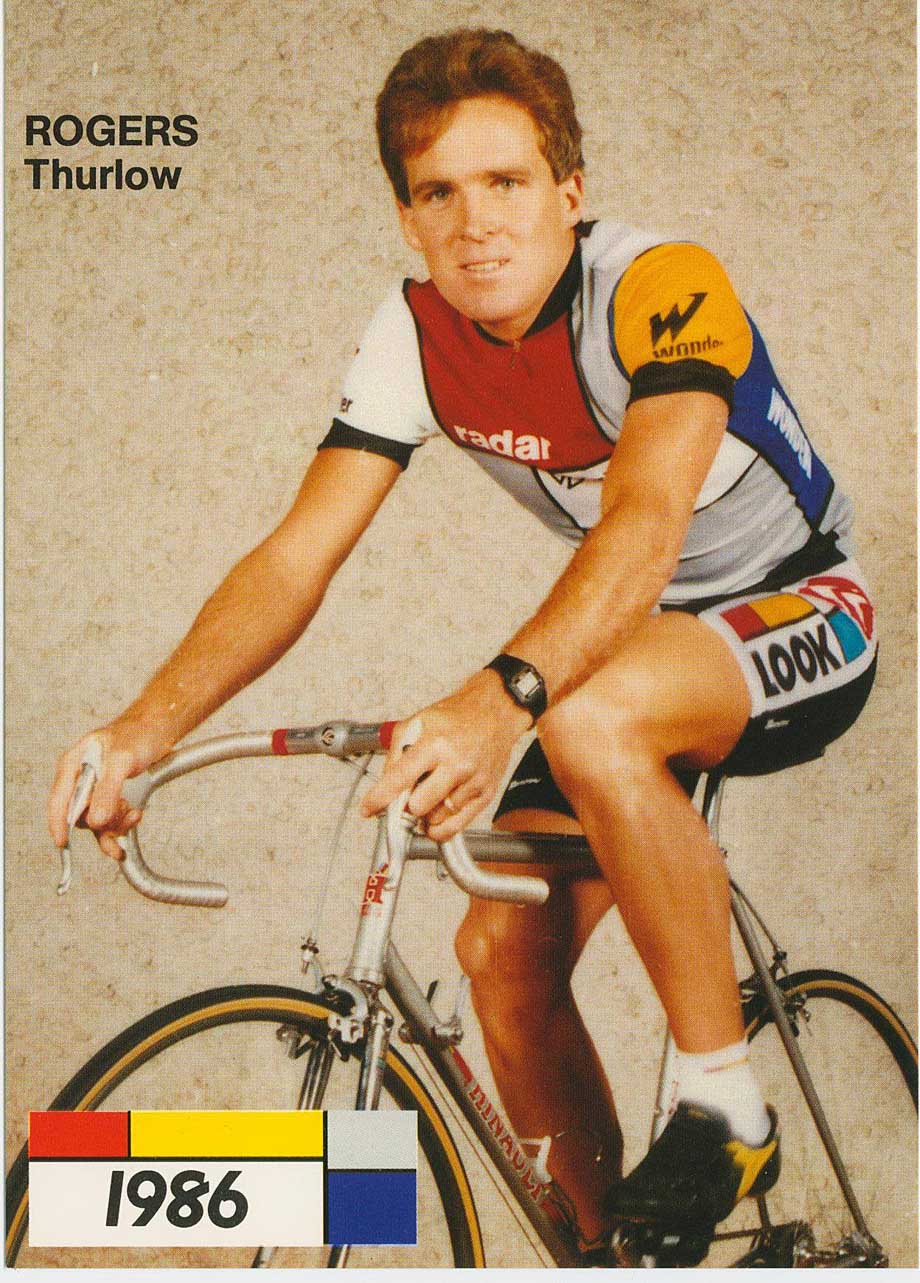 PEZ: 1986 was a good year for you with La Vie Claire.
I was with Levis but guesting for La Vie Claire; Andy Hampsten, Steve Tilford and I were all ‘available’ to ride for them. They’d say; ‘we’ve ran outta bodies and need some cannon fodder over here!’ Any trips to Europe were always a big help to your condition. In the US the stage races were only a couple of days but over in Europe there were plenty of four and five day races to ride. 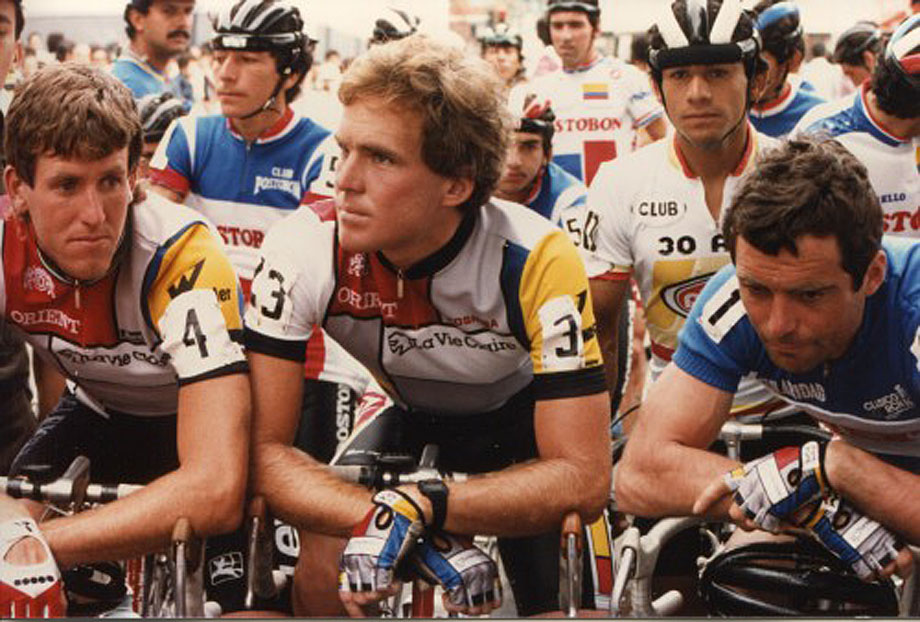 PEZ: Did you ever consider the Euro Dog route?
Not really, I had a wife, a life and stuff in the US – six weeks over there at a time was enough.

PEZ: The Peace Race, you were fourth on GC, that’s a big result.
It’s a cliché but at that time the Peace Race was the Eastern Bloc Tour de France. A two week race, I rode it just once but that was enough. It was a serious battle between the East Germans, Poles, Czechs and Russians. We had good connections with the Poles due to Eddie B and we had the former top Polish rider ‘Stanley’ Szozda advising us. He’d been one of their top riders but was now into management and would come and give us the low down. He’d drive the stage each morning and then run us through what to expect – and what was very useful was that he’d talk us through the psychology of the race. The most important thing for the Russians and East Germans was the team prize so that gave you and idea of what to watch for. So if a break goes and there are three Russians and just two East Germans then you know the Russians would go. A break went and the East Germans had the numbers on the Russians four to two, I was there and a happy camper because I knew the Germans would go as hard as they could. One of the Russian riders, a little guy kept infiltrating the front of the echelon and trying to slow us down so one of the East Germans, a huge guy, grabs him and drags him across the road then down a ditch.

The little Russian guy doesn’t crash, gets back on the road and starts doing the same thing. This time the same East German hurls the little guy off the other side of the road. The Russian gets the message and keeps out of the way after that. But then we’re coming into the finish and one of the Bulgarian guys starts using his elbows a little bit to fight for position. Right away the commissar comes up and warns him – I’m like; “what about the little Russian guy who just thrown off the road twice?” I figure the commissar must have been East German!

It was life or death with those guys – but the Polish staff guys we had were good, they looked after us.
The accommodation was basic, long, grey dormitories like in a prison – but at least in a prison cell in the US you have a toilet, there you had to walk down the hall to get to it. We couldn’t believe the food; lots of sausage-like substance and soup was clear gelatin with a few vegetables floating in it. But after the second or third day I noticed that all the East Germans had a banana in their back pocket – carefully positioned so that everyone could see it. Of course, we’re all thinking; “where the hell do they get the bananas?” On the flight home I discovered from a guy that one of the East German coaches grew them in a greenhouse. It was psychological thing, everyone else wondered how they had them and wanted one themselves. I was happy to ride it once; there would be no second attempt – two weeks of that was plenty long enough. 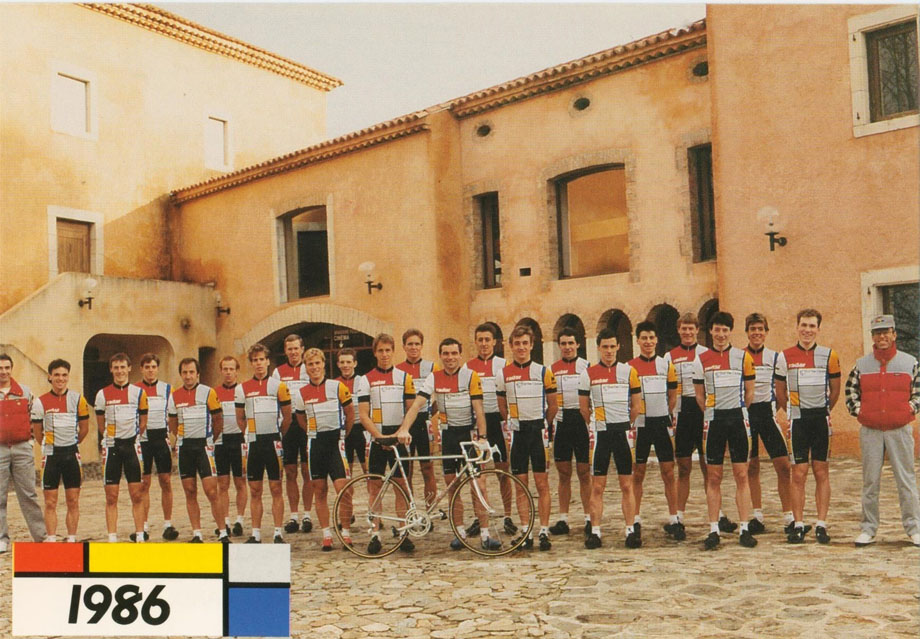 PEZ: I see you have some MTB palmarès?
Yeah, a little bit – that was at the start of the MTB boom. 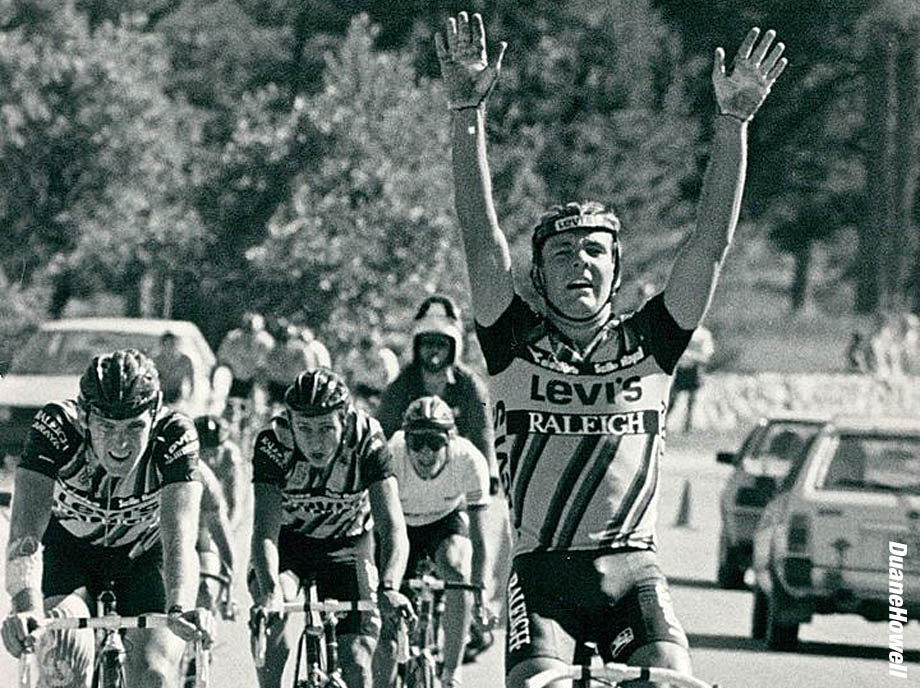 PEZ: What’s your favorite parcours?
I was never great at any one thing, I could sprint a bit, climb a bit and ride an OK time trial so my favorite races were those where you have climbs where it’s hard to decide if you should be on the inside or big ring – I was never into courses where you needed 42x 21 or 23.

PEZ: You’ve had a long career, 30 years.
That’s as a result of having raced at a tolerable level during my pro career. Guys like Greg Lemond, Lance, Chris Horner, Levi Leipheimer, Andy Hampsten have all raced so much that they can’t wait to quit. 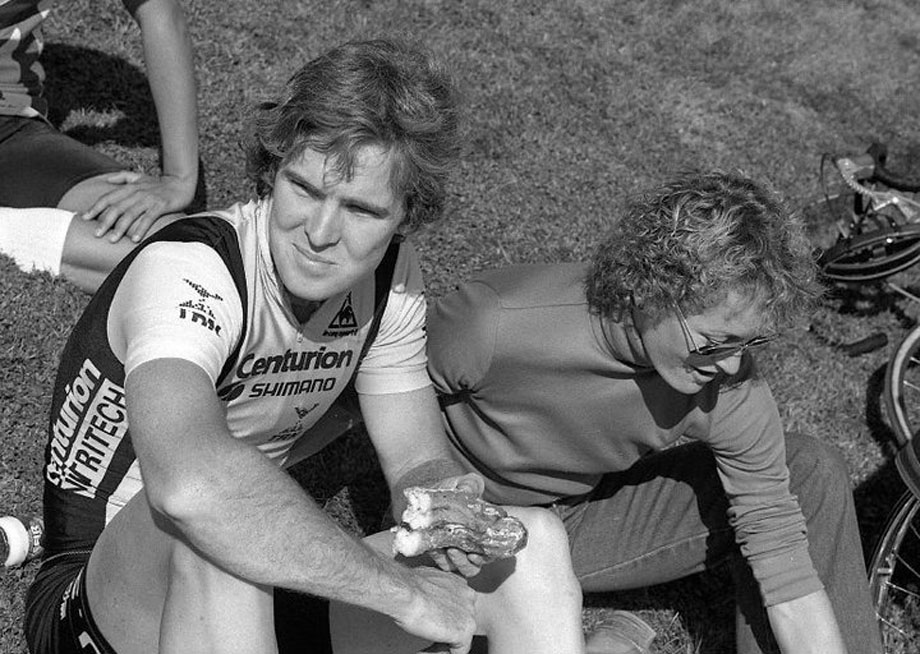 Racing at home in the US

PEZ: You were World Masters Champion.
Yeah, that was when it was in Austria and not all over the world like it is now. That was 2006, I won the road race then in 2007 I won the time trial; Malcolm Elliott won the road race that year. I still ride masters’ races, I like the feeling of being fit.

PEZ: 300 wins?
That’d be about right but riding the LA Olympics towers way above anything else I ever did on a bike. 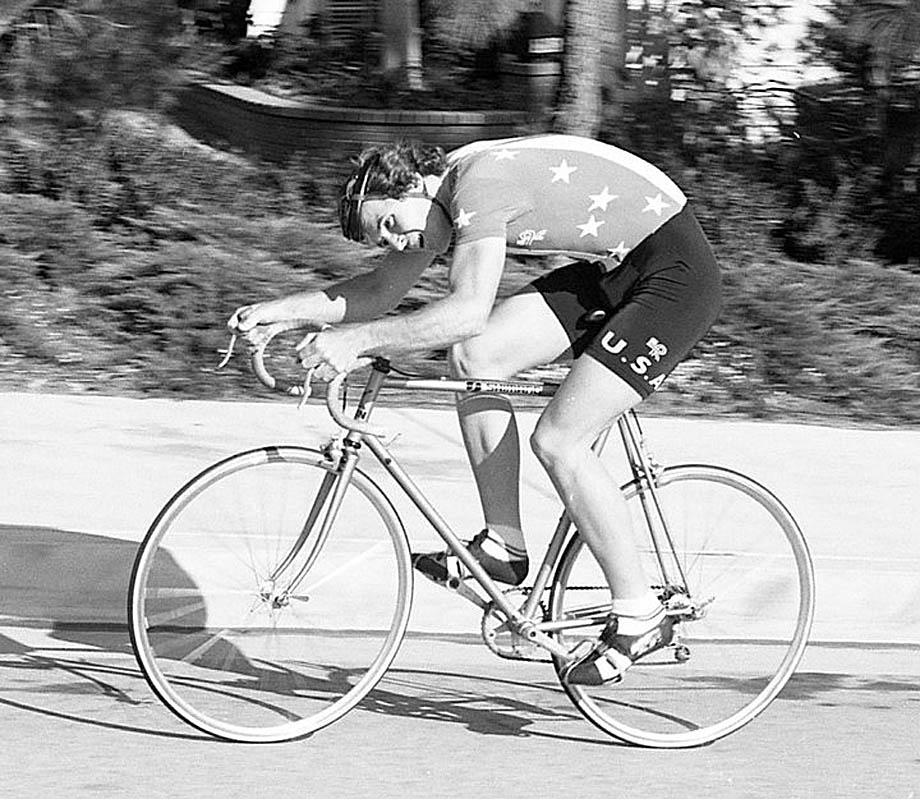 ‘Full Gas’ in a TT for the US team

PEZ: If you had your time over?
I think I’d have paid more time to pick up languages – there’s plenty of English in the European peloton now but there wasn’t back then. You always had to ask other guys, it would have been nice to learn to speak French for yourself.

# ‘Legend’ an over used word but appropriate when applied to Thurlow Rogers. Many of the photos are from Thurlow’s collection, with much thanks to all the photographers, mostly unknown. # 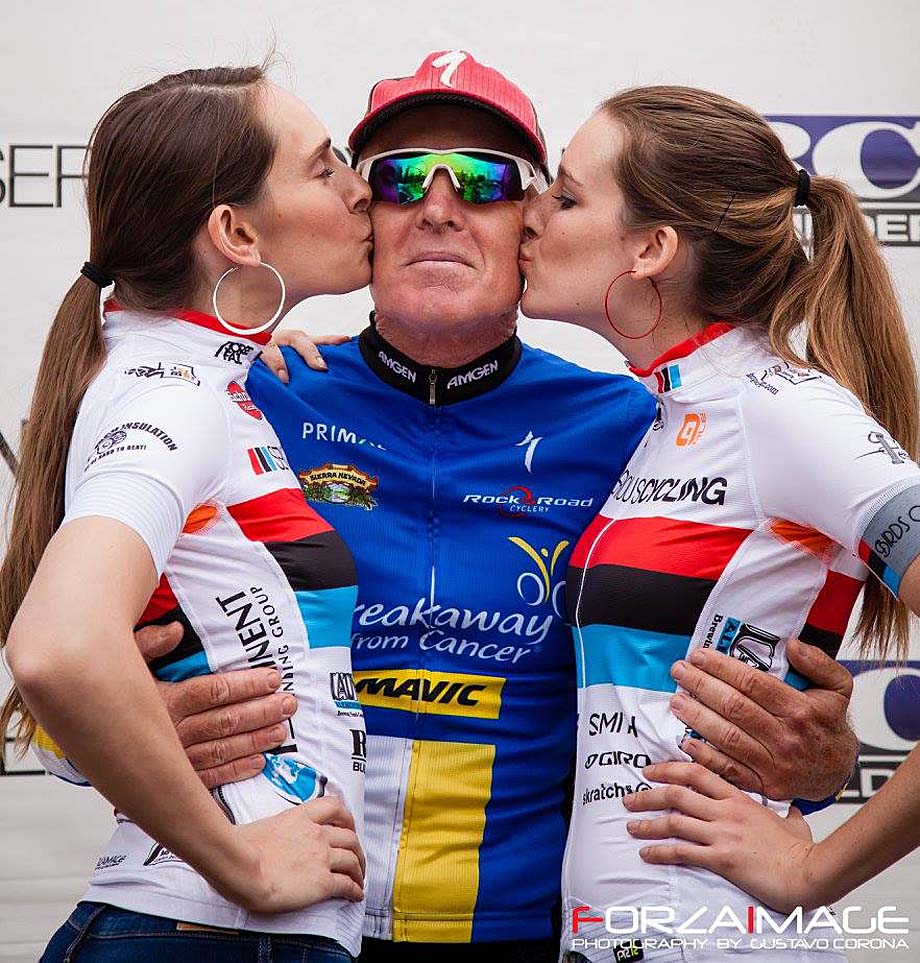 Still on the podium now