Retro Rider Interview: As the 2018/19 cyclo-cross season is kicking off in the US with the World Cup in Wisconsin, Ed Hood catches up with a British cross legend – Steve Douce. Seven times British National champion in the mud and a very experienced man on the road, Steve’s career was brought to a premature end in a mountain bike race crash. Here is his story. 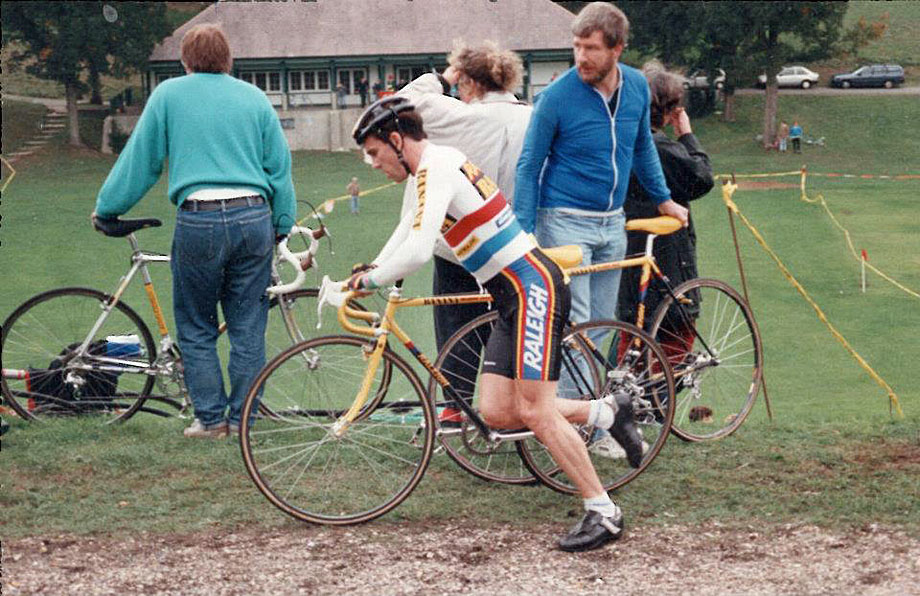 It’s nearly that time – mud, nobbly tyres, 1 x 11 transmission, burgers, frites, crazy fans and Wout versus Mathieu. Yes, cyclo-cross. Over the last couple of winters we’ve tracked down and spoken to some of the ‘greats’ of British cyclo-cross, John Atkins, Chris Wreghitt and Barry Davies to name but three.

But our Spanish mentor, Alastair Hamilton pointed out to us that we hadn’t spoken to the man who won the title seven times in the 80’s and 90’s – Steve Douce. Between 1983 and 1995 Douce finished on the podium no fewer than 11 times with two silvers and two bronzes to keep his seven gold medals company. Al knows Douce from the days the ‘cross man rode for the Raleigh road team in the summer in prestigious races such as Gent-Wevelgem, the E3 GP and Circuit de la Sarthe – all races where Al was mechanic for the Raleigh-Banana team. 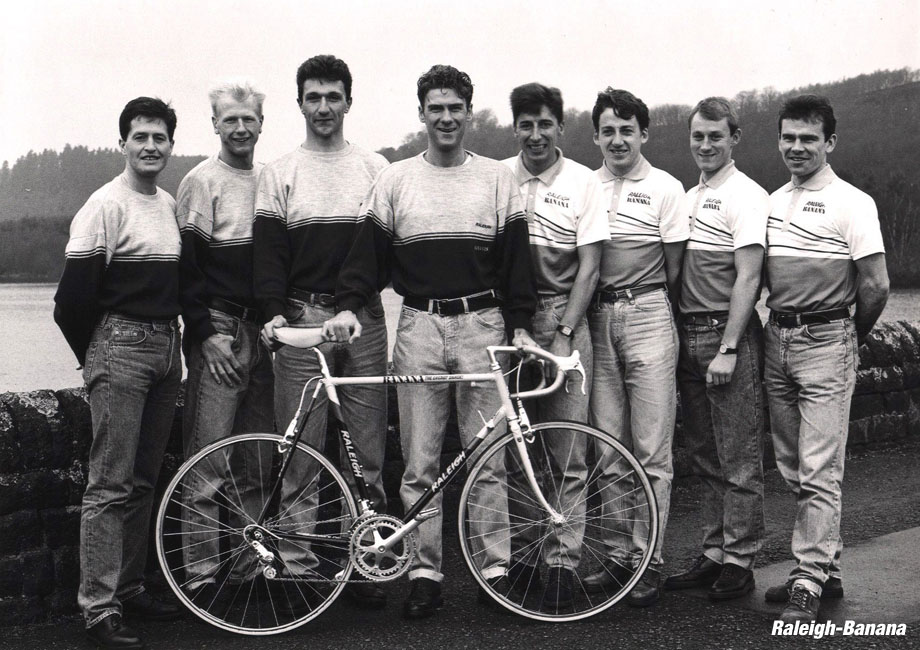 We kicked off by asking Douce which of his seven titles was most memorable?
Steve Douce: The first one, I caught and passed Chris Wreghitt on the last lap; he was out and out favourite on the day but I got up to him and won – that has to be my best.

PEZ: You were up against some handy boys back then?
When I started it was still the period of Atkins and Mernickle domination; then there were David Baker, Chris Young, Wreghitt, Roger Hammond . . . Baker was probably the toughest rival but we all had ‘up and down’ years – we all trained on ‘feel,’ there were no power meters or laptops back then to make your training ‘scientific’. I had my best winter seasons when I rode a road season with the Raleigh team, it gave me speed and stamina – we were riding races like the Milk Race, Kellogg’s Tour and the Nissan Tour of Ireland. 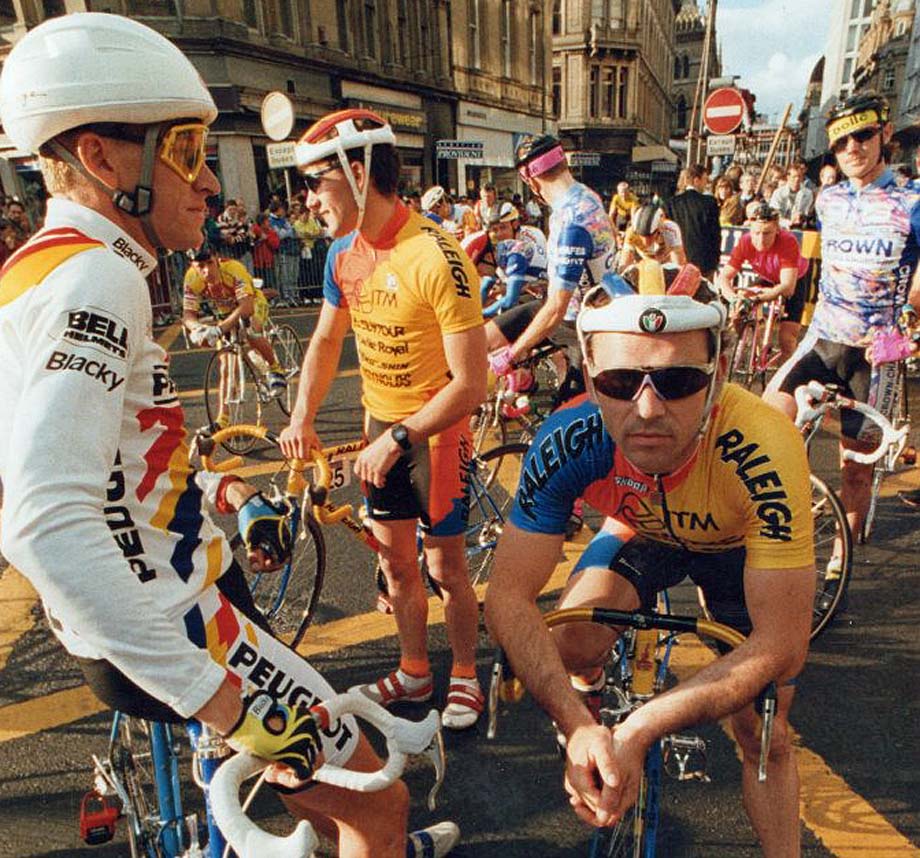 PEZ: You were pro for a decade and more?
Yes, but I wish it had been longer, my career was taken away from me by a bad crash I had in a mountain bike race when I was just 31 years-old. I was riding mountain bike races after the Raleigh team folded – I’d found it difficult to get a contract like the one I had with Raleigh because the scene contracted and people viewed me as an ‘all rounder’ – road, cross, crits, ‘cross. My time with Raleigh was definitely the best for me, all of my other years I was a single sponsored rider. 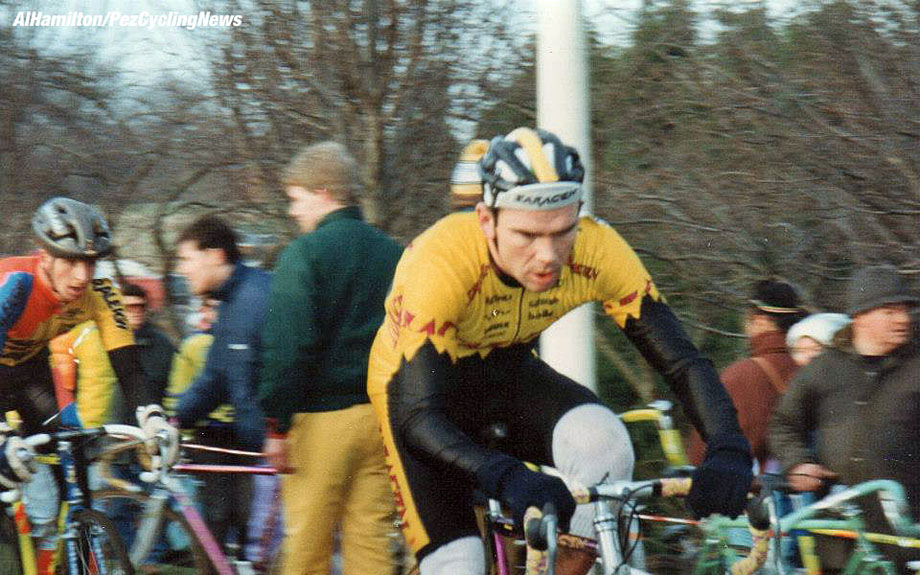 PEZ: Which was your best year?
That would be when I rode for Saracen, I won just about every ‘cross race I rode in the UK. But I made a mistake with my career, after I won the British that first time I went to live and race in Switzerland, with the benefit of hindsight I should have gone to Belgium. The racing there is just so much faster and brings you on. 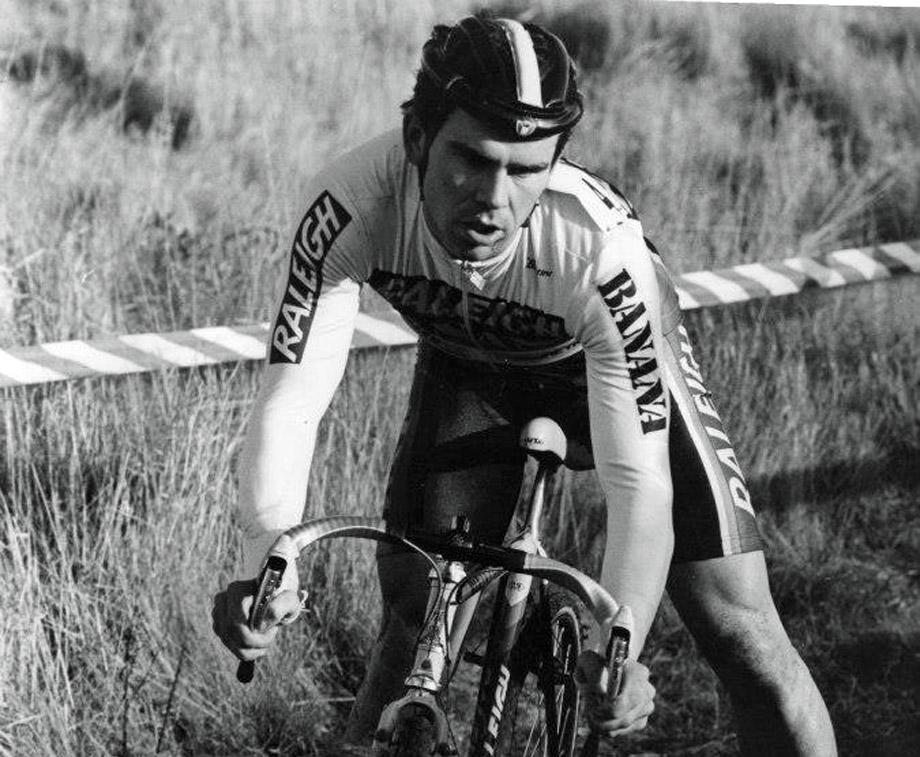 PEZ: And you had some nice results on the continent?
I rode in Belgium, France, Switzerland and Spain. Your contract money was OK but you rarely ever saw your prize money. I liked racing in Spain, up in the Basque country – where the separatist movement was still very much in evidence – it was very different with an 11:00 am event start, unlike Northern Europe where it’s usually a 3:00 pm start. I raced down there with the German rider, Mike Kluge it was good craic, after the event you’d all go to the local working man’s club and have a few brandies – good times. And they were different times; there were no mobile phones or computers back then, you had to make your own shoes, my first ones were converted football boots – but then I graduated to road shoes with bits of ‘cross tyres stuck to the soles. No, you can go and buy it all off the shelf – a ready to race ‘cross bike, shoes. . .

PEZ: How did you do at the ‘cross Worlds?
I rode every Worlds up until my accident, off the top of my head my best finish was around 12th or 13th but when you look back at who was taking what stuff it’s hard to say to say what that was really worth – fifth? sixth? You’ll never know. 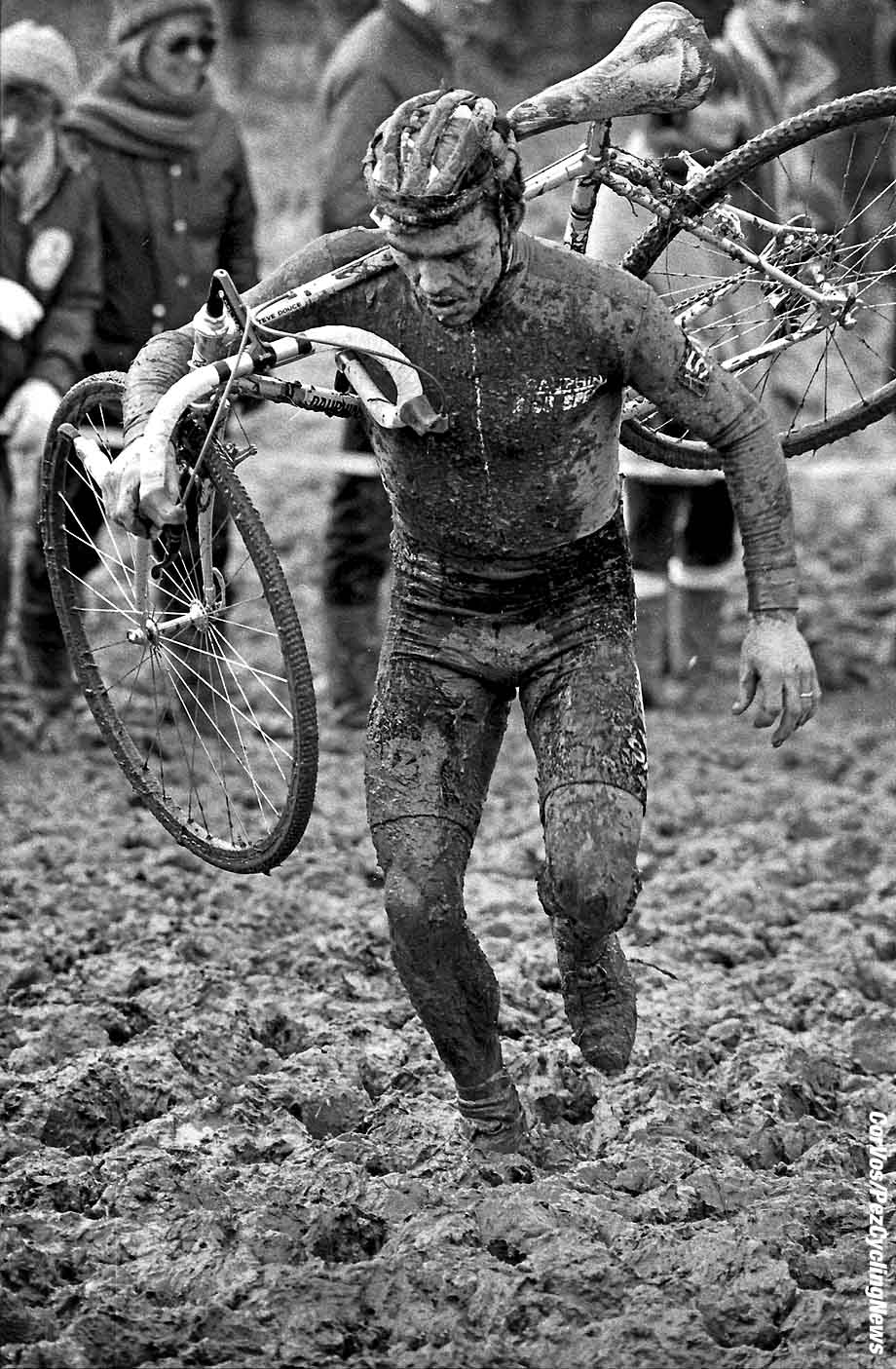 PEZ: Were you a man for stats – wins, podiums?
No, not really, I raced every weekend for three months over the winter so I guess I must have netted perhaps 20 wins in that time during my best seasons?

I had some nice results on the continent too, I raced in Belgium, France, Spain, Luxembourg and Switzerland – I used to go well and was on the podium with Liboton on occasion (Roland Liboton, five times world and 10 times Belgian champion, ed.) As I said, the prize money over there wasn’t amazing but the contract fee covered your expenses. 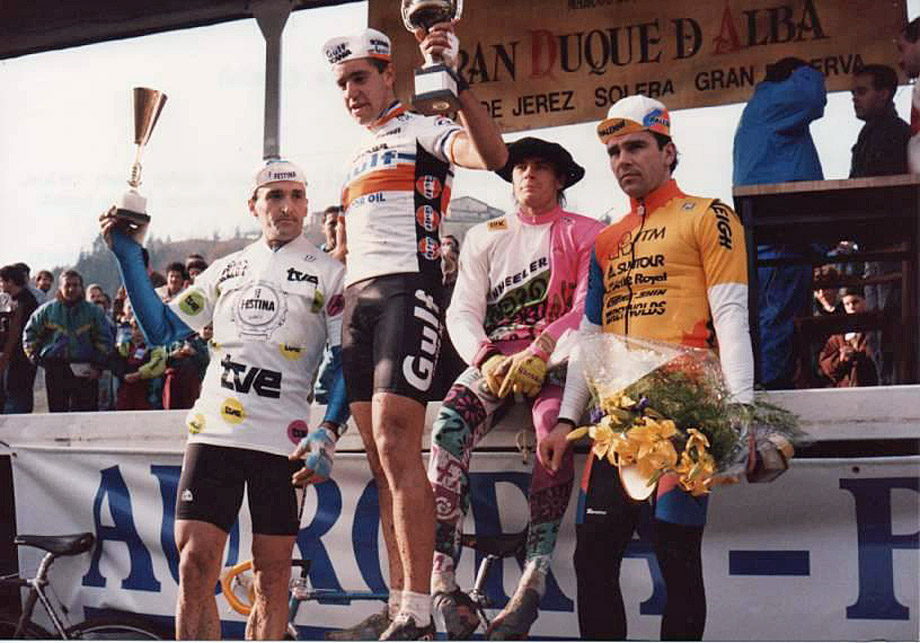 On the podium in Spain

PEZ: What was your favourite parcours?
I liked fast and technical, I’m not a runner – I have little short arse legs! I think today’s races would suit me, back then there were a lot of real ‘mud plugs’ – the Worlds were in Lembeek in Belgium in 1986 and apart from the start/finish straight which was tarmac you had to run the whole course. The tall skinny Italian guy with the long legs, Vito Di Tano won the amateurs and the Swiss multiple world champion Albert Zweifel won the pro race – the pro race came after the juniors and amateur races by which times the course had just been churned into a total mud bath. 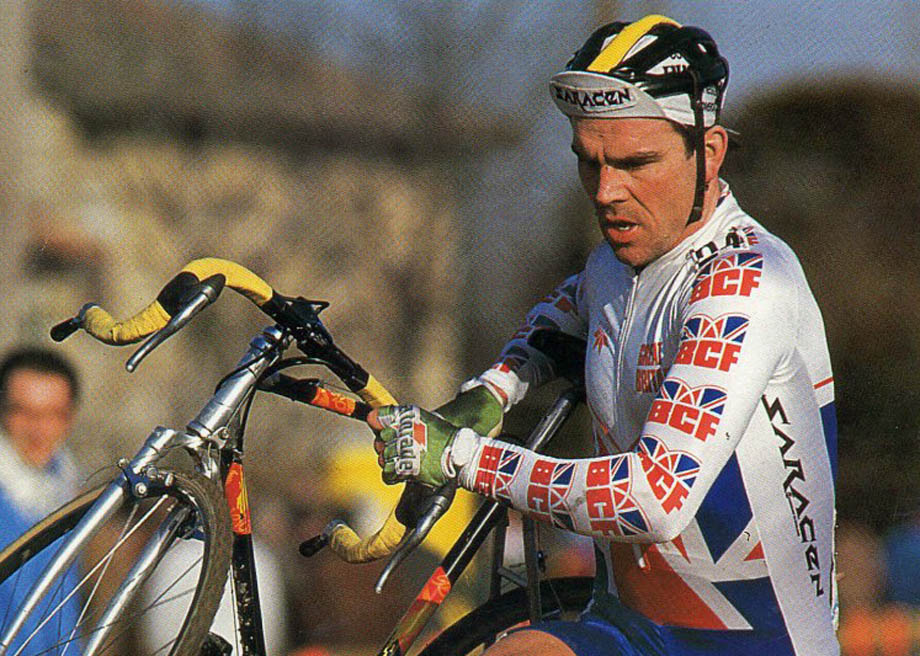 PEZ: Were you an ‘equipment guy’ or did you just ride what you were given?
I just rode what I was given; when I turned pro I was sponsored by T-Shirt Sales, Dauphin Sport, Nico Sport. It was while I was riding the Kellogg’s Tour for them in a composite team that I got head hunted by Raleigh. I rode for George Shaw and then Paul Sherwen – when the road team folded I went to their mountain bike team but I didn’t really like that side of the sport. If it was on a circuit like a ‘cross race they were OK but when you started having to ride over great big mountains. . .

I wasn’t an equipment fanatic; when I rode the Milk Race in a composite team it was on an ‘off the peg’ Dawes – it was OK but didn’t have the best of kit on it. I still got two second places on stages on it – Paul Kimmage pipped me on the line for one and I was so mad I lobbed the bike, the difference between first and second prize was £1,000 then about 50 pence! I was number 13 in that race and at one stage was 13th on GC, points and in the king of the mountains. 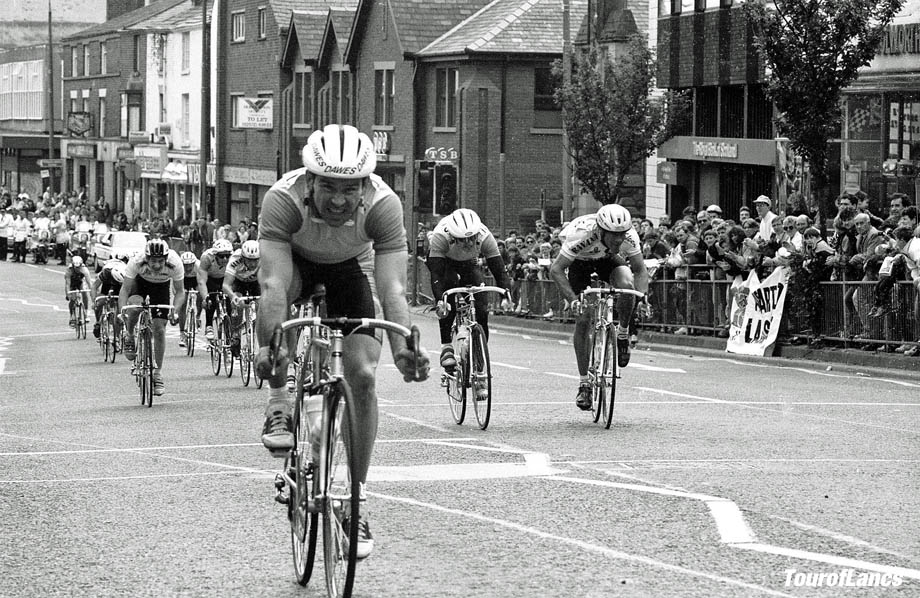 Off the front in the Tour of Lancs

PEZ: Were you a full time pro?
I mainly survived from what I made from the bike but I did do a bit of building work helping out a close family friend, now and again. But not when I was with Raleigh, we rode a full programme and I was 100% on the bike, we were riding things like Gent-Wevelgem, the GP E3 and the Circuit de la Sarthe.

PEZ: How did you get into the bike in the first place?
To cut a long story short, my dad was a footballer and so were my brothers; but when I saw Merckx winning the Tour de France on the TV I was hooked – and my dad and brothers ended up taking to the bike too. 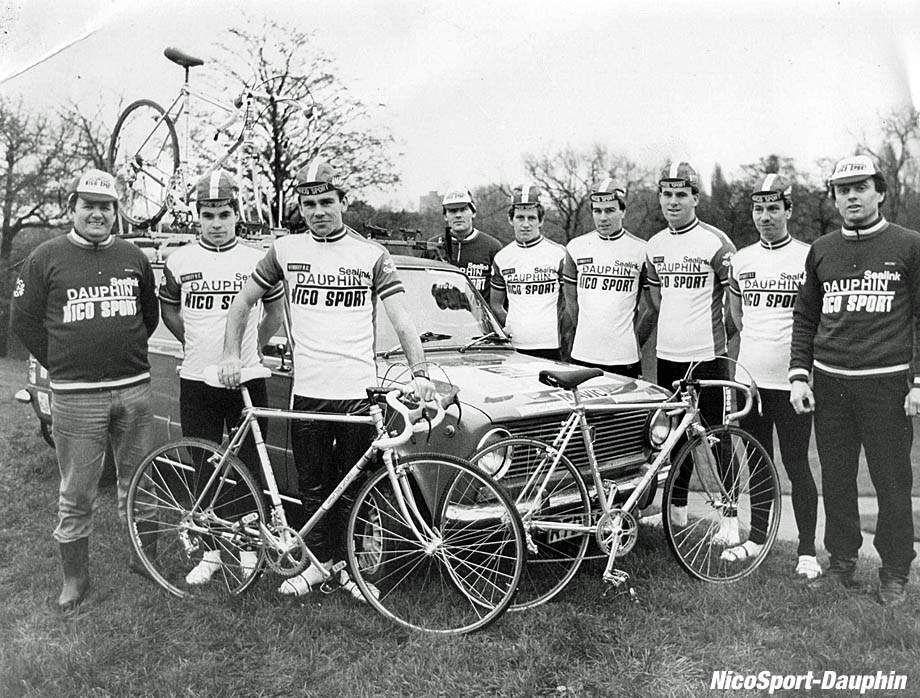 PEZ: Who were your boyhood idols?
Merckx, Thevenet, Hinault; who I actually raced against in a ‘cross at Lanarvily, Finistere – he was a Breton so that was his patch. Johnny Morris used to chuck a bunch of us into his car and we’d go down there and race – it was good craic. But there were more races back then, it all seems to be about elite racing now. 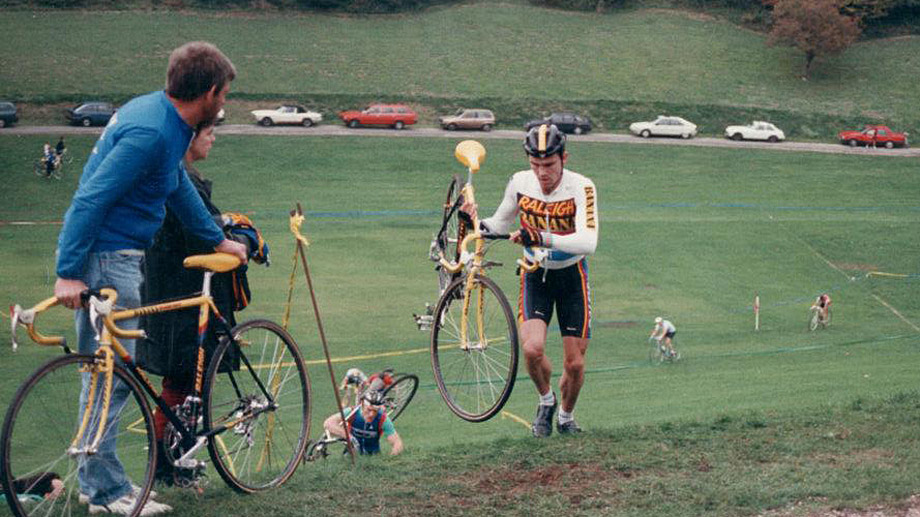 PEZ: It was crash which ended your career, wasn’t it?
Yeah, I’d just got another sponsor and I was riding an event in a mountain bike series up at Catterick. I crashed in a river and was put into an induced coma for five days a result of my injuries. I was still young, just 31 years-old and I had good years left in me but head injuries are serious things. I’m a completely different person now as a result of that crash – mentally and physically.

PEZ: Do you still follow the sport?
I still follow it, yes and go out on the bike again – I had five or six years off. I tried to come back too quickly after my accident but I’m out every weekend now; I’d do more but you have to keep the money coming into the house – you need those beans and toast on the table! 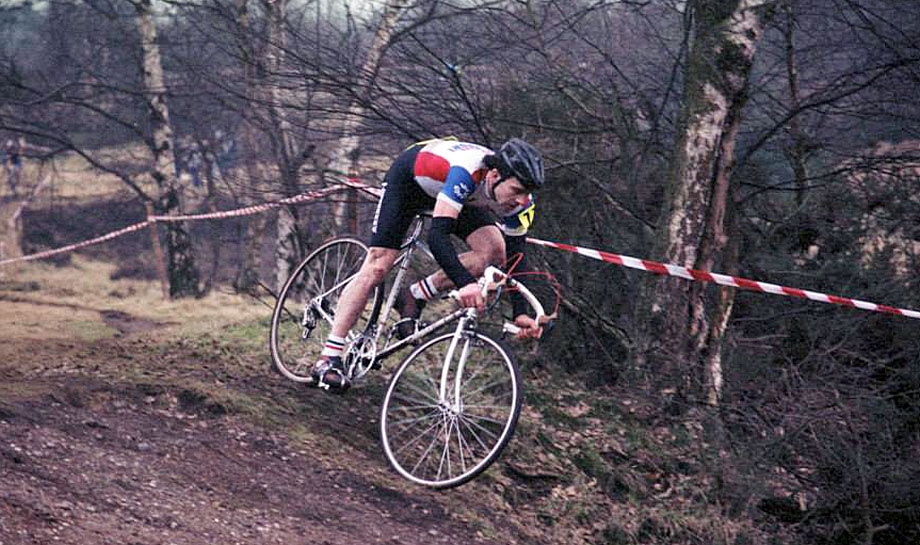 PEZ: Regrets?
I wish I hadn’t gone to Switzerland and gone to Belgium instead and I also wish I’d never ridden any mountain bike races! I’d still like to be involved with ‘cross and for years I worked with BCCA (British Cyclo Cross Association) on a voluntary basis, there was no money around. Not long after I gave that up the BCCA amalgamated with the British Cycling Federation so there may have been a bit more money available then. . .

I still love riding my bike – but I don’t want to be involved in any of the politics of which there seems so much now. 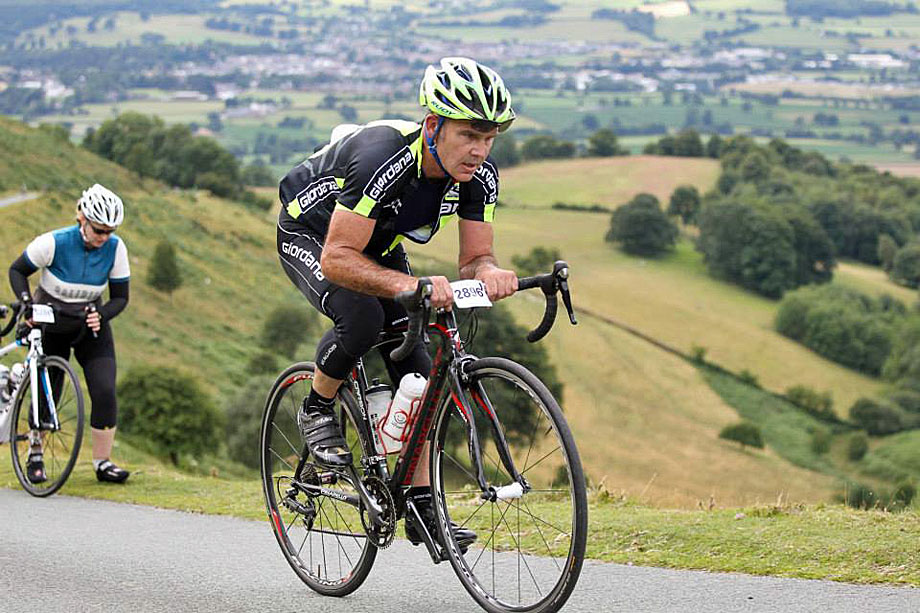 # Thanks to Steve and to all the unknown photographers. #

How To Earn Your Racing Upgrade