– By Rob MacNeil – The 80’s and early 90’s were a very hard time to make a name for yourself in the sport of cycling with riders like Bernard Hinault, Sean Kelly, Greg LeMond, Francesco Moser and Freddy Maertens, but Dutch rider Steven Rooks did it with style. Normally Dutch riders like Steven accel in the harsh spring classics, but he could also climb with the best in the sport. Steven won the KOM jersey in the 1988 Tour de France, plus a stage that year. 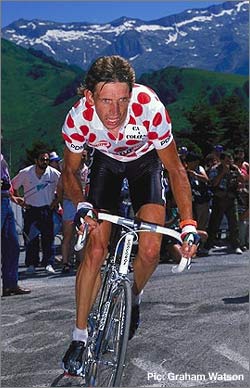 Steven rode with some of the greatest teams as well as with some of the sport’s biggest names. While riding for the Sem-France Loire team captained by Sean Kelly, Steven won the brutal Liиge – Bastogne – Liиge beating former World Champion Giuseppe Saronni and Phil Anderson. Steven also won The Amstel Gold Race, The Championship of Zurich, 2 stages of the Tour de France and the Unofficial World Cup (before the leader was awarded the white jersey with the vertical rainbow as currently worn by Paolo Bettini ).

Steven shares one record with Greg LeMond, which can never be broken. Steven won the Prйsence (Performance Classification) jersey in the Tour de France 1988 and 1989. This jersey is for highest GC rider in the following competitions in the Tour de France: General, Points, Mountains and also (in the years 1984-1989) the Intermediate Sprints. Rooks was also this jersey’s final winner.

I spoke with Steven about his career and some memorable moments.

Rob: You rode for some of the greatest teams ever, including: Ti-Raleigh- Campagnolo, SEM, Panasonic, PDM and Buckler. If you ever had the chance what other teams would you have liked to ridden for?

Steven: Carrera, Once or Banesto.

Rob: You have won classics, Tour de France stages and the World Cup, any regrets?

Steven: I was second on the Worlds behind Bugno in Stuttgart, I must have won that… (1991 Steven beat Miguel Indurain for the Silver Medal).

Rob:. What was the hardest day of racing for you?

Steven: One stage in the Tour de France in 1991, the stage was 255km long with 4 cols and the finish on the top of a mountain(Sestiere) I was so fucked after the race I didn’t eat. The next day was a stage to Alpe D’Huez my body that day was empty. I lost my general
result.

Rob: What are you doing now?

Steven: Being forced to withdraw from the 1993 Tour de France in the 2nd Stage.

Steven: Winning L-B-L in 1983 and Alpe D’Huez in 1988, placing second in the Tour de France and winning the Best Climbers Jersey. 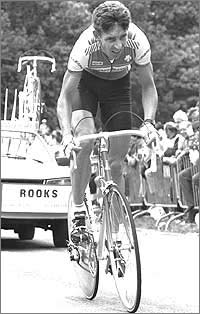 Rob: You rode against Bernard Hinault, did every rider fear him when he was at the front of the peleton?

Steven: In the beginning of my career he was the Master of the peleton, every body has respect for him because he was so strong.

Rob: You have won the King of the mountains competition at the Tour de France. If you could change history, would you have preferred to wear the Maillot Jaune for one day instead of winning the KOM Maillot?

Steven: No,No,No, If you will come to Holland then you must visit Warmenhuizen then you find a cafe` that is painted after I won the KOM jersey, that’s why I say no.

Rob: What should be done about drugs in cycling?

And that’s it folks! Thanks Steven.