If you’re looking for a new bike, you go on the internet or browse the glossy mags- but where do you go if you’re looking for the best up and coming young riders for your pro team ? The Baby Giro, the Tour de l’Avenir in France – and, the Giro ciclisto internazionale Valle d’Aosta in Italy. For the pro talent scouts and agents it’s one of the big shop windows. PEZ spoke to Englishman Joshua Edmondson – who rode the race for Colpack – about Aosta and racing as an U23 in Italia.

PEZ: How did it go for you ?
Joshua Edmondson: – Val d’Aosta was the hardest race I have ever ridden, I started thinking of trying for a result myself as well as helping the team leader Stefano Locatelli; but after the first stage I realised just how hard the race is and started doing more for the team and Stefano.

On the podium with his Colpack team at Aosta – Josh is at the far right.

PEZ: Aosta is the ‘shop window’ isn’t it ?
JE: I’m sure a lot of pro teams look at Aosta for new riders coming up as it’s a race where the really strong riders show.

I know a lot of riders who were strong in that race that are now turning pro.

PEZ: Fabio Aru (Team Palazzago) won it.
JE: Fabio Aru’s performance was incredible, he was consistently the strongest climber and best all round rider in the race; I have raced against him a lot this season and the closest I ever got to him was in Bassano – Monte Grappa where he won again, but after 25 km of climbing I managed fourth, 30 seconds behind him.

I believe he will be going to Acqua Sapone, but wherever he goes I’m sure he will be very successful.

PEZ: Tell us about your team and how you got the ride.
JE: Colpack – formally known as Bergamasca – is one of the best teams in Italy and have really brought me on as a rider this season.

Colpack is owned by Bepe Colleoni, who I owe a lot to.

I got a ride with this team through a contact I had in England with one of the team’s directors, Antonio Bevilaqua – who’s a former pro and manager of Pro Tour team Milram. 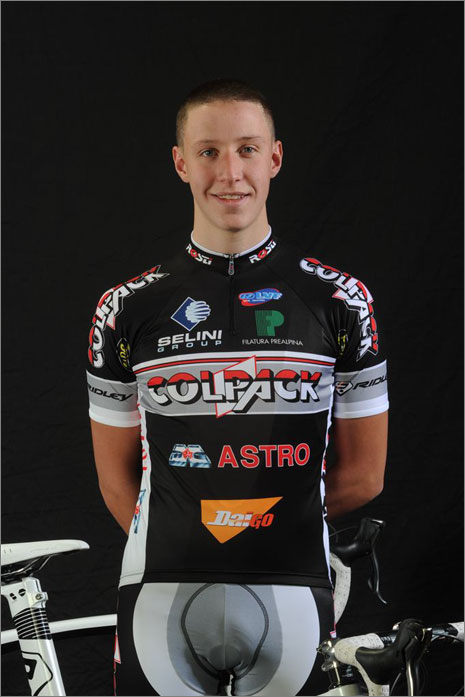 PEZ: Who’s team leader?
JE: The main rider for the team this year has been Stefano Locatelli, who I have learned a lot from; but the team has several exceptional riders.

Stefano is turning pro as is another very strong rider for the team – Andrea Di Corado; so maybe next season I will have more races where I am there to go for the win.

Next season I want to put what I have learned to good use.

PEZ: Where do you live ?
JE: I live in Bergamo in a team house just out of the centre, we have a cook and a cleaner, so generally I just ride my bike and sleep, its easy to be very focused for the racing in this team – they make everything simple for the riders.

PEZ: Tell us about your race programme:
JE: My programme for racing is very busy, I have raced a lot to try and get as much experience as possible.

I have ridden most international races in Italy this year – they’re of a very high level.

I represented GB in April at the tour of Toscana; my season will end in September this year and I’m looking forward to a good rest, sitting on a beach somewhere.

This year was all about learning how to race here and getting used to the extra distance and speed from junior to U23.

I started the season early, racing in early March and for the first few races I couldn’t believe how hard they were, just getting to the finish was my aim, never mind a result.

After a few months I was able to do a lot more for the team in races, and after a month in England mid season having a small rest and buliding up again, I came back strongly and have had a win in the Gran Premio Agostano and more strong rides in international and national races here. 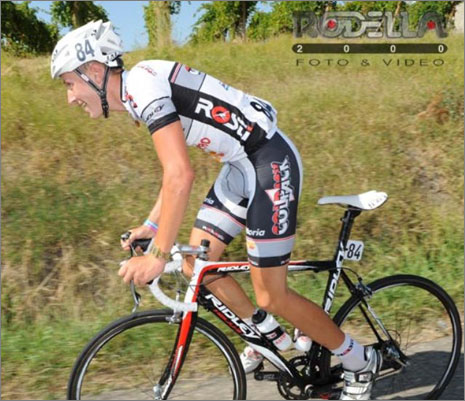 PEZ: How’s the lingo ?
JE: My Italian is very poor considering the amount of time I have spent here, but it’s getting better and I can get by with what I can speak, my team mates have been great in helping me to learn and in some cases they have even learned a little English!

PEZ: You rode a bit of track when you were on the GB Olympic Development Programme:
JE: I rode with GB for one year in my second year junior on the ODP and I rode the track – albeit a lot slower than everyone else on the ODP that year.

I’m not a track rider although I enjoy it on occasion; there is no way I could handle the programme those guys ride, I’d get too bored going round in circles.

PEZ: You rode for UK pro team Motorpoint, last year.
JE: Motorpoint were great for me, I was without a team when I left the ODP in 2010, so I contacted Keith Lambert the manager of the team at that time; he’s been a massive influence on my career.

Phil Griffiths the boss of the Motorpoint squad gave me great support, too.

It was pretty cool riding with people like Ed Clancy and Steven Burke (Olympic team pursuit champions) they always made races a good laugh.

PEZ: Tell us about your training.
JE: Here the team all train together; in the team house there are constantly people coming and going, those not living in the house mostly live close by, so we always have a strong group going out.

We train most of the time with the Gianluca Valoti – he’s one of the teams managers and is in the car behind, so we never slack off.

I’d say I’m a fair mix of old school and hi-tech, I use a heart rate monitor and power meters, but not all the time – I dont think there’s any substitute for hard miles.

There are several races I rode this year which I liked but didn’t have the legs for; hopefully I will be that bit stronger next season.

I aim to win the national road race title – this year I had to abandon because of a mechanical.

I would also love to put in a strong performance in Aosta.

PEZ: Do you have to ration yourself on the cappuccino – or is it the pastries ?
JE: Italian coffee is fantastic – unfortunately were only allowed it on race day!

The pastries are a ‘no go’ during the season – but i’ll be sure to make up for lost time during the winter.