If you’re a US criterium fan and you think that the sprints have been a bit tame lately, we’ve got good news for you – Roberto Gaggioli is coming back, maybe, but; “just for fun.” PEZ talks sprinting with a man who knows what he’s talking about.

PEZ: Roberto, please confirm how many pro victories you have.
Roberto: I scored 207 wins in pro races, my best year in terms of numbers was 1993 with 27, but other years I had bigger wins, like 1988 when I won the US Pro Champs in Philadelphia and the Giro del Trentino.

PEZ: Impressive stats, what are you up to now?
Roberto: I took a year out and went back to Italy with my wife so that my son could be born there; he has dual nationality.

I’m looking forward to getting back into team directing. I’m talking to Amore & Vita – McDonald’s they are planning a dual programme next year; a European and a US team. Velo Vie from Scottsdale Arizona supply the bikes, so they’re keen for the squad to ride a good US programme. But I’ll be spending time on both continents; Pierino Gavazzi is the European DS but he’ll need back up for bigger races. We’ve signed Richard England, the Australian rider who won a a stage at the Tour of Georgia. 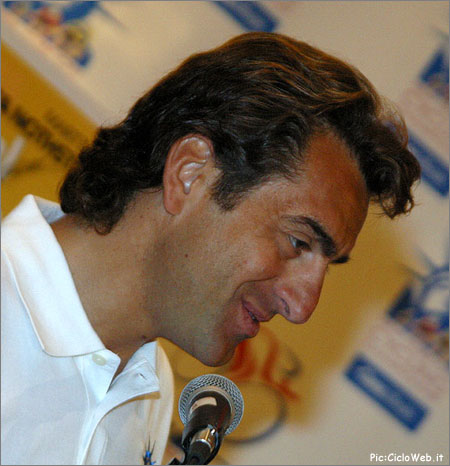 We’re talking to three other American riders and we’ll be retaining the Polish and Ukrainian guys. The team was registered in Poland last year, but they are thinking about registering in the US for 2009. It’s the Italian McDonald’s who sponsor at the moment, but we’re trying to let the US division see the advertising potential there is in backing a pro team. We’ll be trying to get into the Tours of California and Georgia next season, but it’s not easy – they are big races now.

PEZ: You were pro for 20 years – that’s a long career.
Roberto: I enjoyed a long career because I wasn’t burnt out, I only rode two Giros; the race programme in the US is a lot lighter than it is in Europe, so you can expand your career. They say that every Grand Tour you ride shortens your life by a year. I’m actually thinking about racing again, not to win, just for fun because I miss it so much. My ex-team mate, Malcolm Elliott is still racing and winning over in Britain, and he’s older than me! Fanini (Amore & Vita boss) asked me if I wanted a director’s or a rider’s licence, I said; “we better just start with a director’s one for now!”

PEZ: Why did you move to the US?
Roberto: I first came over in 1987 and then again in ’88 and ’89 with the Pepsi-Fanini squad. I won some good races in Europe, like the Giro del Trentino and the Coppa Bernocchi, but I always struggled to get a good team and to play the role I wanted; teams wanted you to ride as a domestique, but my mentality is that I wanted to win – I don’t like to be told what to do. 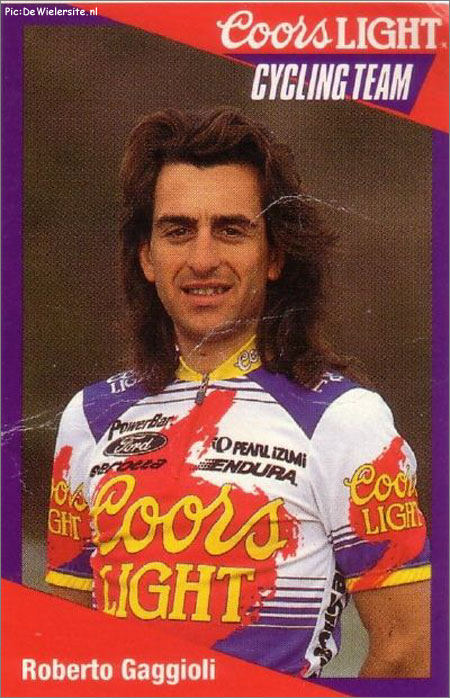 PEZ: Sprinters – born, or can they be created?
Roberto: You must have it, but you must work at it, develop it. When I was a junior and year one amateur, I was a climber , racing against the likes of Bugno and Chiappucci- and then I was involved in a car crash, my back and femur were broken. When I got back on the bike I found that I couldn’t climb like I used to, so I had to say; “what else can I do?” You can develop your sprint in training, but a lot of it is instinct, knowing where to be in the last kilometre, the last lap.

PEZ: Did you have a ‘train’ in your heyday?
Roberto: From 1990 to ’94 I was with Coors Light, we were a really strong team; I would say we won 80% of the races we rode, we often had discussions about who was gonna win that day – I won 27 races in 1993 with Coors. But I could also win on my own, without a train to lead me out.

PEZ: What about the ‘big hair?’
Roberto: It’s a part of my personality; in Europe I wore my hair a little longer and I was always getting shit from my DS that I couldn’t be a proper professional with hair like that. The long hair and the pony tail were a reaction against that, a symbol of my personal right of expression.

PEZ: Golden rules of sprinting?
Roberto: There will be a lot of disappointment to start with, it’s very difficult to win right away, but these times are when you learn and you will get better little by little and your instincts will develop. Instinct is the big thing, knowing where and when to move. There are specific training drills you can do too, to improve your sprint – but you’ll have wait until I open a training school one day to learn about those!

PEZ: Current sprinters?
Roberto: I think Petacchi is coming to the end of his time, he is very fast but is not a flamboyant person; Cipollini was much better with the public; he was a showman, always with things to say – my style of guy. Mark Cavendish will be the man to beat for years to come, I think. When I was back in Italy, I was living five miles from him, we used to go out on the bike together – apart from anything else he’s a very nice guy. He’s spectacularly fast in the last 50 to 20 metres and of course the Columbia team that he has leading him out is just so strong. 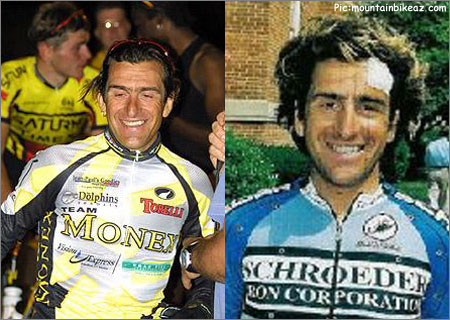 PEZ: Who was your role model?
Roberto: Bernard Hinault; a great champion and a great person. I raced against him in the early part of my career and we seemed to have an affinity, he would always talk to me. I used to get criticism from the likes of Moreno Argentin and Guido Bontempi because I didn’t stick to their unwritten rules; like I would attack early and you weren’t supposed to do that. I think that maybe the animosity that those guys had towards me stopped me from getting on to the teams that I was capable of. Hinault though, never criticised me, he always had time for me; I think he saw that I was a bit of a rebel and that was his personality too.

PEZ: I have to ask – the 2″ x 4″ incident?
Roberto: There has to be respect in bike racing, in sprints there are lot of elbows getting used, but you don’t take your hands off the ‘bars and push people. It happened twice with this guy (Jon Sundt) and the second time it was only because I know how to ride a bike that I didn’t crash. He pushed me right off the road and at the finish I lost my temper – it was the first time in 20 years as a pro that I felt like that, I just lost it, it wasn’t cool. He came towards me and there was this piece of 2″ x 4″ so I picked it up and whacked his bike (the Klein in question would certainly have needed a new down tube!) Like I say, it wasn’t cool.

Maybe those criterium finishes have been too quiet lately!

With thanks to Roberto for his time and wishing him every success with Amore & Vita-McDonald’s.

Pros & Their PowerCranks: Part I

E is for Heroic: The Strangely Beautiful L’Eroica