He has an Oscar and a Grammy. He’s been called “the funniest man alive.” He’s a friend of Lance. He’s also a dedicated cyclist, and his riding is like his comedy… you never know what’s next. We caught up with Robin Williams at the Tour of Marin… and now he’s been PEZ’d!

You never know when you’re gonna have a great day, but your chances are usually much better if you “get out there”. PEZ-man Bob Cullinan got ‘out there’ last weekend to ride the Tour of Marin (www.tourofmarin.org), a 50-mile fund-raiser that provides tuition assistance for students at Marin Country Day school in Corte Madera, CA. 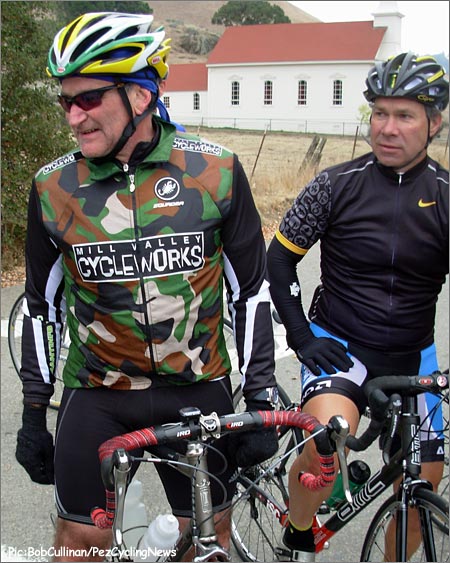 Hey – isn’t that…? Yeah yeah it is – Jim Ochowicz- standing beside the guy in the camo vest!

He went almost un-noticed among the 200 riders on this tour of western Marin County, but Pez-man Bob Cullinan spotted Robin, in spite of the camo-vest he wore on the ride.

PEZ: Robin, how hard are you riding today?

ROBIN: That hill was hard, but now I feel better! It was weird…we did it last week, and it was fun then, but not now. I don’t know…it’s due to the fact that I just felt like s***!

PEZ: I think the last time I saw you was when you rode with the Discovery team last year, the day before the San Francisco Grand Prix. They hammered then, but it seems like these guys are taking it easy today.

ROBIN: Yeah, I think today is a mellow ride. Everyone’s having a good day. 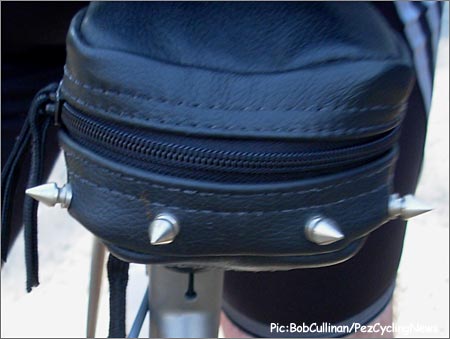 PEZ: How much are you riding now?

ROBIN: Hills, basically. All around here. I either park in Fairfax and come out this way, or go out to Pt. Reyes. It’s gorgeous!

PEZ: When you’re out on a movie shoot, or on the road, do you take a bike with you?

ROBIN: Oh, yeah, very much so.

PEZ: How much do you ride then, when you’re out on location?

ROBIN: If I’m in Vancouver, I ride a lot. If not, I have to CompuTrain.

PEZ: But compared to this, how do you like being on the CompuTrainer?

ROBIN: It’s like playing a video game, except with exercise.

PEZ: What program do you put on the screen?

ROBIN: They have all sorts of different rides. The Velotron has the bumps, and there’s this place called “Fit Centric” that has all these great rides, even Alpe d’Huez. It’s fun…it’s gorgeous…check it out. 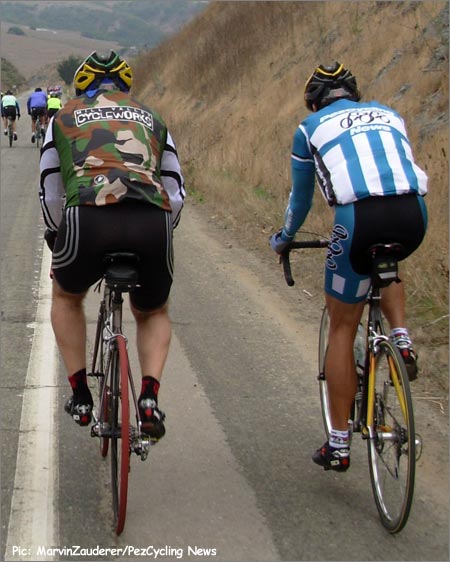 You don’t build form like Robin’s just by doing big rides – he’s also a huge fan of the CompuTrainer.

PEZ: Do they have any Marin County rides?

ROBIN: You can make one. You can do it with a training program. You can map it out, and then it creates the scene.

(Robin pauses to let a fan take a photo. The fan says, “This is going to be published in Playgirl…I just got a picture of your crotch!” Robin responds, “Happy New Year!”)

ROBIN: I don’t think so. I’ll just be hanging at home.

PEZ: Do you have a movie shoot scheduled?

ROBIN: I think so…I’ll have to check it out.

PEZ: One last thing. I’ve heard all kinds of stories, but tell me…how many bikes do you have?

ROBIN: Oh, I have no idea. Many…many…too many to count!

For this ride, Robin was riding a bike from Independent Fabrication. He has also been seen recently on a special, tricked-out Cannondale Six13. That bike is painted red, white and green, the Italian national colors. Only 20 of these bikes were made, one for each stage of the 2006 Giro d’Italia. They reportedly retail for around $14,000.

NOT An Actual Plug
If you’re wondering why Robin likes CompuTrainer so much, check out our:
Read The PEZ-Test here

Check out the Computrainer and Velotron at their website: www.Computrainer.com