He scored 139 professional wins, including the Three days of De Panne (five times!), Ghent-Wevelgem, The Tour of Flanders and, in 1987, Paris-Roubaix. It was one of the most savage editions of the race, ever – only 47 finished from 192 starters.

PEZ caught-up with Eric Vanderaerden on the eve of the 2007 Three days of De Panne as his DFL team prepared to do battle with the Pro Tour squads at the 2007 Hell of The North.

PEZ: How old were you and how many times had you ridden the race before you won in ’87?

Eric: I was 25 and it was my fourth attempt. In 1985 though, I should have won it with two fingers stuck up my nose! I had won Flanders that year and felt very strong so I attacked from a long way out. Unfortunately I met the man with the hammer at 30 kilometres to go and I blew-up. 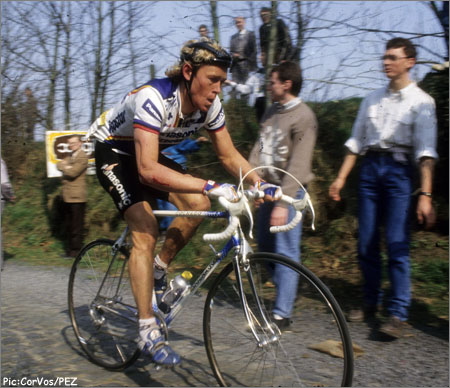 The dominant Panasonic team, headed by Peter Post, was always a team to be reckoned with – particularly with the likes of Vanderaerden taking care of business in the Northern Classics.

PEZ: Was course reconnaissance a big part of your preparation?

Eric: I know that a lot of guys place great store in that, but it’s a thing I never did. I seemed to have an instinct that reminded me what was coming-up; if I had ridden a race once before, it all came back to me on race-day. I never once did a course try-out at Flanders.

PEZ: What was the Peter Post (Panasonic manager) plan for the day?

Eric: Win! That was always the plan with Post.

Eric: Yes, I had some very good guys working for me, especially De Keulenaer and Lammerts, they stayed with me as long as they could and they were a big help.

PEZ: Was there a special set-up for the bikes?

Eric: Bigger tyres at lower pressure, that was it. 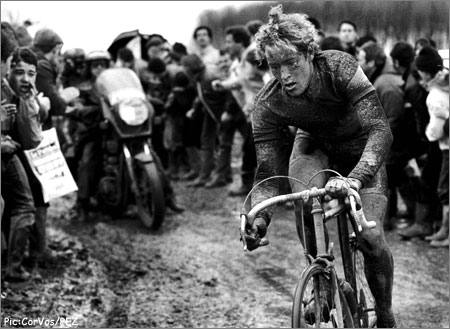 PEZ: It was very bad weather that year, wasn’t it?

Eric: Yes and that suited me very well, I was three times cyclo-cross champion of Belgian as a youngster, so the wet and mud was good for me.

PEZ: What did you eat during the race?

Eric: There were no sophisticated solid or liquid foods back then, so it was small sandwiches with banana, jam or honey.

PEZ: Who were the men to worry-about?

Eric: Kelly! I was watching him all day, he crashed with 25 kilometres to go, that was my signal, I went in that moment. There were four survivors from an early break still ahead; I caught them in Roubaix and out-sprinted them, despite having chased on my own to get up to them; Versluys was second and Dhaenens third. The finish wasn’t on the velodrome back then, it finished outside the La Redoute factory in Roubaix.

PEZ: Was that your greatest win?

Eric: I had equal emotions when I won Flanders in ’85, but Roubaix was a marvellous day. 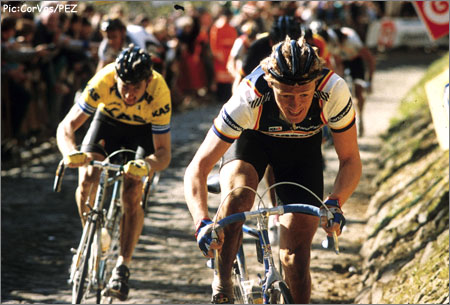 Eric: Yes, he even smiled – a little!

PEZ: Do you still have the cobble stone first prize?

Eric: That year there was no cobble stone awarded. First prize was a small golden cobble; I still have it, at home. (At the time the media reported this prize as being valued at 10,000 pounds sterling) 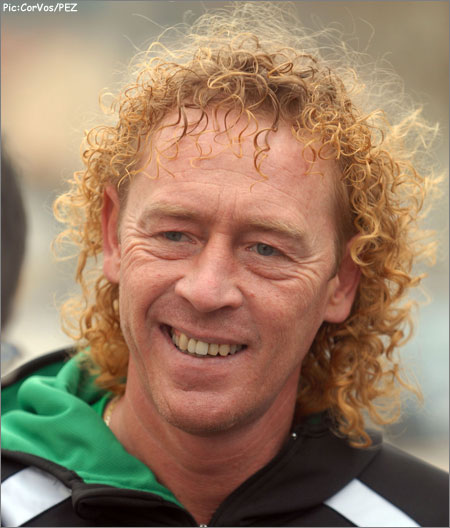 PEZ: And are the showers as bad as they look?

Eric: They are just another part of Paris-Roubaix.

And if you’re ever buying Eric a beer, it’s Grimbergen.

Thanks to Eric; Nico Mattan for telling his DS to speak to the ‘sad Scottish guy’ and to Evan Oliphant (DFL) for the introductions.