“At the time you said it was your greatest ever win, do you still feel that way about the 1984 Paris-Roubaix?’ I’m talking to Irish legend Sean Kelly [isn’t this a great job?] and he has no hesitation in responding to my question; ‘Yes, certainly it’s still one of the best.” Sean gave PEZ the replay on how it happened…

I had excellent form coming in to the race; my preparation race was the Tour of the Basque country which I won, I felt good and was really looking forward to Roubaix. 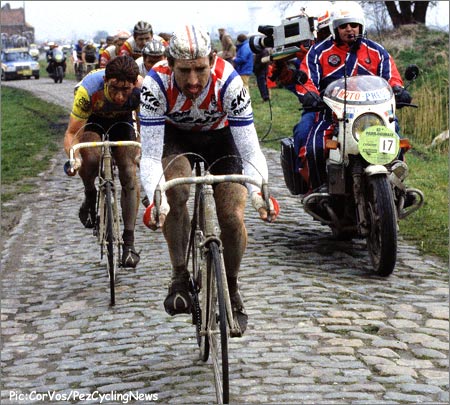 Sean Kelly used tactics and guts to take the 1984 Paris-Roubaix.

“I remember there was a lot of action early-on in the race but I waited and waited.

I remember going back to the team car with around 100 kilometres to go and asking my Skil team director Jean De Gribaldy if I should go on the attack, but he said to wait,

“I finally went with about 45 kilometres to go.

“Rogiers was not a great sprinter and I had no problems at the finish on the Roubaix velodrome.’

Behind, Bondue finished a gallant third in the ‘Hell of the North.’ I asked Sean if it was true that he did not have one crash or puncture during the entire 265 kilometres; ‘Yes that’s true, when you are in good shape you are more alert and seem to get through without problems. But when you are tired and suffering you tend not to notice that cobble sitting a bit above the others.’

Kelly won at Roubaix in ’86 as well, riding for the Spanish Kas team, a soft drinks company. 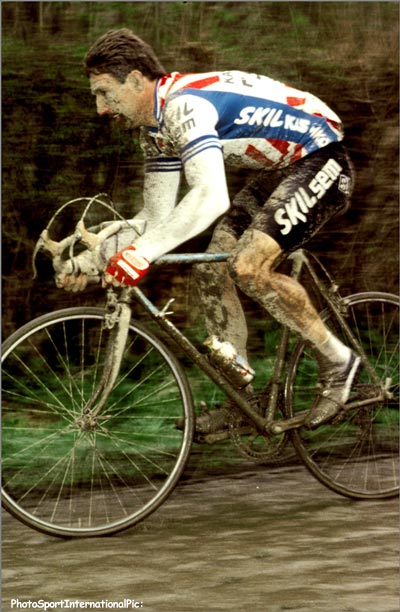 Check it out: Toe straps, tube-shifters… aside from the mud, almost everything has changed since 1984…

I asked him what it was like riding the Northern classics supported by a team assembled to win Iberian stage races, he explained; ‘I remember I was talking to the boss of Kas on one occasion and he said he wanted results in the south of France and Spain, he said it was too cold up in Belgium to sell soft drinks, and besides the Belgians only drank beer!
“It was difficult though coming in to the finale with no team-mates and I had to use tactics where I worked off what the other teams were doing.’

The spring of 1986 had seen Kelly lose the Tour of Flanders to Adri Van Der Poel [Holland & Kwantum, winner of seven classics and the world cyclo-cross championships during his 19 year career], the Irishman’s recollection of this is almost identical to Max Sciandri’s description of letting the 1996 Milan-San Remo. slip through his fingers; ‘Four of us were away and I did most of the work over the last 18 kilometres, I felt that I couldn’t be beaten, I had the sprint won in my mind.’ Van Der Poel didn’t feel the same way however and pipped Kelly to take the ‘Ronde’.

Kelly made no such error at Roubaix, letting Van Der Poel chase down Ferdi Van Den Haute [Skala, Belgian pro champion in 1987 and a winner of Gent-Wevelgem] who went for a ‘long one’ at the finish. Kelly explained; ‘I think because Van Der Poel beat me at Flanders he thought he could beat me here, but I made no mistakes in the sprint and it was good to get my revenge.’
The late Rudi Dhaenens [Belgium & Hitachi, World champion in 1990] was second with Van Der Poel third and Van Den Haute fourth. 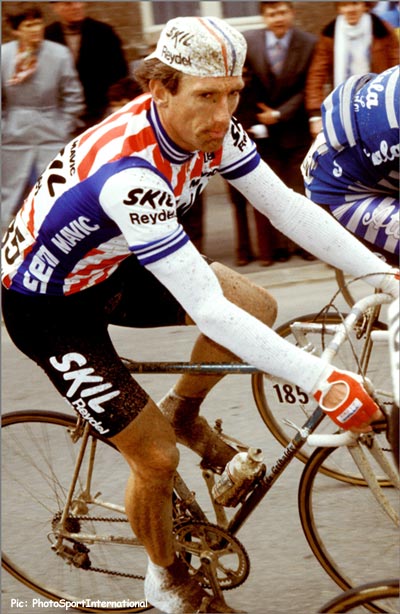 I can’t let the great man off the hook without his tip for 2006; ‘Boonen is in terrific form, better than last year at the same time, but I just wonder if he’s in too good form too soon, last year he got it just right. The other thing you have to be careful of is thinking you can’t be beaten and getting over-confident.’

I asked his opinion on ‘de Peet’, Peter Van Petegem [Belgium & Lotto, 2003 Flanders and Roubaix winner]; ‘I think it’s still early for him, we’ll know better after seeing him in races like the Grand Prix E3.’

And what about Cancellara [CSC, Swiss TT champion and tipped by many to win on the cobbles] I enquire; ‘Yes he’s a candidate but I could list 8 or 10 guys, it’s all down to timing, the rider who has the form on the day, maybe Flecha.’

You can’t argue with a man who has a town square named after him, can you?

– Keep it in the PEZ-gear for more as we dive into Roubaix weekend!

Cobbled Pez: Up The Kemmelberg!