It seems like yesterday that Denmark’s Michael Morkov was a youngster tackling his first six day race in Grenoble and hoping that one day he’d ‘make it.’ He had nothing to worry about. PEZ caught up with the ever improving Dane following teammate Nick Nuyens’ win at Flanders on Sunday.

Since that first six day race in Grenoble, he’s won Worlds gold in the Madison with Alex Rasmussen, Olympic silver in the team pursuit with the Danish squad, not to mention the six days of Berlin, Copenhagen, Fiorenzuola, Gent and Grenoble all with Rasmussen – plus a huge number of Danish and World Cup medals. 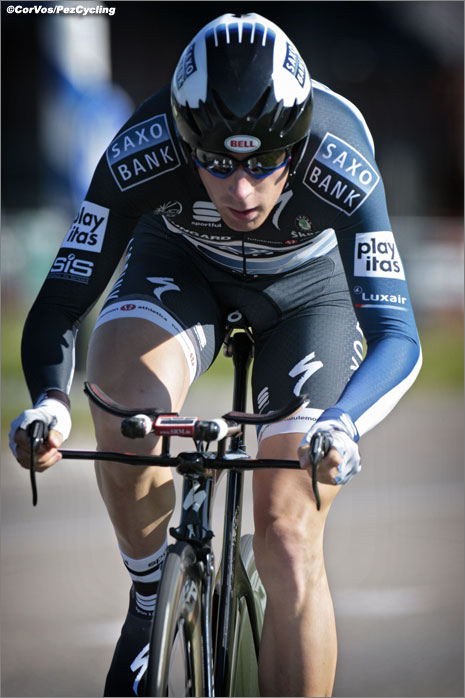 He’s now in his third season with Bjarne Riis’s mighty Saxo Bank team and rapidly finding his feet on the roads of Europe; 2010 saw him finish his first Grand Tour – the Giro; take third in the Danish elite TT championship, fourth on GC in the Tour of Limousin and finish top 12 in the GP Plouay.

This season he’s stepped up another level and has been part of Saxo’s highly successful spring assault on the Flemish Heartland. We spoke to him the day after Belgian team mate Nick Nuyens’ triumph in the Ronde. 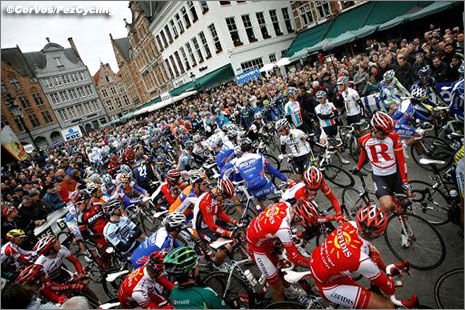 Once again, De Ronde set out from the gorgeous city of Brugge.

PEZ: Congratulations, Michael – what was the Saxo plan for Sunday?
Michael Morkov: To save Nick and Baden Cooke for the final – to bring them into the Oude Kwaremont in good positions.

Unfortunately, it didn’t work out quite like that; Nick got held up in the crash which saw Karsten Kroon break his collar bone – Nick was in about 80th position going on to the Oude Kwaremont, that’s not a good situation and makes his win all the more impressive. 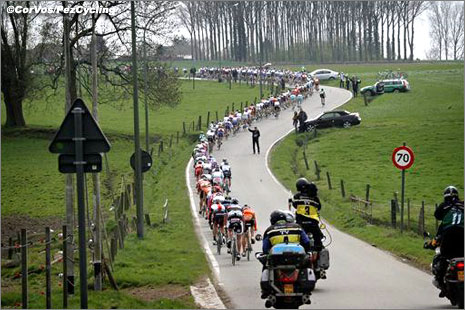 PEZ: Did Nick talk to the team before the race?
MM: No, not really, Bjarne was there to discuss the tactics; but Nick was our rider for the day – especially after his win in Dwars Door.

PEZ: What was your role?
MM: In the first 50 kilometres there were four of us designated to follow early breaks. If the group was big, then we had to participate; the first hour was very hard and it was around 55 kilometres before the break went.

Eventually five guys went away; but there was a Sky (Jez Hunt) and a Cervelo (Roger Hammond) in the break – that wasn’t ideal, we’d have preferred smaller teams to be represented. 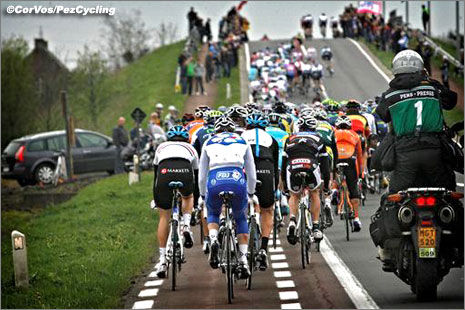 PEZ: This was your first Flanders?
MM: Yes, although I’ve ridden Dwars Door, E3 and Gent – Wevelgem this year so I knew what to expect.

But Flanders is longer harder and there are more climbs.

PEZ: What about the crowds?
MM: Amazing! I wasn’t looking up much so I wasn’t able to look out for the pretty girls; but you could just feel a rush off the people on climbs like the Paterberg; they were lined with people from top to bottom. 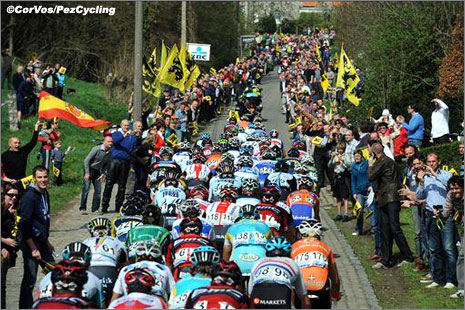 PEZ: I believe the first hour was fierce?
MM: The break didn’t go until 55 kilometres – it was just so damn fast.

You have to realise that for as many as half the peloton, the whole point of their being there is to get in the early break and gain publicity for their team – if they don’t, then their race is as good as over.

PEZ: It must be hard to eat and drink in a race like the Ronde.
MM: It’s really difficult to eat energy bars, they take a lot of chewing and you just don’t have the time.

I get a sore tummy if I take nothing but gels during a race but I had plenty of them in my pocket along with bars – I tried to eat bars whenever I could.

It’s hard to drink too, you’re concentrating all the time – there are always cobbles, climbs, corners . . . 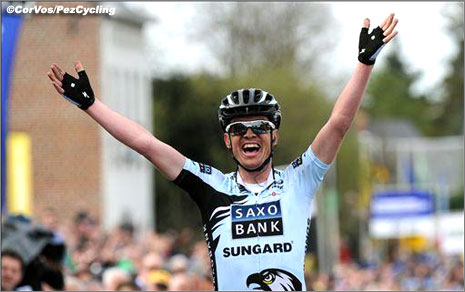 Nick knows the course so well that he can eat and drink with a lot less stress than a rider who doesn’t know the course.

PEZ: Any ‘tricks’ to the bike?
MM: No, just my usual machine but with Zipp 303s – they’re wider than normal and when you ride those with 25mm tubulars you feel like you could ride just about anywhere. 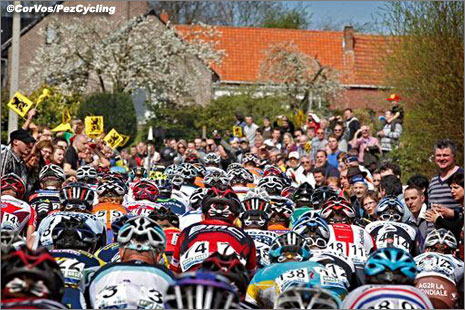 PEZ: How was your race?
MM: It was a hard start, covering the early moves and holding on – there was a split on the Oude Kwaremont and after that it was tough just to get to the finish.

The last 50 kilometres were very hard – I have a lot of respect for the guys who are up there at the head in the finale. 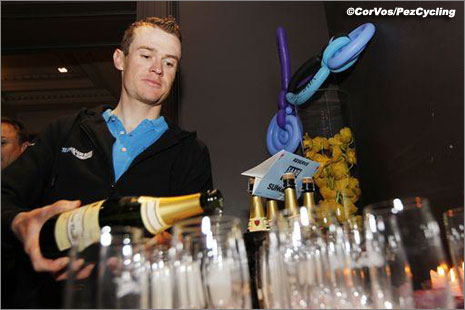 PEZ: Did you get a chance to celebrate after the race?
MM: Yeah, we had a really nice party in our hotel – The Park Hotel in Kortrijk.

Nick’s friends and family were there and the hotel gave us champagne – it was cool. 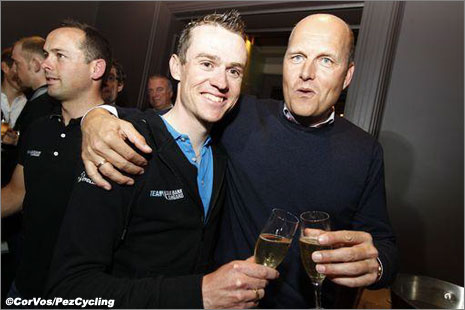 PEZ: Did you get much chance to chat to Nick?
MM: Not so much, we had a few beers together but he was in a different world – and all the journalists and TV in Belgium wanted to talk to him.

He was a very happy guy. 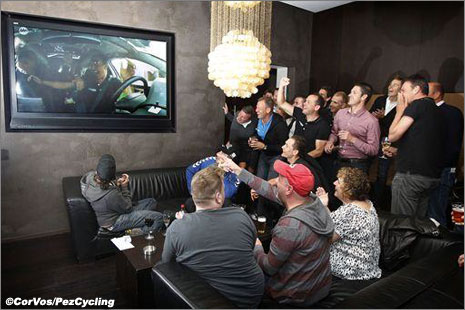 PEZ: How do you feel today?
MM: I feel pretty tired, I cruised for an hour today – I was pretty damn smashed, yesterday.

But my form is good; I’m looking forward to the Scheldeprijs on Wednesday and Paris – Roubaix on Sunday.

I’ll do another easy ride tomorrow (Tuesday) then it’s the Scheldeprijs – its ideal racing midweek because if you don’t than you have to do five or six hours of training; otherwise your body starts to shut down.

It’s like when you ride Tirreno, it finishes on Tuesday but you have to do a ride on the Thursday before Milan – Sanremo.

Thursday we’ll do a course reconnaissance on Thursday for Roubaix then it’ll be easy days on Friday and Saturday. 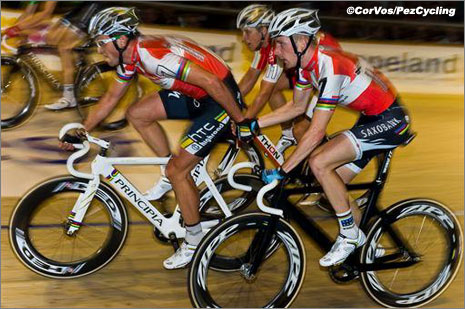 Michael feels that racing the six days was a good way to spend some of the long winter days/nights.

PEZ: Was riding the sixes last winter good or bad for you?
MM: Really good – I think if you carry on to do the track Worlds it’s hard to get back into the road again but doing the sixes in January and February then meeting the other guys in the team at training camps is perfect.

The other guys may have ridden a lot of kilometres at home; but the speed from the sixes is in your legs, which is a good thing.

***
With thanks to Michael for his time and wishing him all the best for the rest of the Classics season.