Scott Sunderland Reaches For The SKY!

As a pro, Scott Sunderland raced all over Europe at the highest level – he came close in the Primavera and Worlds. As a DS with CSC he guided some of the worlds best riders in their finest hours. Now, he’s faced with his biggest challenge; to build a squad from scratch which will produce a British Tour de France winner for the new SKY Television Team within five years.

A tall order? Absolutely; but five years ago what odds would you have got on the GB ‘gold rush’ at the Beijing Olympics? Most ex-pros are only too happy to talk about their “glory days,” but the genial Aussie was much keener to talk about today – and tomorrow.

PEZ: Your most satisfying result as a pro, Scott?
Scott: There’s not really one; but my last year was very satisfying, there were no wins, but I was happy that I’d battled back to the highest level in the sport after my crash (he was hit by a team car during a race and sustained life threatening injuries). To finish the Tour and take my son on the lap of honour, sitting on my top tube – that was amazing. 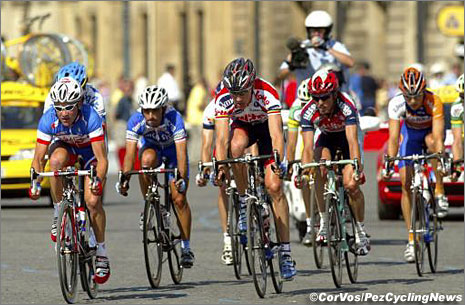 Sunderland didn’t arrive in Paris just as a passenger – he got himself into a strong break on the Champs d’Elysees on that final day. 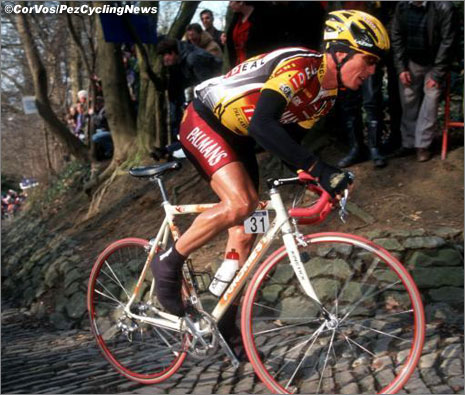 Sunderland was competitive on pretty much any surface.

PEZ: DS at CSC, a dream job, why leave?
Scott: It was a career move; Bjarne Riis is the boss, Kim Andersen is the sports manager, where could I go? Maybe they could have fiddled about with my job but effectively it would have been a sideways move. Anybody that knows me will tell you that I can’t sit still, I need progression. 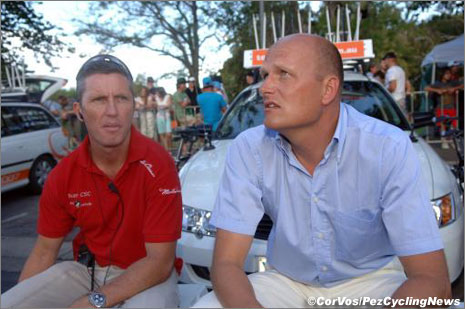 PEZ: I’ve heard it said that you can’t part with Riis and remain on good terms?
Scott: I still talk to Bjarne, I rang up to express my regrets when he hit the problem with IT Factory. I’m still friends with Kim; there’s no hard feelings, Bjarne and I are still on good terms. 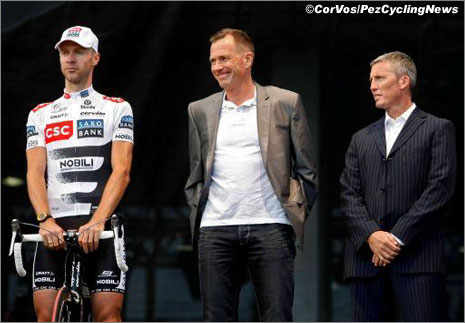 PEZ: What happened at Cervelo, you were going to be manager there?
Scott: I can’t say a hell of a lot, but we had different views about the direction the team would take.

[It was another ‘move on’ moment!]

PEZ: You had a lot of input on the design of the Cervelo R3, did you ever consider moving in that direction?
Scott: I’ve always been very interested in the quality of bikes that a team rides. Personally, I’ve ridden some shitty ones; so I try to make sure that the riders get the best. I put all my energy and knowledge into getting the guys at CSC the best bikes possible. I didn’t just work with Cervelo; I worked with Vittoria on getting the ultimate tyre for Paris – Roubaix and with Zipp on their Carbon Classic wheel. I tried to draw the clearest picture possible of what the riders need; most of the time that feedback from rider to engineer doesn’t work properly – I made sure that it did. 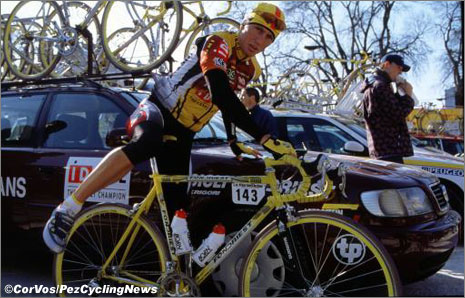 PEZ: What’s your philosophy as a DS?
Scott: Good communications and respect. Respect for each other as riders and for all of the staff. Sometimes people would say I was a little tough on riders; but look at the girls working until all hours in the office to make sure that the flights are correctly booked; the mechanics working all night to make sure that the bikes are right; the soigneurs up until the middle of the night – they’re all human, not machines, they all deserve respect. 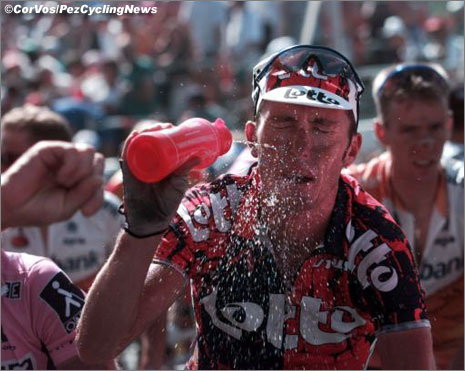 PEZ: Where’s home, Aus or Flanders?
Scott: Flanders; I long for Australia, but I feel good here – I spent 20 years in Australia, but 22 years here in Belgium.

PEZ: The SKY TV team, how did you come to be sports manager?
Scott: Shane Sutton (GB’s Aussie head of coaching) mentioned to me that there was something on the cards around Olympics time and when they came back with all those medals, it really started to gather momentum. David Brailsford (the man behind GB’s meteoric rise to the top of the World’s track rankings) had been talking to Sky all during that period and in November they had me over to Manchester. He showed me the plans and they were fantastic.

PEZ: I’ve heard that Brailsford has computer spread sheets of ‘target riders,’ based on performances?
Scott: Part of my job is to produce a list of rider who will fit in with the team’s philosophy and requirements. We want to build a team which can cope with any parcours and has a mix of young riders, experienced riders, sprinters, climbers and time triallists. We’ll be looking to recruit 25 riders and go straight in at Pro Tour level; we’ll need results right away and we’ll be making no assumptions about the races that will accept us. 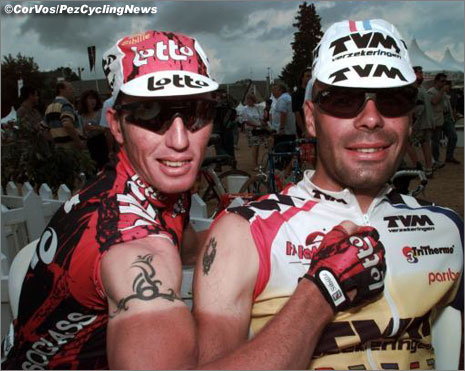 Hey, it doesn’t all have to be serious, does it?

PEZ: Is Cav a target?
Scott: Mark Cavendish is under contract with Columbia until 2011; I’m only interested at the moment in riders who are available for season 2010.

PEZ: Big bucks will need to be spent?
Scott: It depends how far you want to go with it, there’s the basic requirement to do the job and then there are the additional ‘shiny bits.’

The look and ethos we want is of a Formula One team. We want it to look the business; but the number one criteria is to get the performances – results on the bike.

PEZ: What’s the programme?
Scott: Being Pro Tour allows you to get in to the major events, but the key thing is to sound out the organisers. We’ve been out introducing ourselves to the UCI and ASO, meeting the people who decide. 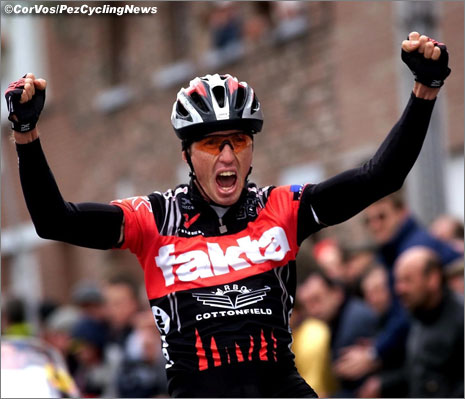 Scott was no stranger to winning – here we see an emphatic salute after taking the GP Pino Cerami.

PEZ: Goals?
Scott: We want a dynamic, competitive team; we want participation in all major events during season 2010; we want to be competitive in those events. But our main goal is to have a GB rider going for victory in the Tour de France within five years.

PEZ: That’s a tall order!
Scott: Yes, it is; but why can’t we do it? Look at Geraint Thomas, four years ago, bike racing wasn’t that big a deal in his life – now he’s an Olympic team pursuit champion. There’ll be huge support from Manchester; coaching, psychiatrists, psychologists – not to mention the R & D side on the bikes, nutrition, clothing. It’s realistic – look at when Lance came back, who believed that he could win the Tour; he won seven!

PEZ: David Brailsford, is he as you expected?
Scott: Very analytical; meticulous, he dots the all the I’s and crosses the T’s.

As sports manager, I’ll be around the races, making sure that everything is happening as it should. But I’ll know that the support and help is there from David and Sutton, should I need it.

***
Scott Sunderland surely has the biggest management challenge anyone has ever taken on in the sport of cycling.

But all great endeavours begin with a single thought and if anyone can manage it, then it will be this man. One thing is sure; he won’t waste any time thinking about the ‘what might have been.’