We were stoked when Sean Kelly – a true legend in cycling – agreed to talk with us not long ago. The interview barely got started, but the conversation could have lasted hours – he was happy to chat, engaging, and as expected, full of amazing stories from his racing days. In Part 2 we talk racing – Paris-Nice, The Classics, and battling Lemond at the Worlds. 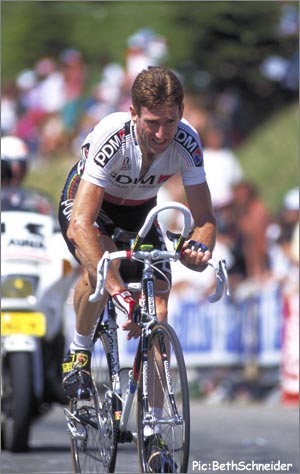 We pick up our conversation as the racing talk starts up…

PARIS-NICE – 7 TIMES!
PEZ: How about Paris-Nice, where you were brilliant? (A mere 7 consecutive wins!)

Well, I suppose the first 2 or 3 years I won it, in the early season, I had a good training programme and got form quite quickly. Maybe I didn’t need as much training as some of the other riders who needed more miles. I guess that’s the answer to my Paris-Nice results.

As the years went on, after I’d won it 3 times I said to myself that I’d concentrate more on the Classics …….. but in Paris-Nice I was unbelievably unlucky …… luck was on my side a lot of the time because I was in breaks that I never really tried to get into.

I found myself in the important breaks that put me in a position to win, and I won a lot of the latter ones [that way] …… my shape was nowhere near 100% but I got better and better as the race went on. Some races you have luck on your side all the time, and Paris-Nice was the one for me.

PEZ: Indurain ended your reign at Paris-Nice, didn’t he?

No, actually when I joined PDM, there was a change of programme so we went to Tirreno-Adriatico, then I went back to Paris-Nice a year later and I crashed at a feeding station and broke my collarbone. So that put me out, and after that I was struggling to be in form that early in the season.

The WORLDS
PEZ: There were races where you weren’t so lucky – I guess the Worlds are the main one that you regret not winning?

Yeah, well, it’s the race which should have suited me. A one-day race like that was my strongest point. It is a regret not to have won it. The best part of my career, the biggest problem was that you had 5 weeks after the Tour (the Worlds were held earlier then – .ed) where you had no team commitment for races, it was mainly criteriums, so you did maybe 3 or 4 weeks of that full-time.

It was just the worst preparation for the Worlds – you had a few events like the Tour of Limousin and so on, and some Belgian races, but the Worlds just came up too quickly. My shape was never as good for the Worlds as for the Tour of Lombardy or Paris-Tours which came at the end of the season. That’s the reason that my chances in the Worlds suffered.

As time went on, when I was with PDM and Festina after leaving KAS, the programme and the calendar changed. After the Tour, you had the San Sebastian which you had to do. The criterium circuit got smaller, because the teams had the pressure to do the World Cup. My Worlds performances got better towards the end of my career but my best years were over by then. 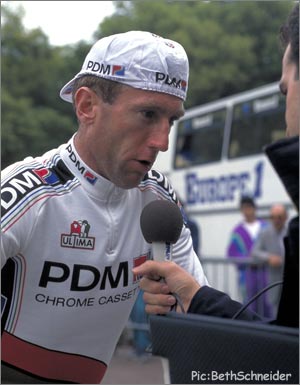 PEZ: I guess the 1989 Worlds where Lemond got you on the line must have been one of your hardest losses?

Yes, that is one of the most disappointing ones. You know, to arrive in the sprint and to be beaten ……… it was a bitter one to take at that moment. There’s nothing I can say against Greg. That day, he was extremely strong. When Fignon attacked with one kilometre to go, he just reacted and closed him down and carried on in the sprint. He was amazing in the final, amazingly strong, and there was nothing I could do. Normally in the sprint, I’d beat him 3 times out of 5, but, unfortunately for me, that was one of his great days.

PEZ: You were pretty hot in the Classics – 10 wins in all. Which was your favourite Classic? I’ve read before that you actually liked ones that didn’t suit you so much like the Tour of Flanders …

Sean: Which was the one I loved the most? Well, I guess I’d say Liege-Bastogne-Liege or the Tour of Lombardy because that was a pretty clean race. L-B-L with all the hills was a bit heavy for me but I managed to get through it. But against some of the very good climbers, I wasn’t the one in charge. You could say I was just trying to keep in control, keep in there, and I knew if I could get to the sprint I always had a better chance.

Paris-Roubaix and Flanders would be very good races, but I wouldn’t say I loved them because they were horrible races to ride but wonderful to win. You know, Paris-Roubaix is the greatest one to win but so dangerous and there’s so much fighting going on and the risk of falling. I can’t say I loved it, but I got through it and did the job and when you’re one of the big favourites to win, I suppose you do like it to an extent.

PEZ: What was your best win?

Sean: Well …one I can remember was my first Classic, the Tour of Lombardy. I can remember the sprint pretty well (you probably know the famous pic of Kelly, Lemond, Van der Poel and Kuiper diving for the line – Ed). Some of the later ones aren’t so clear, so that proves that the first one is always really important.

In latter years, winning Milan-San Remo when I came back to Argentin in the last kilometres. For that one, my best years were over and I wasn’t a favourite. The style that I won it in …….. with Argentin going over the Poggio with 15 seconds. At that point, anyone who had 15 seconds at the top of the Poggio always went on to win. For those reasons, I guess that’s a great one.

PEZ: What about your hardest day?

Sean: It’s always the days where you fall and break something and you’re looking at a minimum 3 to 4 weeks out of competition. Those are hard to take. Like the one I mentioned when I fell at Paris-Nice, you’re just leading into the Classics season after all your hard work and training … it’s all over for the Classics then. That was a bad one. And then there was the Tour of Flanders – I crashed one year and broke a collarbone.

There was some days where I ran into trouble in the Classics, my form was a long way off what it was in my great years ……… those are some of the days you suffer the most but you just try and try to stay in there, but you suffer a lot. I can remember a few of them. I remember one year in the Tour of Flanders when Vanderaerden won it in really bad conditions with lots of mud, and I was suffering badly in the last 30 or 40 kms ….

PEZ: I read once that you said Vanderaerden was one of the riders you feared most. Was he one of your hardest opponents?

Sean: Yeah … well, fear is not the right word, but he was a big enemy! You knew that in the Classics he was one of the ones you were going to have a problem with, but that works both ways. And then there were lots of other riders during my career. You look at Eddy Planckaert, and there was Steve Bauer, too. Maybe Bauer wasn’t as consistent, but when he was on a good day he was a difficult guy to manage in the Classics, in Roubaix and Flanders especially.