Sean Kelly… “has been Pez’d!! I spoke to him this lunch-time, and he was cool. Like a budgie with 2 beaks in fact, as he talked virtually non-stop for 45 minutes!!” So read the email from Gord after connecting with the great Irish cyclist. In Part 1 we asked Sean about his getting started with his early career, and how he sums up today’s top pros… 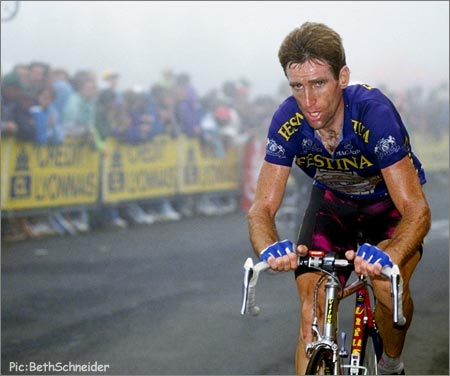 Kelly was one of those champions that inspired all of us on this side of the Atlantic, storming the Classics and winning the Tour’s green jersey 4 times. After watching Kelly and Stephen Roche, Robert Millar, Phil Anderson, Sean Yates, Greg Lemond and all those guys on TV, I’m not the only kid who ran out of the house and jumped on a trusty BMX to go and replicate a sprint finish.

Primed to speak to the great man after the very generous help of his agent, Frank Quinn, I decided the best course of action was to hone a list of good questions so that I wouldn’t sound totally star-struck.

Once I managed to hook up with Sean, and he started talking, I just put the questions away – Kelly was just fascinating to listen to, and a very nice, modest guy with it.

IN THE BEGINNING
PEZ: When you broke into the pro ranks, Jean de Gribaldy signed you. Is it really true that he just turned up at your parents’ farm with a contract?

Sean: Yes, that’s true! I went to compete in France in 1976. I was there for maybe 6 months at a club in Metz, had a lot of good performances, won a lot of races. I competed in the Tour of Britain (in 1975) with the Irish national team. I got suspended from the Irish team after going to race in South Africa, so I would definitely have been in the team for the Olympics, so missed the 1976 Games. Then I decided to go to France.

[Kelly and another couple of Irish racers got busted accidentally by a British journalist sent to South Africa to tail Liz Taylor and Richard Burton! – Ed]

Towards the end of that year in France I got offered a contract by de Gribaldy. He made contact with me through the club although I never actually met him but I said no, that I wanted to stay amateur as I was still quite young. So I came home to Ireland, and then he just arrived at my place in October with a contact.

PEZ: He must have been an amazing guy, what was he like?

Sean: As a directeur, he was a long way ahead of his time. He had some great ideas. He was 10 years ahead of everyone else on diet. He was clear about what you could and couldn’t eat 10 years before the other teams started to think about it.

He was a big influence on my career. In terms of training, he was a long way ahead. In those times, riders did unbelievable miles on the bike. They’d go out and do 5 and 6 hour marathons everyday.

In my time, he was the guy who’d make you do shorter rides of quality as well as a long mid-week ride. That was 10 years before specialised training programmes – I realised this because I’d been through it already, so he had some unbelievable qualities.

He had a few that weren’t the greatest, though! Racing – he said to do 100 or even 150 races a year was no problem because “you can never get tired!” He said it was all in the mind, because people would be telling you all the time that you’d get tired racing, but that you’d never physically get tired, which is something I don’t agree with!! 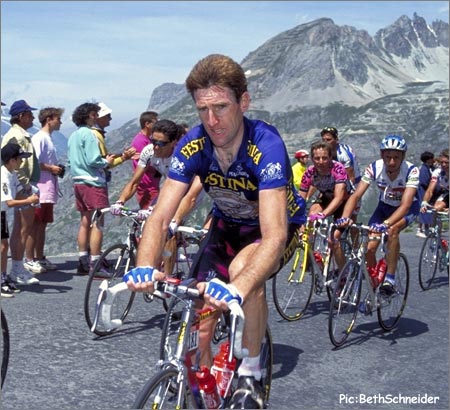 PEZ: When you were a pro first, you were in the same team as guys like Freddie Maertens, a phenomenal champion.

Sean: When I went to Flandria with de Gribaldy, he had the Flandria France team, a young team with mostly new professionals. We were mostly doing second string events, but occasionally we’d get put in bigger races with guys like Maertens.

The first year, I got sent to Paris-Nice because I was riding well early on. So, to ride with him in my first year as a pro in Paris-Nice was difficult. He won that one, but it was a lot of work.

And there were guys like Marc Demeyer as his right-hand man calling the shots, telling us what to do. It was a difficult baptism for me, but an unbelievable experience to be racing with Maertens as World Champion. To be working for him in my first year was a bit frightening at times but a great experience!

PEZ: What about Michel Pollentier?

Sean: Pollentier was also in that Paris-Nice, so you can see the team that I was riding with. Pollentier was a very good guy also, and speaking English like all the Belgians and Dutch do very well, he made me feel like I was a part of the team.

PEZ: How hard was it to break through? I mean that’s some first race!

Sean: Well …. it was a bit easier than it is now. There are so many riders, especially from Eastern Europe, who are very hungry to be successful and make a career as a bike rider. There are bigger numbers wanting to make it now.

The style of racing has changed, too, with the World Cup – everyone wants points, because points decide what contract you get. It’s more difficult now. In my time starting out, there were maybe 2 or 3 riders in the team capable of winning and the rest were domestiques and you did your job. If you were good enough and you had the qualities, you could win some races and hopefully become a leader. I see it as a bit easier now than when I was starting my career – but the World Cup and UCI points races changed the style of racing a lot.

THE CURRENT CROP OF SUPERSTARS
PEZ: What do you think of the current stars, such as Lance Armstrong?

Sean: Well, no one ever gets lucky to win the Tour de France! Armstrong is an unbelievable rider. Some might say he hasn’t got any opposition but he’s such a class rider. The way he prepares for the Tour is fantastic.

He got a scare from Ullrich in 2003, and I don’t think he expected anyone to challenge him as much as Ullrich did. Ullrich had him on the ropes in the mountains at times but he came back. This year in the Dauphine it looked like his best years were gone, but it was all planning. He came to the Tour as a different animal, a different man. Lance can do that.

Sometimes when you do it (win the Tour!) a couple of times, you take it for granted a bit. Last year he almost got knocked off at the Tour. What he does … concentrating just on the Tour … if you can win the Tour de France the way Lance does, I think that’s enough! The team is really happy – the exposure they get from 3 weeks of the Tour is like 60% of the whole season.

PEZ: How about Damiano Cunego?

Sean: This he year he had an unbelievable season, he was there right through the whole year, and the performances he put in show him as a great talent. I can’t see him doing another year like that though. He’s capable of it, but ….

Sean: Well, he’ll be marked so much more, but that’s not a problem for him. He can still do just as well, but his team will look at it and get him to concentrate on specific events. That’s just the way it is now. There are targets. 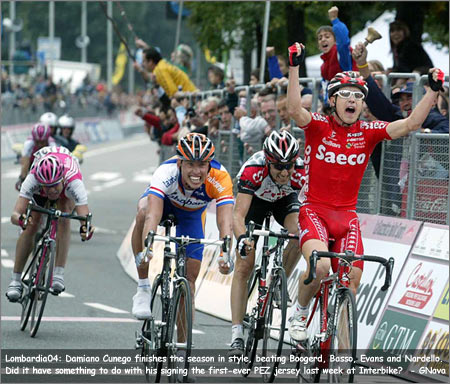 PEZ: How about Valverde?

Sean: Again, a class rider. His style makes him look like he can be a very good Tour rider, and if he can become a little stronger in the mountains and the Time Trials, then he’s a potential Big Tour winner.

PEZ: Do you look at Tom Boonen, and think: “This is the guy that’s most like me?” because of the way he wins sprints and what he did in Gent-Wevelgem this year?

Sean: Boonen had a fabulous year for his age, and he’s proved he can do it. In Belgium, he’s been hyped a lot before this year, and I worried that he wouldn’t be able to handle that pressure. He was being made champion before he was, performance-wise, but this year he’s shown he can win big events.

Sean: Hmmm, do you mean the most talented? That’s difficult. It depends on what events you’re talking about but Cunego would be the one. He can do it all. He’s won a Giro already, he’s won a Classic (Lombardy), he’s winning in the sprints in small groups. A really fast rider, so for me, at the moment, he would be the one.

PEZ: When Armstrong’s time finally comes to an end, who’s going to be the guy that wins or establishes himself at the Tour?

Well, will Lance do the Tour next year? If not, it’ll be really interesting. I think if Cunego keeps improving …. I think he can, given his age …… and then you’ve got Valverde. Basso will be in there as well. Those are the ones in the shadows at the moment.

PEZ: Now that you’re doing TV commentary work with Eurosport, how do you feel watching the races you once dominated?

I don’t have any favourite races, really. The Classics are great to watch because I’m so familiar with the terrain. I’ve gone over those bergs in the Tour of Flanders, and the cobbles in Paris-Roubaix – I know those cobbles so well. The Classics are always exciting to watch.

And stay tuned for a lot more from our interview – we talk tons more racing including his domination of Paris-Nice, the Worlds against Lemond, and his Irish contemporaries…