Rider Interview: The SEG Racing Academy is bringing through the next generation of champions and Georgios Stavrakakis – ex-Euro Junior Pursuit champion – is a new name on the team roster for 2018 and has a bright future. Ed Hood caught up with the man from Greece to hear his plans for stardom. 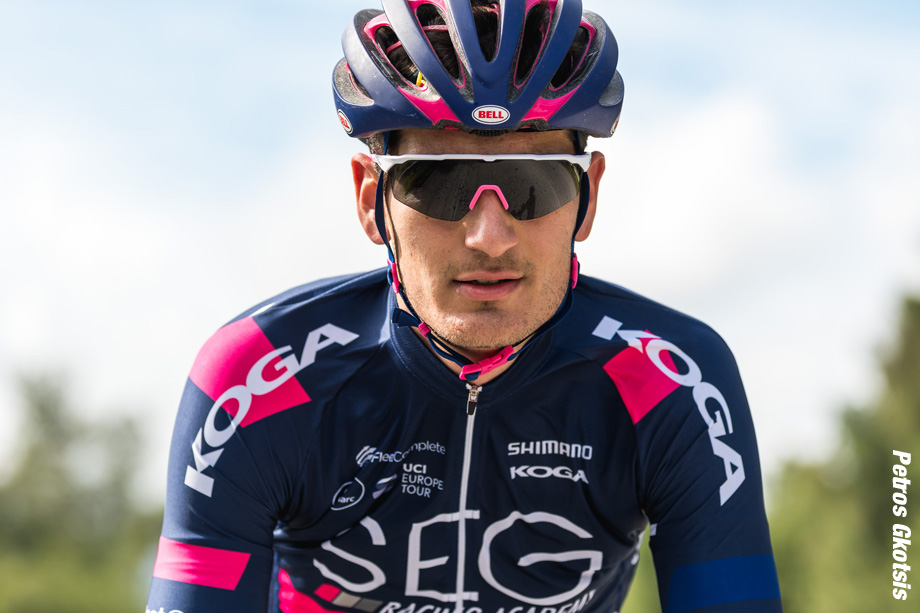 We were having a look at the 2018 team roster for our friends at SEG Racing in The Netherlands when we spotted an unusual name in there, ‘Georgios Stavrakakis’ all the way from Greece. What’s more he was European Junior Pursuit Champion in 2016, had wins in France the same year and raced in Belgium, last year.

PEZ: How did you get into cycling, Georgios?
Georgios Stavrakakis: I started riding my bike for fun when I was five years-old but none of my parents were cyclists or even rode their bikes. When I got older, around eight years-old, I liked to ride a BNX bike, doing some tricks, then a cycling coach friend of my father told me that I had to go into cycling. I started my first MTB race for fun without getting any results. After that I stopped and did not race for one year. Then I fell in love with the sport and I started training properly. 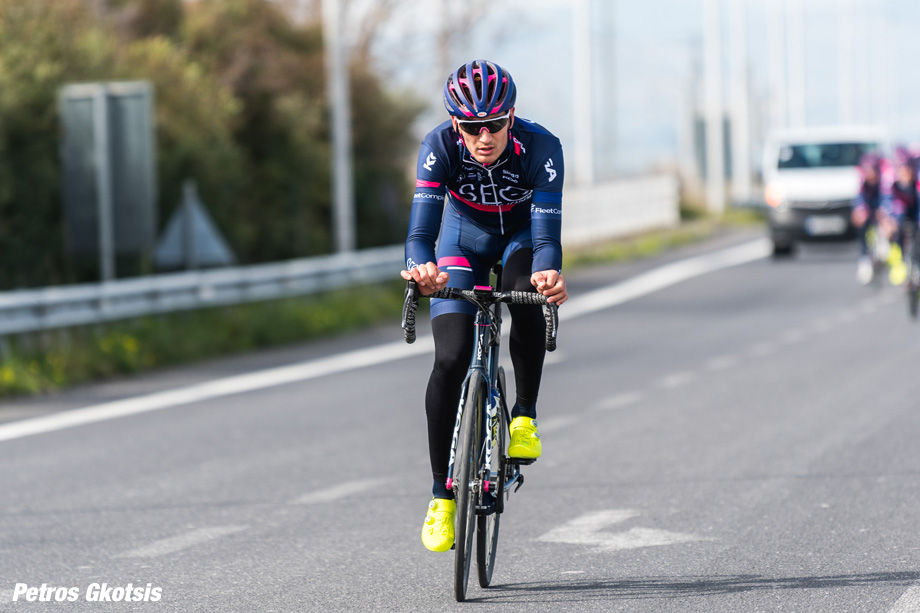 PEZ: That’s the cycling scene like in Greece?
That’s a really tricky question. The economic crisis in Greece has affected everything in the country, and cycling teams and federations have been no exception. Some years ago the Greek cycling scenario was way better with three continental squads and a strong national team structure. But right now the situation is totally different and it is harder to develop yourself as a bike rider as most of the times you have to do everything on your own.

PEZ: What was you first race and how did it go?
The first race that I can remember was really hard one. I didn’t have a good bike and I pushed way harder than the other opponents. The result was not so good and after that I didn’t want to ride my bike again.
But after some days I just forgot about it and rode again.

PEZ: How/why a pursuit rider?
I never knew that this could be a good discipline for me, back in 2015 I was part of UEC camp in Athens just before the European Track Championships, were the coach one day told us that we have to do some tests, including a three kilometer pursuit. That day I rode a National record ride by 2.5 second. But one week later I smashed the record by three more seconds with a final time of 3:22:636 and finished 11th. After that I knew that I had potential on it and I could work hard for this for the next year in order to take a medal in Euro/Worlds Champs. 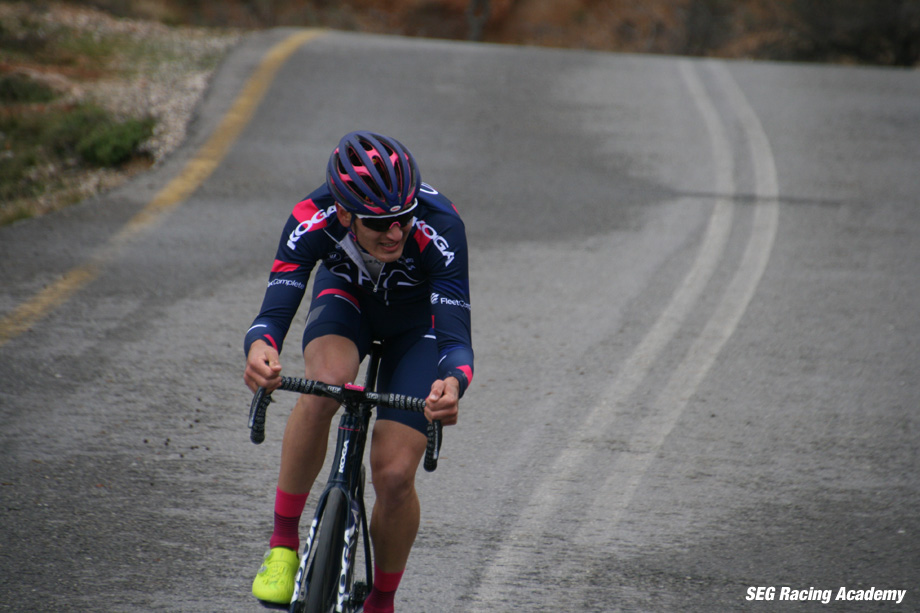 PEZ: Tell us about your preparation for the European champs.
That’s a good story to tell I think. I was having exams in school on May 2016 and every day I was doing three training sessions; two on the road and one in the gym. Sadly my home is far from the Olympic velodrome in Athens and I was not able to ride the track. So I did the whole preparation in the road with my road bike. Just two weeks before the Europeans I took the track bike and rode a little on the track.
So the whole preparation was with little training on the track, but luckily I could work with my coach with the scooter and doing some good rides and interval behind it, I think that helped me a lot.

PEZ: You were with French team Nantes Doulon VS for 2016; how did you get that ride?
When I started preparation for 2016 I had to do a lot of school work If I wanted to get into any university, but as I was getting closer to the start of the racing period my performance was so good that I didn’t want to waste maybe the best cycling year of my life. So I thought that bike should be my first priority. I decided to go somewhere in central Europe where cycling is well developed to gain experience and become better rider. I was in contact with the owner of that team and he gave me the chance to be a part of it. 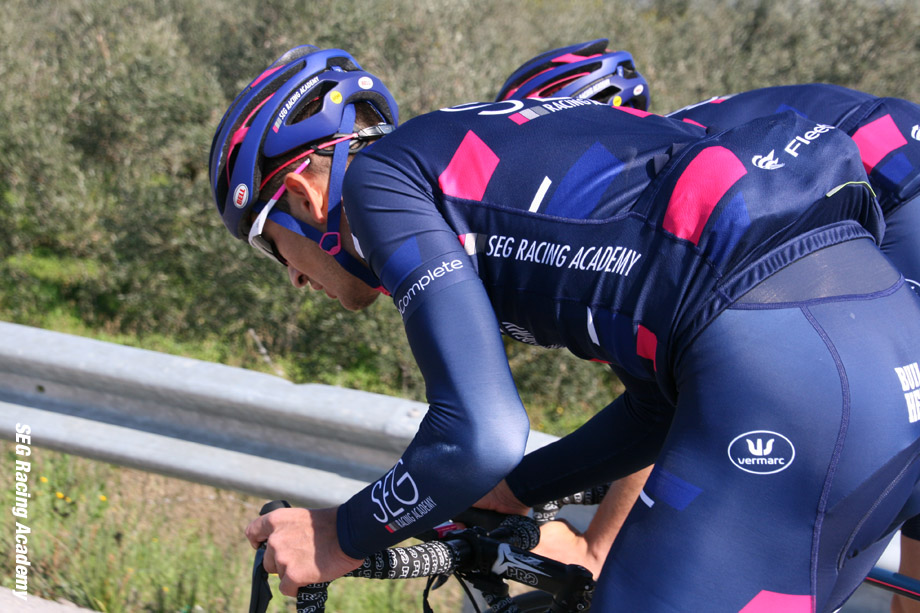 PEZ: Tell us about your results in France.
To be honest I did not know what to expect. In my head I had the idea that everything would be harder and different to what I was used to, but I finished fifth in my first race, I stepped on the podium on the second one and in the third one I got my first win, so it was kind of a dream start. After that I was finishing top 10 in all the races and I was able also to win one more race before I went back home.

PEZ: Then Belgian team Home Solutions-Amapa-Soenens in 2017, how did you get that ride?
I was being scouted by SEG Racing Academy that year and they helped to get in contact with a good team in Belgium and the Netherlands. Looking back I think that I made the right choice as I learned to race in wind, rain, narrow roads and in some big races which helped me learn a lot and develop myself.

PEZ: How did you take to the Belgian climate?
The weather was really good, at the beginning I was staying together with a rider of the team in one apartment which was a good experience. All the team had a good attitude towards me and that helped me to acclimatize to the Belgian weather and lifestyle really quick. 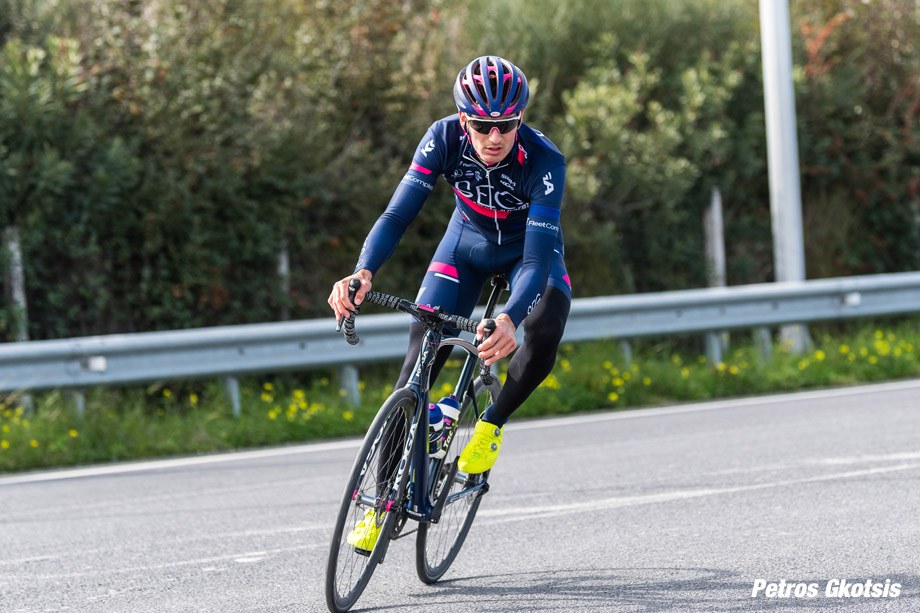 PEZ: Tell us about your results in Belgium.
I was several time in the top 10 and twice on the podium. I feel like sometimes I was really close to the win, but I lacked some patience and experience. But I am happy how with how I rode the whole year there and I’m ready to carry on all that experience into the coming years.

PEZ: How did you connect with SEG?
After I won the Junior European Championship on the Track, SEG Racing Academy’s Performance Manager, Vasilis Anastopoulos spoke to the team about me and they were interested in me. They wanted to see how I would develop in 2017 in some smaller races and then if I had the potential and some results they would add me to the roster of the team for 2018. 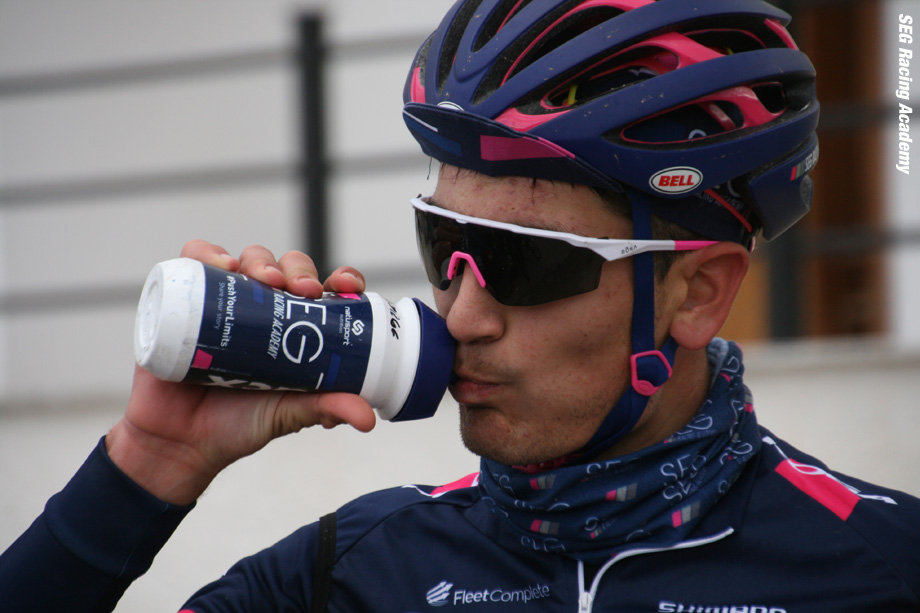 PEZ: Have you met your team mates yet?
Yes, we were together in the team building camp back in November and had during the recent two training camps in Loutraki.

PEZ: Where will ‘home’ be for 2018?
It will be at my own home, in Chania Greece, I will be traveling for some races and normally after the finish of them I will be returning home. If the gap until the next race is small I will stay in the CTO in Eindhoven. 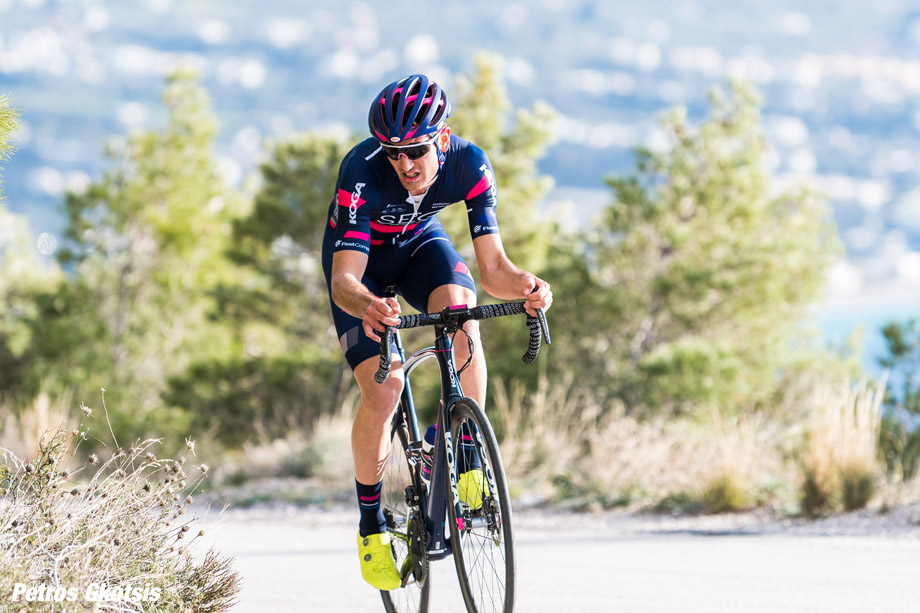 PEZ: Do you have a coach – what’s the philosophy?
Vasilis Anastopoulos has been coaching me since the beginning of 2017 and he has helped me a lot to develop myself. He doesn’t have a really special philosophy, it is all about training hard, recovering well and improving your skills through racing and training.

PEZ: Do you see yourself riding on the track again in the future?
I would really like to participate in track racing again, in Tokyo for example! It is a nice goal to set, but things will change a lot until we reach that date. I really love track racing and one of my cycling dreams it is to achieve something bigger there. But right now I am focused on the road. 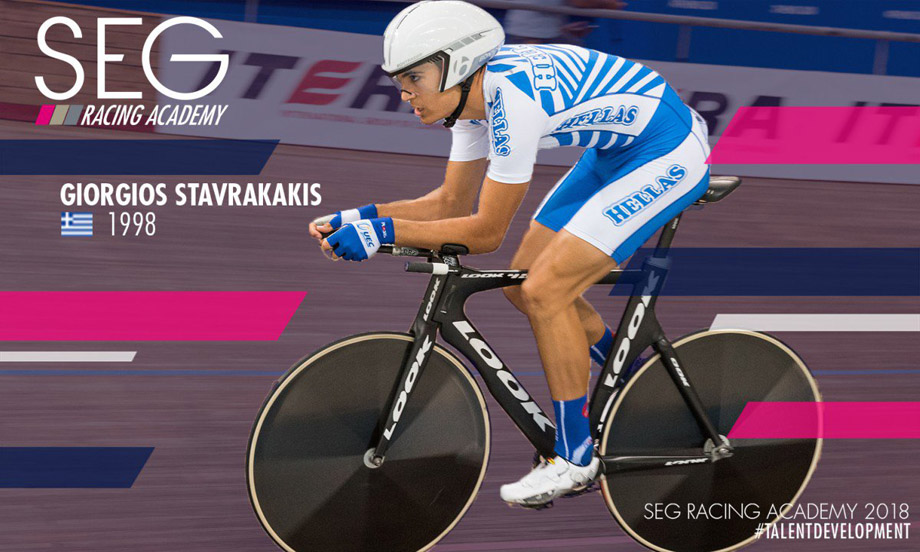 PEZ: Tell us about your 2018 program.
I will start my season with Ronde van Groningen and Houtse Lines in the Netherlands and after that I will race the Triptyque des Monts et Châteux at the beginning of April.

PEZ: Season 2018 will be a success if. . .
I can be the best version of myself. My main goal for 2018 is to learn as much as possible and try to show myself in some of the big races in the program.

# With thanks to Georgios and David Soteras at SEG Racing. # 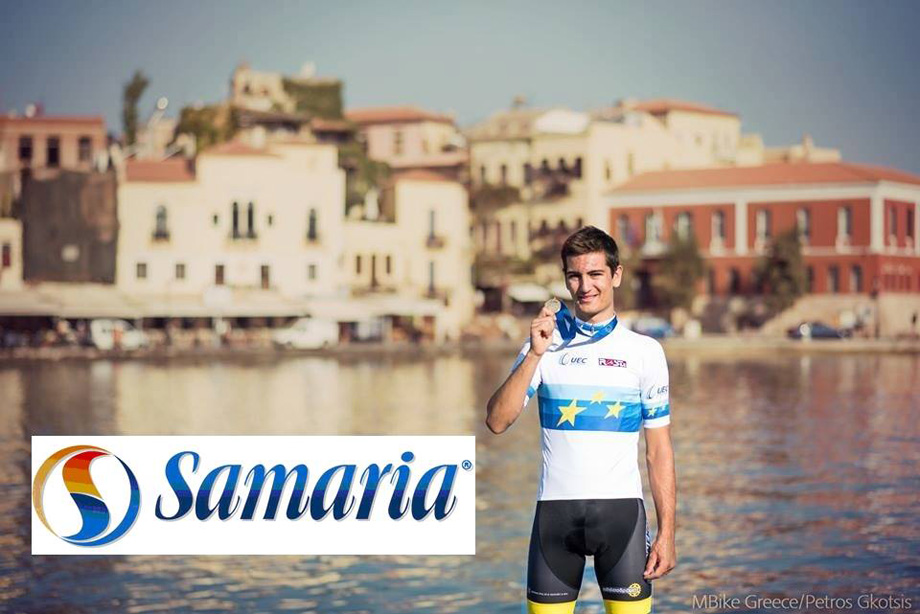