Rider Interview: Next up in Ed Hood’s ‘Young Guns’ interview is from The Netherlands and is following in the footsteps of Fabio Jakobsen – Quick-Step Floors 2018 revelation. Cees Bol has been making regular appearances on the podium for the SEG Racing Academy this year and showing great promise for the future. 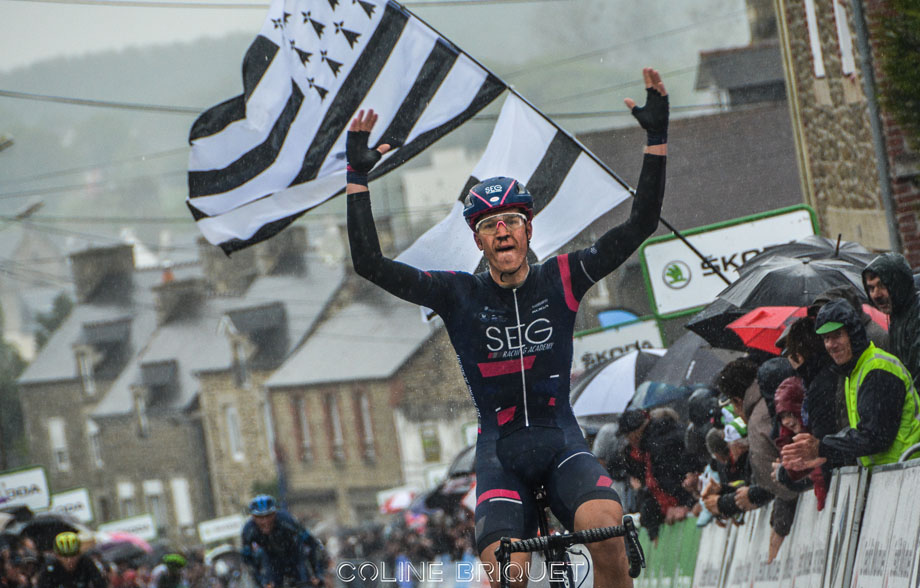 Last season it was SEG Racing Academy’s Fabio Jakobsen setting the European U23 scene aflame. The young Dutchman signed for Quick-Step Floors for season 2018 and already has three notches on his top tube: Nokere Koerse, the Scheldeprijs and a stage in the Tour of the Fjords.

SEG Racing Academy have another young Dutchman harvesting the results this season with 19 top 10 finishes and 10 podiums. In line with the PEZ policy of catching them on the way up; we introduce you to 22 year-old Mr. Cees Bol.

PEZ: You’ve had 19 top 10 finishes, this year Cees – how do you achieve such consistency?
Cees Bol: Obviously the most important thing is that I’ve been in good form. That is the result of training hard, resting and getting a solid base during the winter period. Next to that, I want to say that I’ve learnt how to try to get over a mentally challenging day and still take the most of it. 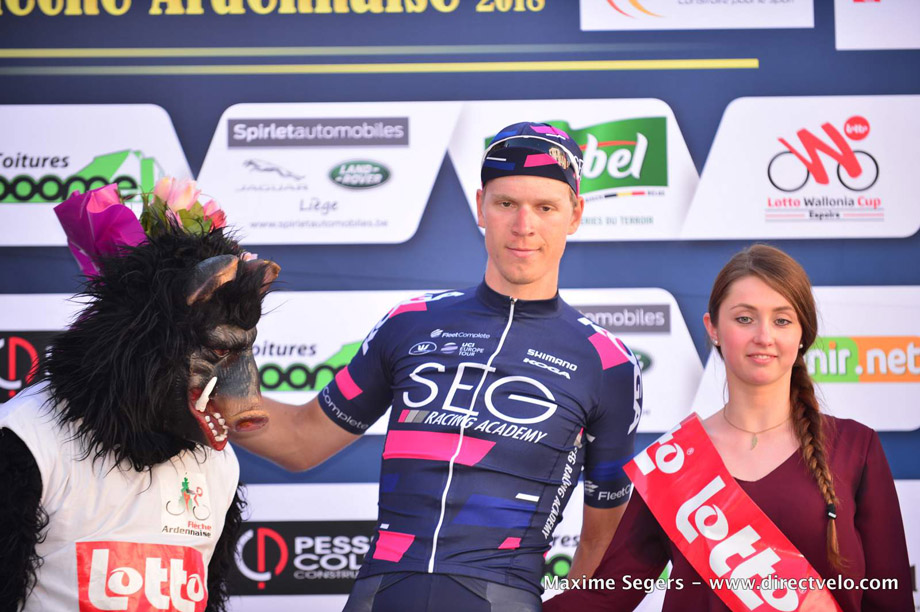 PEZ: How many podiums/wins?
Three wins, six seconds and the points jersey in Tour de Bretagne so that’s 10 times on the podium then.

PEZ: Which win are you most happy with and why?
Probably the one in Tour de Bretagne. It was a goal of mine since the beginning of winter, so working hard for it and seeing how it turned out it felt really good. The atmosphere and the teamwork we achieved that week was massive, so it felt extra good to win it.

PEZ: You were second to Bouhani in the GP Marcel Kint, that must have been quite an experience; how do you rate his sprint – he has a reputation as being a little ‘wild’?
Of course I know his reputation but from my experience in that race I have to honestly say that he didn’t put up any fight or dangerous moves. Overall there were no fights in the final so we can say it was an honest sprint and Bouhanni was clearly faster than the rest. Anyway, I’m happy to be best of the rest in a race like that behind a world-topping sprinter like him.

PEZ: How did you get into cycling?
In my memory I have always raced bikes. When I was really young I remember riding around the neighbourhood with other kids. When my parents took me to the club that my sister was training (I was six years-old) I could borrow a bike and join some of the training sessions. I felt in love with it since the beginning. 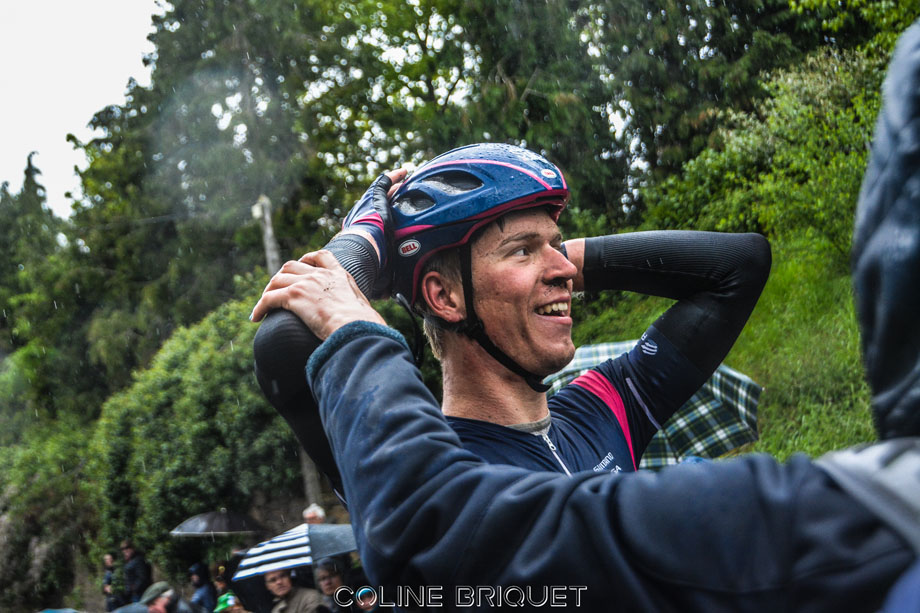 PEZ: You were with the Rabo Development squad for three seasons, what was that experience like?
Rabobank Development was a really good team. I came in there from the U19 ranks with a lot of steps to make, mentally and physically. They were patient and helpful with me and the teammates were great as well. The result of that was that I made big steps every year I was there.

PEZ: How did the SEG Racing Academy ride come about?
I already knew Bart van Haaren (Academy Manager), and we had a good relationship. I had a good year in 2016 but we agreed that it would still be possible to make big steps as a U23 in a development team, so we made that happen. 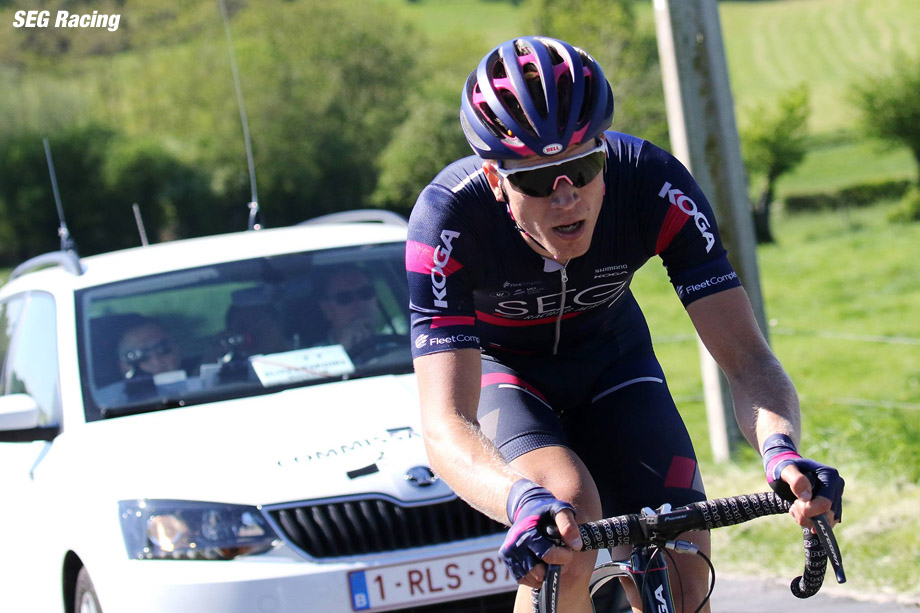 PEZ: You are obviously very happy with the team?
Yes, I am very happy to be at SEG Racing Academy.
I am very grateful because last year I almost did not race, but from the beginning of my recovery process the team assured that I could stay one more year, so that helped a lot in coming back stronger.
I think that patience and confidence is exactly what you need in order to recover and have a successful comeback from an injury.

PEZ: You won the Olympia’s Tour in 2016, that’s a huge result in The Netherlands, did you get any pro offers as a result?
It was already October when Olympia’s Tour finished. I heard some rumours of teams that could be interested, but I did not have contact with any of them. 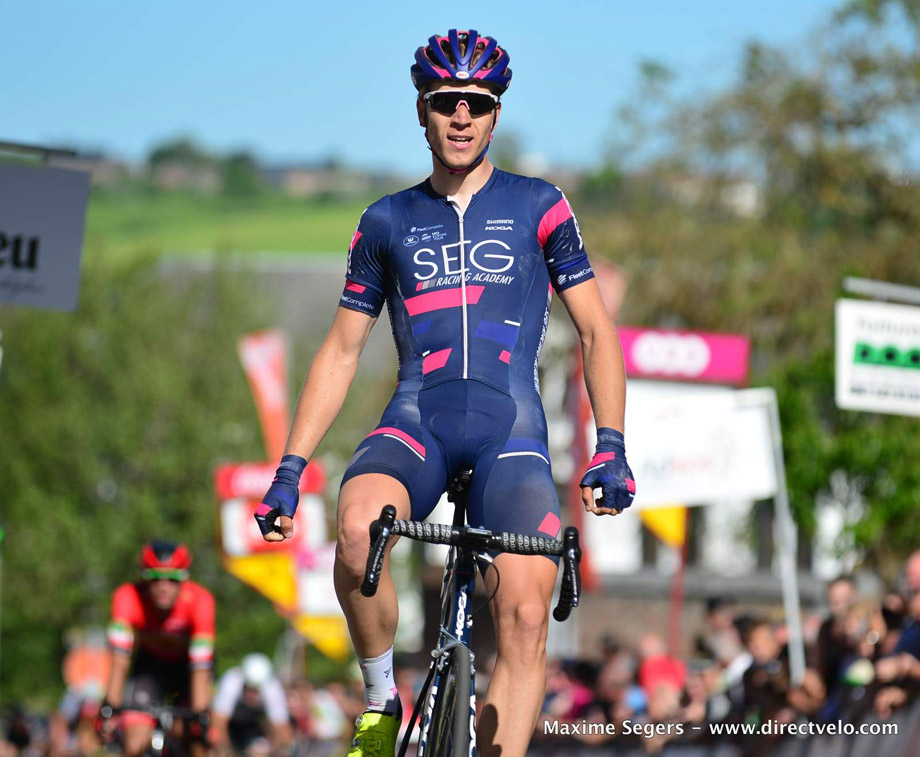 PEZ: But 2017 was quiet – why was that?
Two days before my first race I did one last good training session. I was relaxing on the couch with some Netflix on TV waiting for my father who would return from the supermarket any minute with some good food. I stood up to go to the toilet and fainted on my way there, crashed my head on the floor, concussion. The first two weeks after things seemed to go better but then I had a setback. And from that point it didn’t get any better for two months. Then things got slightly better in small steps; I went out for two hour rides again easy. I basically gave up racing in 2017 and agreed to only ride when I felt like it, with the only goal of the ride being to have fun. This resulted in weeks of just under 20 hours on the bike which got me back to racing in August/September time. I did some good races and even won a crit. So that was really good for the confidence and I felt that if I did a good winter I could do a really good season 2018.

PEZ: Tell us about your winter preparation.
This Winter I did two things different from other years. Number one being the track Nationals in December, I did them before, but never with a full preparation. So I was doing quite hard short sessions on the track twice a week which is not the usual winter build up for me. The Nationals went well and I think I can say so far it has been really helpful in the physically, technically and tactically sense. Second, after the Nationals I took some rest before going to Greece for the first team camp. Vasilis Anastopoulos (Performance Manager) arranged a perfect setting for us there to train well. After the first camp we (Julius Van Den Berg, Peter Linderink and Edo Affini – with Jan Maas, and Stevie Williams in another apartment) stayed in an apartment of Panos Theocharis, one of the team mechanics, and did some more good training. Some of us went home for a week for some rest, left the bike in Greece, then when we came back we started with more hard sessions, sprint training, hill reps etc. But we made sure we were well rested again for the second team camp. There we did some more good training, and then a block of races to get the final touch. 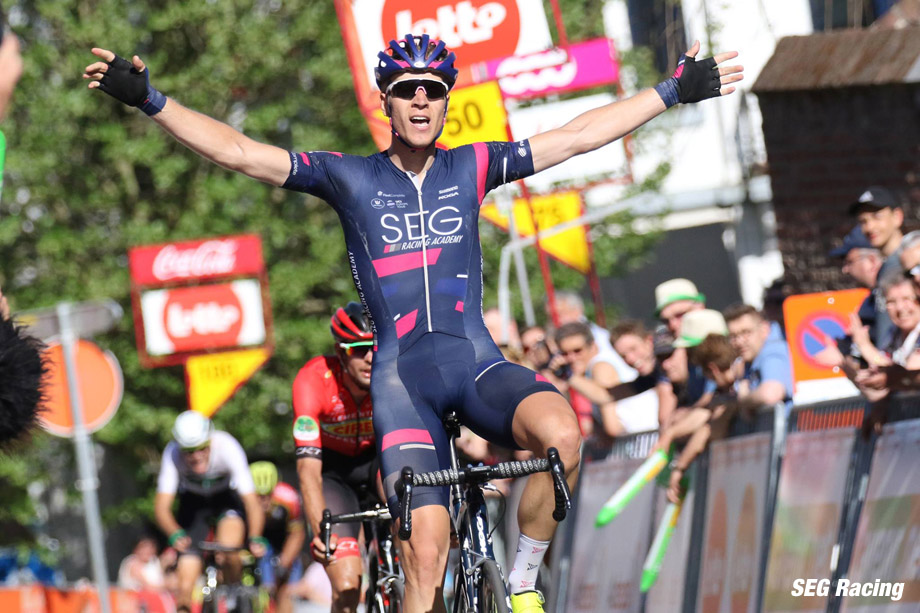 PEZ: What’s your favourite kind of race day?
Narrow twisty roads, short or rolling hills, cobbles, wind, rain, aggressive racing. Any day which has at least three of those things above seems like a good race day for our squad.

PEZ: How does your programme look now?
It looks like this:

PEZ: Do you have national selections coming up?
I’d really like to race for my country but I have to be realistic and since I am not U23 anymore it is going to be really hard. But my program in the coming weeks has some 1.1 races as well as the Elite Nationals, so I hope to do well there and maybe it is worth a selection. 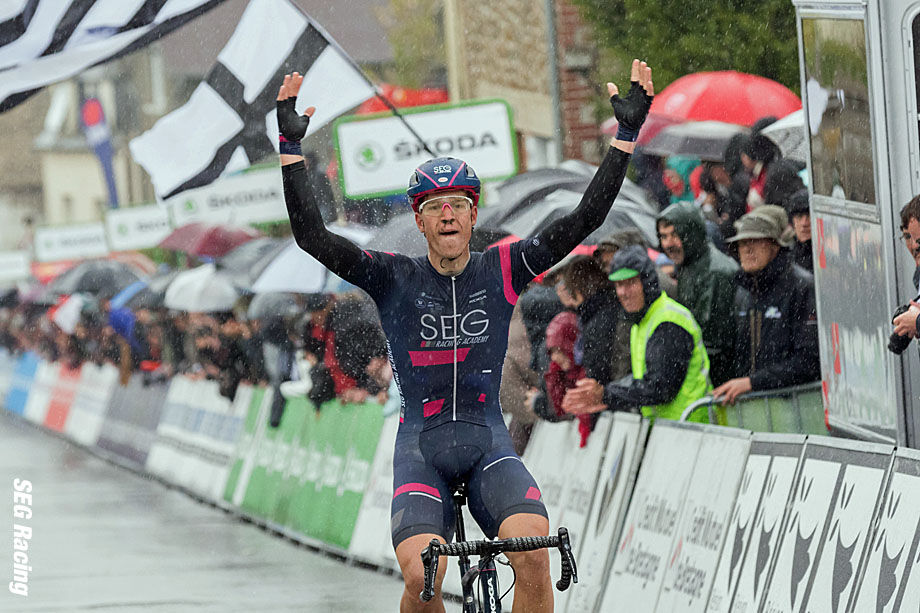 PEZ: Where is the toughest u23 racing – which country?
Probably Italy, I’ve never been there but if you look at the results and the program for pure u23 races the level is quite high. I would say that the .2 level is the highest in the French (Tour de Normandie, Tour de Bretagne ) races and obviously lots of that has to do with ambitious u23 riders racing them.

PEZ: And if you turn pro and could win just one race, it would be?
Paris-Roubaix. 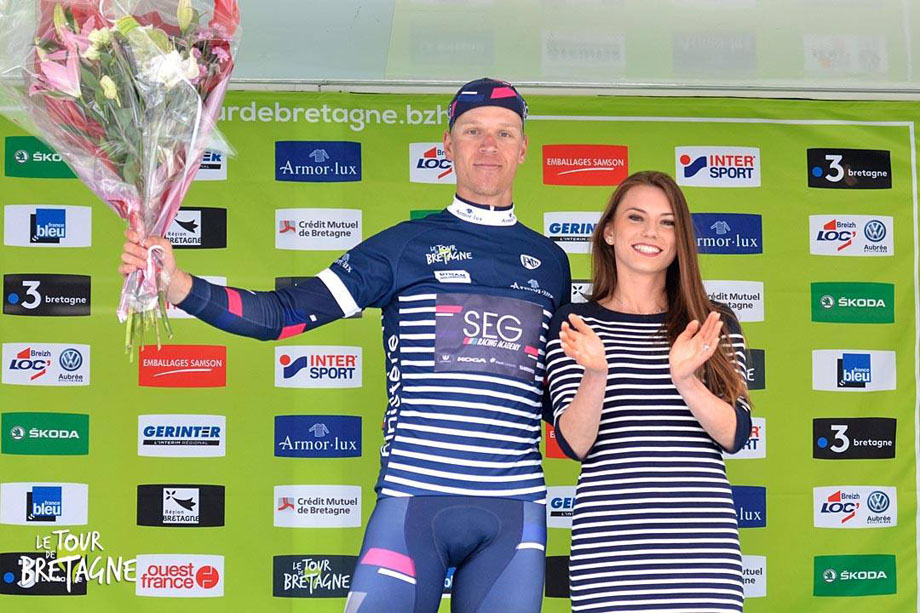 # With thanks to Cees and SEG Racing Academy’s Communications Executive, David Soteras – and remember where you heard the name first. #