My buddy, John Hardie is a 65 time Scottish grass track champion; his hero ‘back in the day’ was Danny Clark. When he heard that ‘Six Day King’ Danny Clark and me were breakfasting together at Copenhagen, it wasn’t long before the email arrived with the questions he wanted me to ask the great man.

PEZ: Danny, you won a silver medal at the Commonwealth Games in 1970 – that’s 40 years ago!
Danny: I’m 58 and started racing when I was 13; I won silver in the 4000 metres Commonwealth pursuit at Edinburgh in ’70 and then silver in the kilometre at the Olympics in Munich in ’72. I turned pro in ’73 and I’m still racing. 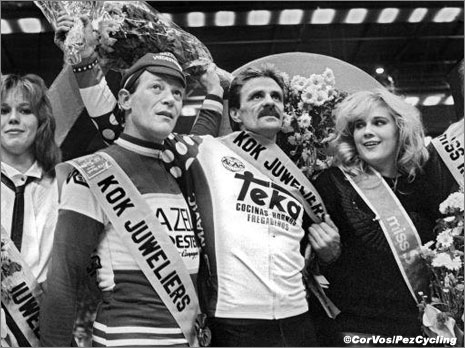 PEZ: Your favourite six?
Danny: I really like Copenhagen, it was the first place I raced on my first trip to Europe; I won the six here eight times. It’s special for me – Copenhagen and Gent, of course.

Gent was my home and I loved the reception I used to get from the crowd there. A thing that a lot of people don’t understand, is that if you’re an Aussie cyclist, you rarely get the opportunity to perform in front of your home crowd – but Gent became like family to me

PEZ: Tell us the technical spec. on the bikes you rode.
Danny: I always rode 52 x 16 on 165 cranks; top tube was 56, seat 54; equipment wise, I had no preference – I rode what I was given! My frames were steel, made by Banani, here in Copenhagen – they were the best track frames of their time.

PEZ: Good old steel or king carbon, if you had the choice?
Danny: The bikes today are superior, I wish that I’d had the opportunity to race on carbon frames in my best years – they’re so aero and strong. I remember my bike shaking in the bankings, when I was going for a lap record – sometimes I’d have to ease off. 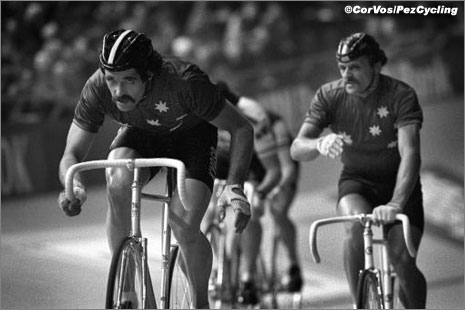 PEZ: Toe clips or clipless?
Danny: I still like clips and straps, best. Sean Kelly was the last to go clipless on the road and I was the last on the track. But I still don’t like them, I can never seem to get the cleat where I want – something I never had any problems with on clips and straps.

PEZ: Best partner?
Danny: Rene Pijnen, from a pure cycling perspective: second best partner but best for enjoyment was Tony Doyle. We had the exact same mentality and it was fun to race with Tony.

PEZ: Clark & Allan (Australia) was the team many remember from those days.
Danny: Don Allan and I won 16 sixes together, I think – it was funny, with me he was very good but he never seemed to perform with anyone else. He wasn’t a sprinter but he was a good tempo rider. We were young, enthusiastic and all the big teams rode against us. I’ve seen him twice in the last 15 years, he has a bed and breakfast in the mountains near Melbourne. 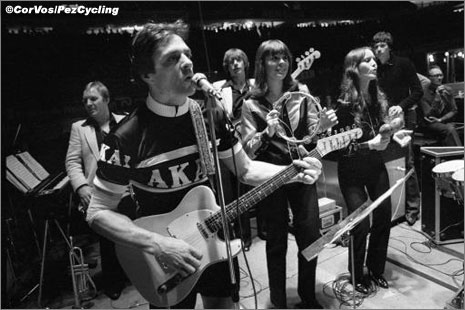 PEZ: Best ever six rider.
Danny: Sercu was the top man, but for me the guy that was responsible for the six days having ten golden years was Didi Thurau. He won stages and held the yellow jersey for a big part of the Tour – the public wanted to see him. He was fun, looked good and was easy to race with. For me, there’s no doubt that he lifted the sport. 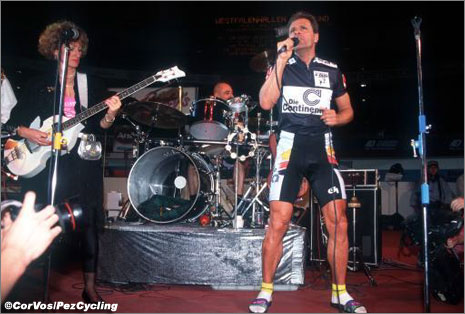 PEZ: The current crop?
Danny: The Danish boys (Alex Rasmussen and Michael Morkov) are very good – but where’s the depth for the future?

PEZ: Compare ‘your’ day to now, please.
Danny: This isn’t just me speaking; the sixes are in trouble. Everyone has different opinions, but I think the main thing is that the riders have to perform properly, put on a show.

The fact that the big road stars don’t ride the sixes is a factor, too; but they all get paid so much money, nowadays. In my time there were maybe 15 great track riders – but it was the road stars they wanted to see.

I think too that they should have one rider circling the track all the time, just for the spectacle.

The economy is down just now – folks haven’t got 38 euros for the cheapest ticket at Berlin.

And track design hasn’t helped, on a big 250 metre track like this (Ballerup) it’s hard to fill the centre and get that intimate atmosphere that you need – the place has to look packed, even if it’s not. But that’s down to the UCI wanting tracks that are suitable for World Cups and major championships.

Finally, the drugs scandals in Germany leading on from the Puerto business, in Spain – that was bad. 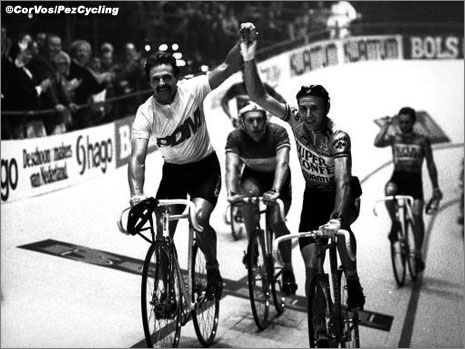 PEZ: How come Gent remains so healthy?
Danny: It’s a tradition there, an intelligent crowd with a passion for the sport. For a lot of folks the six is the high light of their social calendar – it’s a big deal.

PEZ: I believe you clocked a 42 mph lap at Gent?
Danny: I don’t what the speed was in miles per hour – 60 plus kph, though. At one time I had the lap record for every track on the winter circuit – I could have gone faster, but I wouldn’t pay for the best, new equipment. Guys would be on Campag Shamal wheels and I was still on my old wheels.

PEZ: You crashed in Frankfurt in 1983 and had to get a plate in your leg – does it still trouble you?
Danny: All the time; I’ve had big problems with it, since then. If there’s a change in the weather, I get a lot of pain. I reckon my left leg is 20% weaker than my right, so my right leg has to work that much harder. 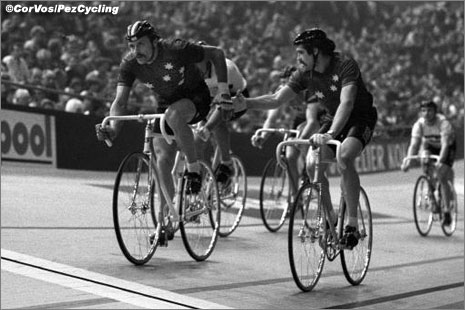 PEZ: We believe you won the 1989 Australian one mile penny farthing (Old Ordinary) championship?
Danny: It wasn’t one mile, it was five times round the town of Evandale, with left and right turns. It was very exciting, but very scary, you’re sitting way up high with the bars across your lap, there’s no gears. I was there as a guest but they let me ride the Aussie champs – it was the world champs next day, but after they saw me in the Aussie champs, they wouldn’t let me ride. My tactic was to get to the front and go as hard as I could in the cross wind, but keep it in the gutter so they couldn’t get any shelter off me – I could hear them huffing and puffing behind. But some of those guys are incredible in a straight line sprint, very fast pedallers, so quick on those things.

PEZ: You look very fit – you must still train?
Danny: At least three hours each day, sometimes four. One day I’ll go into the hills; then another day, I’ll stick to the flat; and I go out with five or six guys and we do 20 kilometre team time trial efforts. Sometimes I’ll ride the track in the evening. 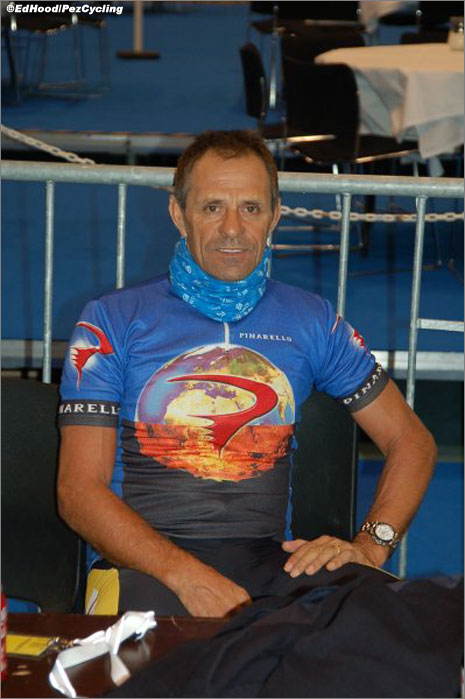 PEZ: What do you do in the summer, when you’re not derny driving?
Danny: I go home to Surfers Paradise in Australia, train in the mornings and spend time on the computer in the afternoon – attending to business. I also song for an hour or two each day, I have the karaoke machine and practice with that.

PEZ: Did you keep all your trophies and jerseys?
Danny: I kept everything; cuttings, programmes, pictures, sashes, the lot – my garage was full of shit. Then, one day, about five years ago, I got a call from a guy called Brett Horton; he asked me if I had any stuff suitable for his cycling museum in San Francisco. I laid it all out in the garden, photographed it and sent the pictures to him. He flew over and bought the lot – so if you want to see it, you’ll need to go to San Francisco!

PEZ: Have you ever raced on grass?
Danny: Just once, the English race, The Tour of the Cotswolds used to finish in a park, on grass. I thought; ‘what the hell is this? but I still won the sprint from the group I was in!’ 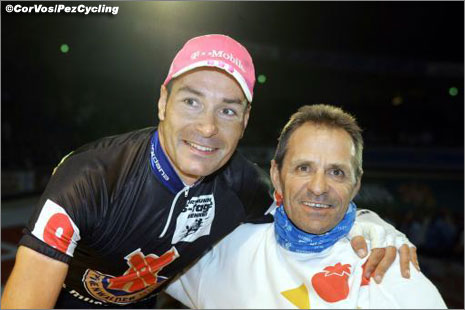 PEZ: Regrets?
Danny: Not doing the road – I wish now I’d done the Classics and the Tour. When I used to ride minor stage races like the Tour of Germany, guys like Hinault and Moser would say; ‘you should ride the Grand Tours, you climb well and would still be there at the finish, when all the other sprinters are gone.’ I spoke to teams, but it never seemed to come to anything. But I was riding 15, 17 sixes every season, on the track 13 hours every day – at that end of February, the last thing you wanted to do was jump on a road bike.

Maybe later in my career, when the six day programmes eased back, it would have been possible.

PEZ: Will there ever be another Danny Clark?
Danny: They said that there’d never be another Jack Nicklaus and then along came Tiger Woods – who knows!

***
I think there’ll never be another Danny Clark – even if they could get the pedals round, they couldn’t sing ‘Proud Mary.’ With thanks to Danny for his time and apologies for the interrupted breakfasts.