Six Day racing isn’t just about podiums, flowers, and wins. It’s really about entertainment and getting folks to part with their hard earned euros and kroner to come and see the show. A team doesn’t necessarily have to be on the zero lap to be a success on the Six Day circuit. One of the hits at Copenhagen was the USA and Garmin pairing of young Daniel Holloway (21) and experienced Colby Pearce (36).

The Danish crowd loved Holloway’s air guitar and solo air mic work on ‘Born in the USA’ and ‘We will rock you,’ each night as he lead the ‘ballustrade’ sprint string – no hands, around the top of the track at 45 kph!

We caught up with the men in the star spangled jerseys during a lull in the racing at Copenhagen, whilst the band hacked another few songs to death – Bobby Hatfield will be turning in his grave if he hears what they’re doing to, ‘You’ve lost that loving feeling.’ 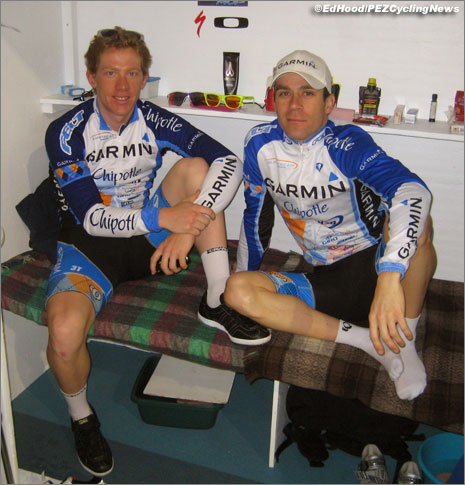 PEZ: How many Sixes, guys?
Colby: This is my fifth; I rode one last year with Ciccone and this my fourth with Daniel, this season. It was good that I had that one under my belt – I was able to pass a lot of stuff on to Daniel.

PEZ: What has it been like trying to gain acceptance?
Daniel: The guys have treated us well; we laid low to start with at Dortmund, until the other teams saw that we were safe to be around and knew how to ride our bikes. Zurich was a bit of a break through for us, we began to get a lot more involved, with me leading the ballustrade sprint, and all. Andy Beikirch has been good, he kinda took us under his wing and told us, ‘watch this, watch that.’ Ciccone and our soigneur, Gary Beckett have been good too, with tips and advice.

The thing about the sixes is that it’s a little universe all of its own!

PEZ: Did you keep up with the election, back home?
Daniel: Yeah, because the folks around us here kept telling us what was happening, it was cool.

PEZ: Are you doing the last two sixes at Cremona and Hasselt?
Colby: No, after this we’re going to Girona to train then we’re back here for the World Cup. We have to ride that to get US qualification for the Worlds; we need to be top five to guarantee a ride in the Worlds Madison in Poland in late March. After the World Cup we have the Vuelta a Mexico as a preparation race for Poland. 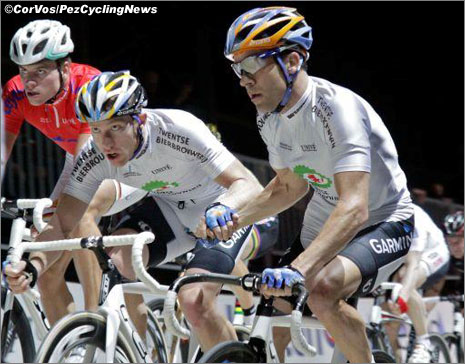 PEZ: How are Garmin about you doing the Sixes?
Daniel: Jonathan Vaughters and my sport director, Chann Macrae have both been great. They know that I’m not the greatest lover of training; so if I’m riding the sixes they know that I’ll be keeping in good shape. I get paid the same whether I race or train, but I’d rather get paid to race!

Colby: I’m the other way around, I end up training too much if I’m not racing. Our goal this winter was to get contracts for the sixes then get integrated into the system and the lifestyle. Now we want to have a good result in the World Cup, so we can get to the Worlds. 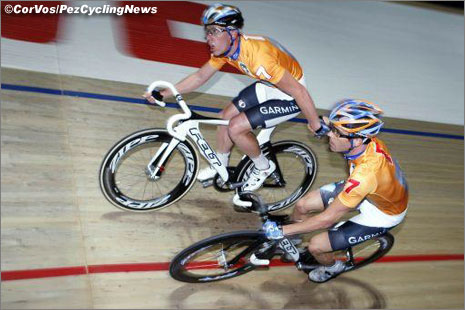 PEZ: Will we see you on the circuit, next year?
Colby: Yeah, we’ve got three or four lined up – Dortmund, Berlin and Zurich; we’re really looking forward to Berlin. We both think the sixes are a good ‘fit’ for the road and enjoy racing all year – my wife isn’t so keen on me doing that, though!

PEZ: And what about the, ‘Born in the USA’ thing?
Daniel: I’m not really a huge fan of the song, it’s OK and I mean I like music and I like to dance. It really started in Zurich – Christian Bach usually leads the ‘ballustrade’ sprint there; but his wife had a baby and he couldn’t ride, so the promoter asked me to do it. They liked it, so did the other riders and I’m doing it here too. The crowd loves and it’s helped gain us acceptance. 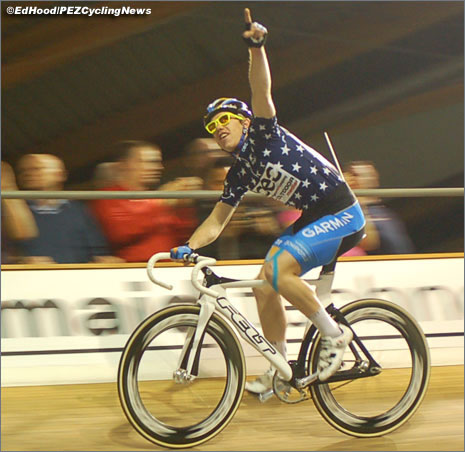 PEZ: How’s the US track scene?
Colby: There are around 25 tracks in the US, but only two are indoor. California is the centre of US track racing, there are four there. Each track has a few good riders who compete there regularly; but what’s needed is a central, indoor facility where these guys can all compete against each; that would bring the standard up. We’ve just had a new indoor track built, where I live, in Boulder Colorado – it’s only 145 metres, but it’s a great facility for me. I’ve actually ridden a six in North America; on the little indoor track at Burnaby, Vancouver.

PEZ: You seem to be on the laptop a lot, Daniel?
Daniel: Yeah, I stay in touch with family, friends, fans and I do the video Skype, facebook and twitter things. I’m trying to get folks back home more informed about the six day scene.

Colby: Facebook? No, I spend too much time on the computer already, that would just be too much!

PEZ: Sum up the sixes for me, guys.
Colby: I enjoy them, but it’s hard work; different from the road, a different kind of fatigue, with the people and the noise and the jet lag from racing into the early hours.

I had to get back to my riders; and Daniel had to choose his shades for the night – and get some rehearsal time in on that air Stratocaster.