So You Wanna Start A Continental Team

After thirteen years a continental pro, Harry Lodge ‘drifted’ into team management, via the short-lived Endura squad. Now, he runs the continental squad, KFS Special Vehicles. PEZ asked him how you go about being a ‘player.’

PEZ: Despite your European experience, your squad is UK-based, Harry.
Harry: Yes, KFS Special Vehicles of Andover, England. The managing director is a cycling enthusiast and one of his ambitions is to develop young British talent for the 2012 Olympics; he’s fully aware of the importance of riders having to race in Europe to develop, though.

PEZ: The squad is registered as, ‘continental?’
Harry: To enable the squad to enter stage races on the continent, you have to register with the UCI as a ‘continental’ team. You have to have a minimum of eight riders and all the correct insurances in place, but apart from that, it’s not too onerous – there’s no bank guarantee to worry about, for example. 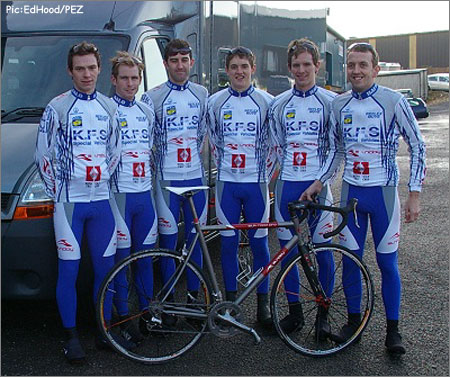 PEZ: How do you go about getting a main sponsor?
Harry: You have to explore; if you put out one thousand presentation packs to potential sponsors, you can expect maybe five replies, then you work hard at them. The other route you can take, is to go to a sponsorship agency who will try to match you to a client that they have on the books, who is looking to get into sports sponsorship. Obviously, that costs money, they will expect a commission for arranging the deal.

PEZ: Have the Tyler, Floyd, Basso etc. etc. affairs, caused problems?
Harry: Oh yes! A couple of the team’s sponsors have bailed-out, scared-off by ‘doping scandals.’ It’s not the first time, it won’t be the last. However, the sport is very much trying to ‘clean-up it’s act’ – I found it very refreshing that Rabobank hauled Rasmussen out whilst he was in yellow.

PEZ: What sort of budget do you need to run a continental team?
Harry: For an operation like KFS, it’s into six figures, sterling. If you go UCI pro-contintental then your into high six figures and ProTour is in the millions.

PEZ: I believe that getting ‘stuff’ isn’t too difficult, but hard cash is different?
Harry: Yes, cash is the difficult one, if you think about it, there are three reasons why people will get involved with sponsoring a cycling team; there’s the ego or passion aspect; the fact that it’s tax deductable and then there’s ‘media return’ – that’s what the ProTour sponsors are interested in, TV and press, that’s where the real money lies. 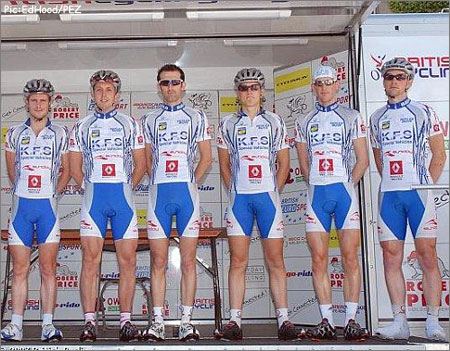 PEZ: How about bikes?
Harry: One of our riders, Greg Roach markets a range of bilkes under the ‘Sunday’ name, so that’s what we ride.

PEZ: Clothing?
Harry: I market sports clothing under the ‘Jollywear.com’ logo, we’ll probably be going with that in 2008.

PEZ: Cars?
Harry: At our level, we have to pay for those, but we get a little bit of a discount on our Renaults.

PEZ: And riders?
Harry: I have a lot of ‘grapevine’ contacts; I look at results; we get a lot of CV’s coming-in and British Cycling (the sport’s governing body) are very helpful.

PEZ: What about mechanics, masseurs?
Harry: I use people that I’ve known for a long time, I pull them in as required, for specific races, we’re not big enough to retain full-time staff.

PEZ: What about the programme?
Harry: First of all, you have to go where the sponsor wants you to go. We have a UK sponsor, so they want us to ride the Premier Calendars (season-long competition for elite riders) and also the major criteriums in Britain. We try to frame it so as it’s not too heavy, but not too light either. We’re aiming to do one stage race per month on the continent to give our young riders experience.

PEZ: What about the Tours of Britain and Ireland?
Harry: At the moment, we don’t know, obviously it would be great to get into these races, but it’s down to results. You have to be getting the results to merit selection, and to tell you the truth, unlesss we were riding at a level where I thought we could be competitive, I wouldn’t want us in races at that level.

PEZ: How do you keep the sponsors happy?
Harry: You have to keep them well-informed about the team’s progress, send them newsletters, posters, pictures and, if they have a stand at a trade fair for example, send rides along to give support.

PEZ: What defines success, for you?
Harry: Every rider giving their best, putting the sponsor’s name forward. Winning is the icing on the cake, because like they say; “nobody remembers who came second!”