In the first part of this very cool interview, Steffen Wesemann gave us a cobbles-eye view of his huge Tour of Flanders win. Now that we’ve recovered from 270kms of crashes and muurs, we get the goods on Paris-Roubaix and what Museuuw said as they chased, riding all the Grand Tours, and his relationship with the T-Mobile team…

If you missed Part 1 of this interview – I highly recommend you go read it – and you’ll get a sense of what a cool guy Steffen Wesemann really is. Our scheduled 20 minutes quickly became 45, and I’d have been happy to discuss racing with him for much longer, but I started to feel guilty hogging his time… 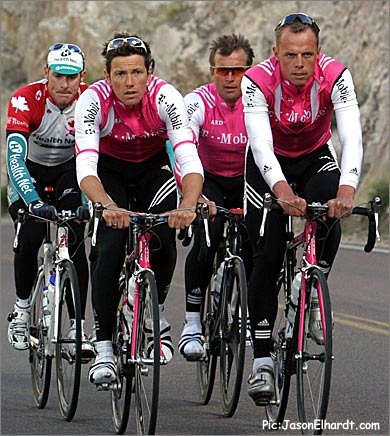 ROUBAIX DREAMS?
PEZ: The Tour of Flanders was an amazing win and confirmed you as a man for the Classics. You took second in Paris-Roubaix in 2002, and always seem to be right there in the Spring Classics, is there something about those Spring races that really gets you motivated?

Steffen: You have to figure out what’s your point in the peloton, what’s your favorite in the year, so I’m really sure I couldn’t win the Tour…maybe be in the first 5 or 10, but I know I can win a couple of these [Spring races] – specially Roubaix and Flanders, maybe some other Classics – but those are the famous ones, and if you are one of the ten guys in the world who can win these, then I think you have to work on that.

It’s hard, every 5 years it’s possible to win one, but it worked out for me.

PEZ: It seems like you’ve been stronger and stronger for the Spring Classics, and it seems like the guys who are a bit older – in their early 30’s – are the strongest guys in those races – maybe in 2005 it’s Roubaix for you… what do you think?

Steffen: Yeah well, this year I felt strong enough to win Paris-Roubaix, and I WANT to win it… but here are so many things around there – you need luck, you need good power, you need a good team – I mean this year I was strong enough and I got a puncture 10km before the finish like Museeuw and van Petegem. And then – it’s us three together and we have just 20 seconds…

If we work together, we catch the group easy, but Museeuw didn’t want to work with us, he said “it’s my last race, and if I come into the stadium with both you guys, then maybe I’m 3rd… that I’m not working for.” So it was over for us. 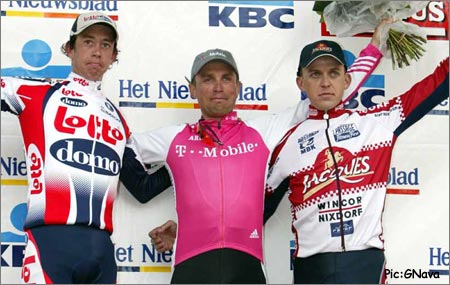 Even beating the Belgians at their home race, Steffen was still a hit with the fans.

PEZ: When you guys were riding, did he actually say that to you?

Steffen: Yes! I mean, I understand this, but for me, for us…. The race was over then. But that’s Roubaix too. And then I crashed in the stadium, but that was really bad [you can hear he’s disgusted with himself – ed.] It was totally stupid for me I’m too focused and make a stupid mistake – going down inside on the track – you NEVER do this! And then I crashed… I was soo unhappy on this day…

And with Classic riders it’s the same as wine – the older is the better! You’ve heard of this I think…?

Steffen: The problem with these races, like Flanders and Roubaix – you need a lot of memories – if you have the memory from last year, from 2 years ago, from 10 years ago – especially if you’re not born in Belgium and do these races as a a junior or something… it takes you 3, 4 5 years to be in, to know all the rules, all the corners, the climbs, the best ways, where’s the wind, what the Belgians are doing – if you’re not Belgian it takes until you are about 32 to really know it.

PEZ: Now that you’ve won Flanders, do you have a preference of which race to win next?

Steffen: It doesn’t matter for me in 2005 – the best is both, but if I have a wish I wanna win Roubaix in my career. But you never know, if I win Flanders again I will be happy too… 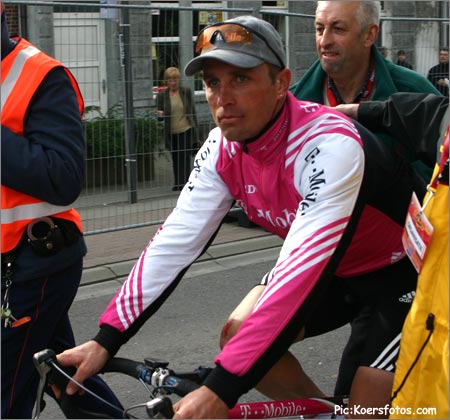 The GRAND TOURS
PEZ: I was checking out the T-Mobile website today and I noticed that you’re ridden all the Grand Tours – the Giro, The Tour 4 or 5 times, the Vuelta – all these Tours. Which one do you like the best – how are they different from each other and from the Classics?

Steffen: Okay – when I went pro, or even when I just started as a cyclist, my father was a cyclist – so it was all around… and we watched the Giro, the Tour, the Vuelta, and it’s a dream to do these Tours. And for me the first option was to do the Giro and I did it but never finished – once I crashed and broke my collarbone, I was too young, no power whatever. Then I said ‘okay, I want to finish a 3 week Tour’ so I went to the Vuelta in 94-95, and I finished it I got the Sprint shirt…

PEZ: How is the Tour compared to the other races for you?

Steffen: Aah the Tour is special – it’s everyday a Classic – it’s so nervous and France has the special roads – you’re not on the really good roads, you have the gravel roads, it’s so hard, everyday is dangerous, and there’s so much money al around. So stressful for all the teams, it’s so important, and if you did a campaign like in the Spring which is very stressfull too, then you have a short break and go into the Tour, then you are totally burned out after the Tour, and for that I said no. It was better for me to do the later Classics.

And the Vuelta – now if I do it it’s just for training.

PEZ: Are you having fun when you’re doing those big races or is it more like a job? 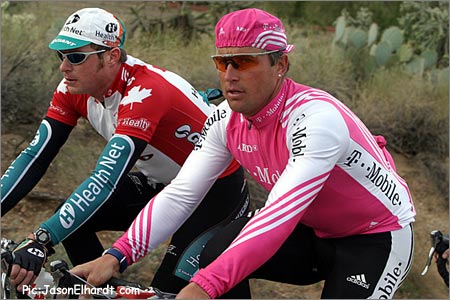 Steffen told us the crew in Tucson has a Saturday morning “shoot-out” to test the legs and spice up the training.

The TELEKOM/ T-MOBILE DAYS
PEZ: You turned pro in 1993 and have been with Telekom (now T-Mobile) ever since. It seems rare that a rider will stay with one team his whole career – why has this been such a good team for you?

Steffen: My first 4-5 year as a pro I was… not so serious about training and everything, so I didn’t have so many options to change. Then. I’m really good in this team – they accept my work – if I help the guys, help someone to win like Olaf Ludwug, Eric Zabel – plus I have a really good relationship with Walter Godefroot. Everything is well organized, the money is right on time – maybe there are 1 or 2 teams in the world that are so well organized .

I had some offers but they were never as good as Telekom’s, and in the last years I think I should give something back to Godefroot since he covered me the first 5-6 years.

GETTING SERIOUS
PEZ: You mentioned that when you were younger you weren’t so serious about your training. Now that you an older more mature rider, are you more serious about it?

Steffen: Yes. In 1998 I met my wife, and at that point I thought to myself ‘either stop, or give it 100%’. I was 28, and I thought I want to take a chance for 1 year – do it again, be serious. I called my old coach and we worked together again and it worked out for us. And now I am totally serious with my training. I have heard form some of the older riders that as you get older, you can train an hour less, but from my pint of view, maybe I am more stupid in a good direction – I always train more and more, and I don’t care about it – 7 hours, 7-1/2 hours it doesn’t matter. And the old riders said ‘nah, we’re not motivated to ride over 5-6 hours’. In my head I’m still fresh…

PEZ: What’s the toughest thing about your job?

Steffen: Hmmm…. Hard to say… Right now, the days are too short. You go out at 8:00AM, train 6-7 hours, you then you have a short nap, and then it’s dark. That’s the hard thing. For 3 weeks it’s okay, but then you think ‘okay it’s enough’. Staying motivated in the winter is some of the hardest part of the job.

If you training you want to see the results, but at this time it’s just base training so you don’t see the results, and you haven’t any check point to say ‘I’m better’ or to test. On the 8th of January, when we go to Majorca, we’ll do a test ad then we’ll know if it worked or not…

I’m a professional and I want to see the results. When I’m racing, we see every week if I’m good or not, good, I can feel it…but now it’s just base training.

PEZ: How about the travel and being away from your family?

Steffen: I never want to be away from home more than 10 days. If I’m in a big Tour, then I take my wife and she brings the kids by car to Belgium, or fly to Spain or France, that’s easy. The travel is part of the job and for me it’s not the toughest part.

Photos of Steffen training in Tucson courtesy of JasonElhardt.com

Travel: Train With Frankie In Georgia