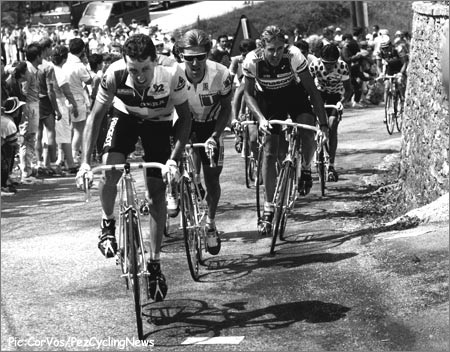 In 1987, Roche won the Giro , the Tour, and the Worlds – the last man to do so . Here he leads Charly Mottet and other era heavyweights at le Tour.

“In France by accident”
Stephen Roche’s parents knew he had talent on the bike, but they also wanted him to learn a trade. He apprenticed as a machinist, while he built his amateur career from his home in Dublin.

Combining amateur cycling with a hard 9-to-5 job is tough. But if you want to know about the school of hard knocks, Roche’s arrival in Paris kicks most people’s experience of the world’s romantic capital into touch.

Stephen Roche: “It was February 11th 1980, and I was supposed to have reached Paris at 11am, but because of fog, my plane didn’t get into Charles De Gaulle airport until 6.30 in the evening.

Of course, there was nobody there to meet me. I got a taxi to the address I had, which was on a one-way street. The taxi driver refused to go up the one-way, so I had to get out at the bottom of the hill and drag my cases all the way up!

I found the place but everything was closed up and in pitch darkness as it was after eight o’clock at night by this point. I hadn’t eaten anything all day, so I hid my bags behind a hedge and went to find a restaurant.

There was one nearby where I had pasta – the first time I’d ever seen pasta! Got back and found my bags, put on some warm clothes and hunkered down on the porch.

About five in the morning a car pulls up, and a voice shouts: ‘Are you Stephen Roche? Come with us’. It was a small Peugeot 104 with two bikes on the rack. I climbed aboard and, sixteen hours later, all cramped up and sick, I got out in the south of France to find a guy called John Parker, one of the English-speaking ACBB-istes at the time, and I was so delighted that he spoke English!!

Basically, I ended up in France by accident. A French coach (Lucien Bailly) had come over to Ireland where the guys that were hopefuls for the Moscow Olympics team used to get weekend coaching sessions. He pointed me out to our coach and said: ‘This guy looks useful, like he’s got some talent, but he’s 19, 20 years old. He should be racing in France if he wants to prepare for the Olympics properly.’”

There were injuries leading up to the Olympics – thanks to a bad shoe plate – but Stephen said he reckoned that a good ride at the Moscow Games would snag that vital pro contract that would mean he wouldn’t be on the plane back to Dublin. 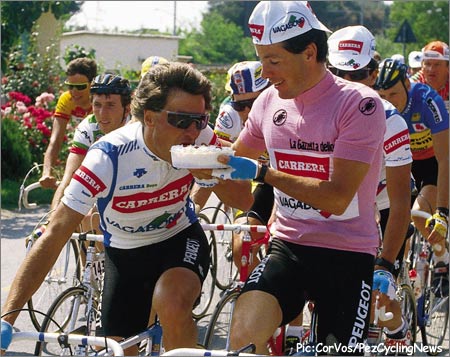 After an in-team battle that makes the Osbornes look like the Brady Bunch, Roche emerged on top at the ’87 Giro.

Stephen Roche: “I put a lot of pressure on myself with my results, and I went to Moscow, but had a total flop on the day, and came back with my tail between my legs. So I was thinking to myself, ‘OK, do I go back and try to get a job in Dublin, or do I give it a go to the end of the season?’

Basically, I and some of the other (ACBB) guys headed down to Biarritz, in the Basque Region, for the month of August, then rode some criteriums, as I thought it would be a good way to make some money.

I was basically training and trying to get over the Olympics disaster, but we formed a bit of a ‘Mafia’ when we were down there! Between us, we won more or less everything – I won a couple of really, really good ones and made quite a bit of money. Then down there, I got a contract in the post from Peugeot asking me to join them as a pro in 1981.

So I went back up to Paris and rode all the end of season Classics. Between the end of the Olympics (end of July) and the end of the season (October), I won 19 major events. Basically, I won nearly everything I rode, and that set me up for joining Peugeot.”

Pez:That amateur Paris-Roubaix … didn’t your manager drive alongside telling you that you were going home if you didn’t win?

Stephen Roche: Yeah ……. yeah …. In fact, the windscreen of the car was broken and he’d kicked it out. He was just driving along, bundled up in his overcoat, going overboard and shouting the odds: “If you don’t win this, you’re going home!”

I was away with a young Belgian guy called Dirk Demol, who eventually went on to win the pro version a few years later (1988 – ed) and the Belgian fans all around going crazy wanting the local guy to win. I beat him tactically more than anything else, by surprising him on the track. 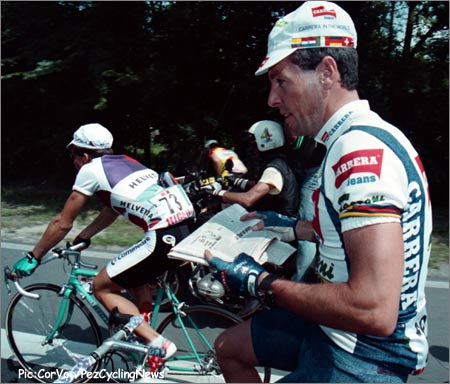 With the unproductive years of team turmoil behind him, Roche capped his career with some good years in the Carrera blues, supporting Claudio Chiappucci and taking some wins for himself.

Paris-Nice and Peugeot
Pez: A few months later you were burning up the pro ranks at Paris-Nice …

Stephen Roche: Well, I’d actually gone to the Tour of Corsica and won that first, which put a bit of pressure on. I went to Paris-Nice and got the (leader’s white) jersey, and all of a sudden, people were saying: ‘OK, you have to win now. You’ve got to defend the Peugeot colours’, because the next Peugeot guy was something like 10 minutes down overall.

I had to defend, but I got very sick on the stage going over Mont Ventoux. I was very inexperienced and I’d taken off all my warm gear – I was too hot on the way up – but I didn’t think of putting them back on because the team car was so far behind when I reached the top. I froze going back down the hill, and got into real trouble, losing the jersey.

Luckily, there were a couple of easier stages for me to recover on, heading down to Cannes. I had a couple of good days there and got the jersey back, and eventually won the event.

Pez: It’s a great way to start a career, but when you moved on, there were problems between you and Peugeot, weren’t there?

Stephen Roche: No. There were no problems with the team. I got on brilliantly with the Peugeot people, the riders, staff … the difficulties started in 1983.

I’d had a great ’81, a bad ’82 and was having a good ’83 (5 wins, including Tour of Romandie – ed) and we were discussing a new contract. Peugeot wanted me to re-sign, but I didn’t want to sign anything until after the World Championships.

They got a bit uptight and the upshot was that I agreed to sign but when the contract came the final page was missing. We’d agreed to renegotiate if I had a good Worlds – and I got a bronze medal.

I said: ‘What are you going to offer me?’, and they were always saying they’d discuss things the next week. Week after week came and went, no discussions.

I went to Paris to meet them and they never turned up. Eventually, they said: ‘You can’t capitalise on third at the Worlds …. your contract stays as it was last year.’

I was a bit surprised as nearly every other team on the continent was offering me more money, so I said they had to follow up or I’d leave. Then they told me the contract was signed and legally binding! And I’d never signed the final page agreement.” 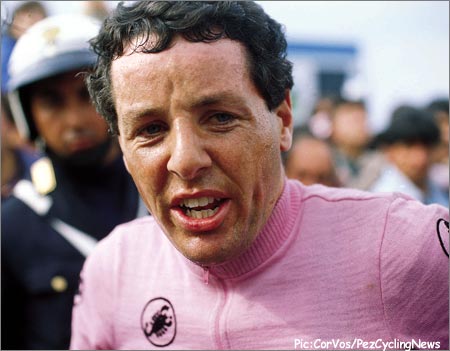 True Colors: Stephen’s skin tone almost matches the jersey after a ‘grande’ effort at the Giro.

The problems were all with the Peugeot parent company. Roche left for 2 good years at La Redoute, but the legal battles rumbled on longer than that. A compromise was eventually reached with Peugeot getting their name on his shorts when he rode so brilliantly for Carerra.

Stephen Roche: The guy that was involved in those problems was sacked the year after I left. Peugeot had the top team on the continent at the time – myself, Phil Anderson, Duclos-Lassalle, Robert Millar – all the top guys, and we were leaving one by one. Peugeot cottoned on that something wasn’t right.

Stay tuned for more from Stephen Roche, including: wheeling-and-dealing in the peloton, musical memories and Roche’s secret summer pastime!

Keep it on Pez!

• Today Stephen can be found leading rides at his cycling camps in Mallorca – for more info see: StephenRoche.com.