Ex-Rider Interview: Skier turned cyclist, Marianne Berglund, became World road race champion and won a hundred plus races in the 80s and 90s. The Swedish star now lives in the US and is a management consultant, Ed Hood found out more. 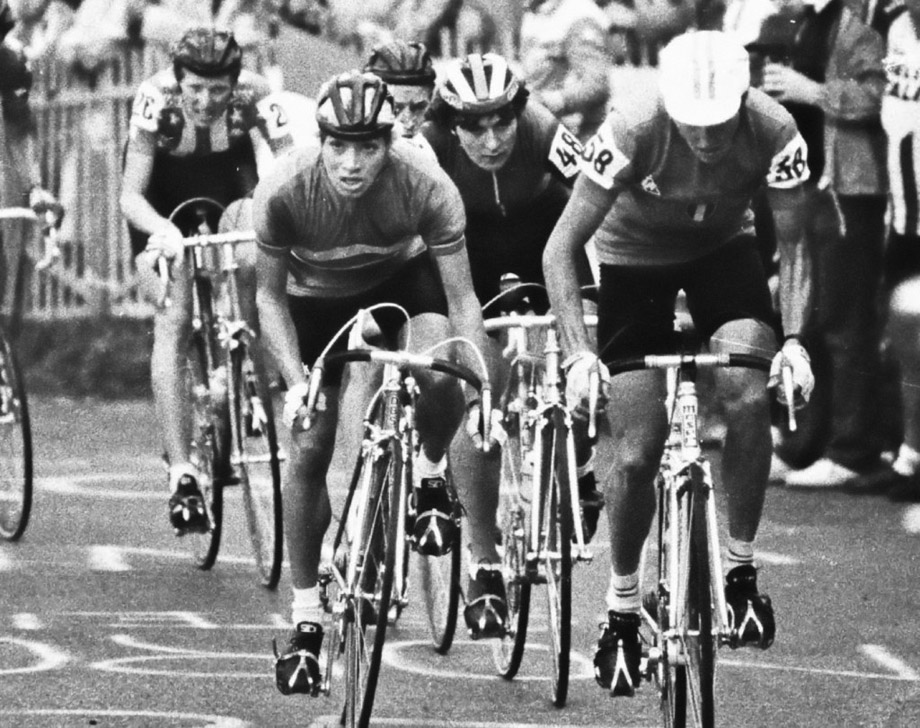 On the way to a rainbow jersey

She only started cycling to connect with a cute guy – that never happened – but she did go on to win a World road race championship and more than 100 races. Swedish-born but now a resident of the USA, Ms. Marianne Berglund took time recently to speak to us. 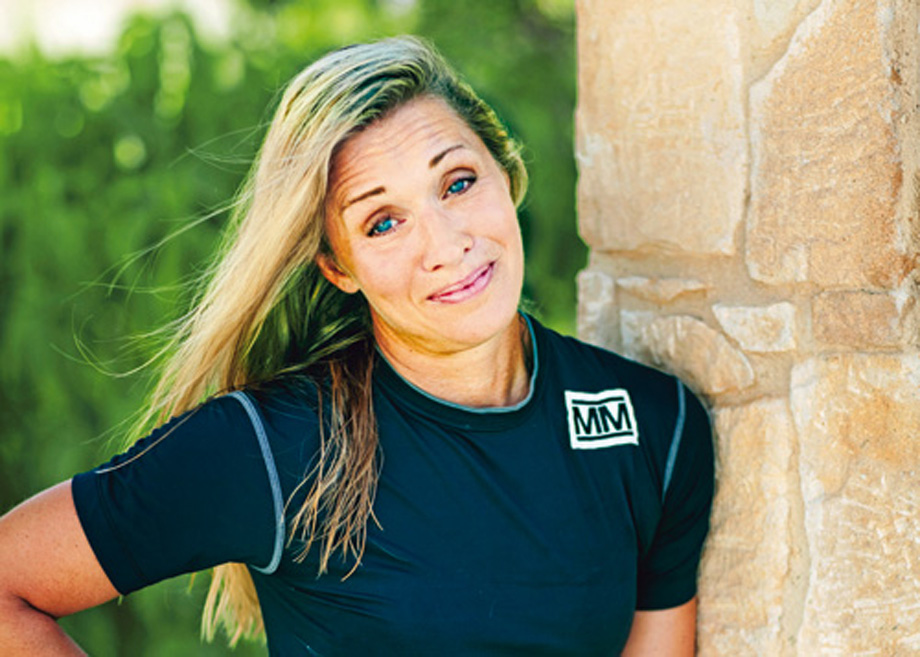 PEZ: You were a skier Marianne, how did you get into cycling?
Marianne Berglund: Yes, I was a skier in my teenage years, up there at the Arctic Circle. I had a crush on this guy who played ice hockey, the hockey players used to train on the bike in the summer, I took up cycling so I could see more of him – but actually nothing came of it. . . 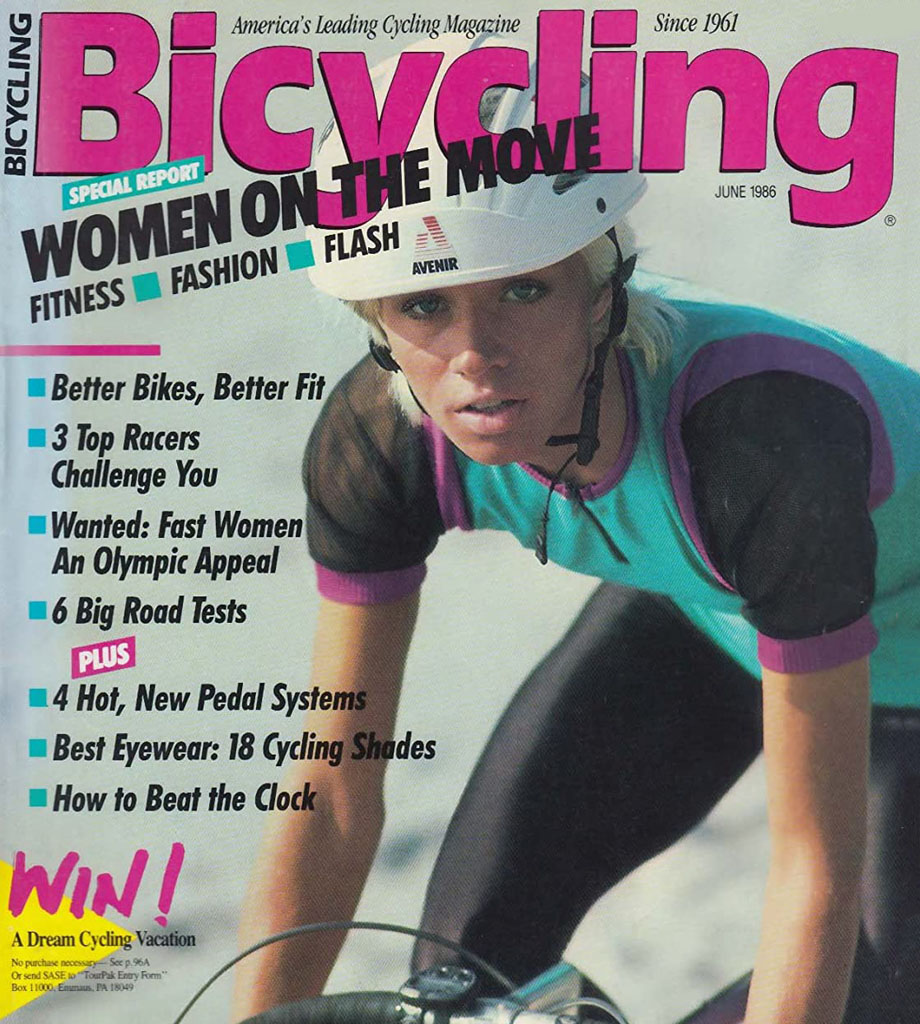 PEZ: How did you get into racing?
I was the only girl in the club, but I had a good coach who could see something in me that I didn’t know was there, he paid attention to me, encouraged me and believed in me. 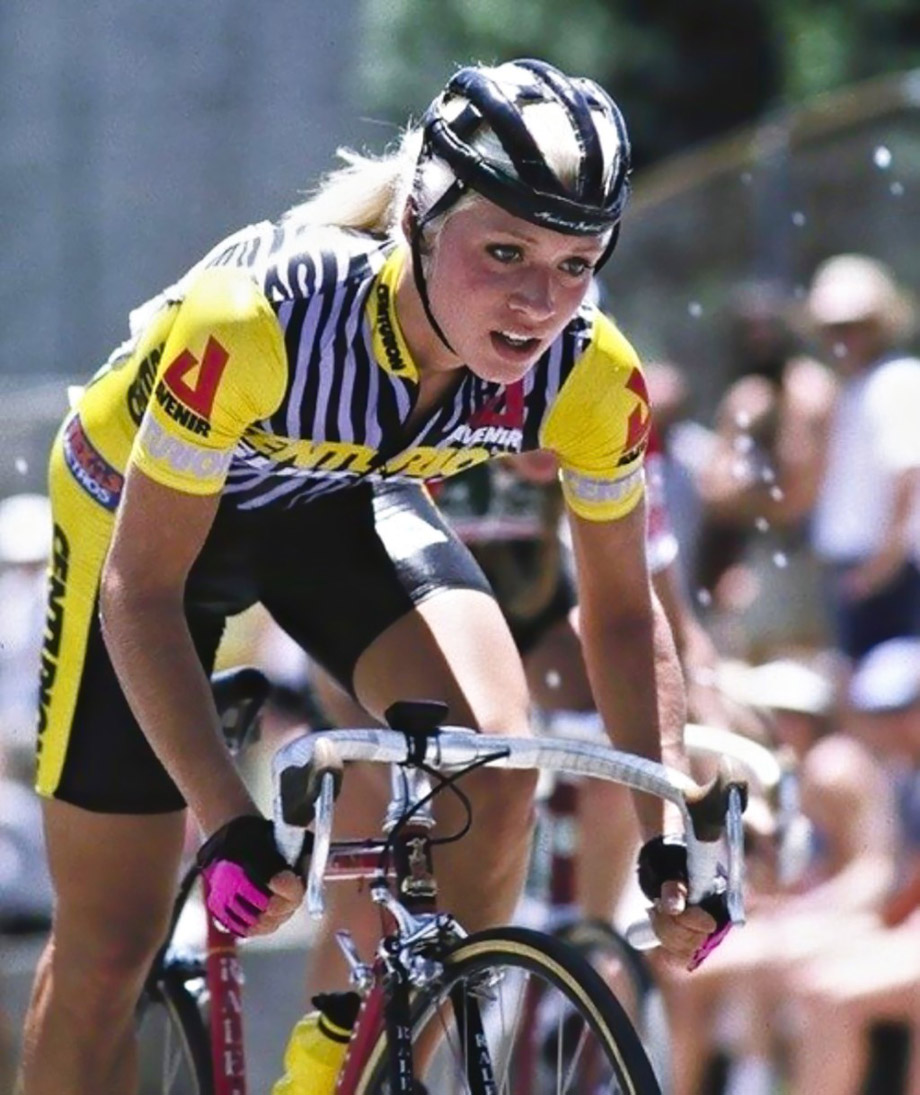 Racing in the US

PEZ: Why the USA and not Europe for your career?
I’d heard about the Coors Classic and Tour of Texas which were premier quality races for ladies, there was nothing like them in Europe. I wrote to Connie Carpenter, asked if I could join her team and was invited over. I met Greg Demgen who was a pro with the 7-eleven team and then Levis – we became an ‘item’ for years. 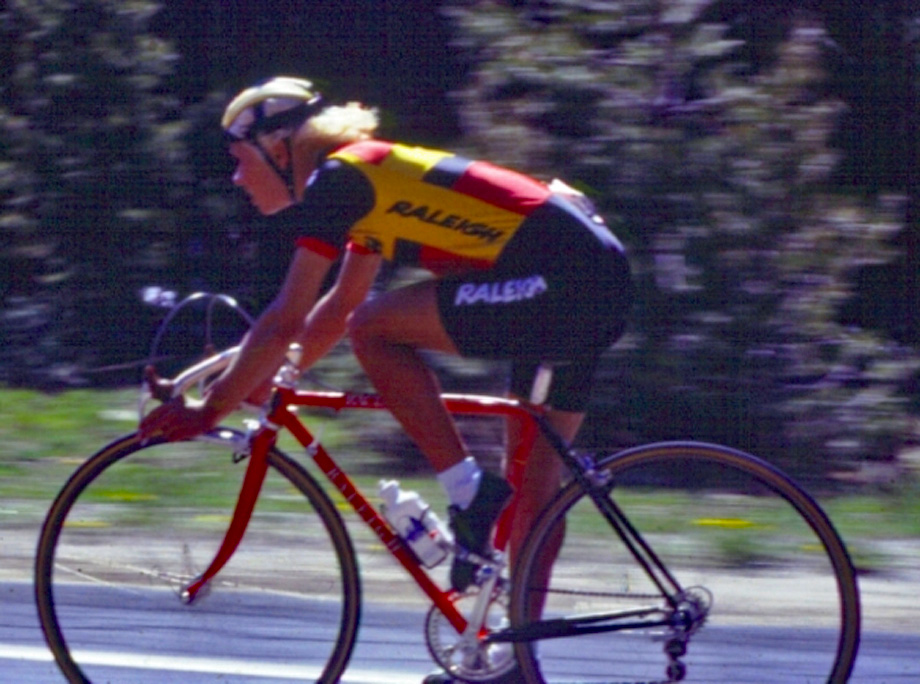 PEZ: Why chose San Diego for your base?
North San Diego was phenomenal for training, the climate was great; you could train on the flat lands on the coast or go inland into the mountains. It was a lovely place and there were lots of guys to train with, not just cyclists, there were a lot of triathletes too, people like Mark Allen, the six time Ironman winner. 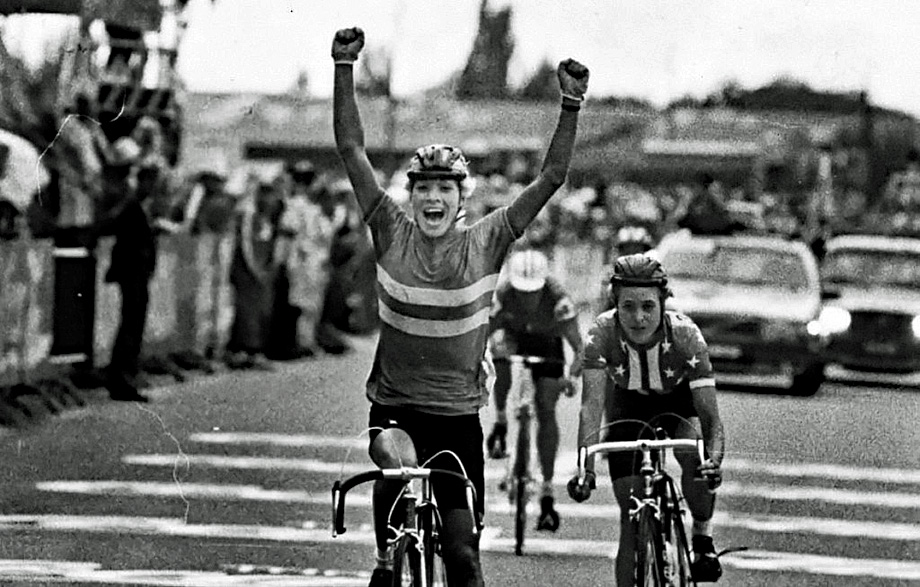 PEZ: You were top 15 four times in the race before you won the ladies’ Worlds.
I always aspired to win, to be the best, I was committed to getting there – goal orientation has always been part of my life. It was what got me out on the bike when the weather was bad, I always had to dangle a carrot for myself – the fact that I had great coaches and training partners helped too, obviously. 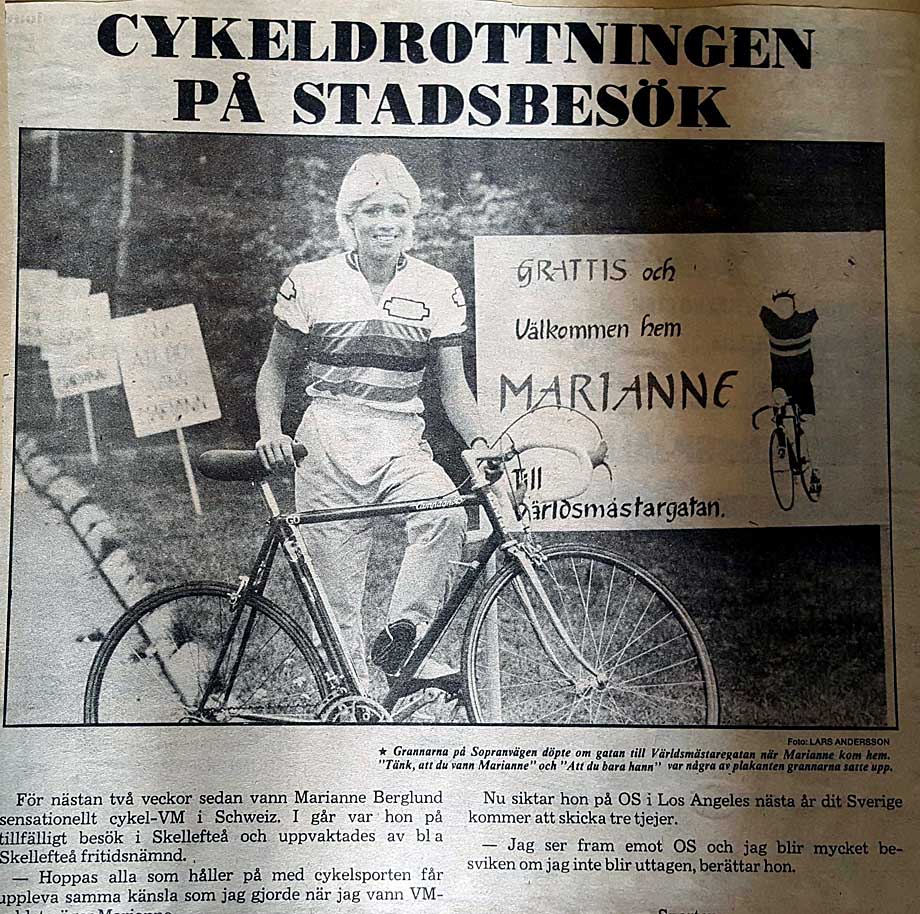 PEZ: You were World Champion at just 20 years-of-age in 1983, your recollections of that day?
The Worlds were in Altenrhein, Switzerland and my accommodation was in the cloisters of a convent which was quiet and beautiful but close to the parcours. We were there for two weeks before the race, I rode the course in training and liked it. The accommodation was perfect, the calm and lack of external noise meant I could be really focused on the race. On my warm up ride on the race morning my legs felt light and I was very calm. I made sure I was at the front on the first climb to be clear of the scuffle for position, I didn’t want to be stressed, if you get stressed your heart rate goes up and your focus slides. I was following Maria Canins the Italian rider, she attacked with maybe two kilometres to go but I chased her and it was going to come down to a small group sprint with Canins, Mandy Jones, the English girl who was defending champion and the US girl, Rebecca Twigg who I knew would be most challenging in a sprint. I remember that at 500 metres to go I had acute awareness of the fact I couldn’t see Twigg but she passed me with 400 metres to go and latched on to her. She looked right to see where I was and I went left – she took silver with Canins third and Jones fourth. 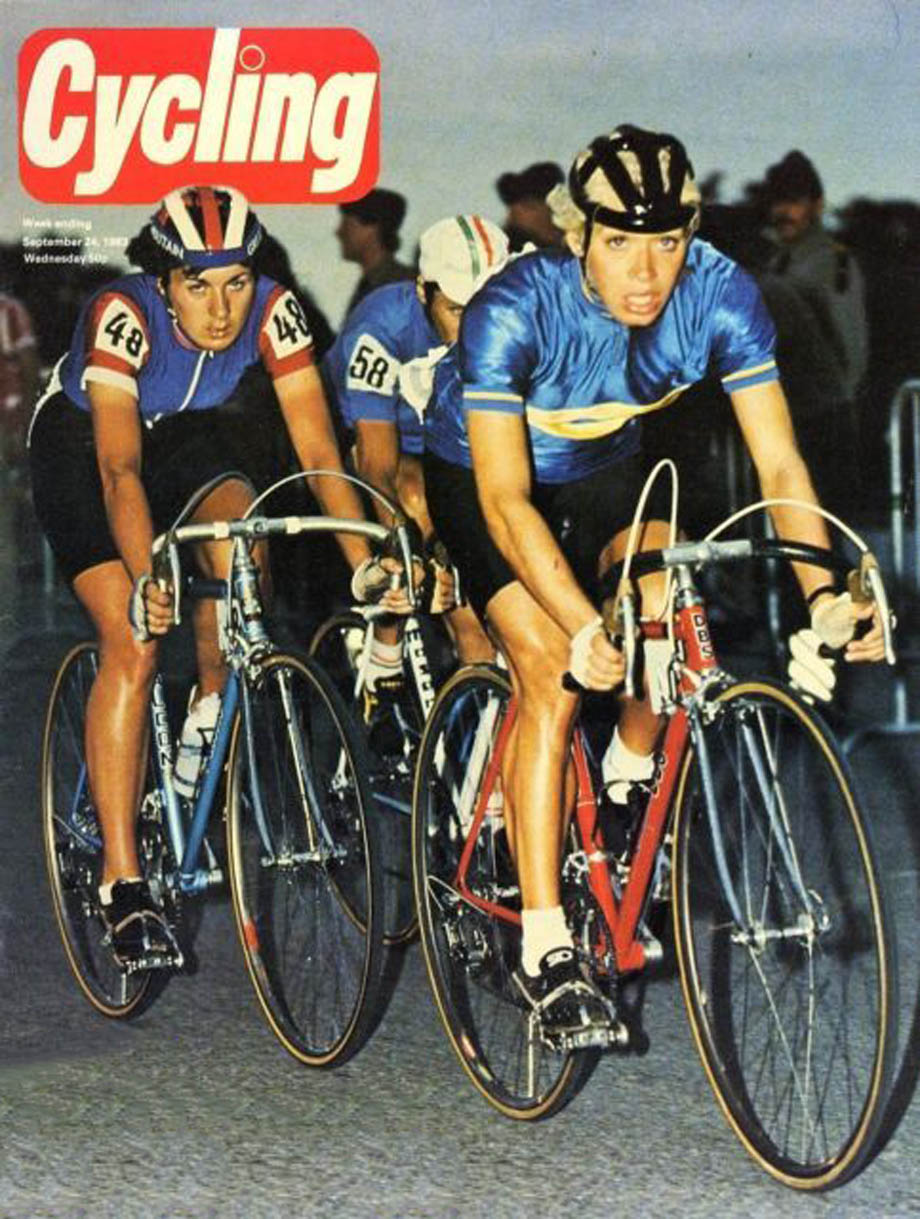 PEZ: The ’84 Los Angeles Games the first time the ladies got their Olympic chance – but a disappointment for you?
In ’84 I was so stubborn, over-trained; people smarter and wiser than me told me that I was training too much but I didn’t listen and ended up with health problems and anaemia. The Olympics weren’t good for me, I was involved in a crash in Seoul in ’88 – but that was my fault, I should have been further up the bunch. 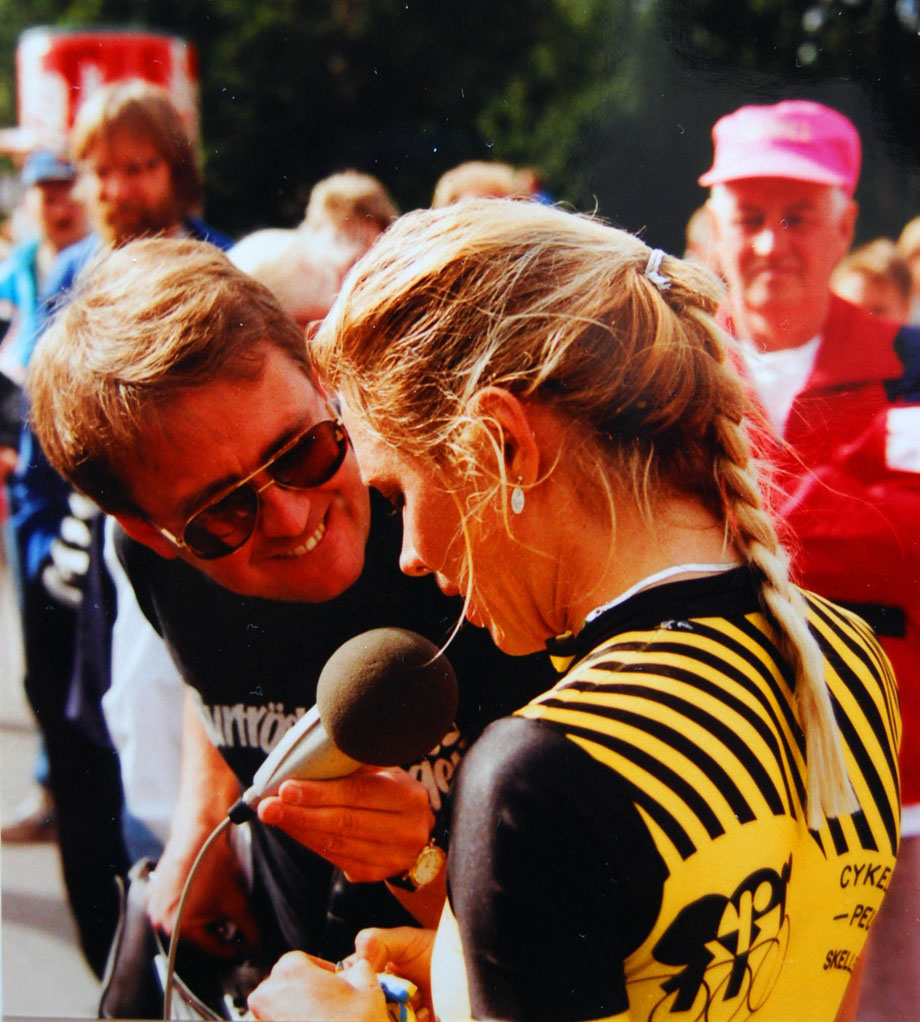 How was the race?

PEZ: As a lady racer in the 80’s in the US what was it like getting support?
It was a good time in the US but not so much in Europe. In the US there were strong promoters, men like Richard Degarmo who organised the Tour of Texas and just loved the sport. And there were good ladies’ teams like 7-eleven and Levis so we got a lot of attention, it was a great time to be in the sport, a lot of fun, I was lucky to be around in that era. 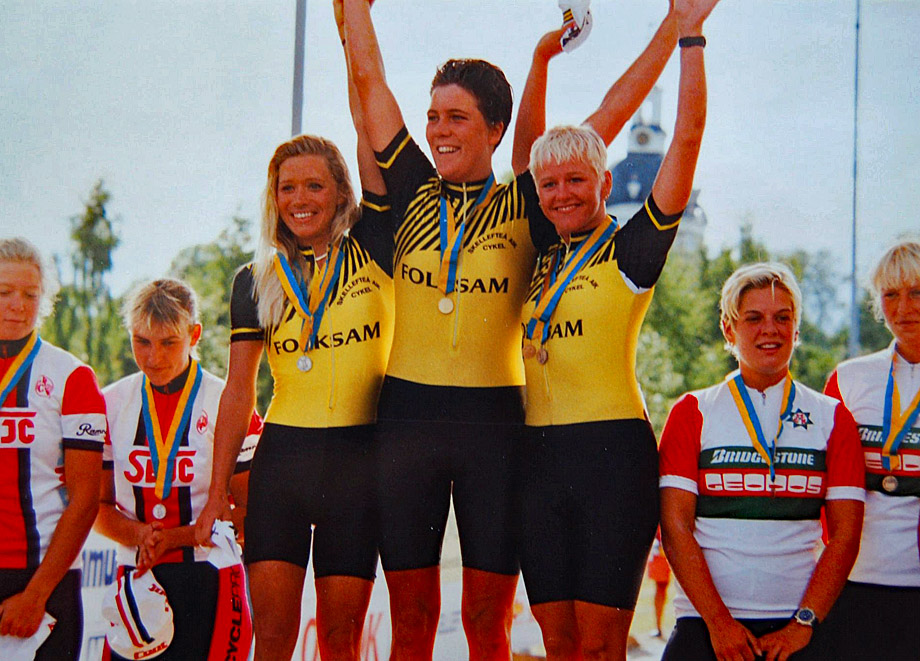 Berglund, Johansson and Jonsson on the podium

PEZ: Is the figure of 100 criterium wins correct?
Yes, they were my passion, I loved riding crits, in the 80’s through the early 90’s they were a big thing in the US they attracted the media. They were fast, loud, dangerous and great for a sprinter like me. 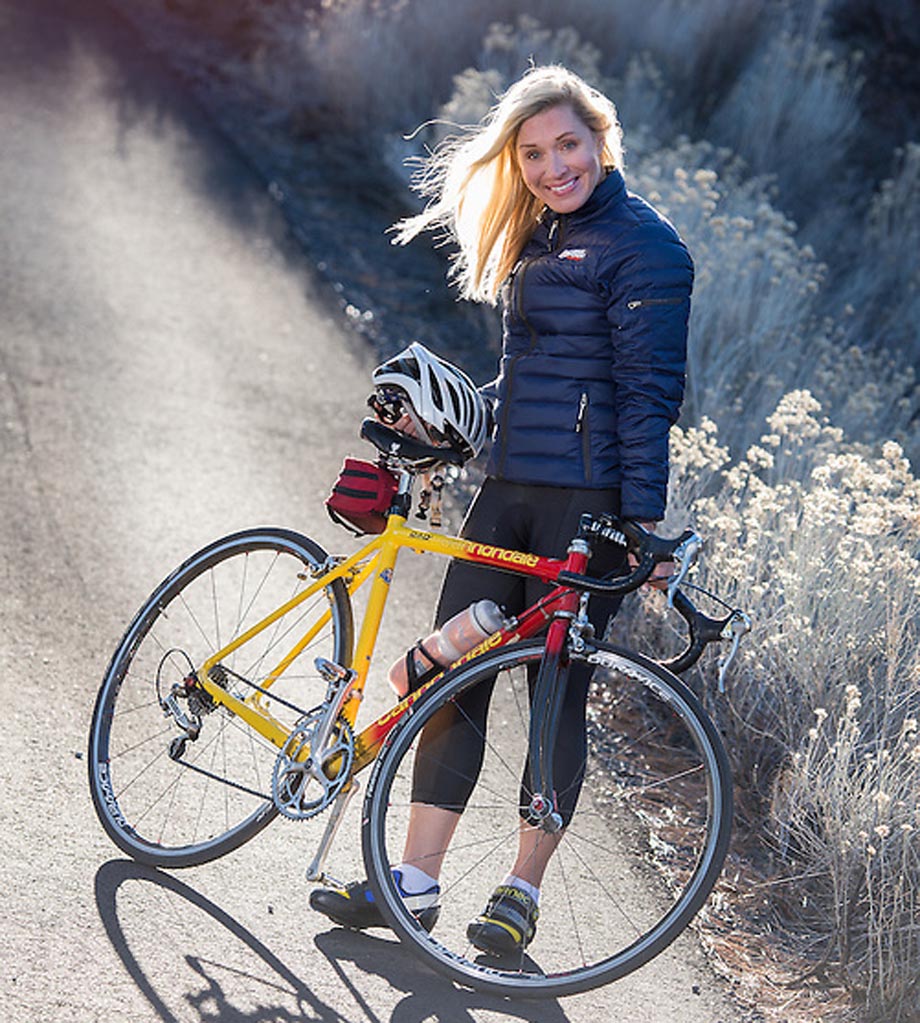 PEZ: And you won the famous ‘Philly’ race in ’94?
Yes, the ‘Liberty Classic,’ the unofficial ladies’ US pro championship which was on the same parcours as the men’s race, climbing the famous ‘Manayunk Wall’ in front of a huge crowd who were all there to party. I owe that one to the amazing team support I had that day from my Bodywise team – they were great that day. 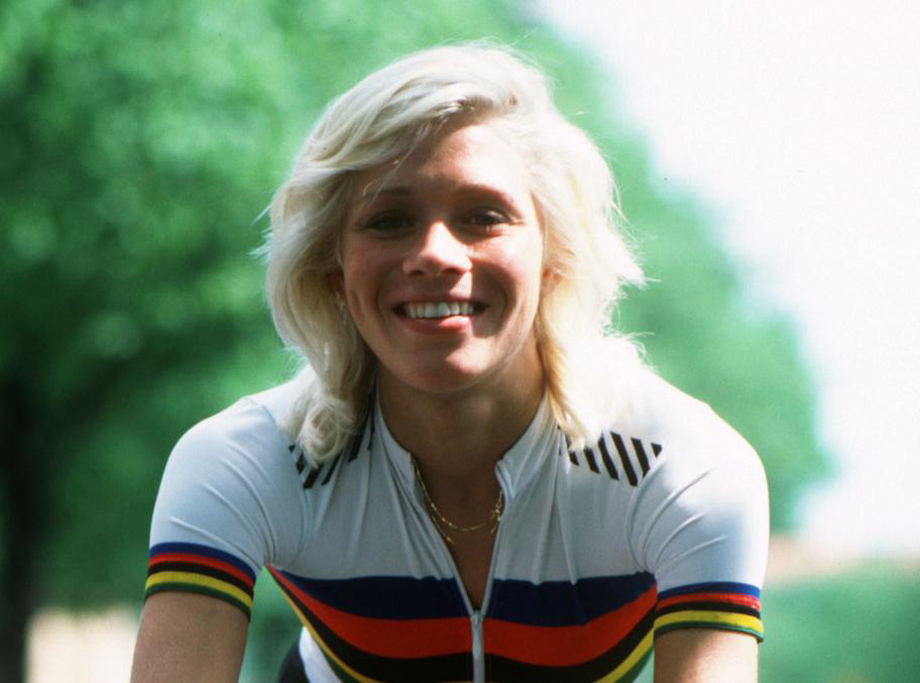 PEZ: Your finest hour?
That would have to be the Worlds, it really launched me in the USA and enabled me to embark upon a career racing against girls like Connie Carpenter and all the other top riders of the day. I had years of fun racing; and whilst Philly was pretty special there were lots of other great races along the way. But I was lucky, I had great team mates, when I was tired, feeling flat and didn’t have great legs they were there for me, lifted me and I’d ‘click’ again. 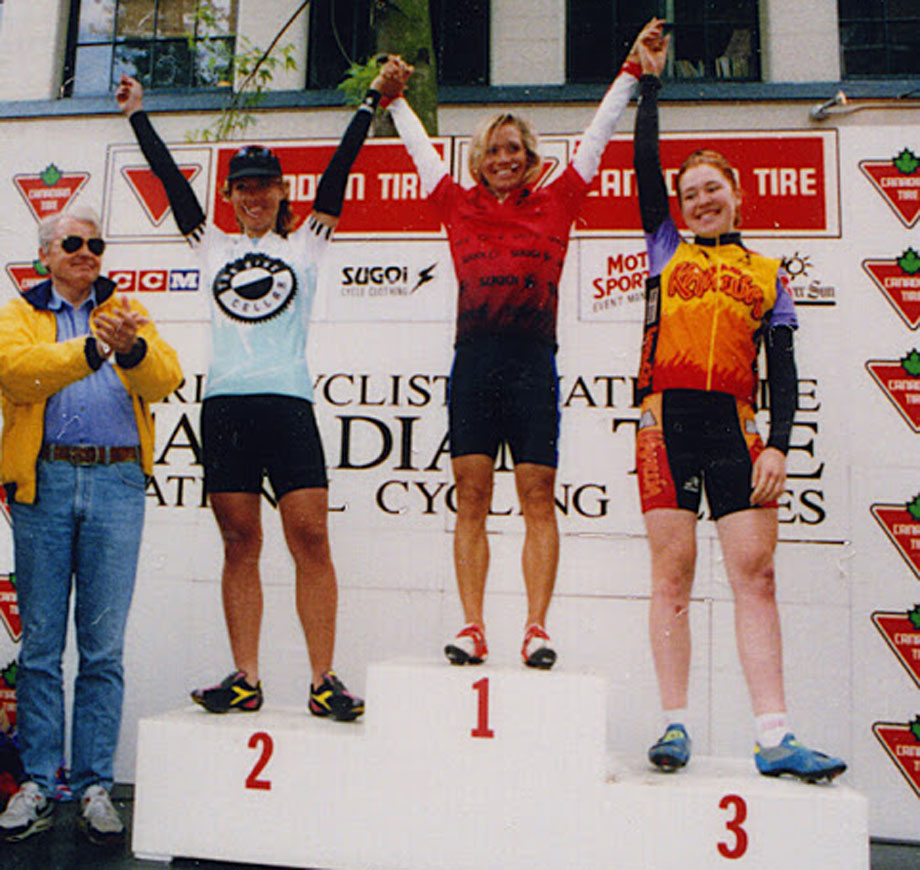 PEZ: You had a long career, wins from the Swedish junior championships in ’78 through to McLane Pacific Classic stages in ’95.
I always had great support from sponsors and team mates and had so much fun along the way, that was one thing but I was also lucky in that I didn’t get injured too much. Sure, I had crashes and ended up with road rash but no really bad ones – and I was also lucky that I didn’t get sick too often. 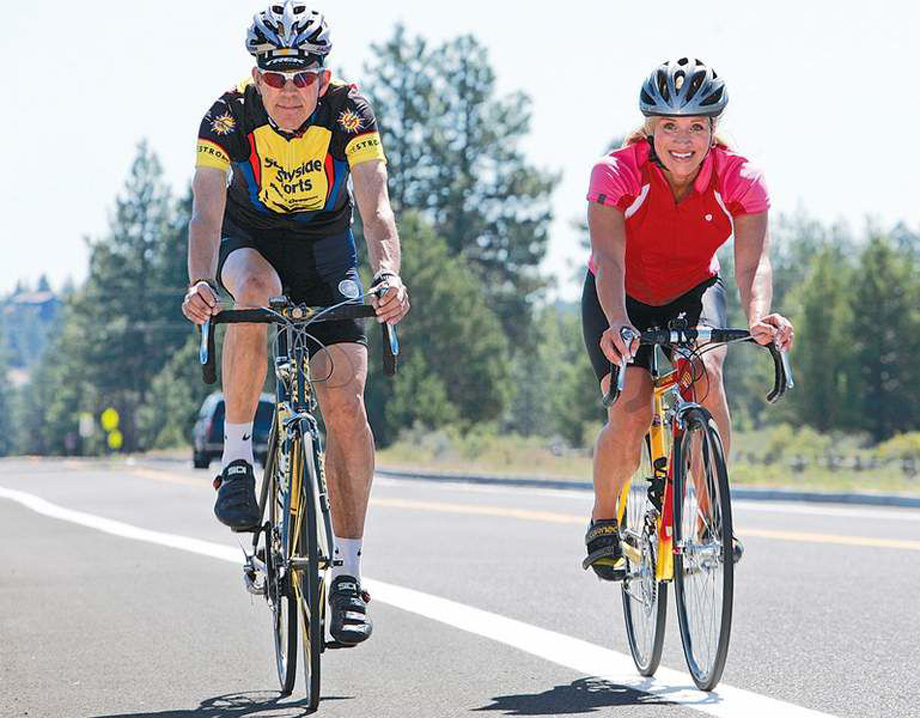 PEZ: What was it like the first day you weren’t a ‘racer’ anymore?
I transitioned without any problems, I was ready to be done with my racing career. My race was at Long Beach, I remember putting my shoes in their bag and thinking that was the end of one chapter and the start of another. I flew up to San Francisco next day and started my new career as a management consultant. A great new career traveling all over the world – Denmark, Spain, Japan – working with executives, using the experience I gained in cycling when it comes to team dynamics and leadership, it seemed like a natural transition. It’s a career which was as challenging and dynamic as being a bike racer so I had no problems at all with the change of career.

# Thanks to Marianne Berglund for her time and to the photographers, known and unknown. #