Riders do all kinds of things to relax before the start of a big race, and it turns out Adelaide, Australia has some fine options. We hooked up with Navigator’s Phil Zajicek for the mother of all cheese hunts in the hours before the Tour Down Under. 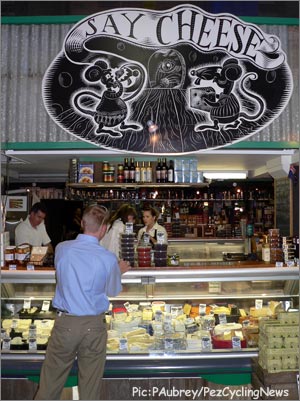 So much cheese, so little time…

When you arrive in Adelaide you will notice two things immediately, the Polites signs closely followed by how quiet the town is. Soon, with the need to eat, you will discover the Adelaide central markets; it has everything under the sun.

The Polites signs are everywhere throughout the city. I decided to ask a local, the concierge at the Adelaide Hilton for the run down. Put succinctly, they represent buildings owned by the Polites family, a rags to riches property developer in Adelaide.

Before the Tour Down Under commenced I had planned to cruise around the produce markets with Navigator’s Phil Zajicek to sample some cheeses. With Adelaide being so quiet, the markets are closed on Sunday and Monday’s, so we had a problem before we even got started. Subsequently the plan was for Phil to let me know when he had a spare hour or two on Tuesday. It was Monday evening when I was enjoying myself at the Belgium Beer Bar, when Phil rang me to set the time, 8am Tuesday morning. I knew there was a reason why I didn’t have another beer!

Armed with only water crackers to cleanse the palette, a camera and my iPod I bravely stepped into Phil Zajicek’s world of cheese! 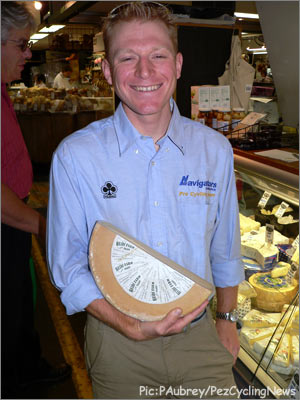 A boy and his cheese…

Our first stop was the Say Cheese. The service was fantastic; Phil and I enjoyed 6 Australian cheeses. First on the menu was a King Island Brie, the connoisseur opinion, mild and super smooth. Like a seasoned expert, the first step was always to smell the cheese followed by questions such as the age, the Brie was 10 – 12 weeks old.

Some Charlestown Camembert was next, mild but not as smooth. Too the amusement of Phil, I dismally failed the double blind test to distinguish the Brie and Camembert. 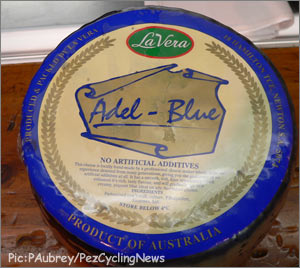 Some real local produce was then dished out, a mild Adelaide Blue and sharp but not over bearing Murray Bridge Cheddar. According to the authority, the cheddar is great for sandwiches. Now comes the only cycling reference in this whole story, Murray Bridge has hosted a stage finish of the Tour Down Under back in 2001, Italian Fabio Sacchi won the stage. 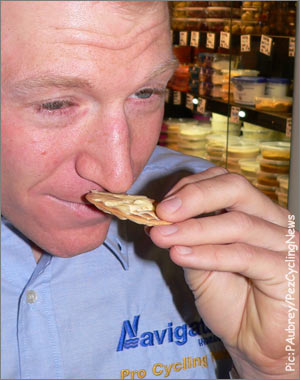 Smell it – smell IT! Phil’s nose knows a thing about cheese.

The cheese kept coming, and I was forced out of my comfort zone. A quince paste surrounded a stronger blue, the expert opinion, “beautiful contrast”. Last but not least was a smelly cheese, a Heidi Farm Tilsit, “a nice complexed Tilsit.” 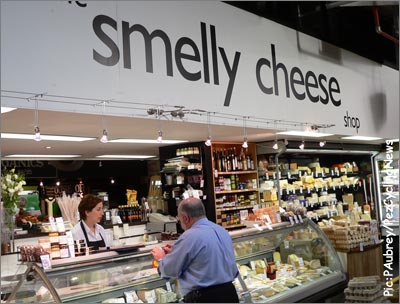 As we wandered around the markets, we came across the appropriately named Smelly Cheese Shop that featured in Phil’s TDU diary last year. It was here Phil found one of his favourites, a Reggiano Parmigiano. Next stop was Leo’s, a Tasmanian Young Gouda was tasted, it just didn’t compare with the all time favourite Old Amsterdam aged Dutch Gouda. 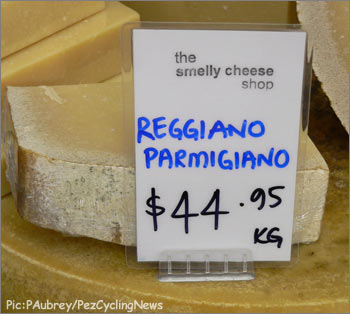 We then moved on for some de-brief espressos at Cibo’s, Phil must have left an impression as they still could remember him from last year. Whilst enjoying the great coffee the smell of the Tilsit emanated from our hands, let’s just say I don’t think it has the nicest of odours. On a more serious note, the verdict of the cheese tasting expedition, Phil’s favourites were the King Island Brie and the Adelaide Blue.

Be sure to stay tuned to Pez for more Tour Down Under coverage or check out Phil’s site www.philzaijcek.com

The Science of Testing 1: Testing the Tests