On Sunday, July 20, PEZ Insider Andrea Peron finished 4th on the tough stage to Loudenville, having a go to attack Simoni, Virenque and Dufaux in the final meters. Thanks to the French internet, this story did not arrive in time for posting, but Dunc talked with Andrea after the stage about the dya, and the news from the bunch. As usual from Dunc, it’s a great read, so even if a bit late – here it is… 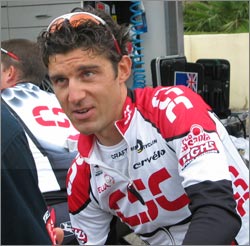 What a weekend… sport action sport action… there’s Tiger Woods in England hitting his ball long, but left and right (I can do THAT Tiger!!) even losing his ball on the first (now Tiger….let me have a word in your ear… you’re not copying me are you??) In England also…there is Schumacher driving his Formula 1 car all over the place, making mistakes…shock horror… and not winning, plus a mad Englishman running between the cars on the track in the middle of the race in protest against something!! The Chinese in Barcellona are not dominating the Diving competition in the World Swimming Championships, in France there are the US POSTMEN not delievering the letters at the usual speed… and Armstrong who looks slightly lost… THEN…..when all looks like it’s settled down… my mate ANDREA PERON catches Virenque, Dufaux and Simoni 200mtrs from the line and nearly snatches the Stage… my God I need a beer!!

If this is going to happen next year, I’m going to invite you all to my house for these 3 weeks as it’s all too much to cope with on my own. What more do you want to celebrate the 100th Birthday of the TDF?? Three men in a space of 18secs! 18secs! 18secs, What can you do in 18secs?!

I just want to mention a rider that isn’t getting a lot of media coverage and NOBODY even mentioned him in their top 5 to win the A_style T-shirt….IVAN BASSO. Do you know that this lad is only 25years old and Armstrong for the last two years had him following up every mountain… he isn’t a great cronoman but will get better, this year he is going even better in the mountains and apart from the TT that Ullrich blew apart , he hasn’t had a bad day!!! He is worth supporting, even in Italy he doesn’t get much space PLUS he is riding without a team, Fasso Bortolo are down to 3 men, so he is riding all by himself. Give him a cheer.

After, I have to phone Andrea Peron, to ask him a few things about today’s stage, which he has already sent me a message saying he needed a bit of luck to win, but to ask him the general feeling in the peleton. But have you noticed that Armstrong is constantly off his saddle? And constantly changing gears? Have you noticed that Ullrich and Armstrong are the only riders to keep their helmets fastened always? Good boys. Have you noticed that Mancebo rides his bike as if he is side saddle on horse….all crocked?? Did you know that Herman Maier, the great Austrian downhill skier, went 3 minutes before the first official rider on the opening day’s Prologue and rode the course in 8mins 45secs! Now while I’m waiting to call Andrea then finish up this article, I’m going to watch some more swimming from the World’s (thank goodness there is Ian Thorpe to bring back some stability in my life!!!) and while you guys and girls….any girls???… are waiting you can think up the most original or usefull thing you are capable of doing in 18secs………..yes those 18 secs that separate the top 3 riders and yes I’ll send an A-style t-shirt to the most original. Send me them ASAP!

Just a note on the Top 5 finishers competition for the A-style t-shirt…thanks for the huge response and some of the compliments, Thanks.

PEZ: Andrea, what are you doing making me shout like that at the TV!… well done, what a descent you made. Tell me about it??

AP: Well to tell you the truth, I went down well but not anything special,I think they went down slow. I’m not bad a descending but I didn’t push to the limit taking any risks!

PEZ: When Virenque, Simoni and Dufaux got bored with your company and attacked, what did you do?

AP: When Dufaux attacked and Simoni , Virenque followed, I just went up with my own pace. When these pure climbers attack, it hurts and is impossible for someone like me to respond at the same pace. I just increased my pace slightly and hoped to limit the damage.

PEZ: You where 1min 15secs behind at the top of the climb, at the bottom how far behind where you?

AP: I think around a minute, I saw all the cars in front, so I knew I was close. They were going slowly as they were playing for position for the finish but I think they forgot about me. Then on the little climb before the finish I saw them up in front of me…I was going strong but they were going even more slowly… then I saw Virenque turned around and he saw me.

PEZ: What does your Team Manager say to you at this point?

PEZ: When you caught Virenque, Simoni and Dufaux within the last KM, what was your intention?

AP: My only chance was to surprise them by going past them at maximum speed, hoping that I got a 20m lead on them. I had used a lot on the chase so it would have been a waste to sprint out with them. I played my best card and it nearly worked… just needed that bit of luck.

PEZ: When Virenque finally got your wheel, you basically at that stage launched the sprint which favoured Simoni? (Virenque and Dufaux are great friends and would have played cat and dog with Simoni,)

AP: Maybe so…they would have played against Simoni…maybe I was a godsend for Simoni. But you know after a long day on the attack, a sprint in three is very un-predictable.

PEZ: What is the general feeling in the Peleton, on Armstrong?

AP: Well…maybe Armstrong is slightly…and I mean slightly under par but Ullrich as we all know is class….Vino’ is going well then the attacks came from the Spaniards and after 2weeks all this mounts up to tiredness. He’ll battle ….he has set the standards in the last 4 years and the others have trained to that standard. I think that more than Armstrong not going well… the others are going better and there are more of them!

PEZ: Do you feel that US Postal are slightly under par this year in comparison to their general high standards?

AP: In the mountains yes. It’s noticable… but then again the other teams are always getting stronger…US POSTAL set the standards!

PEZ: We all love Hamilton, and he has become a hero not only in the USA but also in Europe. How is he ?

PEZ; Is it true that there was a bit of friction between Sastre and Hamilton as Sastre went to win the Stage and didn’t wait and help Hamilton who was in a bit of trouble?

AP; NO NO. Sastre was there to win the Stage… if he didn’t have any chance he would have stopped and waited… we were ALL pleased for him… He had a free run that day and he did well to win the stage.

PEZ: These A-style tshirts are becoming popular thanks to you. We have a little competion running to win a A-style t-shirt. Name the top 5 finishers in this years TDF!!?

AP: I don’t know Dunc. Ullrich Armstrong Vino’ obviously but not sure in which order… for the rest….I don’t know… you said something about Basso, but there is the TT and he never attacks with the intent to gain places as he is scared to loss places… riding a bit….how do you say… without salt!!

PEZ: Thanks for your time Andrea, I know you are tired, but we were all shouting for you today. Sei stato grande.