VERSUS television hosted their annual pre-Tour press conference with Phil Liggett and Paul Sherwen, and although attendance seemed sparse compared to previous years, PEZ was there the voices of cycling for the English-speaking world did not hold back in looking ahead to this year’s race.

Phil & Paul have pretty much been covering pr cycling since before I was even a fan – Phil for 38 years, and Paul for around 29 years. When it comes to the modern era of cyling, it’s fair to say they’ve seen it all.

Since the end of the Lance –era, we fans have waited with great anticipation for the emergence of the new guard – the new stars who’ll make the Tour an exciting race again. And for the past two years, we’ve been hood-winked and head-slapped with the proverbial wet-fish by what appeared on the surface to be a free-for-all dopefest. Le Grand Boucle has threatened to become le Grande “Debacle”. Just when we thought that the Floyd Affair was rock bottom, the flood gates opened even wider in 2007 with what I saw as the most disgraceful Tour ever. I lost count of how many “top” riders got booted for doin’ da dope. 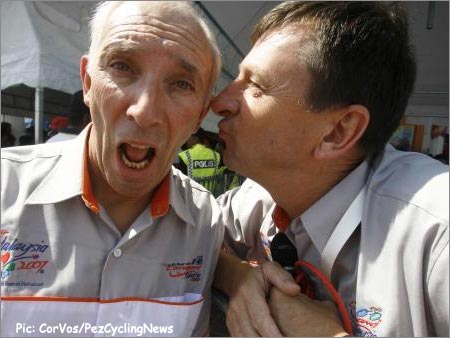 But I’m a fan to my core, and I do believe in good triumphing over evil, and I see the good guys are winning the fight – Slipstream’s TTT win at the Giro is a gleaming example. So I look forward to this year’s Tour full of hope and excitement (once again) – and I dream of a drug free race. Still, I can’t escape that niggling itch I just can’t seem to scratch – are we gonna be scammed again?

With this in mind, I was hot on my touch-tone keypad and selected as lead-off question by the moderator…

PEZ: Hello Phil and Paul. It’s good to be back for my “6th” Tour de France covering this as media… Given all the negative publicity around the tour and the shenanigans of certain individuals in recent years, what do you guys think is going to be different about this Tour?

PHIL: Richard, I think that we’ve worked very hard to clean up the Tour, and I’m talking to an expert here (you’ve only done six tours, I can’t believe that!). I feel that they are winning the battle. First of all, I know we’ve got this silly absolutely stupid situation regarding Tom Boonen, who won the Green Jersey last year. Now, it’s being caught in an Out of Competition Test and it’s like catching the wrong fish in the net, but he’s been caught for taking a social drug [cocaine] which is against the law, but not against the laws of cycling, and the organization has banned him from riding in the event. I think rightly so, but I think Tom has made a very immature slip there and that’s a shame, and that’s the type of thing we don’t want to hear.

The good news is the season has gone well for cycling this year, and the UCI has more than two and a half thousands out of competition tests this year. That’s the only way to catch people who are taking drugs to their performances. Marian Jones did it, she got away with it, if she hadn’t confessed we would never have known that she cheated her way to the 2000 Olympic Gold Medals. The fact is now, these guys in the build up of these races, they go away and take these drugs, let them pass through their systems, they come to the race and they’re clean apparently, but they’re on top form. That can’t happen now because of the drug tests, and you can bet your bottom dollar that every rider who has even a smell of winning a stage or the overall Tour de France will have been Out of Competition tested before he gets to the start of the Tour.

So you can’t stop speeding motors, there’ll always be criminals in the world but I think we will have no dope at Tour de France for the first time in many many years. And the people who will be cheering the most will be the riders because they won’t have to look over their shoulders anymore.

PAUL: I’ll just take up after what Phil said, and I think that’s the important thing. We talk about the bad stories that have been involved with cycling, but the thing that you must always remember is the people who lead the battle against doping are not the international federations, it’s not the sponsors, it was initially (a long time ago) the cyclist themselves. They wanted a level playing field again.

I do believe that cycling has been very naпve in the way that it’s handled the doping problem in the sport. But, I suppose from its naivety it is also in line with its transparency, and cycling is much more transparent in its battle against drug taking and doping in sport than any other sport, which is why we’ve seen the delay in certain sports coming out with the results of people who may have been positive for drugs in 2004 in the Olympics or in 2002, or 1996.

The great thing about cycling is that it has been at the forefront, it’s taken it on the chin and I really believe that with a lot of the things that the cyclists are agreeing to participate in – the biological passport for example, and the teams themselves and the sponsors. You’ll never win the battle with people who want to cheat, as Phil mentioned like people driving cars under the influence, you’ll never beat that battle but you’ll reduce the chance of drug taking, you’ll reduce the chance of someone driving a car while under the influence of alcohol. I think that’s the important thing, we are now winning the battle and reducing the percentage of somebody cheating. It was the teams, the organizations and the international federation last year who were very brave, in removing the leader of the Tour de France from possibly winning, three days away from the end of the Tour de France. That’s a very gutsy decision for a sponsor to say, “right, sorry we don’t believe what you’ve been telling us, we’re removing you.” Those are hard decisions that corporation have to take, they’re hard decisions that management has to take, and the riders themselves are a lot happier with leveling out the playing field.

• Versus will carry front to back coverage of Le Tour starting July 5th – see the website for more info: Versus.com/tdf
• In Canada see OLN at TSN.ca