No interview with Lance would be complete without asking about the 2004 Tour de France, Alpe d’Huez, and his work with the Lance Armstrong Foundation. And that almost wraps up our 20 minutes…

GOTTA TALK TOUR
PEZ: As we sit here today and you’ve got the Tour coming up, obviously there’s a lot of pressure because of the magnitude of what you could accomplish. What are your thoughts? Is it anticipation, is it anxiety, is it excitement – are you eager to go?

LA: I’m realistic. This is not my first tour so I know that January is a long way from July. I’m eager to get the season started but the fact that I suffer on group rides with these guys (at team training camp) – does that worry me – not at all. Would it have worried me five years ago? It would have but now I have enough experience and knowledge to know that there’s a lot of time to go. 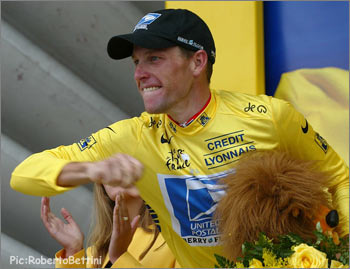 PEZ: What’s your favorite climb in the tour?

LA: My favorite or the hardest?

Lance exhales…”It’s tough between Ventoux and alpe d’Huez…and Ventoux’s the hardest. Ventoux – if I had’ve won Ventoux it would probably have been my favorite.”

PEZ: Some would say you did… 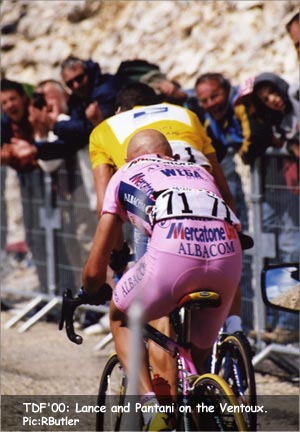 PEZ: You’ve actually had two good cracks at it and you’ve had two great rides on it.

LA: Yeah, they’ve both been beneficial to winning the tour but they haven’t won that stage. It’s just a legendary peak – I’ll get it! I hoped they’d put it in this year.

PEZ: That’s what I was hoping too.

LA: Next year…, but you know, if I start asking them to do that then they won’t (laughs).

IT’S ALL ABOUT THE ALPE
PEZ: Speaking of alpe d’Huez – it’s a time-trial in the ’04 tour. There’s been a lot of discussion around it and a lot of people are saying it’s a pivotal stage. At the same time there was a mountain time-trial at Chamrousse (a mountain climb about 40km west of alpe d’Huez) a couple of years ago. Do you see alpe d’Huez as a pivotal stage and if so how would it be different than the time trial at Chamrousse? 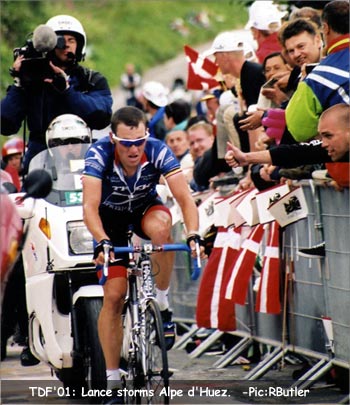 PEZ: What are the differences on the alpe d’Huez stage? It’s always been raced as a road stage. What happens differently as a TT? Obviously there’s no group dynamic. One of the questions I have with respect to Jan is that Jan is more of a tempo rider and he can’t deal with the changes in tempo.

LA: It’s a hard climb for a tempo rider because it’s steep. It’s steep and the corners are flat. So inevitably there’s a change in rhythm. You’re going slow because it’s steep and then you get these flat lonnng sweeping corners and you really get going again. So that just on its own changes the tempo, changes your cadence, changes your speed and it is…when it’s steep man, IT IS STEEP. And it’s relentless – it just goes.

PEZ: Having made the alpe almost like my summer home over the past few years I can relate. I feel a sense of relief as I discover that this legendary climb commands the respect of even the world’s greatest bike racer. Lance continues to describe the climb…,

LA: And it is one of those things that has its own air about it – like Ventoux. You can ride any other mountain in the alpes but when you’re on alpe d’Huez it’s different. The people are there and it’s thick – especially last year – last year was incredibly hot.

And again, I don’t think it’s a climb for a tempo guy. I mean, look at Mayo, Mayo won. One of the most explosive guys out there. If he had to script the perfect day he would have 2 million tempo changes. He LOVES tempo changes. When he tried to kill me in the Dauphine we know he was being instructed to constantly change the rhythm. Slow down, speed up, slow down, speed up. He loves that, so it’s perfect for him. 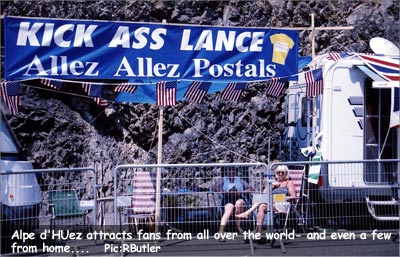 The LAF
PEZ: You started the Lance Armstrong Foundation and you built it into something on an international scale. As I understand it you’re focused now on cancer survivors. Among other things, you’ve spoken at the Press Club in Washington, and after the tour you spoke in France to an international group. Where do you see that going, where do you want to take it?

LA: Well we’ll just – we have our niche. By focusing on survivorship you’re dealing with a topic that’s… not the most common thing you think of when you think of cancer – but you’re also talking about curing 65% of all patients. So you’re going to produce a lot of cancer survivors. And for the people who have made it through it makes all the sense in the world. And for their loved ones it makes a lot of sense and for their closest friends it makes a lot of sense.

But we’re not looking to be the next United Way, the next American Cancer Society. We’ve got our niche, we’ve got a great group of volunteers and people who help us out. We raise all the money that we think we need. Of course it always helps to raise more but we’ve done – I don’t know – $30 million since inception and we thought if we ever got to $30 thousand we’d be lucky.

So it’s a dream come true. It will last, I suspect forever, whereas cycling will last another year or two years. It’s like parenthood – it’s forever whereas professional cycling is very short term.

PEZ: One of the things I see when I think of Lance Armstrong is, there’s a great bike rider but there’s also a great champion who has gone beyond the bike and created so much inspiration for so many people. One of the most emotional things that I see on the tour, and there is a range of emotions on the tour, is the Lance Armstrong survivors lining the route.

PEZ: I was wondering – are you actually visually aware that they are out there, particularly in places like Paris where they throng the Champs d’Elysees, and how does that make you feel?

LA: Oh – you know, it’s….you know sometimes it’s hard to see them as you go by. Many times they’re outside the bus or on the Champs d’Elysees it is easier to see. But any time I or we as a team have support it’s a big help. I mean we’re not French and we’re not Belgians and Spanish. People have to travel great distances to come see the race and to come to support us. Whether it’s a volunteer for the LAF or just a bike family, we appreciate all of that. 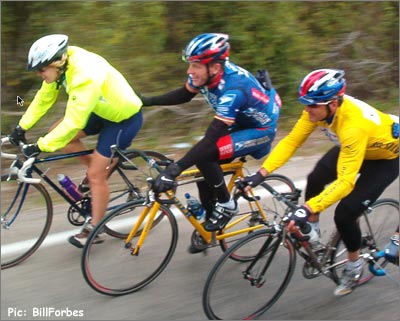 But when they carry – many of them have Lance Armstrong Foundation banners – it’s …it’s powerful stuff. You look out the bus window – unfortunately you can’t sit out there and have a conversation with them because things get crazy (ed: from the hordes of cycling fans and media) but they don’t care. I don’t think they care. They just want to be there. And they just want to say we’re here – you go do your thing and we’re here to support you. And that’s another great thing. They’re not there with any expectations, they’re just there to support.

Then Higgins returns, signalling the end of our interview: “Ok guys, I’ve gotta jump in – it’s backing up out here.”

LA: Give him two more.

An American In Paris?
PEZ: Thanks – I read that you recently rode up the Champs d’Elysees on your way to go training in the Bois de Boulogne. Is that true?

LA: Yeah – it was about six weeks ago.

PEZ: So here you are, five-time winner of the Tour de France, riding your bike training down cycling’s boulevard of dreams. What goes through your mind – are you thinking about the tour or are you just heading out training?

LA: It was actually getting kind of dark, rush hour. It was dangerous. Champs d’Elysees is a busy street so I was not thinking about what it was like the last time I was there (laughs). I was just thinking about not getting killed! And also trying to figure out how I was going to get to the Bois de Boulogne because it’s – I sort of know how to get there but I ended up getting lost.

And Those Winter Fitness Levels?
PEZ: If your fitness level in the tour is a 10, what would you let it get to during the off-season – what would be the lowest you would get to?

LA: I don’t think you start (the tour) with a 10 – I think you reach a 10 somewhere along the middle of the race when you need to be a 10. So you’re starting (the tour) about a 9. I would honestly say it gets down to a 4 or 5 – 4 in the dead of the off-season, maybe two months ago, around Thanksgiving.

Hearing this I feel a sense of relief. I take a celebratory pull on my Shiner Bock and reach for a Krispy Kreme. Then reality bites as I look across at the sculpted block of granite and sinew that is Lance Armstrong. I find myself wondering what a 10 must look like. Lance continues…

LA: But I’m probably not much better than a 5 now. And at this point you try to gain a point every month. I’m not in great shape right now. But I never have been in January. These guys (the team) come here and clobber me every day.

PEZ: ‘Right’ I say, looking at Higgins as he shakes his head and laughs.., ‘I doubt it’…

LA: They do, I’ll tell ya, they do, they kick my ass on a regular basis…

PEZ: Lance – can I get a picture taken of us together?

LA: Sure, yeah…the ‘Pez Interview’ – is that what you’re gonna call it?

PEZ: Exactly – Thanks a lot Lance. Best of luck to ya! We’ll be out there cheering for you.

LA: You betcha. Thank You!

A full thanks to Lance and US POSTAL for allowing us the chance to do this interview – as we said in part 1 – it’s definitely a high-water mark for PEZ! – we’ll see you in Paris!

Read More of our coverage of the US Postal Team Launch:
– The LANCE INTERVIEW Part1.

– Part 1 – The Morning Training Ride.
Part 2 – Inside The Press Conference.

Links to more Lance:
LanceArmstrong.com
Tailwind Sports
US Postal Team Website
LanceArmstrong Foundation
Like PEZ? Why not subscribe to our weekly newsletter to receive updates and reminders on what's cool in road cycling?