Ex-Rider Interview: The late 70s and early 80s was a great time for cycling, there were many ‘heroes of the road’, not just Eddy Merckx, but a load of Belgians and Italians. Johan De Muynck was a classy rider, but he was up against the system that kept the top men… at the top. De Muynck should have had a much bigger palmarès – he didn’t do too badly, Ed Hood finds out more. 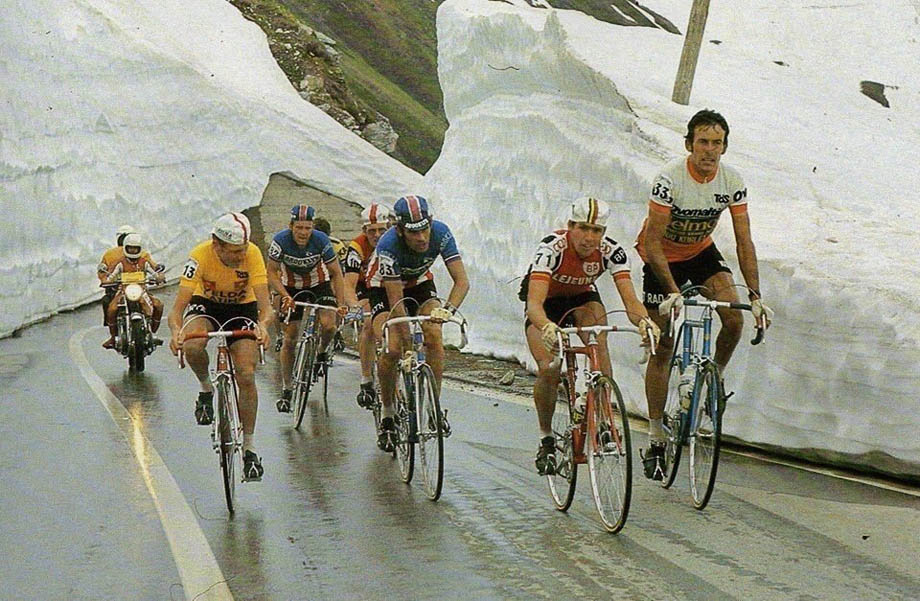 Michel Pollentier, Giro winner in 1977 on the left and 1978 winner Johan De Muynck in the middle. Tour de France winner Lucien Van Impe in the Lejeune jersey leading during the 1978 Tour du Suisse. Thanks to the photographer who ever he/she was

Name the last Belgian rider to win a Grand Tour, please. Let me help. It’s Mister Johan De Muynck and it’s now 42 years since the man from Sleidinge in East Flanders won the 1978 Giro d’Italia ahead of ‘Gibi’ Baronchelli, Francesco Moser, Wladimiro Panizza and Giuseppe Saronni – four of the biggest names in Italian cycling of that era. 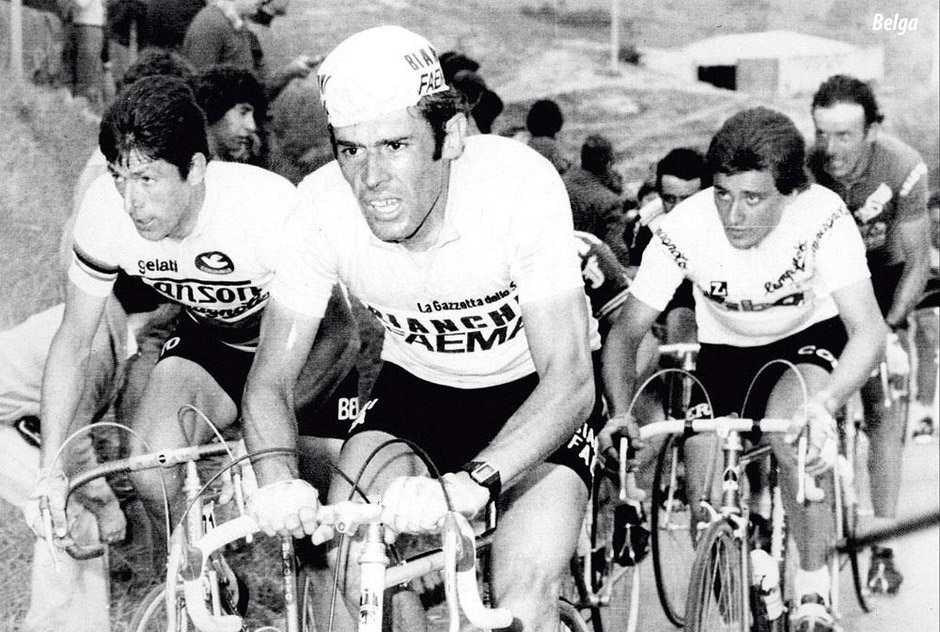 A talented amateur he turned professional with the ‘Red Brigade’ – the mighty Flandria team in 1971, Mars being the co-sponsors that year. He made pro podiums from the start in places like De Pinte, Geraardsbergen, Herstal, Sinaai, Roselaere and in the ‘sprinter’s race,’ the Scheldeprijs. He stayed with Flandria for three seasons before heading south and joining the team with arguably the coolest jersey ever – Brooklyn. He was with them for four seasons before opting for another team from la Bella Italia, Bianchi Faema. 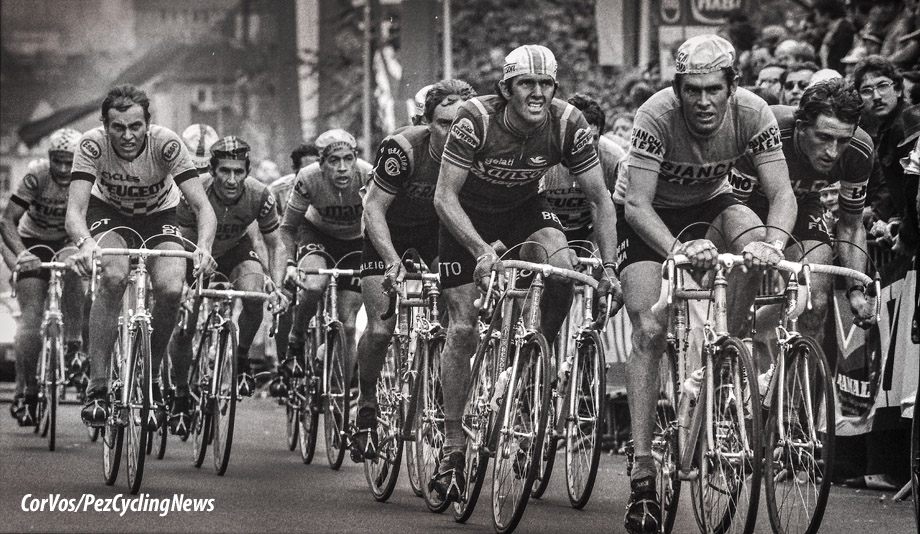 There followed two seasons with Splendor back in Belgium with his final two seasons spent with French team La Redoute – a move which he tells us was the worst decision of his career. Through the kind offices of Johan’s ex-Splendor team mate, New Zealand’s Vuelta stage winner, Paul Jesson we put our questions to the man the Belgian media always come to talk to at Giro time. 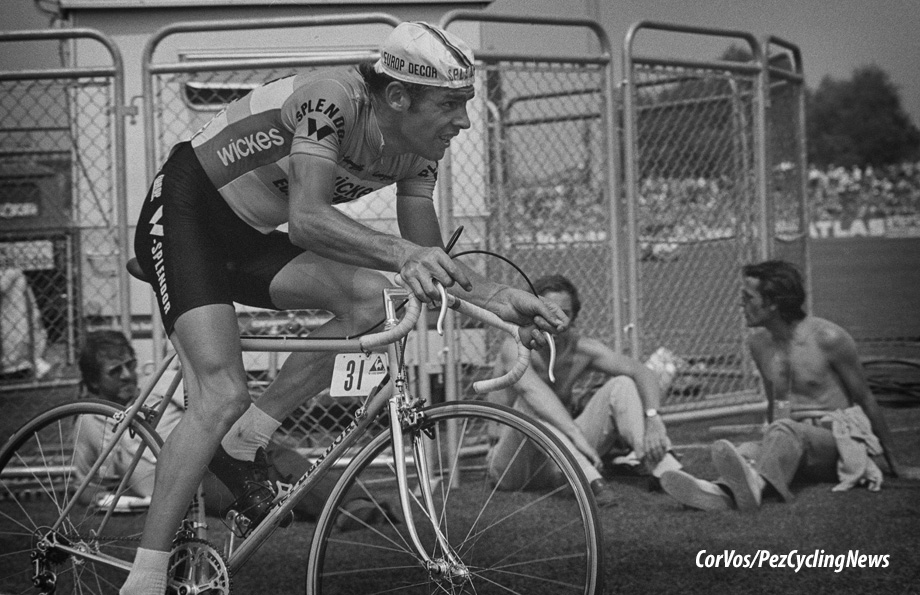 PEZ: As a Scotsman I am interested that you rode the Tour of Scotland in 1969, what are your memories?
Johan De Muynck: I have very fond memories of that Tour, of the beautiful mountainous landscapes and of the people. It was a very good experience. 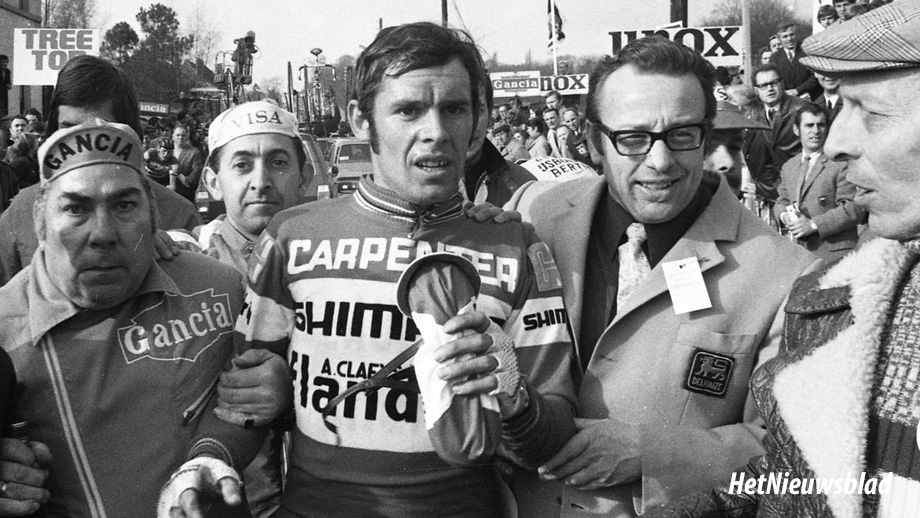 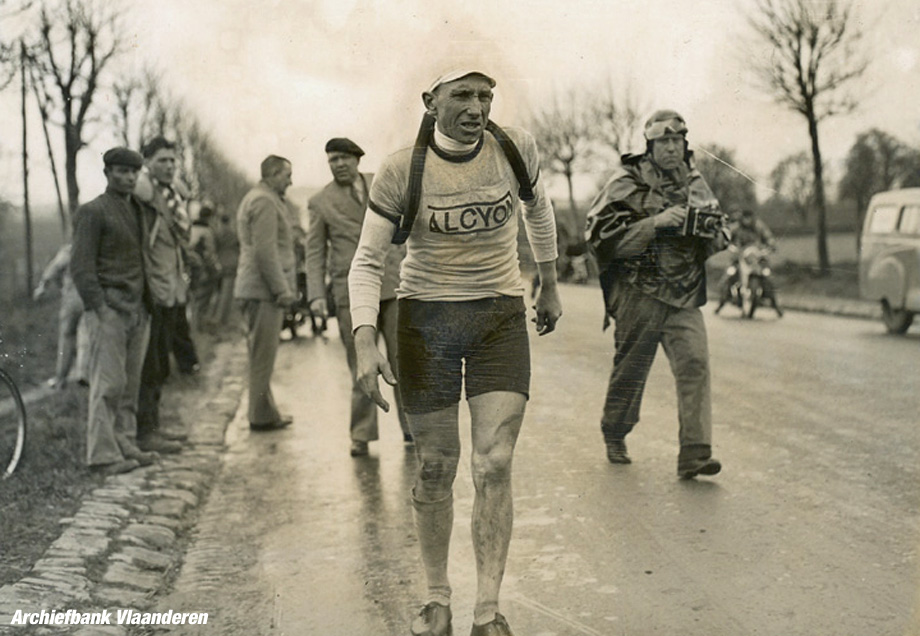 PEZ: Mr. Schotte was the manager, what was it like to ride for him?
Briek was good at managing young people. He was a man of few words, but his quotes were smart, they gave you food for thought. He gave young people a chance without exerting too much pressure. It was a positive collaboration. 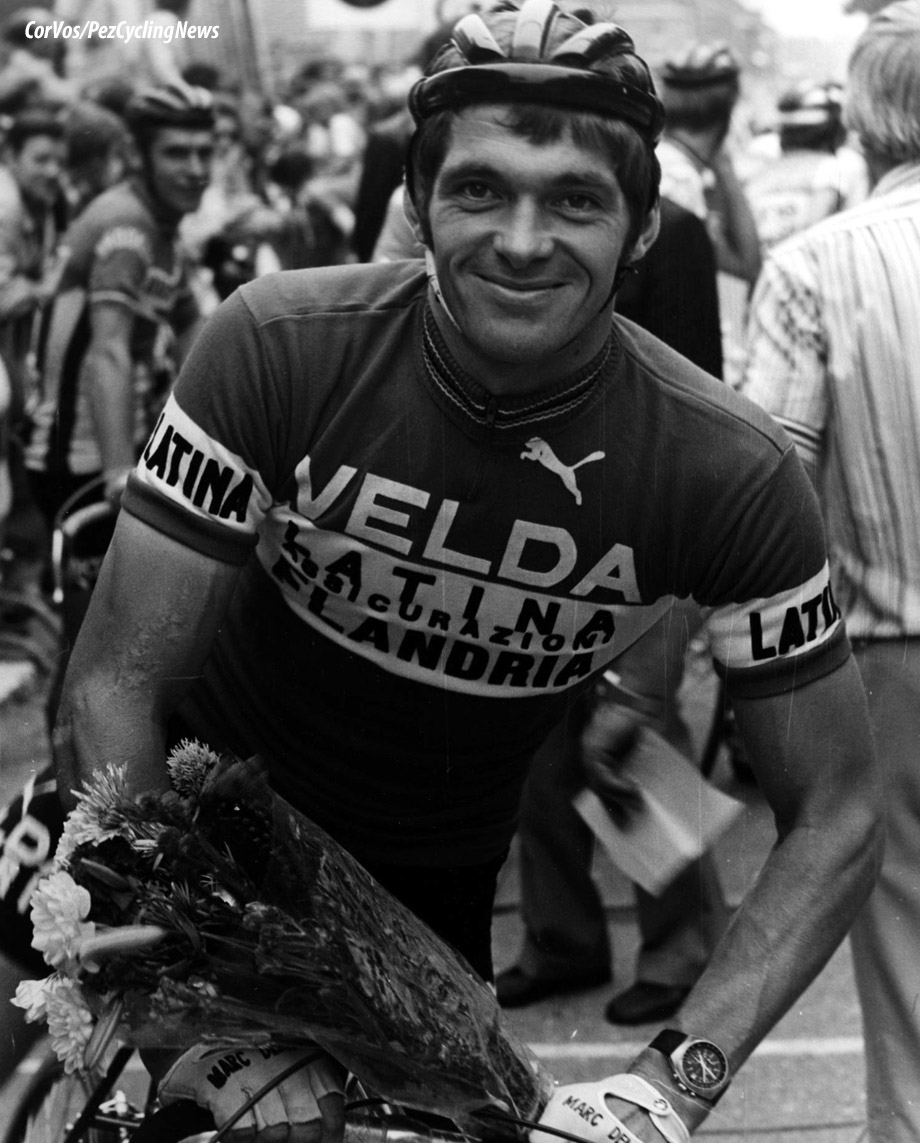 The late Marc Demeyer – Died at only 31 years of age

PEZ: You rode cyclo-cross too?
Yes, I did. It liked it, it was a good experience, but you can’t do everything and I chose road races over cyclo-cross.

PEZ: You won the Brabantse Pijl in 1973 – a hard race for a ‘climber’ to win?
It was not difficult to win, because the finish was uphill, on the Alsemberg. 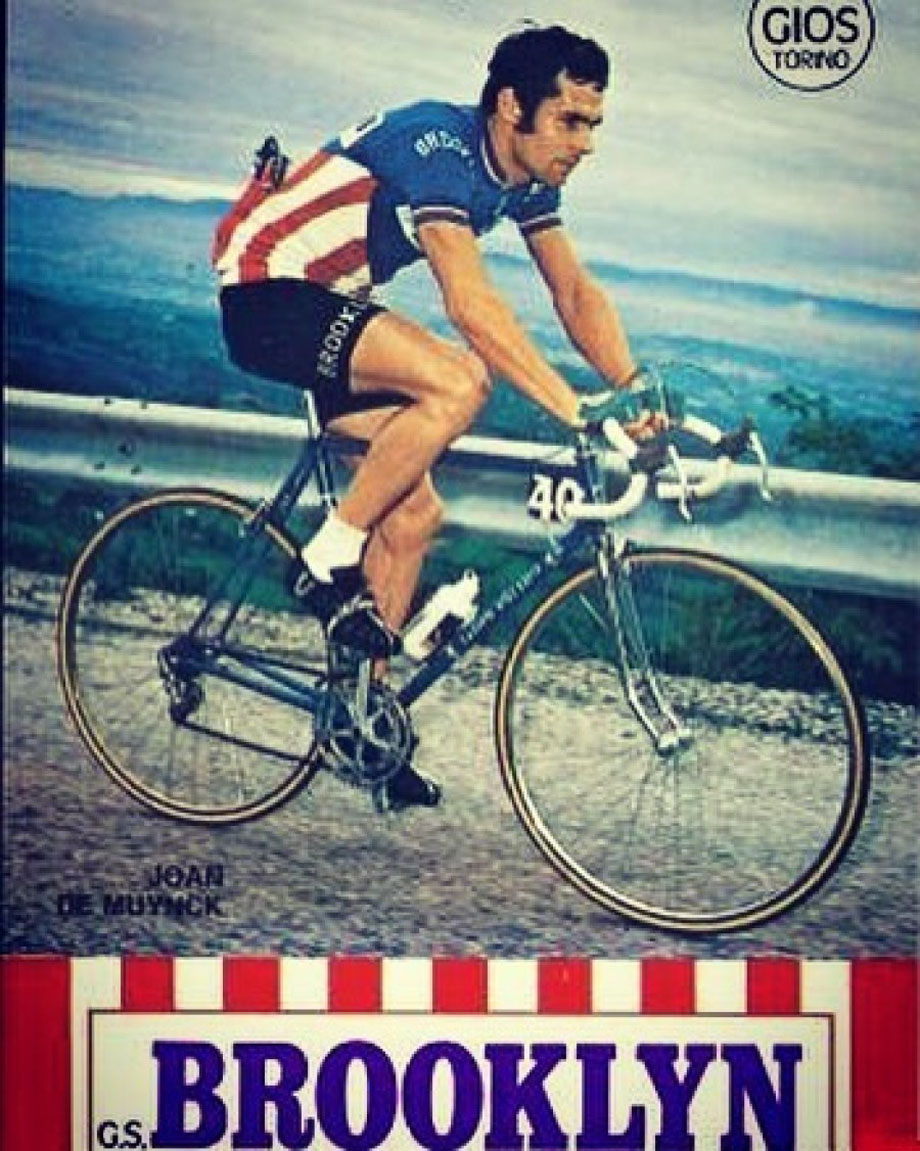 PEZ: Tell us about your move to Brooklyn and how was the mentality different from a Belgian team?
Everything was much more professional, all the details were taken care of. The equipment, the entourage were all better. It was a positive experience. 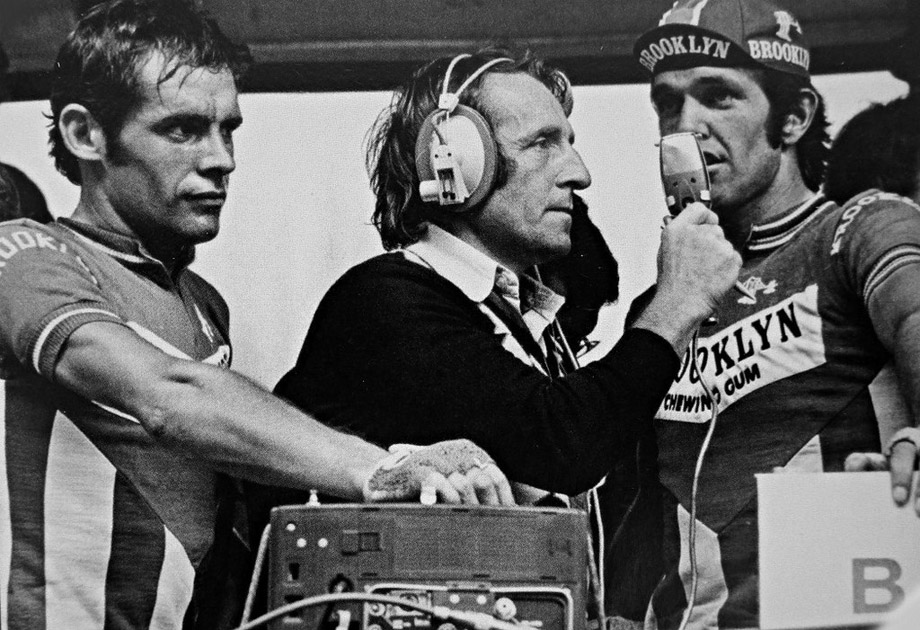 On the podium with ‘teammate’ De Vlaeminck

PEZ: I believe Roger De Vlaeminck was not an ideal teammate for you?
He was not really my teammate but my boss.

PEZ: You won the Tour of Romandie in 1976, a very nice result.
To me, it was a fantastic experience. It was my international breakthrough and I consider it my greatest win. It was all against one during that Tour and I managed to win. 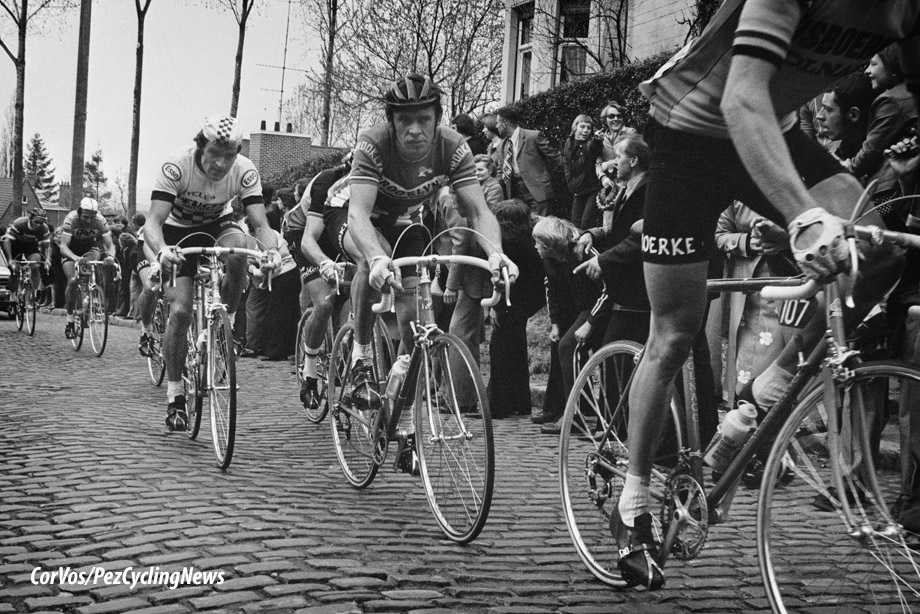 Riding the cobbles of the Ronde van Vlaanderen 1976, followed by Gilbert Duclos Lassalle

PEZ: You were second in Paris-Tours in 1977, the ‘sprinters classic’.
It was really Tours-Paris, in the opposite direction. That is why there were a lot of hills at the end of the race. It is clear from the ranking: 1. Zoetemelk, 2. De Muynck, 3. Kuiper. 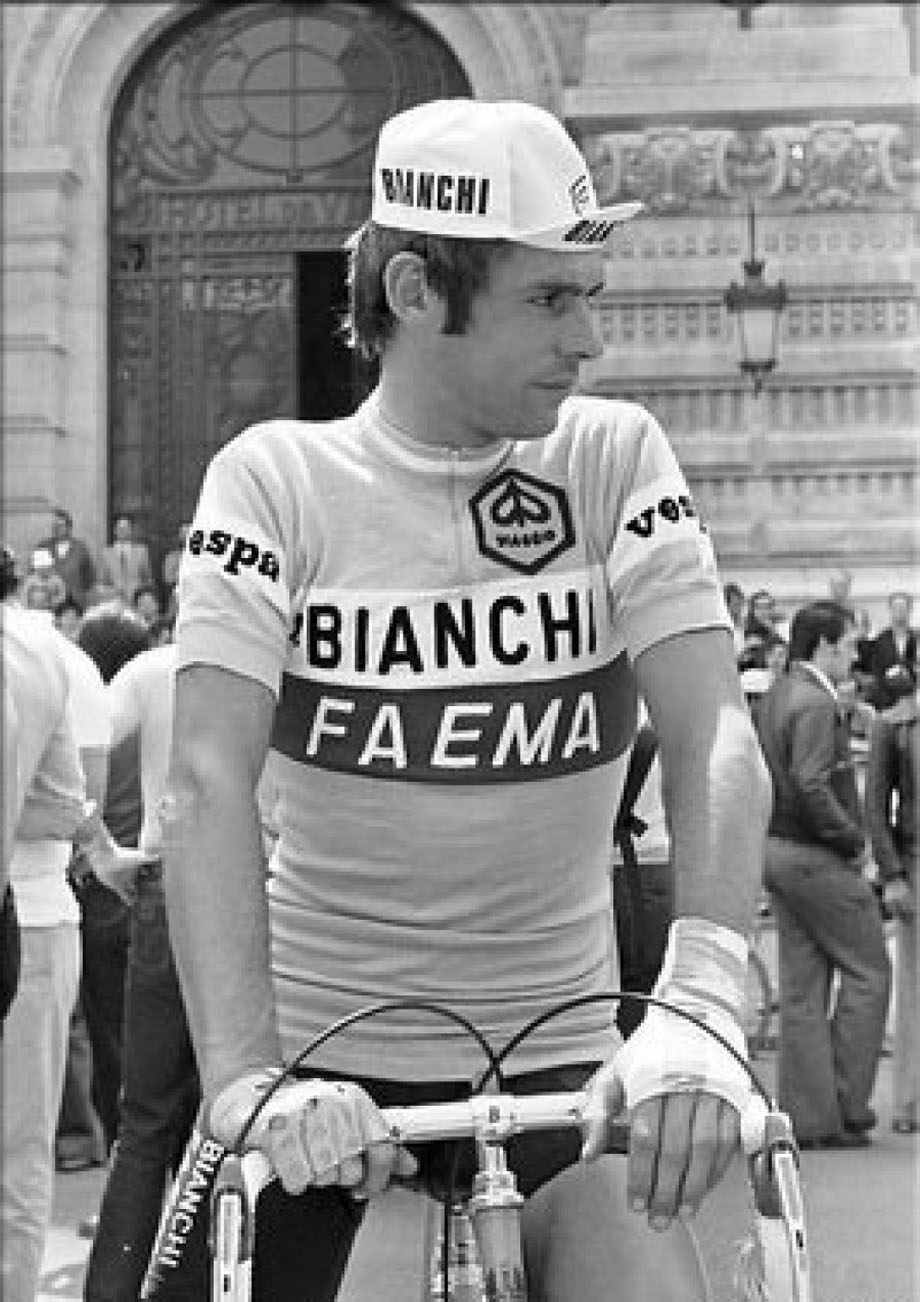 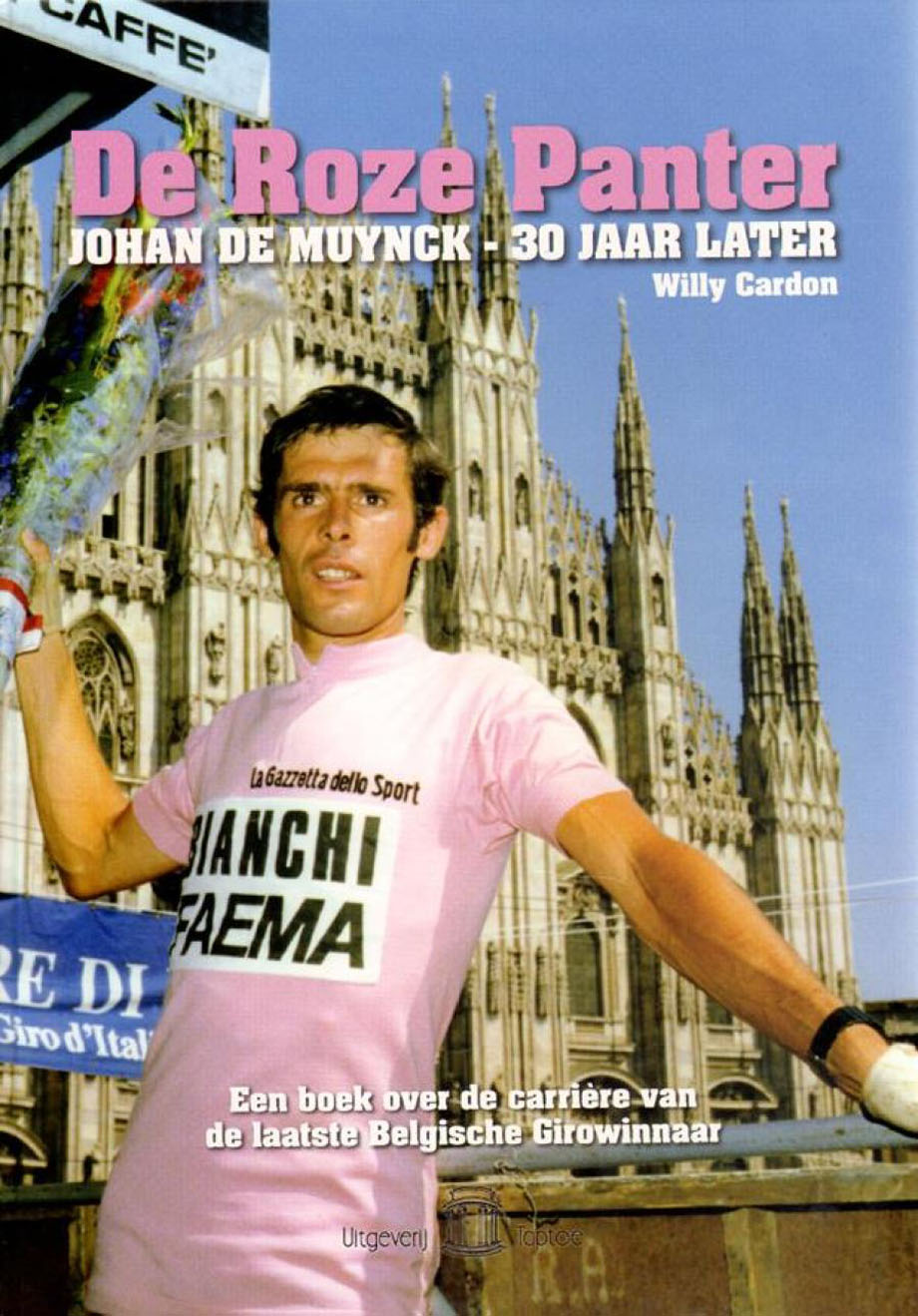 PEZ: Your Giro win in 1978, your memories?
I have very fond memories of this Giro. I was the best from start to finish and for me it was a confirmation of the Giro of 1976.

PEZ: Splendor for 1980, why go back to a Belgian team – and how was your relationship with Claude Criquielion?
I went back to a Belgian team because I wanted to be home more, but it was a big mistake. From a professional point of view, I should have stayed in Italy or Spain. My relationship with Claude Criquielion could have been better. It was a case of “young against older”. 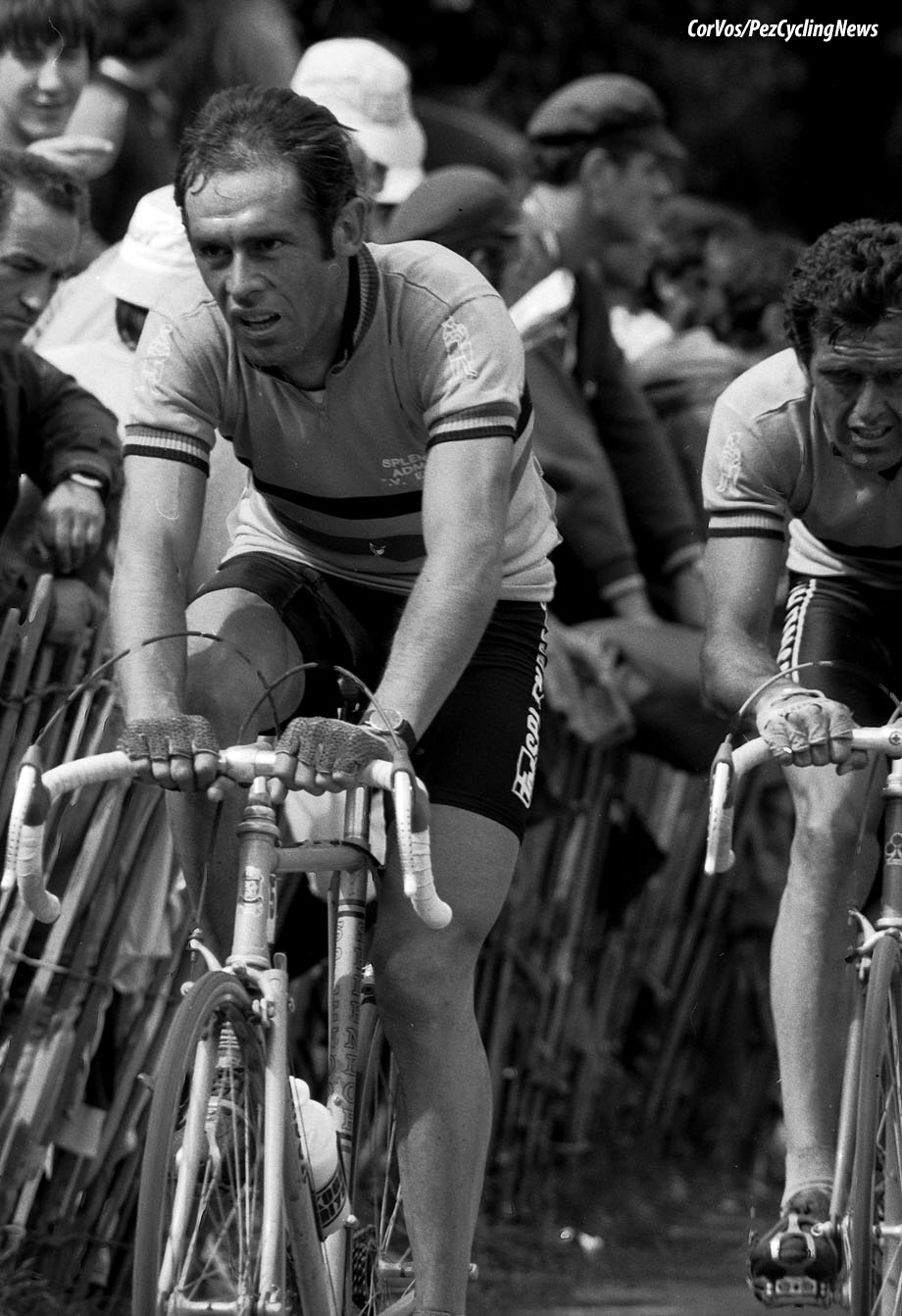 PEZ: Fourth in the Tour that year, tell us about that.
I was fourth, but I could have won if my team had supported me. So to me, it was a disappointing result because I could have won.

PEZ: La Redoute in 1982, how was the French team mentality compared to the Belgian and Italian teams?
The mentality was very bad. I had the French chauvinism to contend with. Opting for a French team was the biggest mistake of my career. 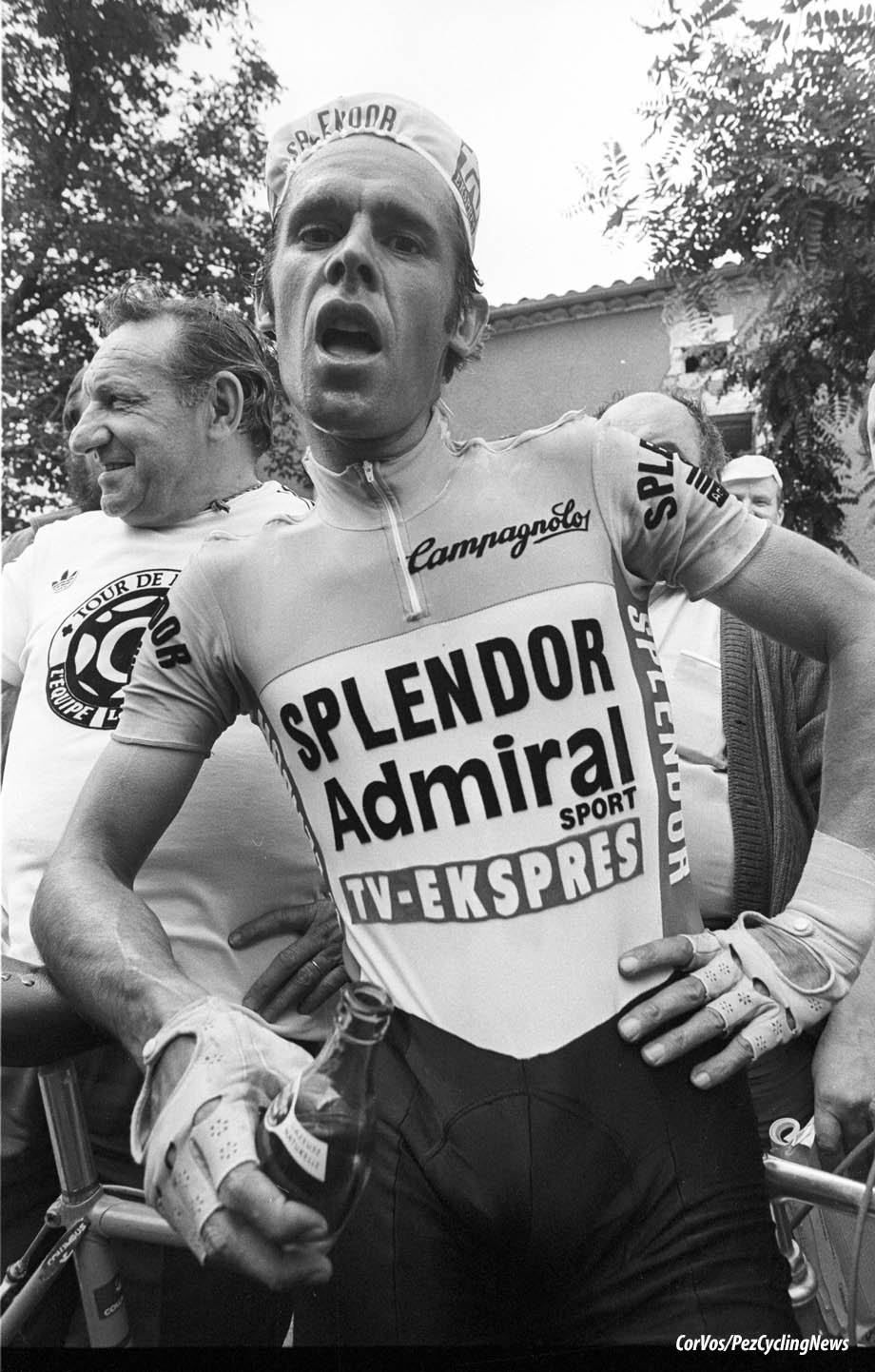 TT in the 1980 Tour de France with Splendor

PEZ: You are still the last Belgian Grand Tour winner, does this still generate a lot of media attention?
Yes, it does. I still get requests to do interviews, especially before and during the Giro.

PEZ: If you had your career over, what would you do differently?
I would go to Italy or Spain as soon as possible because the mentality in those countries suited me best. 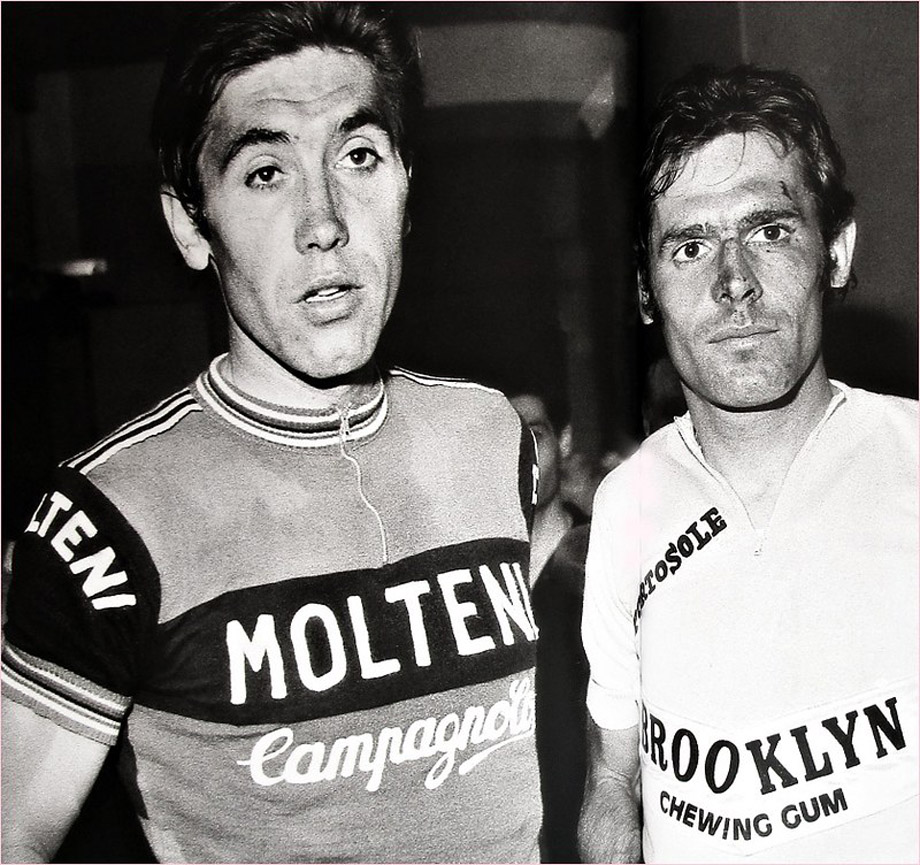 # With thanks to Yannick, Johan De Muynck, Paul Jesson and all the unknown photographers. # 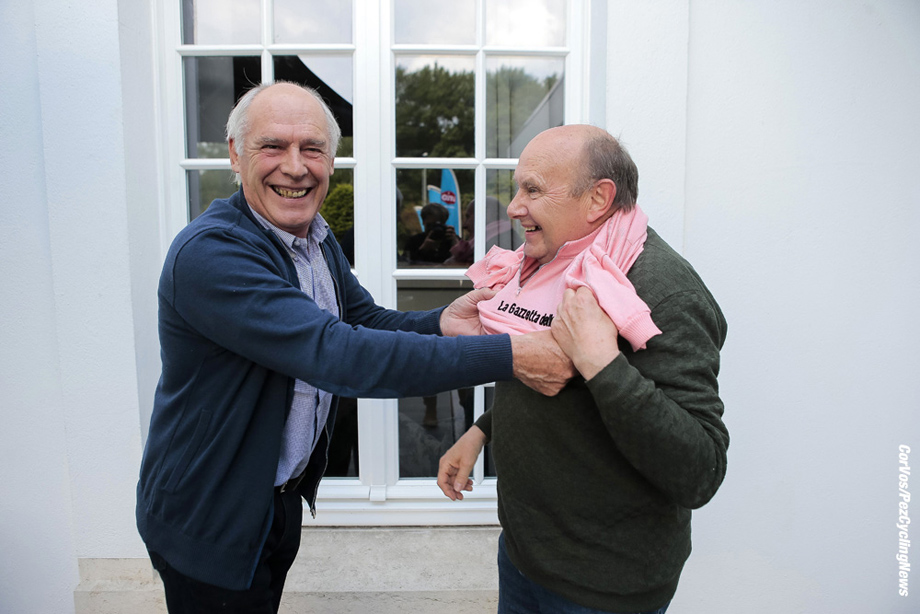