The MAGNUS Diary: From the Bench

Big Maggy Backstedt missed the Classics due to his healing knee, but he didn’t miss the action – pulling tv duties for Swedish EuroSport. Maggy checks in post-Roubaix, and answers a bunch more Reader Questions…

Knee News
Since the last update I have been having a lot of treatment on my knee, the Bio Resonance therapy is really working wonders on the healing. Due to this treatment I do think I should be able to get back on the bike a bit by the weekend. It will have to be very slow and easy to start with. Probably something in the region of 15-20min every second day on the hometrainer and then build it up from there as I feel capable of it. I’m hoping that I will be back for the Dauphine Libere early June, it might be that I will be able to do some small races before that, but I want to feel that I am ready for it and in full flight.

This has definitely changed my whole season, but not necessarily for the worse, I will come in to the Tour fresh and then there are plenty of nice races towards the back end of the season like Hamburg, Vuelta, Paris-Tours and so on. So I feel like I have missed a big part and to me an important part of the season, but it is by no means over. I’ll be back for some hardcore racing later. 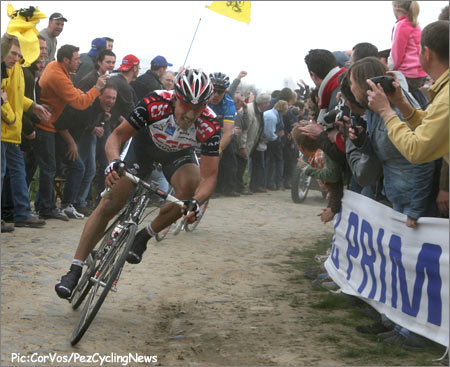 Missing the Classics
The last couple of weeks has been very hard for me, not only coping with this injury, but also having to watch my favourite races of the year on TV. At the same time as this hurts it gives me more motivation to come back next year even stronger and leave my mark on the racing again. Watching Roubaix was made a bit easier as I was commentating on Swedish Eurosport and I had something to keep my mind on rather than sitting at home in the sofa on my own. That would have sucked!!!

l’Arbre Antics
I noticed that the winning break went on the Carrefour de l’Arbre again this year, this has been the case in the last 2 years. This section is very hard, badly surfaced and really long, plus that it comes at a time when you are really starting feeling the km in your legs. It is also the perfect distance from the finish to go alone on. I think that if you go back 15 years in time the winning break must have been made here at least 10 times.

As for the racing I think that Tom Boonen was riding like some kind of a superman in Flanders, he was definitely the strongest guy. I thought when I was watching Gent-Wevelgem on the Wednesday that he was looking a bit tired, so I wasn’t surprised when he was having a bit of a rough time in Roubaix. The man has been flying since the start of the year and sooner or later he has to run out of steam.

Cancellara did a great Roubaix, he has been there or thereabout for a few years now so I had him as one of the pre race favourites together with George Hincapie. Both of these guys deserve to win this race, not only because they have been close a few times now, but also because they are two of the nicest guys in the peloton.

I hope George can come back and win this race (not next year though, cos that one is mine). It seems like the Discovery boys were suffering from a lot of bad luck with Hammond coming down in Flanders and having to get 14 stitches right under his knee. This is his second year of bad luck prior to Roubaix, but no doubt Rog will be back again, he’s a tough boy.

As for Tour of Flanders I was expecting to see a bit more from
Van Petegem. He was still there, but I thought he would be able to follow Hoste and Boonen.

Until next time
Ciao

ASK MAGGY!
The Maggy Mailbag runneth over this week, so here’s what you asked and what Magnus answered!

What’s Next?
1. Maggy, I like to see you in the pro-peloton for years yet, but what-if any-media, would you consider when you from racing? You are truly so good at the radio, tv and documentation stuff, you are a natural. Your warmth and charm make the racing more accessible to us and it is always a pleasure to watch you or read
what you have to say. I think it would be a great pity if you chose not to follow your skills and talent through in this way, some time in the future.
– Thank-you and same to Pez – Janine Conteh

Maggy Sez: I would definitely consider doing some more media work. I especially enjoy commentating. Thank you for your nice words though! [Ed. Note – Maggy covered the cobbled classics for Scandinavian tv, and reportedly did a great job.]

We’re Not Worthy!
2. I wonder if Magnus has any idea how incredibly popular he is in America?? All I need to do to start a worship-fest is say “How ’bout that Maggy?!” and every cyclist I’m riding with will go on and on about much they love watching Magnus ride.? How is his increasing popularity affecting his lifestyle and his training?
– Paul Hurdlow

Maggy Sez: I have understood a little bit after being at the Interbike show in Vegas the last 2 years. But then again you never really believe that you
are that popular. I can’t say that it has any real effect on my training or lifestyle. I live in Wales and cycling isn’t such a big sport here, so the people leave me to do my thing.

Tossing Off
3. Assuming you could hold him by one foot and one hand and spin around like a shot-putter, how far do you think you could throw Michael Rasmussen? More than 10 yards? What about Mayo? Just wondering,
– Steve Wisner

Maggy Sez: That is a very good question. I shall have to look in to that a
bit. I guess the one I would be able to throw the furthest would be
Freddy Gonzales, the guy from Selle Italia.

Spin Or Push?
4. I am also 6’3″ and have a question about cadence. Is it better for large guys to spin like Lance, or use our larger legs and a bigger gear? Especially for amateurs like me who only race 1 or 2 times per month vs each day for 3 weeks.
– Don from Boston

Maggy Sez: This is a very individual thing. You have to go with what you
feel more comfortable with. There are some things to think about though. If you are able to pedal a small gear for the more part of the day, but have the power to be able to turn some big gears when you need it (at the end of a race) then that is as far as I am concerned the best way of doing things.

Planning Ahead
5. I know sometimes you’re the leader for your team and other races you ride in support of the leader. In the big stage races are you “instructed” not to go 100% in TT’s? If GC is not your goal, and you go only 75% is this frowned upon or smiled upon. I’m sure every DS is different, but why thrash your legs if tomorrow you need to ride 6 passes?
– Thomas

Maggy Sez: Sometimes you do think a day ahead when you come to the TT’s. I generally want to go flat out, but then if there is like you said a
mountain stage with 6 passes the day after there might be and advantage
to take it easy.

Amazing Mass
6. It’s not a question it’s wonder at your likely muscle mass. I’m 6’2 ish and about 84kilo but about 24% fat. So say 65k with zero fat, and that includes my puny wee muscles. You were 91k at the end of the winter, 6% fat say 85K core weight. That 20k extra muscle represents a lot of hard graft and why you go a bike that much better than me!!!
Well impressed and all the best for this season.
PS lousy on the hills but I love them.
– John Picken

Maggy Sez: Thanks. You have definitely spent some time researching and doing some calculations there. I appreciate your support.

7. Maggie, you are certainly the inspiration for all of us big guys the world over. With all your muscle mass, how do you approach building your power? What’s been your experience in your yearly training cycle between “in the gym” (free weights versus machines) and working out on the road (SFR: slow force repeats versus long steady climbing in mid-rpm ranges?).
– Riccardo Bulissimo – 203 cms/ 88 kgs and unfortunately, 11% b.f.

Maggy Sez: I tend to work a lot in the gym during the off season, but when we start to get to late December or early January I switch to doing SFR. I
have always been a big believer in the free weights. I think that you get to use all those little muscles around the main ones as well and that is as far as I’m concerned a good thing. The machines are very robotic and I don’t like them so much. This I think is coming from my time as a downhill skier when I only worked with freeweights. I do think it is very important that you do work a lot on your leg speed if you do big hours in the gym though.

Making History
8. Magnus – Looking back on your career, was there ever a race that you
were in when you saw a rider or a team do something really impressive,
where you knew you were seeing history being made?
– John Robinson

Maggy Sez: Wow, that’s a deep one! I don’t think you ever realize that you are seeing history in making. I think the closest I would get is when
Lance Armstrong took his first yellow jersey. But I’m not sure if I realized it at the time or if Ijust realized it now when you asked the question!

One More ‘Big Guy ‘ Question
9. Magnus, Do you ever get tired of all the “You’re a big rider, I’m a big
rider” questions?
– Scott

Maggy Sez: No! I don’t mind and being one of the biggest riders in the
peloton I do understand how people want to know how I do things. I quite
like it actually!

ASK THE BIG MAN!
Gotta question for Maggy? Send us your thoughts and ideas, and we’ll choose one (or more if we feel like it) for Magnus to answer with each diary.
Send your questions to: [email protected]