The Man Behind The Madison Music: Peter Traynor

If you ever decide to promote a six day race there’s a check list you’ll have to go through. Start with a short steep indoor track; the best riders you can afford; food and drink concessions; a cool light show; a good ‘speaker’; maybe some live acts – but one of your key ingredients will be music. A six day final chase with no music would be unthinkable – be it live jazz in Grenoble, 70’s disco in Gent or funky trombones in Rotterdam, you need ‘sounds.’ Enter Peter Traynor.

Originally from the Wirral Peninsula across the Mersey River from Liverpool – the city that gave us the Beatles and the ‘Mersey Sound’ – he’s the man behind what’s blasting from the speakers at the German six days; he recently took time to talk to PEZ about his passion.

PEZ: How did you get into it, Pete?
Peter Traynor: I worked as a DJ in The Wirral for about 15 years and moved to Germany to work in radio in 1995.

I met Christian Stoll – who’s currently announcer at the Berlin and Bremen six days – at the radio station where I worked; he got me into it.

This year (2011) was my 12th year at Berlin; I also do Bremen and Zurich and used to do Stuttgart before it disappeared from the calendar – I’m not into statistics but I think I must have done around 50 sixes. 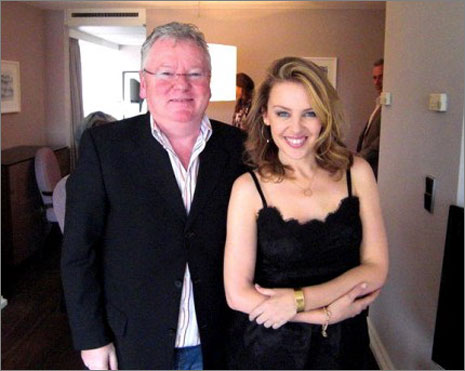 Peter stops to take a pic with Kylie.

PEZ: Music is your passion, isn’t it?
PT: The sixes are a hobby; it was my ambition to work at all of the German six days but now there’s no Dortmund, Munich or Stuttgart.

Away from the sixes I’m the music director for seven radio stations and involved in promoting gigs for artists like Roger Whitaker and Chris de Burg – I was also Sydney Youngblood’s manager for two or three years.

PEZ: Which is your favourite six?
PT: Bremen – it’s the ‘party six,’ I play stuff there that I don’t at Berlin; it’s different in the capital, the people are into the sport, it’s very loud and people like to use their whistles.

PEZ: How do you decide what to play?
PT: Experience – different music for different sixes.

You have to watch the fans’ and riders’ reaction to what you’re playing.

I also get requests from riders – but you can’t always play them, again, it’s down to experience. 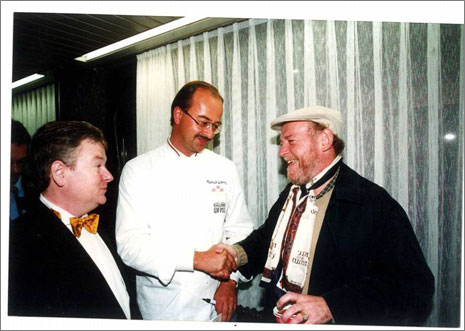 PEZ: Do you still spin vinyl?
PT: No, it’s all on computer; you need to be able to just press a button so that a certain song or tune plays for 30 seconds when a team goes on the attack.

Bruno and Franco for example had their Alpine horn tune and it’s easier to do that using the computer.

I do my own mixes; I often cut off quiet intros so the song works better in a six.

At Berlin they have live bands too, we’ve had Right Said Fred performing – their song ‘Stand Up For The Champions’ is a perfect fit for six day racing.

It’s easier for me if it’s ‘national’ teams – if it’s an Aussie team going for it then I’ll play ‘Waltzing Matilda.’

That tune got me into trouble when I was working at the Worlds in Stuttgart, I was told it was the Australian national anthem, but when we played it the Aussies were saying; ‘no, no!’

PEZ: What’s your favourite music?
PT: I haven’t got one, I’ve been in the business since the 80’s; my stations play rock, mostly.

I’m a television man when I get home, music is my job. 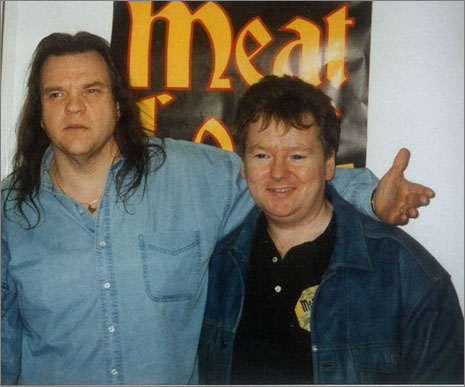 PEZ: Are you always on the lookout for ‘six day songs?’
PT: Oh yeah, if I hear something that I think will work, I write down the title, buy it and mix it.

PEZ: Do you follow the results of the sixes, even if you’re not working them?
PT: I know all the riders, so yes, I do.

I keep an eye on the new guys that are up and coming and I’ll visit them when I’m at the races I’m working.

Bruno Risi is a friend; the sixes are like a circus and I feel that it’s my job to help make them better.

PEZ: Who’s your current favourite rider?
PT: Robert Bartko, I think he’s getting better as he gets older. 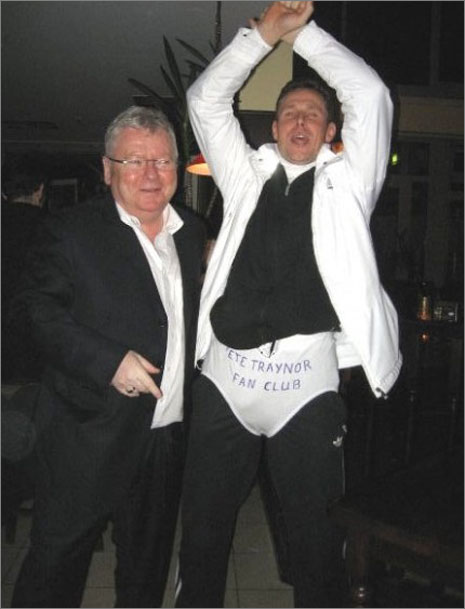 Bartko and Peter after a couple of beers.

PEZ: What about that picture of Robert with the Pete Traynor pants on?
PT: I have a friend, Nick, him and his wife always used to come to Bremen – I actually used to work from the stage there, but I don’t like that, I don’t want to in the public eye, I’m a sport DJ with a job to do.

But anyway, Di, Nick’s wife had ‘official fan club knickers’ made for me and Robert decided to try them on – that was actually at Berlin and we’d all maybe had a ‘one or two drinks!’

PEZ: How do you account for the decline in the German six days?
PT: The people who run the races can’t work together – they have to be promoted as a team effort.

All sports have associations which promote team work – but in the six days, the organisers only think about number one.

And there’s so much choice for younger people now, the folks who used to support the sixes are getting older, you have to get the kids involved – at Bremen on Sunday you can bring the whole family for 50 Euros, that’s the type of thing you have to do to get the youngsters involved.

But look at Berlin – it sells out right away for Friday and Saturday. 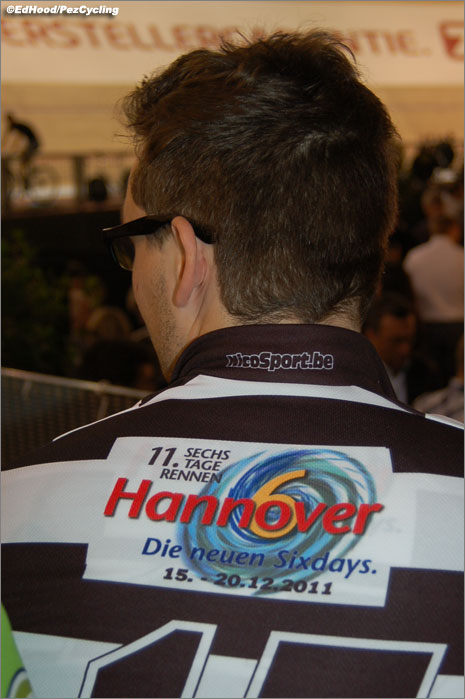 Get ready for the Hannover Six!

PEZ: And what about the new six days we’ve been hearing about?
PT: Hannover is a definite and I’ll be there and Cologne – they just need to ask me!

PEZ On The Scene: Twenty3c-Orbea Team