Another rider we met at the Saunier Duval – Prodir training camp was Constantino Zaballo. Going into his fifth year as a pro, and having won a stage of the ’04 Vuelta, Tino Zaballa has fine-tuned his goals for 2005. He’s ready to go for the big time – but unlike a lot of other Spanish riders what he considers the “big time” isn’t a stage race, but the Northern Classics.

While Zaballa is perhaps not the most well-known Spanish rider amongst us English-speakers, we got the sense he’ll be one to watch. He’s 26 years old, been a pro for four years, started competitive cycling only eight years ago, and before that did track and field. He’s from Cantabria in the northern part of Spain where the team is based. 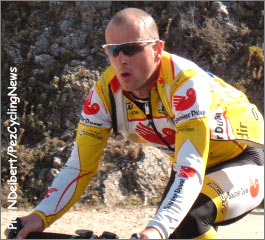 ND: So, what are your goals for this year? Are you thinking about more than just the Vuelta or are you concentrating on stage wins?

TZ: No, I’m planning to have my first peak in April, with the idea of doing well in the Vuelta a Paнs Vasco, Flanders, Liege, Amstel and the other races of the ex-World Cup series in general. In April, I hope to be going 100%. My objective for this year is definitely the classics and I’m really excited about riding Flanders again. I did it my first year as a pro and I really think it is a race in which I can be at the front. After the spring classics, I’ll take a rest and then get ready to go to the Tour with the idea of trying to win a stage and finish in the best form possible to carry over to the Vuelta. It’s clear though that my first objectives are Paнs Vasco and the classics.

ND: You talk a lot about the classics. Is that what excites you the most or are you also thinking about the grand tours?

TZ: The classics are the next step. I think the biggest success that I can obtain lays in the classics. My achievements in stage races haven’t been in the general classification but rather in winning stages and always trying to get into breaks. In stage races, I look for five or six stages that fit my style and then concentrate on winning those days or at least being a protagonist. I try to look at those five or six days within a stage race as being a bunch of one-day races. I think that my characteristics and capacity to suffer fit the effort required to win one-day races and therefore it is easier for me to get results. In addition, up until now I’ve wanted to learn as much as possible because I think that the best part of cycling is the classics. Over the last few years, my race calendar has improved and I’ve gained experience therefore I think I’m ready, physically and mentally, to be up front in the important races. 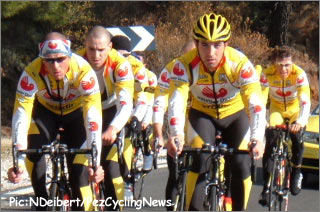 ND: So are you excited then to be racing the classics with Tafi?

TZ: Yes, the truth is I think having him in the team is great. It gives us [the young riders] someone to look up to, someone to look at and think when looking in the mirror, that’s what I want to do. I think that if I don’t have the chance, or he is going better in Flanders that I’ll do whatever is necessary to help him win. I’m going to try to learn as much as possible from him while he’s with the team.

TZ: I think that the “chip” [as if we were computers] of the young riders to think this way in respect to the classics is changing thanks the clear push of riders like Oscar Freire, who is easily identified for his success. Although, we understand it’s difficult because they are difficult races and if a Spaniard wins even though he isn’t in a Spanish team, it has a big compensation and therefore we [the Spanish riders] are starting to look to do something big in the classics. It’s also possible that with the ProTour the mentality will have to change. Even though they are Spanish teams they will have riders that are capable of performing in the classics and in the grand tours, and I think that in this aspect we will see a wide range of riders that will be of interest not only for Spanish teams but for foreign teams too. 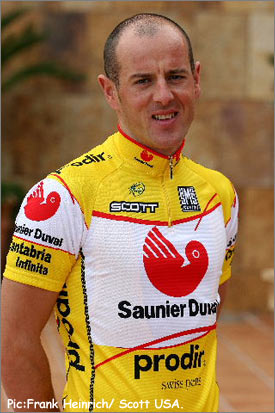 ND: How did you get this desire to race the classics? Who is the pro that you admire most?

TZ: In recent history, I admire Freire for what he’s accomplished and he’s from Cantabria like me. I was able to work with him in Verona to help him to win his third world championship as part of the Spanish national team. Oscar is also the type of rider that if he puts his mind to it and wants to win a particular race he is capable of doing so. Going further back, a rider that shaped my growth was Jalabert. He was capable of winning a small tour or a classic and it’s unfortunate that due to the specialization which cycling is going through we probably won’t see another rider like this, except for maybe Valverde. Valverde is concentrating on the grand tours now but I know him well and the day he changes his “chip” [again as if we were computers] and decides to dedicate himself to one-day races he will shine for sure. Last year when I signed with this team, we decided to focus on the Spanish race calendar and not worry about the classics in order to obtain the maximum results for such a young team. This year we’re more at ease because we’ve passed the tests of the small tours and now we want to focus on the big ones [important races in general]. It’s something for me that for years, I’ve been thinking about, and like anything else, to get somewhere you first have to pass certain phases. I think I’ve now passed the other phases and it is the time to try to pass the test of the classics.

So, it appears that Zaballa is part of the new breed of Spanish cyclists, along with Freire and Astarloa, who are breaking the mold of being just stage races and climbers. Maybe with some more success and thanks to the visibility these races will in gain in Spain due to the ProTour we’ll be talking about more Spanish riders in the northern classics in the future. I would just like to thank Zaballa for taking the time to speak with us at PEZ and wish him good luck on a hopefully successful season.

Optimal Cadence: What’s Right for You?