Tom Peterson is a quiet guy from North Bend near Seattle, he won a stage in the Tour of California in 2009 and has ridden the Vuelta a Espaсa twice and the Giro d’Italia and has been a trusted domestique since he turned Pro with TIAA-CREF in 2006. He moved on to Garmin-Sharp and now will be a Grand Tour specialist at Argos-Shimano. We caught up with him at the Dutch WorldTour teams’ presentation in Spain.

PEZ: So, Tom what are you looking forward to this season?

Tom Peterson: The goal of the team is to get the best out of the riders and I want to make myself the best rider I can be through the season. I think the team’s pitch is actually perfect for a team that has a bright future and I want to be part of the team and help the team. 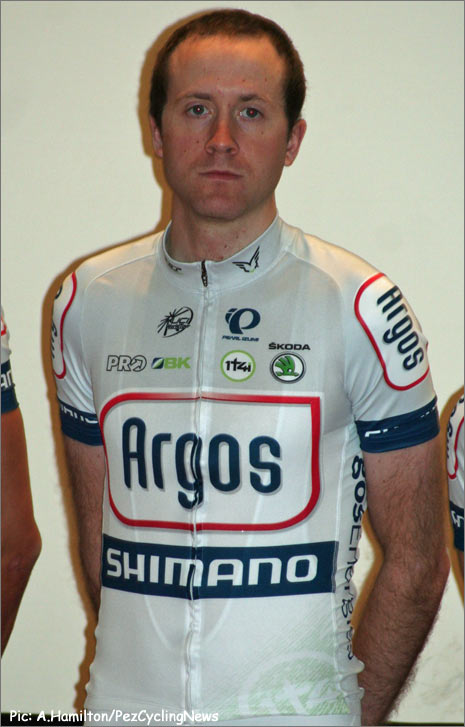 He may not look it from the photo but Tom is excited to join his new team at Argos-Shimano.

PEZ: Do you know what your programme will be yet?

Tom: I know a Little bit of it, I start in France with Marseillaise and Bessиges, then some smaller races in February in France and then I do the Strade Bianche in Italy and stay there to ride some more Italian races, I’ve got them all written down and I know what it is and when it is. After that I go to Volta a Catalunya, then back to France before the Paнs Basque, then a small period for recovery and then the Giro. 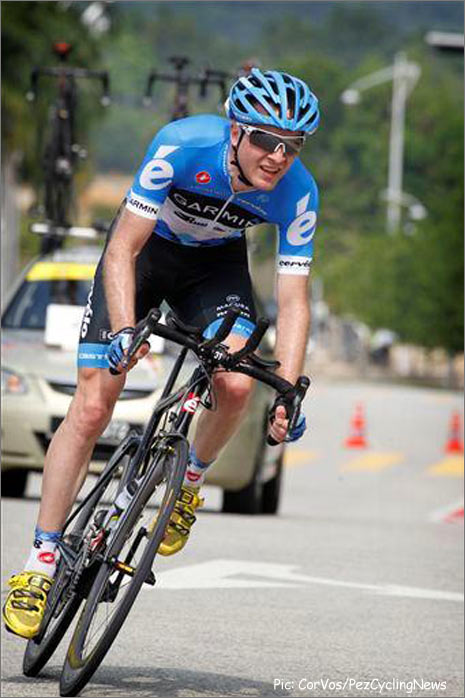 PEZ: Are you looking forward to the Giro d’Italia?

Tom: I’ve ridden the Vuelta twice and Giro once already while I was with Garmin.

PEZ: What did you think of last year’s Vuelta a Espaсa?

Tom: Last year in the Vuelta I didn’t have my legs and I ended up going for breakaways and I had some bad luck, I got into one breakaway that looked like it was going to go and, well it went, but it was a big breakaway and some of the guys worked on the downhill and it split and I was in the back.

PEZ: What did you think of the final week?

Tom: The last week I was better, I made the breakaway on the second last day, the one up that Bola del Mundo [finished 17th on stage 20-Ed.]. Yea that was good, I was happy that at least I did something. The whole race was hard. I heard that this year is going to have eleven mountain top finishes, that’s going to mean pain!

PEZ: Do you think you will do Giro/Vuelta this year?

Tom: No, I think I’ll be doing Giro/Tour, I’ve been promised that. 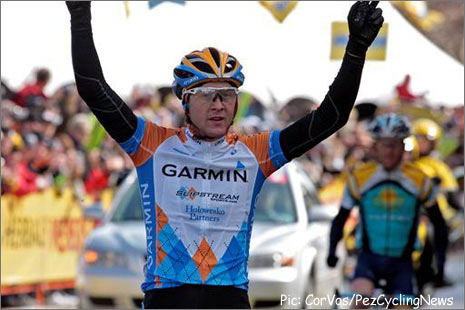 Taking the win in California ahead of Levi Leipheimer.

PEZ: What is the ultimate aim of your career?

Tom: I want to win some stages of WorldTour races, ideally stages of Grand Tours or ride for the GC in one of the Grand Tours, I’d like to do that. The first Grand Tour I did, the Vuelta, we were riding for Tyler (Farrar) and I was covering the breakaways and in the end finished 27th (overall). So, for me, that showed that I can ride for GC, maybe not as a champion, but maybe as a contender with an option to be high on GC through a breakaway or something, but I’d probably need a breakaway to get the time on one of the hard days.

Tom: Yea, I would like to ride races like those, but they are hard for me, I still have quite a bit of difficulty in one day races, I don’t really have it until I’m in a stage race, but I would definitely like to do well in Liege, just to make it in the front group would be enough for me.

PEZ: Are there any other Classics that would interest you?

Tom: Yea, San Sebastian is a nice race, hard races like that would be fine, it’s got to have some up’s and down’s. I’m just not interested in the cobbles.

PEZ: Do you get back to Seattle very often?

Tom: In the off season I always go back. I’m based in Girona during the season, it’s a good area.

PEZ: That’s just up the road, (the other side of Barcelona) how does the training compare in that area to here?

Tom: It’s different yea, it’s a lot more rugged, its better up in the mountains than down at the sea with all the tourism stuff down there, but no its good, great climbing, great weather, its perfect for training. 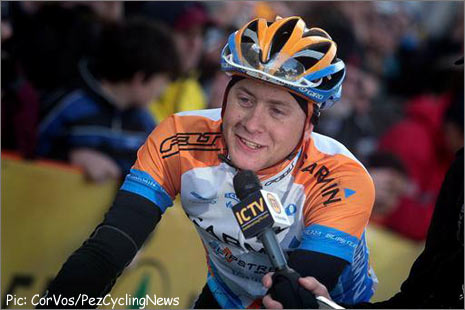 PEZ: Does Gerona have a good group for training and are there other Americans?

Tom: Yea there are some other Americans there, there is starting to be more Dutch, but there is a good group over there.

PEZ: What training are you doing at the moment?

Tom: Some intensity and putting in more hours, just trying to build up really. I’m really on track for this time of year.

PEZ: Have you noticed any differences between Garmin and Argos-Shimano?

Tom: I think they are very similar in their philosophies, how they approach things. We are all from a new generation and we are all from a different generation here and that’s one of most important differences between this team and other teams. These guys are all from the new generation and we are all embracing the concept of a clean sport and it’s maybe naive, but it’s real, these guys have never seen it, they don’t know anything about it and that’s what we are building on and that’s the philosophy. You could ask the questions, but they wouldn’t have anything to say because they can only talk about what they know, which is nothing.

PEZ: Coming from a mostly American team (Garmin) to a Dutch team (Argos), has that posed any problems?

Tom: No, the language here is English. The conversation amongst the Dutch riders is in Dutch and the Germans speak German to each other and the French. But in general everyone speaks English and are happy to do it.

PEZ: You have an Australian, a South African and you speaking English.

Tom: And Luka Mezgec, the Slovenian guy, he speaks only English and Slovenian, but he could speak Slovenian if he had anyone to speak it to. The Nationalities that are the same do tend to stick together a little, but we all branch out and they are all friendly guys.

PEZ: What do you think of Lance Armstrong going on Oprah Winfrey?

Tom: I think it’s awesome, I’ve never been on Oprah so I wouldn’t know what it would be like, but I think it will be an interesting thing to watch. She’s one of the biggest personalities in the World, so obviously it will be interesting to watch, I would watch it if I could, maybe on internet. It should be because it’s not a cable thing in the US.

PEZ: I suggested that it would be better on Jerry Springer.

Tom: Oprah will do a good job I think, she is usually open to that sort of thing, everyday lives, how people handle relationships and stuff like that, so it’s not that different from Jerry Springer, it’s a pretty similar thing. There are no body guards, but I don’t think she holds anyone back if they want to!

I didn’t know as much about Tom as I should have done before the interview, but he can climb and he knows which breaks to get into, with a bit of luck he should be up there on GC in one of the Grand Tours this year. Watch out for him at the Giro and the Tour.