Interview: One thing that’s stood out for me in recent months has been the resurgence of steel as a frame material for road bikes.  In this age of fancy tube shapes, top secret carbon layups and resin recipes, it’s easy to forget the best material to build a bike frame that’s durable, comfortable, customizable & inexpensive… is steel. One man who was key to the modernization of building steel bike frames is legendary Tom Ritchey… who talked with me about his Road Logic steel frameset and how steel evolved as the best bike material around.

I just realized this is the time to talk about steel in a real historical and valued perspective about why it does what it does.
– Tom Ritchey

A little background from my side – the first good mountain bike I owned was a Ritchey Montare in about 1982….  One of the red ones – so I’m an early adopter of the brand from way back.  I also owned a couple steel road bikes before aluminum showed up, and then got completely swamped by carbon.  My favorite was a Pinarello Montello  – cherry red – that carried me on a lot of great rides back when my legs never seemed to get tired.  But it also puts me at the age where I can remember what it was like to ride steel – and remember how it felt different from every other material used to build frames. 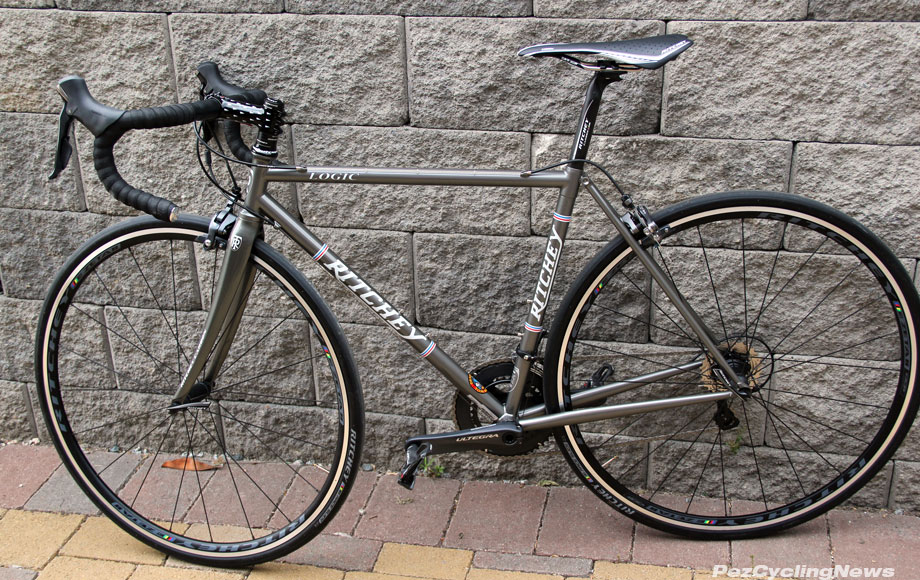 The Logic: steel frame in all its glory, as Tom intended.

The Ritchey Logic is the first steel road bike I’ve ridden in probably 20 years, and after a few months on the bike now, I was keen to talk to Tom about this so called resurgence in steel frames.

I’ve transcribed most of our conversation verbatim, as the dialogue it adds a level of authenticity to to the story. – Pez

PEZ: We want to talk about your the RITCHEY Superlogic Steel road bike.

PEZ: See we’re already learning things. (laughter) What inspired you to come back to steel for the road?

T:  Starting out in the early days, everything was measured against steel and I come from that foundation that was built for 80 years up until that that time.  The thing that most people don’t realize is that for the years leading up to the 70’s , nothing had changed.  A steel bike was almost no different in terms of tubing diameter, lug construction and including geometry since the first of the century.

I remember going to Columbus in the 80’s and them showing me a printout of a tube test report for Columbus SL tubing – the gauges were there and it was 1899. The heat treatment- everything was the same.  No one had come up with any improvement until the 70’s. 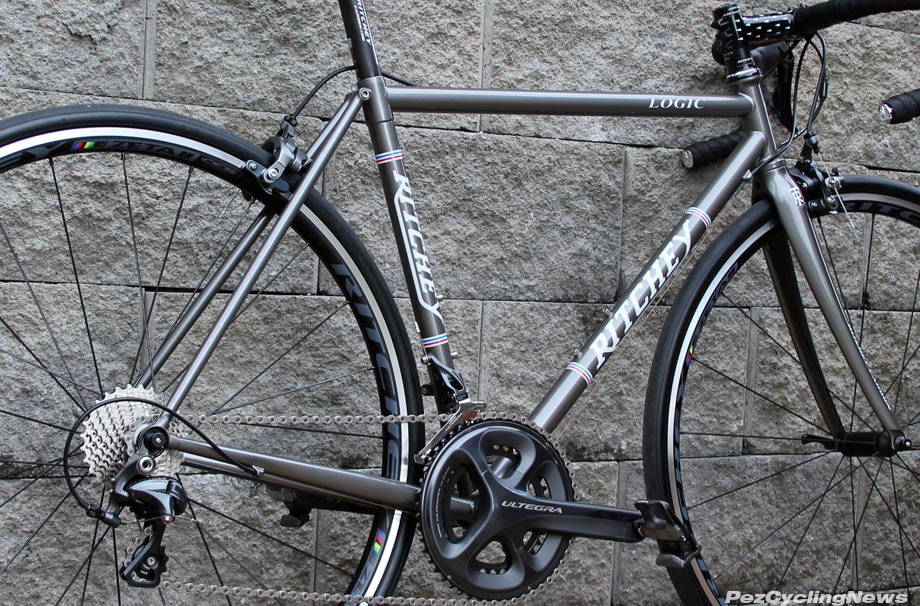 So the value in the material was so intrinsic that it was hard to think of something better.  And I came into the party when no one had innovated because innovation was at such a high level.  And that was also the opinion of other people around me like my father and Spence Wolf, and people that I really respected in the racing world.

So fast forward 40 years [to now] and no one really understands steel. They guess at it – why does it feel this way – why is it now that I ride this bike and I’ve been missing this?  All these things that are very easy answers for me.  How things have complicated the choice of the rider to a point where they really don’t know why a bike feels a certain way.

I just realized this is the time to talk about steel in a real historical and valued perspective about why it does what it does. 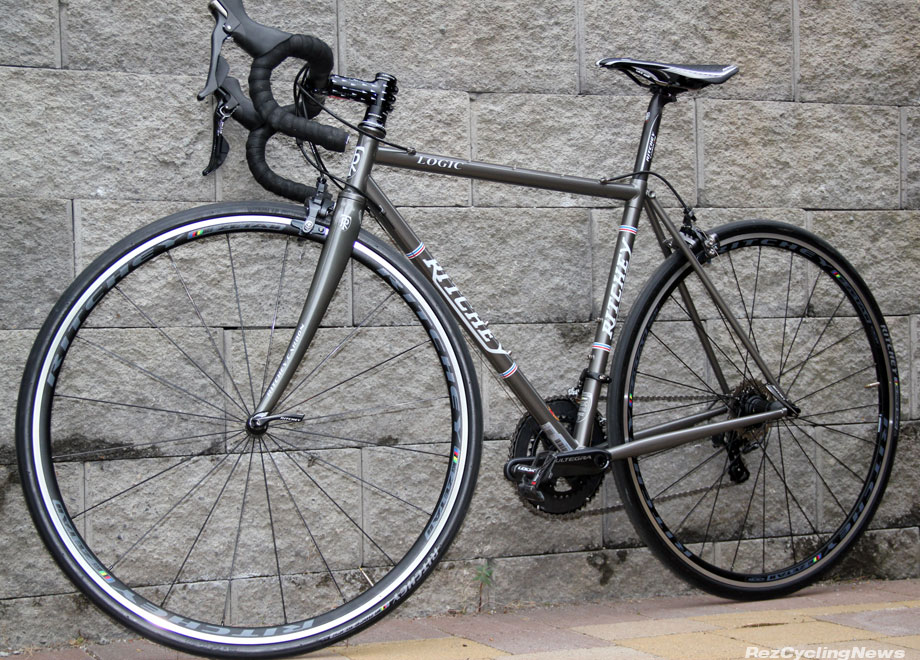 So when you see 10 years of carbon development and then everyone switches back to a 27.2 diameter seat post and why – it tells the story of steel.  All the rigidity that’s been put into the frame at the expense of comfort and the wheels have resulted in only one area where they can find comfort.  [Tom chuckles] 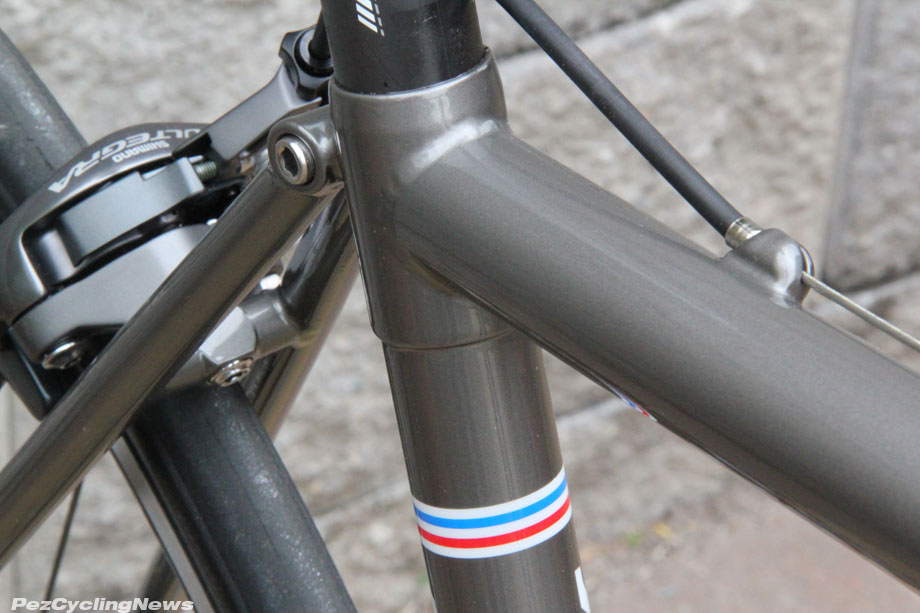 The larger diameter seatpost sleeve offers more surface to connect the top tube, and a more stable junction with the seat stays.

And that’s going back to a conventional 27.2 seat post that goes into a steel frame.  And there’s a lot of irony about that – like why it takes all these marketing reasons and the pursuit of stiffness without weight, without comfort and all these other things and then you can go reverse engineer why the steel bike was so ideal then and why it is now.

Steel hasn’t just slept in a dusty garage for 40 years
There are some new steels and new ways of fabricating some steels and new ways of playing with steel than I had access to back in the early days of Logic tubing… that I got shortchanged when the market shifted to aluminium and carbon.  The bottom fell out of the steel market and I went in the component direction and have lived there for all these years.

R: What are the ride qualities you intended for this bike?

T: First of all there’s not a lot of difference between this and the Classic. The Classic was the last series of steel bikes that I built before really getting into the mountain bike.  Steel was based on lugs and all lug construction was based on almost a blowtorch on a heat affected area and as soon as lugless rang a bell in my head I realized that tubing needed to change.

And so the design of tubing that Columbus had shown me back in the 80s was the same length of butting, length of tapers, length of c-section based on heat affected zones that were very long and using high temperatures and mass production types of manufacturing, and so the Logic was when I designed a completely new type of tubing. 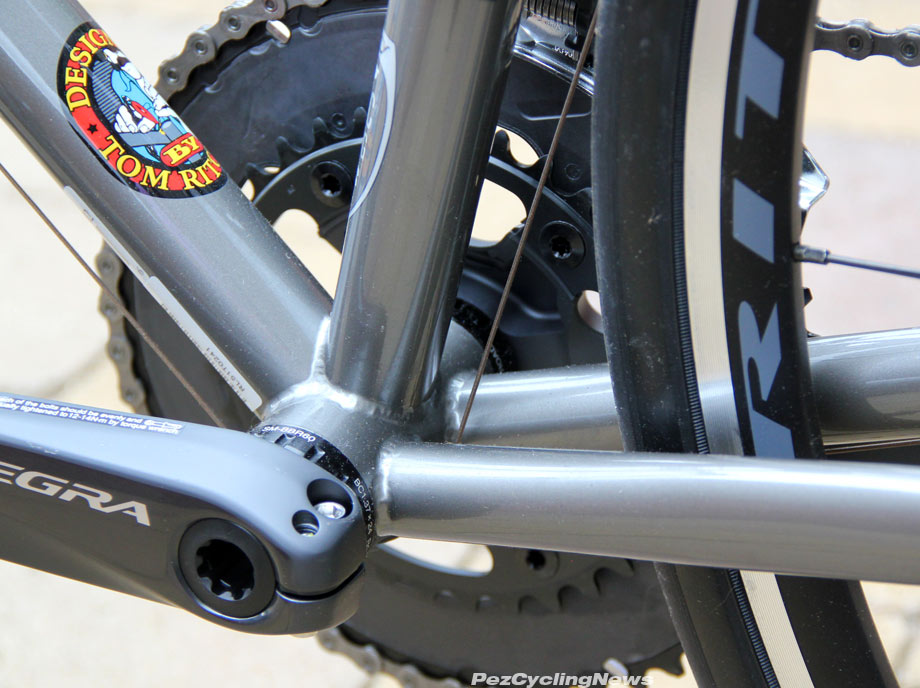 The internally butted tubes add strength at the joints, and compliance and weight reduction in the middle.  I asked for a cutaway diagram but Ritchey wouldn’t give up their trade secret.

It makes perfect sense now, but no one had ever played with the taper length so the front end absorbed the energy differently… To shorten the length of the butting for tig welding or fillet brazing and then increase the thin sections so you had a lighter tube overall. All those things add up to the overall energy absorption quality and ride quality of a frame.

And that’s what you’re looking for when carrying a 170 lb rider over many different kinds of road surfaces. 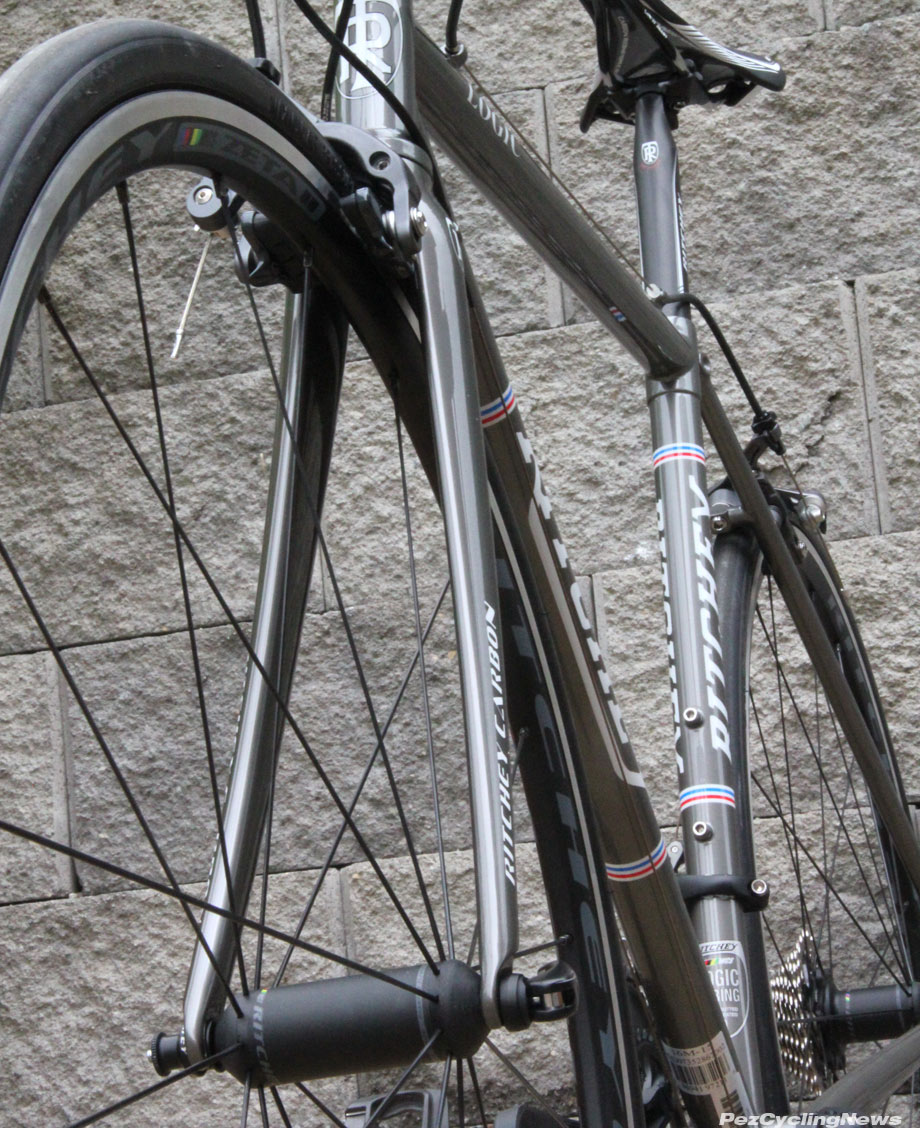 The fork is Ritchey’s own design – but in carbon, and offers a nice compliment to the feel of the frame.

Design wise, the fork has to be a certain amount of stiffness in a lateral plane, and the downtube has to have a certain diameter for torsional strength and the chainstay has to carry through but everything else has to be as much of a rubber band as possible.

On Energy Absorption & Ride Quality
I look at a steel frame, and springs are made out of steel – on optimum spring is something that absorbs energy and releases energy.

Saddle is their WCS Streem –  Titanium saddle rails are hollow to be lighter and stronger.

And to just kind of dismiss it as something that nails are made out of, or railroad tracks are made out of is a disservice to a wonderful material.  In the world that I grew up in, practically every bike was a custom bike so the idea of an affordable choice was a normal thing.

Today all these things that are clouded into these small – medium – large – extra large monolithic bikes that have sloping top tubes where you can’t even really measure true lengths and get a perfect fit. 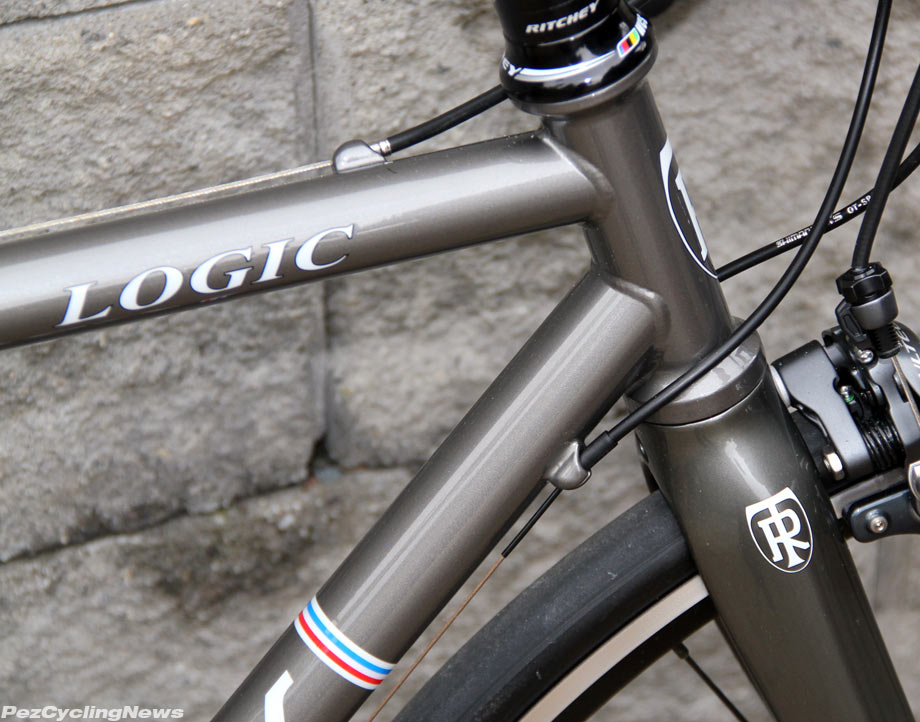 The headtube runs 1.125 inch bearings, and the headset is Ritchey WCS of course.  The Steerer tube is straight – Ritchey says it’s perfect for the job and there ‘s no need for anything fancier.

There’s a value proposition with steel where it gives you an affordability to have a custom bike.

Ok my bikes aren’t custom, but they’re based on proven geometry that has for me represented the thousands of bikes that I’ve made, so I feel like I’m in a much closer range to fit somebody [on one of my stock bikes] than a traditional carbon bike these days.

Straight tubes and clean lines – the Ritchey Logic is as classic as they come.

PEZ Ride Notes
I’ve had this bike for a long term test that’s run about 12 months – through a variety of conditions here at PEZ HQ.  As the first steel bike I’ve ridden in 20+ years, I wasn’t quite sure what to expect, but was keen to see if the sensations of steel took me back to that magical place of my youth when I was in my physical prime.

First, like so many bikes I’ve enjoyed riding, it was easy for me to dial in the fit of their stock 51cm frame to fit my 5’8″ build.   The geometry of the 72.5 head tube angle allows for a stable and predictable steering feel, while the slightly steeper 74.5 seat tube angle positioned me more forward of the bottom bracket – which I’ve always liked.  The wheelbase of 981mm was slightly shorter than Ritchey’s Carbon Breakaway I reviewed here, and added a notable quickness to the overall handling.

Connect all this with the natural resilience of steel, and you’ve got one nicely handling, comfortable and lively bike to ride.  And even better is the price – under $3000 for the full bike with Ritchey WCS cockpit and Shimano Ultegra gruppo.

I fitted Richey’s Zeta II wheelset with their 27mm Tom Slick WCS tires. It was my first time going wider than 25mm in tires, and admit there was some hesitation involved that was mostly due to my ego. But I gotta say size does matter – at least when it comes to air volume (more is more) and tire pressure (less is more). Yes they’re more comfortable, the wider profile was notable for how sticky they felt in the corners, and I haven’t had a flat yet – and this includes riding a reasonable amount of non-paved dirt roads that I use locally to connect to various riding areas.

The bike weighs in around 18 lbs, which by today’s carbon-influenced standards sounds kinda porky – but a bottle of water weighs at least 1lb. The “extra” weight was never never noticed when riding – except where it came to that extra mass absorbing more of the road buzz, and generally creating a platform I could ride all day. 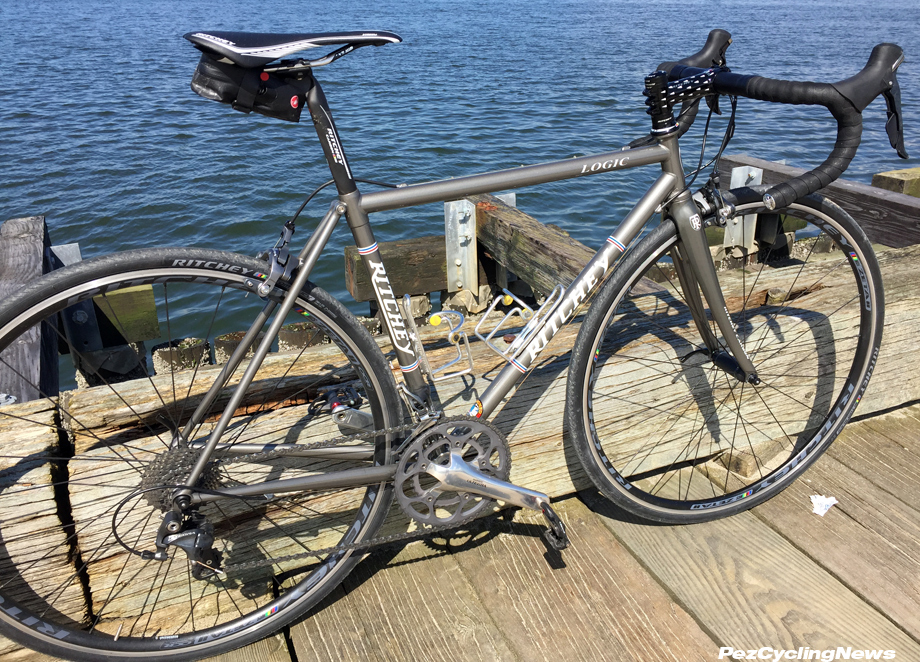 • See more at the RitcheyLogic.com