Rider Interview: If you had any interest in professional bike racing in the 70’s and 80’s you must remember a certain hard rider from the Flemish Ardennes’ village of Deftinge. If the race was tough, then Ferdi Van Den Haute was at the front. After a chance meeting at the Gent 6 Days, Ed Hood managed to set up an interview with Ferdi. 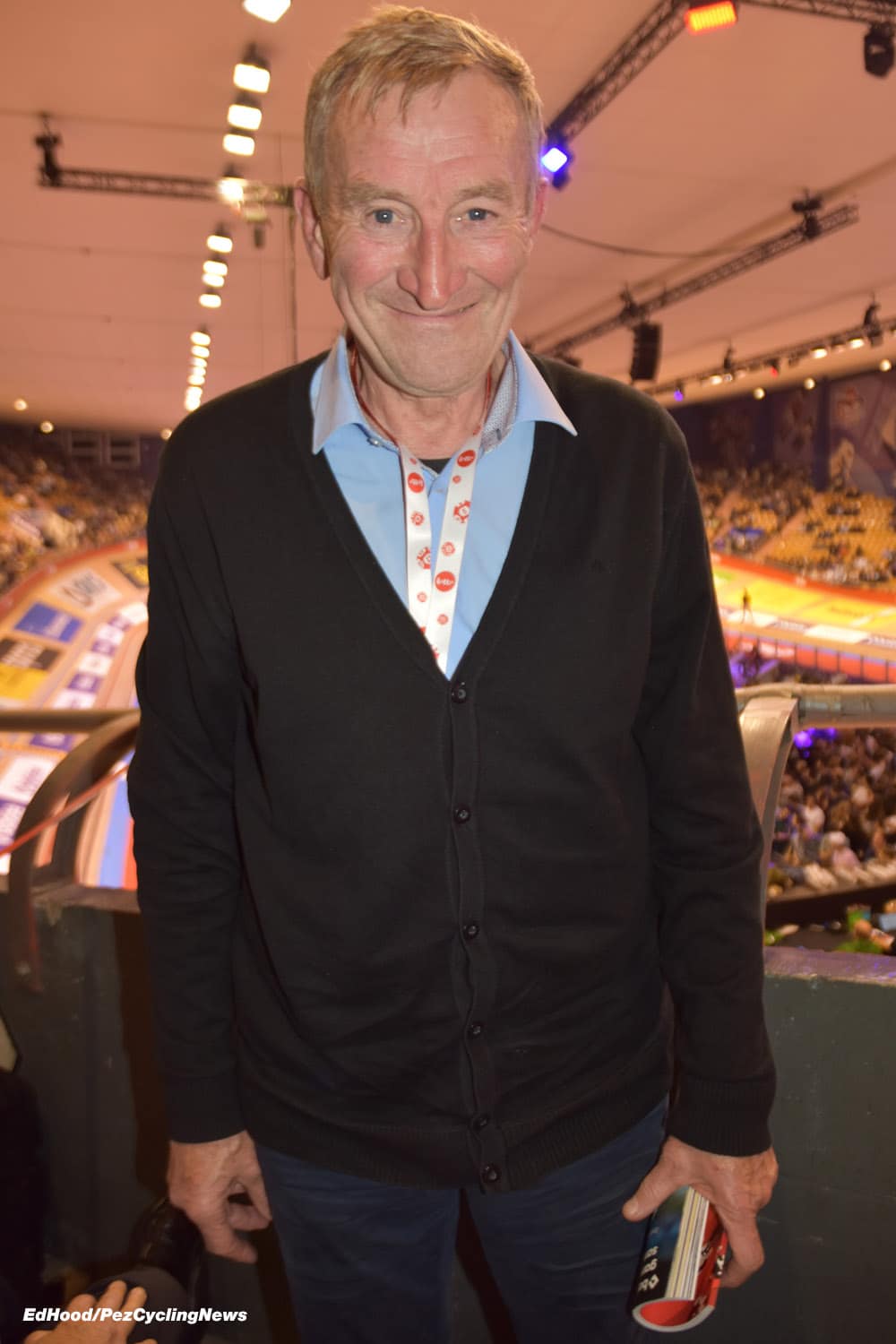 If you’ve read my ramblings from the Six Days of Gent then you’ll know that sitting in front of us in ‘t Kuipke was Belgian 70’s and 80’s star of road and track Ferdi Van Den Haute. Ferdi very kindly agreed to an interview with us but before we hear what he had to say let us take you through his career hi-lites. 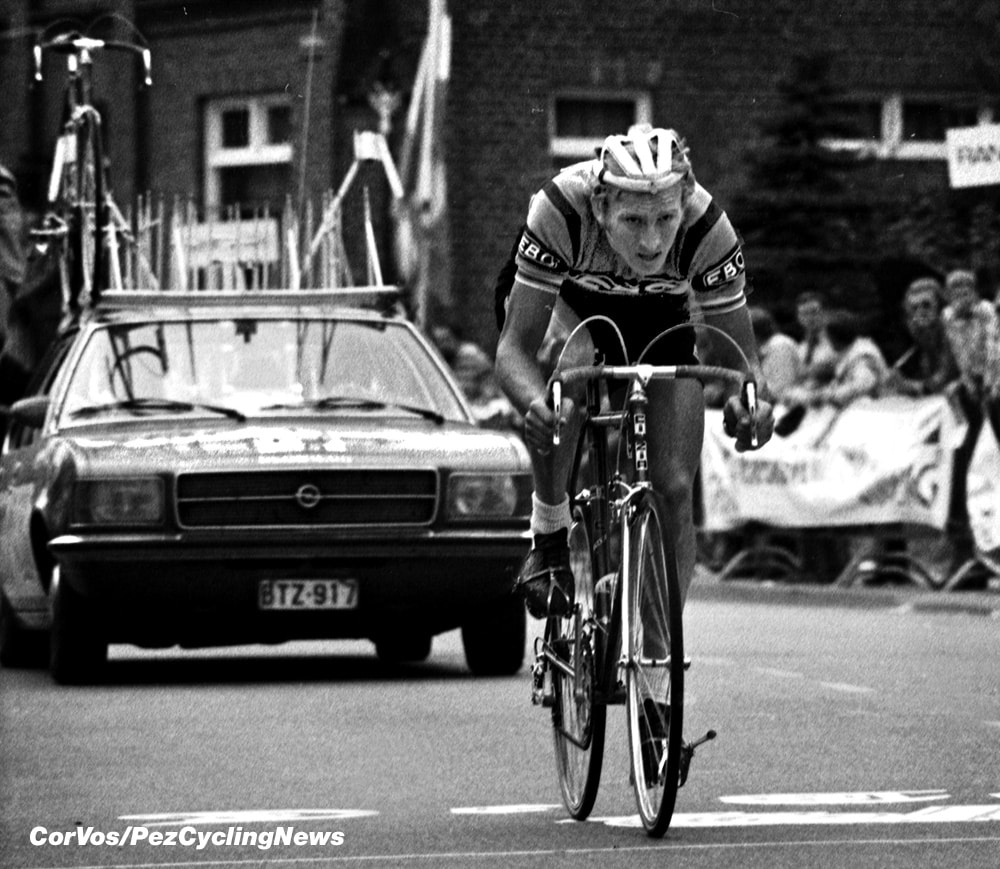 In the mid 70’s he was a prolific winner as an amateur on road and track, winning National Championships in the madison and individual pursuit. He turned pro with Ebo-Cinzia in 1976 and kicked his career off with an early stage win in the Tour of Sardinia and later in the season took the GP Lucien Van Impe. 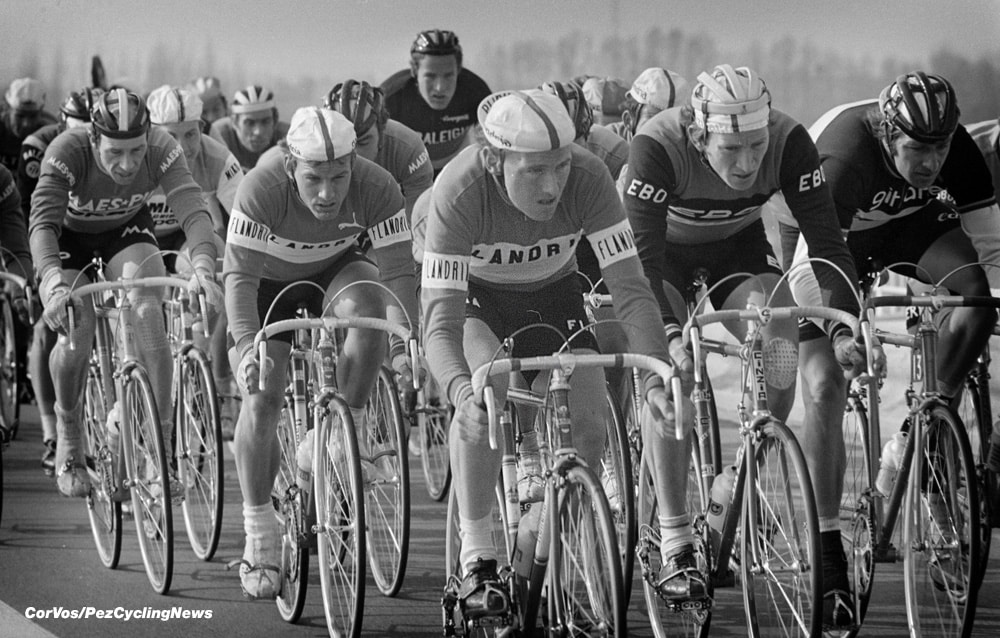 The following season saw him win the Belgian Elite Madison Championship with no less a personage than Patrick Sercu and there were numerous successes in the kermis koerses. The ’78 season saw him in the colours of Marc Zeepcentrale for arguably his best ever season with two Vuelta stage wins and overall points title as well as triumphing in Gent-Wevelegem. Still with Zeepcentrale for ’79 there were stage wins in races as diverse as the Tour of the Netherlands and Tour de l’Aude. 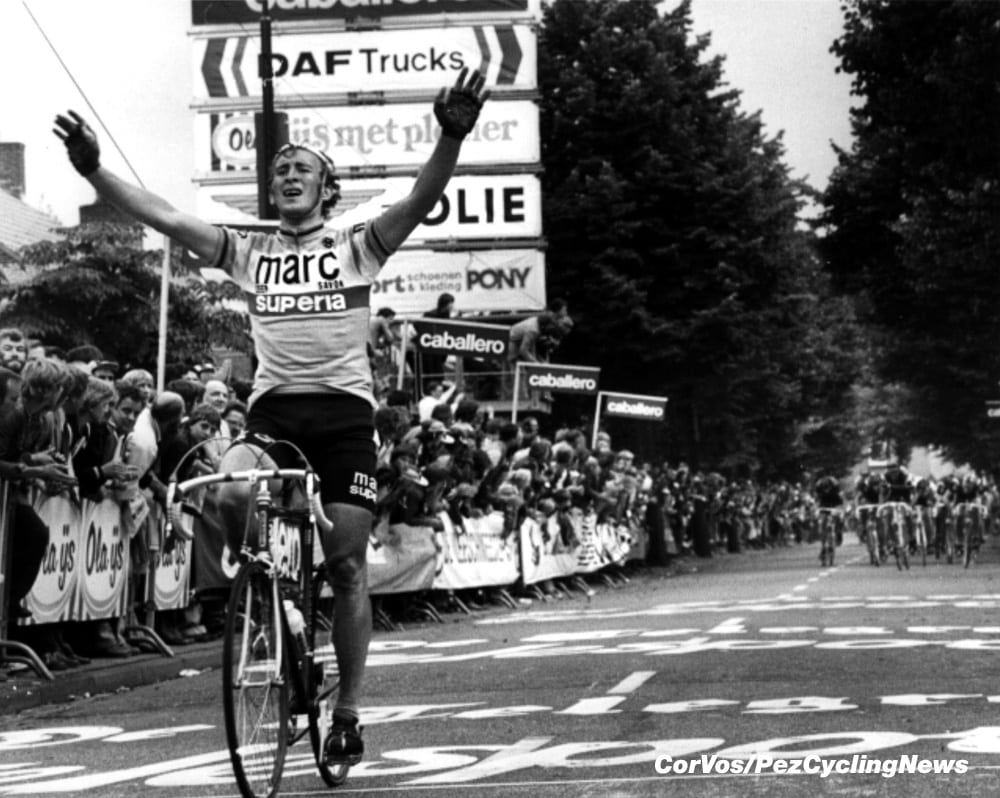 A win for Marc Zeepcentrale

In 1980 he joined the team with which he is perhaps most associated, La Redoute – a major mail order catalogue company from Northern France. Keeping his track legs in shape he won the Belgian Omnium Championship and had road success, including a stage in the Etoile des Beseges. In ’81 he won the tough Northern France semi-classic, GP Denain. The following year there were the usual kermis koers wins and fourth in the beautiful but late lamented Trofeo Baracchi two man time trial, partnered with Theo De Rooy. 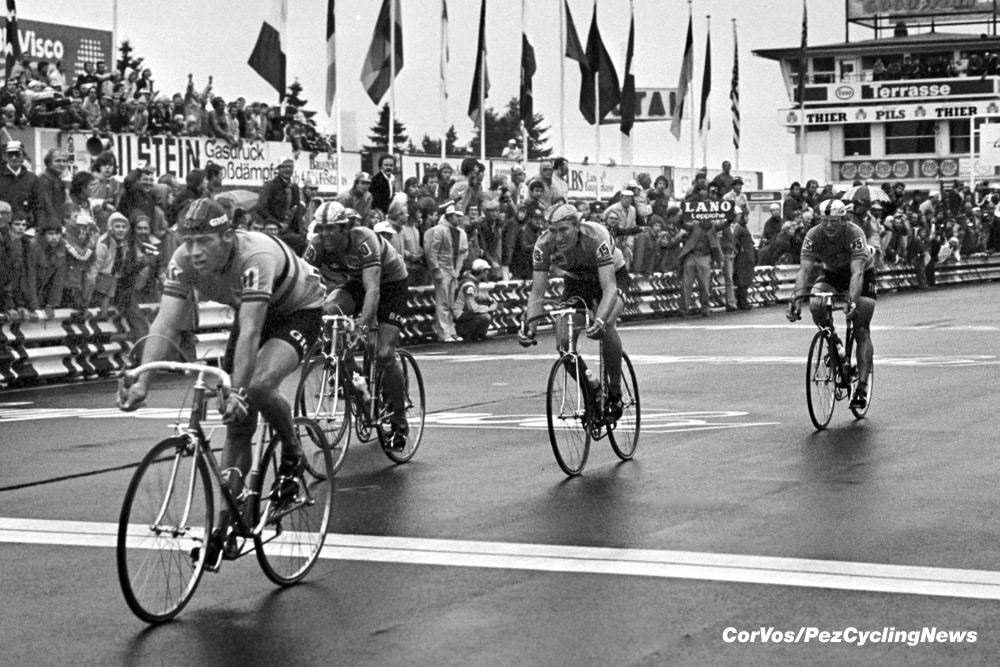 The hi-lite of season ’83 was a Paris-Nice stage win. Season 1984 saw a Tour de France stage win and another tough French semi-classic victory, the GP Fourmies. In ’85 there was another stage win in the Etoile des Beseges and the sixth of seven wins in the GP Stad Geraardsbergen where he’s all time, ‘recordman.’ With Skala Skil for ’86 he won the prologue in the Tour of Belgium and triumphed for the final time in Geraardsbergen. His last season in ‘87 saw one of his biggest successes, the always hard fought Belgian Professional Road Race Championship. 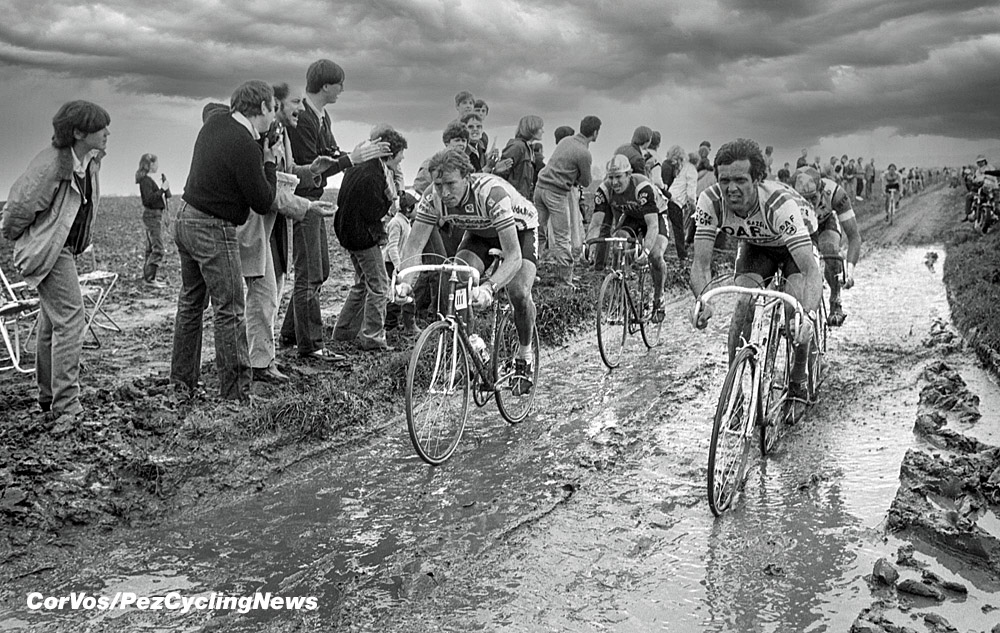 PEZ: You were a very successful amateur, tell us about that first pro contract with Ebo.
Ferdi Van Den Haute: I never had it in my head to turn professional, I had a good career as a teacher but I was approached by Mr. Ebo, who owned a meat business; he wanted to build a professional team around me. I have very good memory of my time there and I was very lucky that in only my second or third race I won a stage in the Tour of Sardinia – a great start to my career. 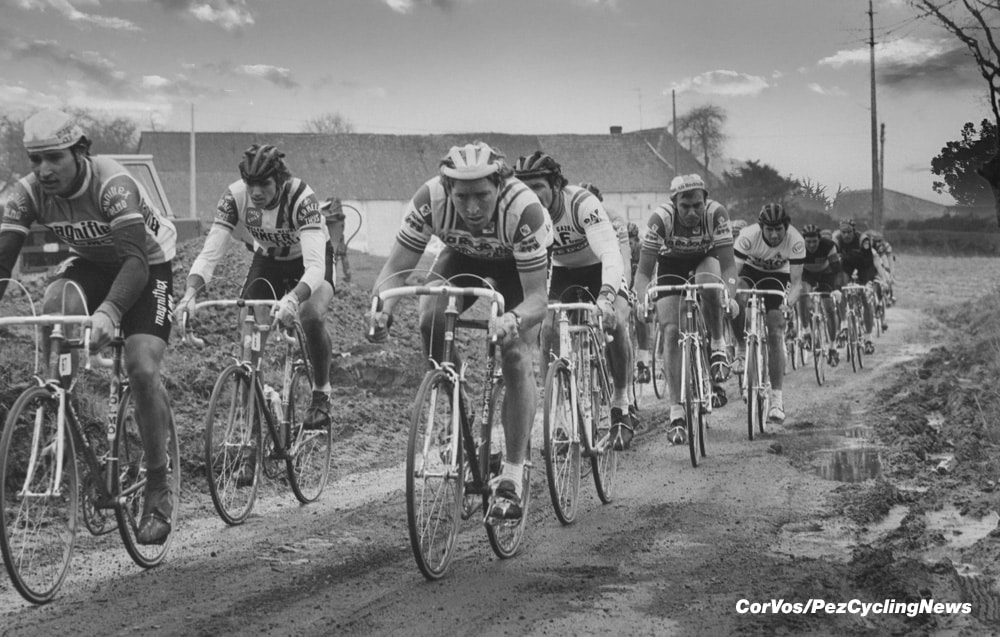 PEZ: Then you went to Zeepcentrale.
More good memories there, I won two Vuelta stages and the overall points classification with them, it was in the spring back then – and of course, I won Gent-Wevelgem with them too. 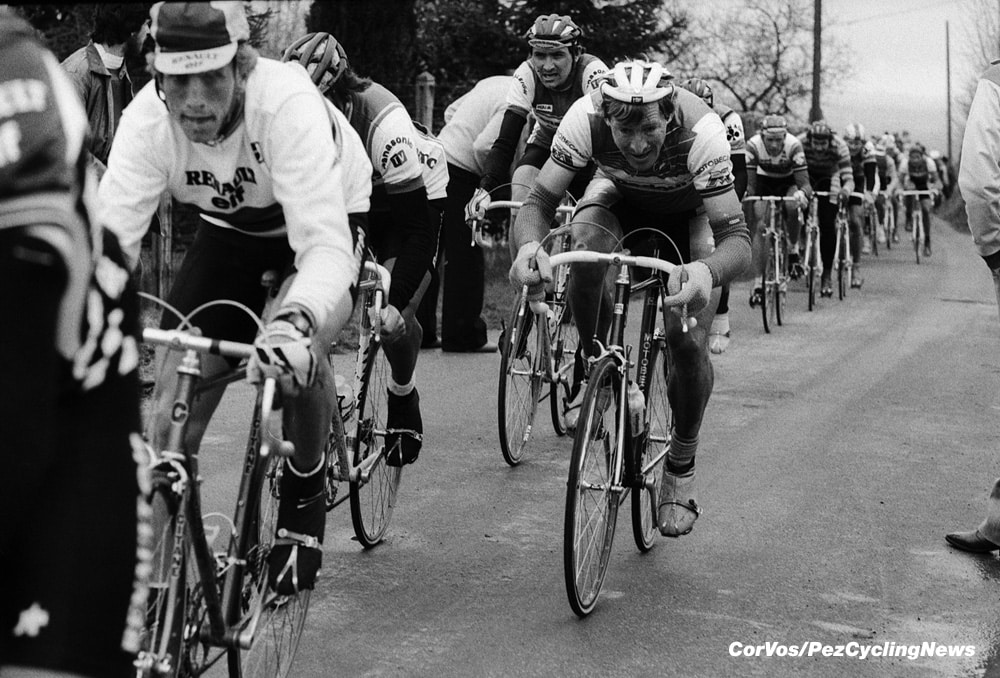 PEZ: Then the team with which perhaps you’re most closely associated – La Redoute, you were there for six seasons.
They recruited me for the Classics but because it was a French team I rode the Tour de France with them as a support rider – but it wasn’t a race I really enjoyed, I was always tired after a tough spring Classics campaign. 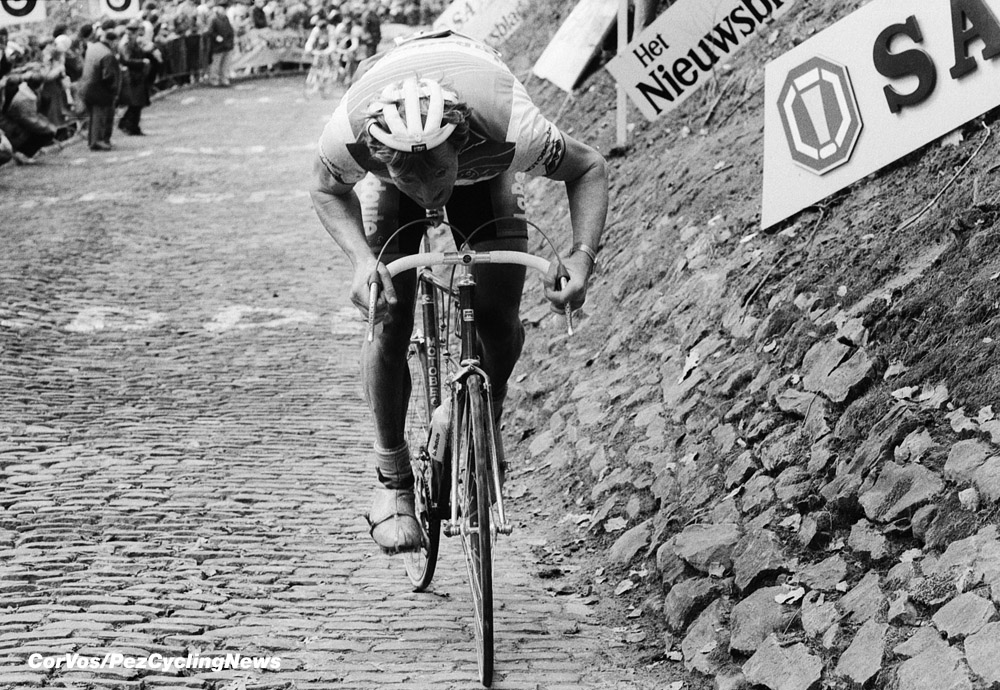 PEZ: Your biggest win, Gent-Wevelgem, beating Walter Planckaert, Francesco Moser and Jan Raas – your recollections of that day?
It was a very cold day, there was snow beside the roadside and of course, it was a very hard race over 246 kilometres that year – I got clear on my own with 15 or 16 kilometres to go and won by a minute from Planckaert. 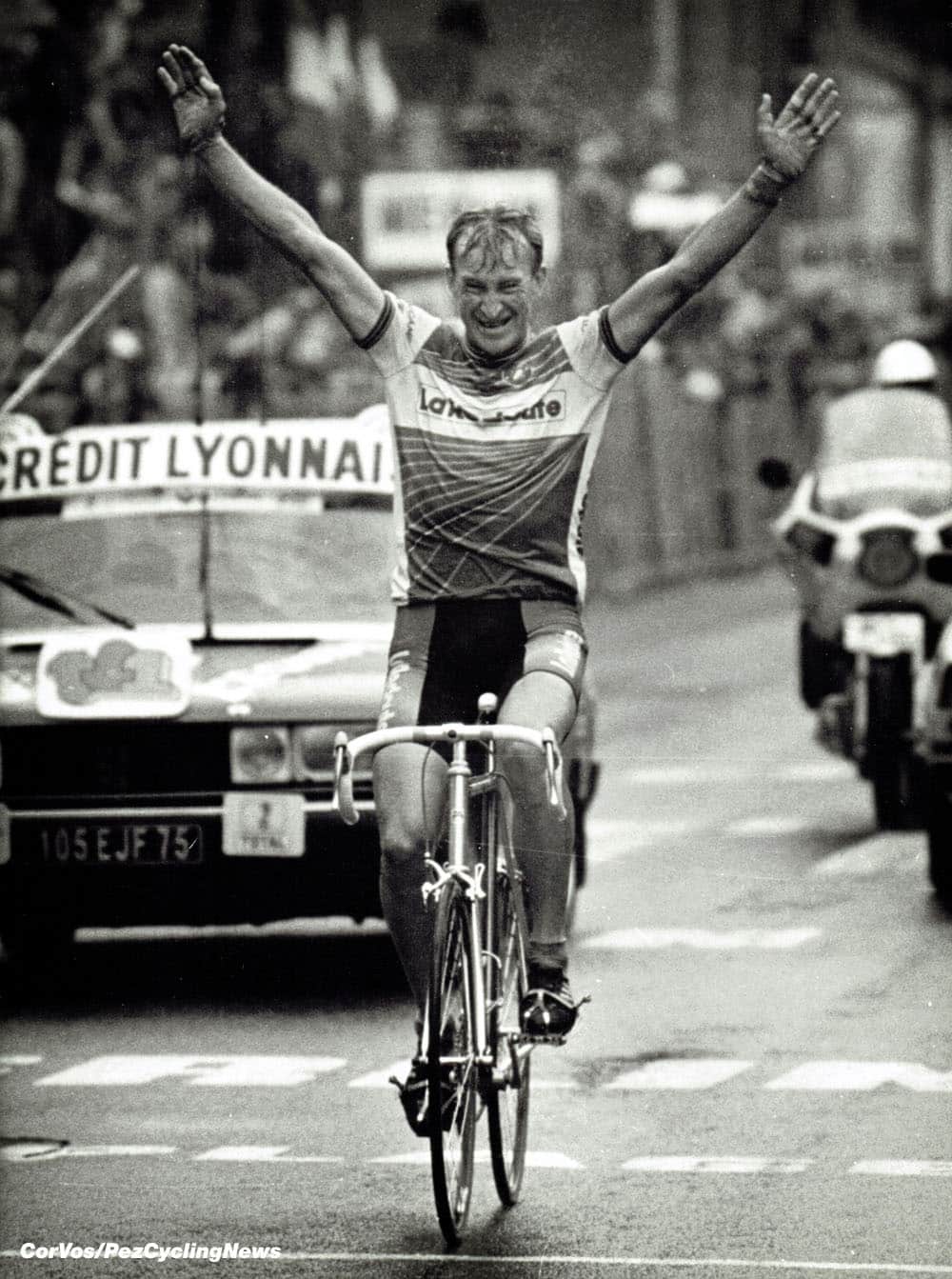 PEZ: The GP Denain and GP Fourmies are always hard races to win.
FVDH: Those races came at times of the year which suited me and were important races for a French sponsor. 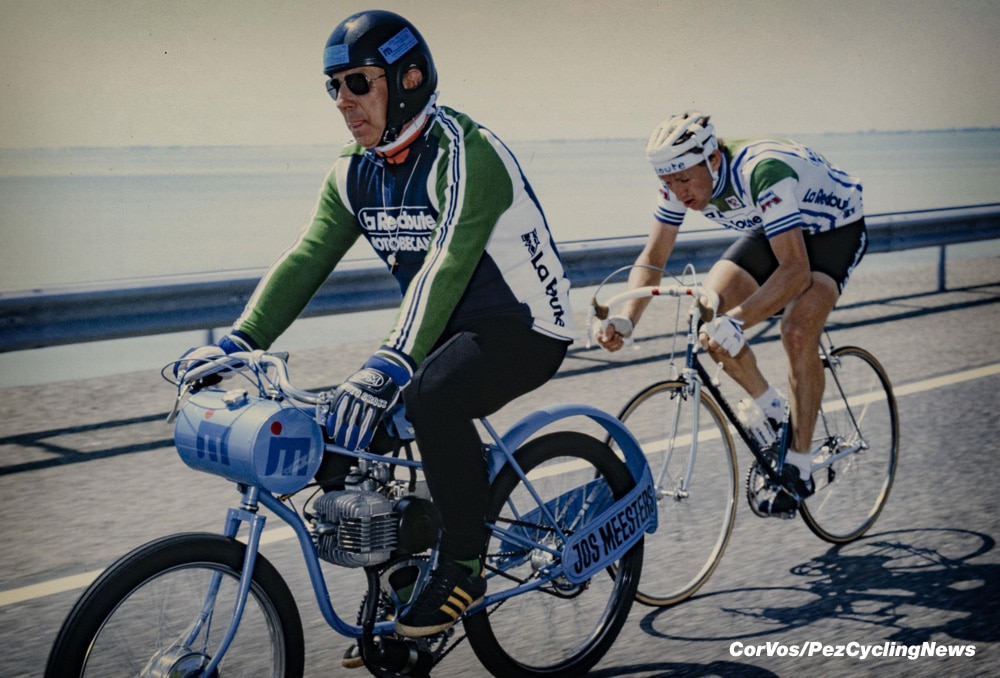 PEZ: You had two notable ‘near misses,’ in 1981, second in Bordeaux-Paris and Paris-Tours, any ‘with hindsights?’
No, in Bordeaux-Paris I was beaten by Herman Van Springel, he was known as ‘Monsieur Paris-Bordeaux;’ he won that race seven times – so he wasn’t easy to beat there! Whilst in the 1981 Blois-Chaville, as Paris-Tours was at that time, I was beaten by Jan Raas – he was pretty fast at the finish. 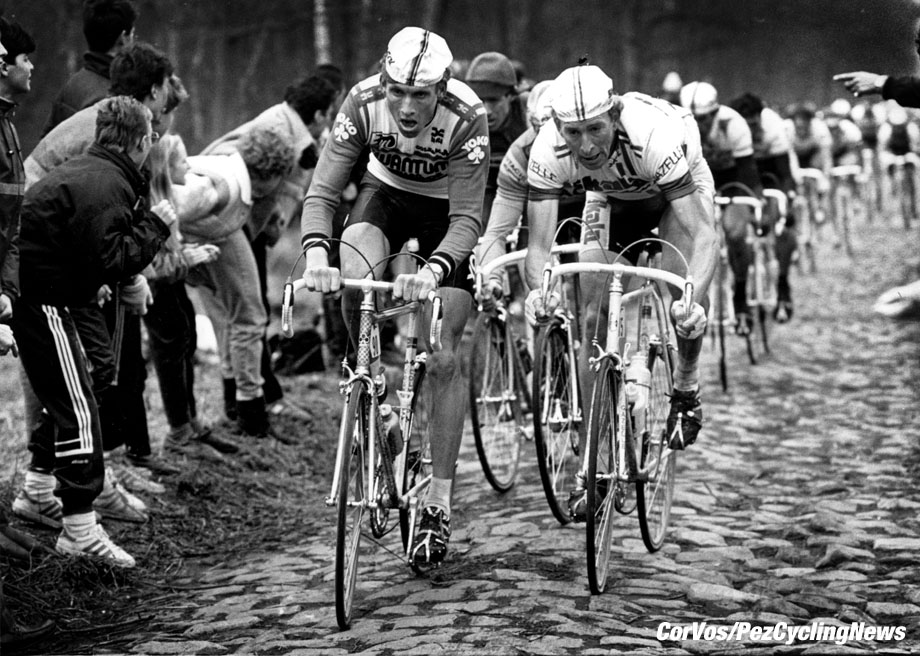 PEZ: You won the Belgian Professional Championships in 1987 but that was your last season?
When I turned pro I decided that I would do 12 seasons and that would be enough, I only wore the jersey for six months. 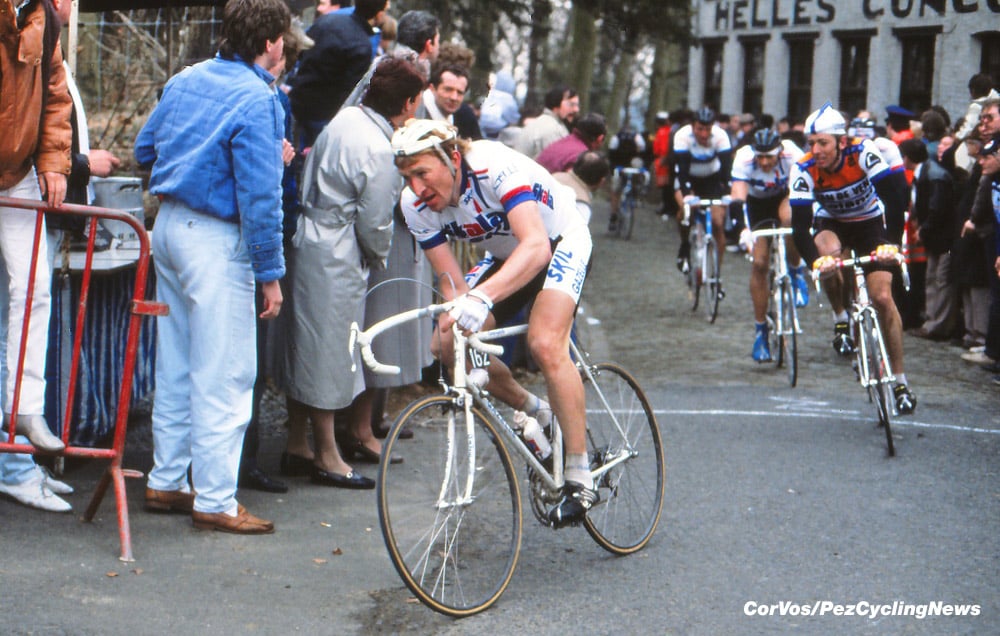 PEZ: Then straight into the Panasonic team car as DS under ‘man of iron,’ Peter Post.
Yes, I accepted Peter Post’s offer to become a DS with his team and yes, he was a hard man but very correct, you’ll never hear me say a bad thing about him. 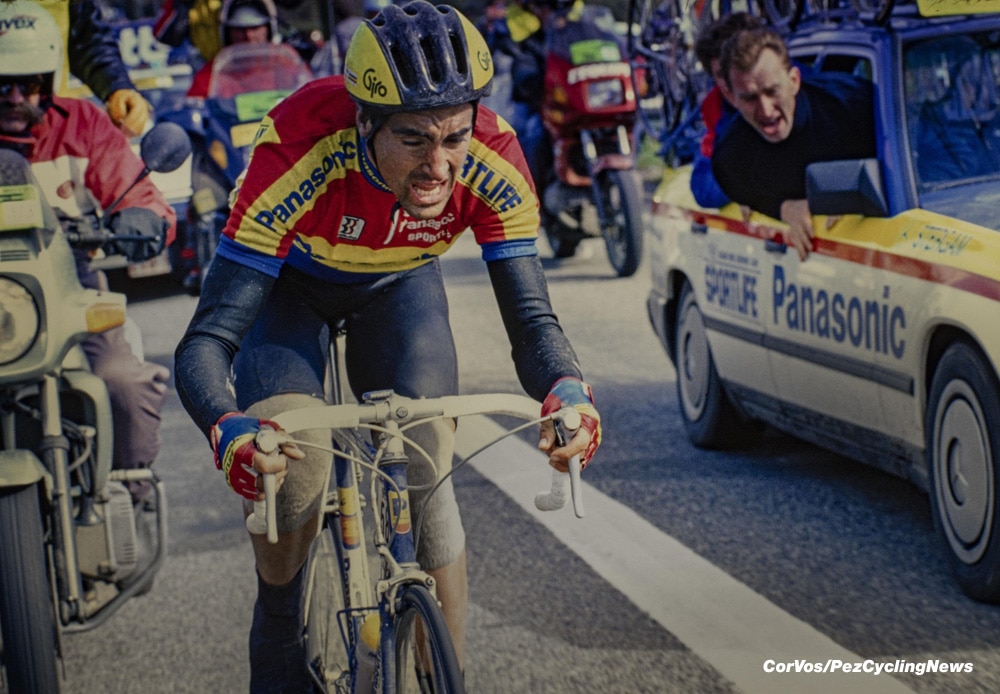 In the Panasonic team car behind Eric Van Lancker

PEZ: Tell us about your training back then.
I never had a coach and it was only in my last season that I did any what you would call ‘scientific’ training when I purchased SRM cranks. I set my own programs back then, a lot of kilometres with intervals included depending on what races I was preparing for. 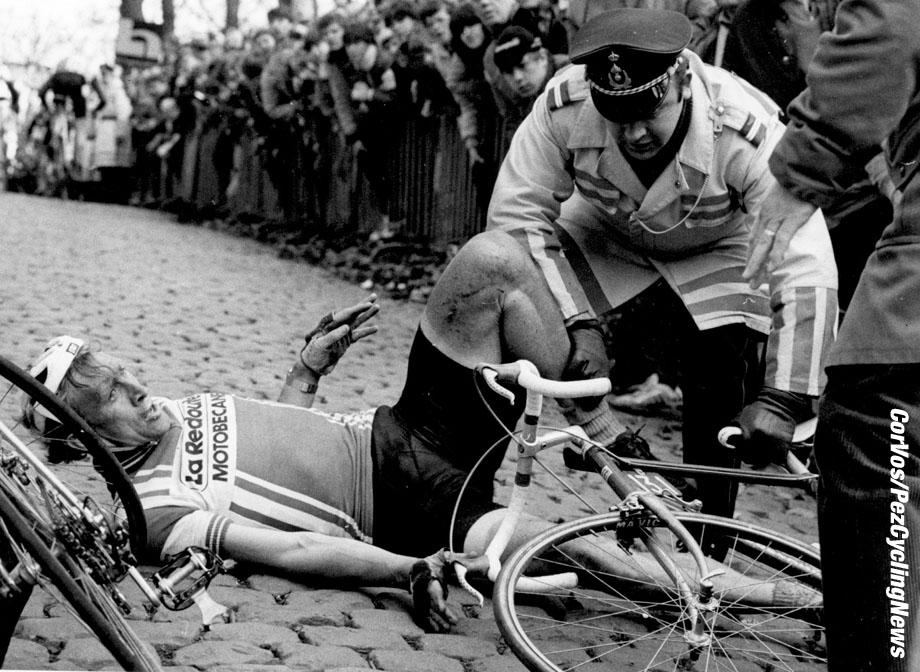 Crash on the Koppenberg

PEZ: Would you like to be a professional now?
I think I was lucky with the time I was a pro, there was more friendship and camaraderie, now they don’t mix, they stay in the bus until five minutes before the start. We used to be together a lot more and of course there were no smart phones, tablet and laptops to stare at. 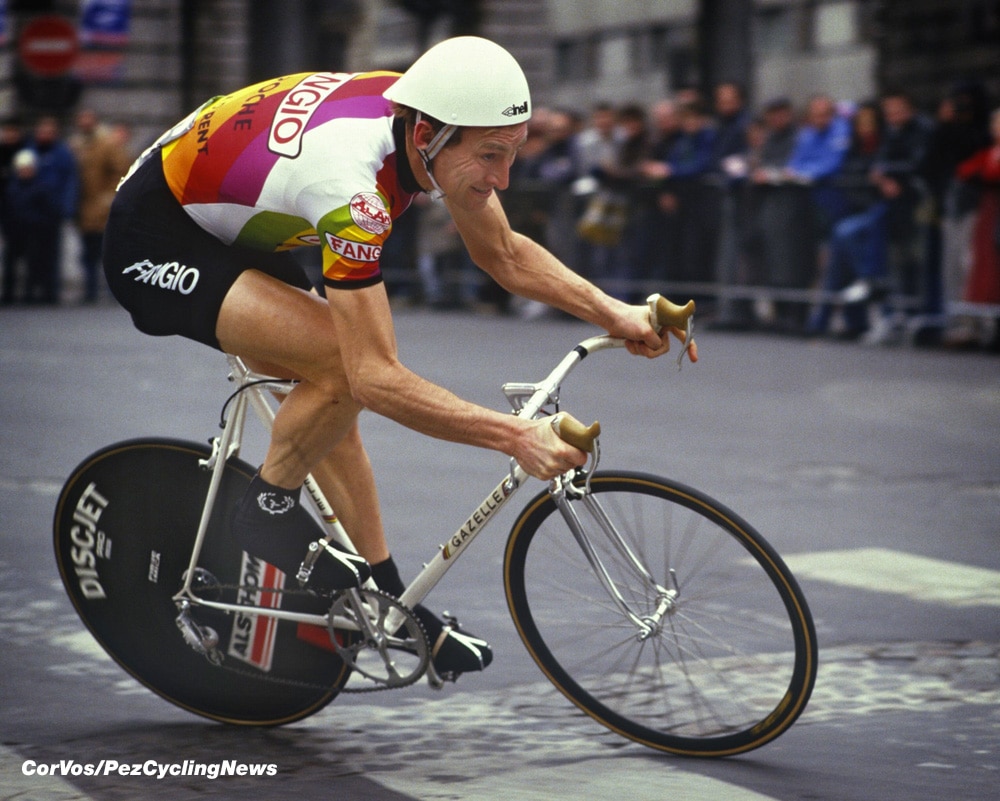 TT action with ADR-Fangio-IOC-MBK in 1987

PEZ: You were an accomplished track man, did you ride the six days?
Yes, Gent, Grenoble, Munich. . . They were hard after a full road season but we had to ride them in order to make money, there were no riders’ wages like they are now. 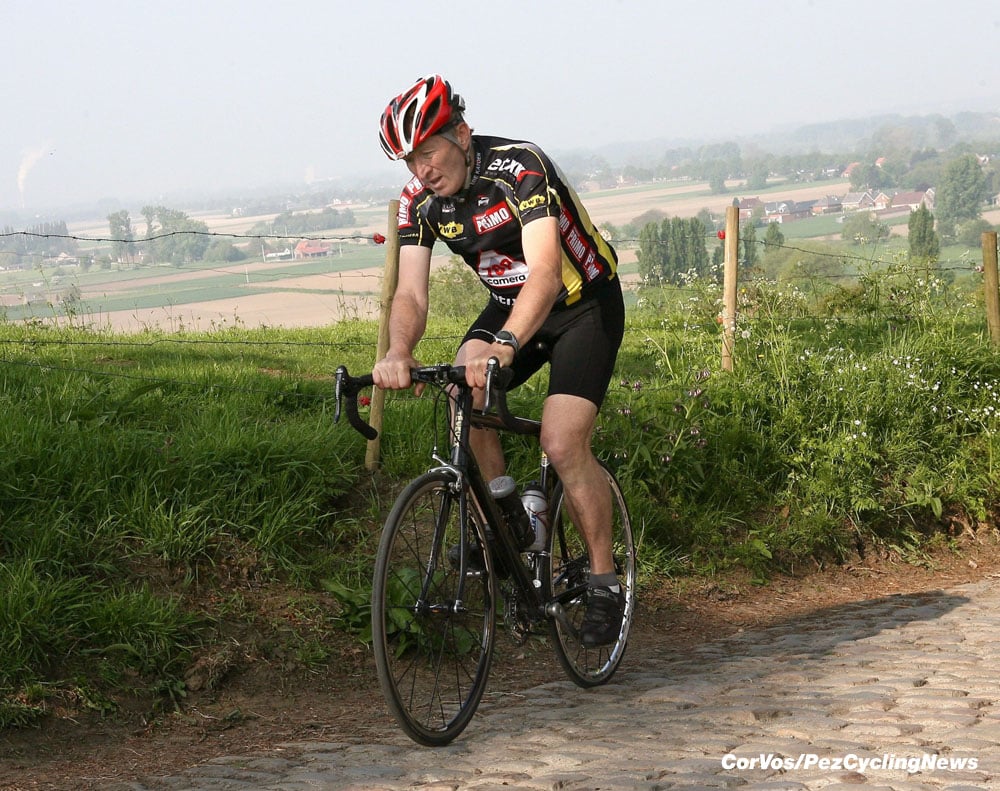 PEZ: How was the transition from rider to DS for you?
It was no problem, it was something I always had in mind to do and was able to give my riders good advice on tactics and training – and as I said, from 1987/88 I embraced training on power and was able to advise on that. 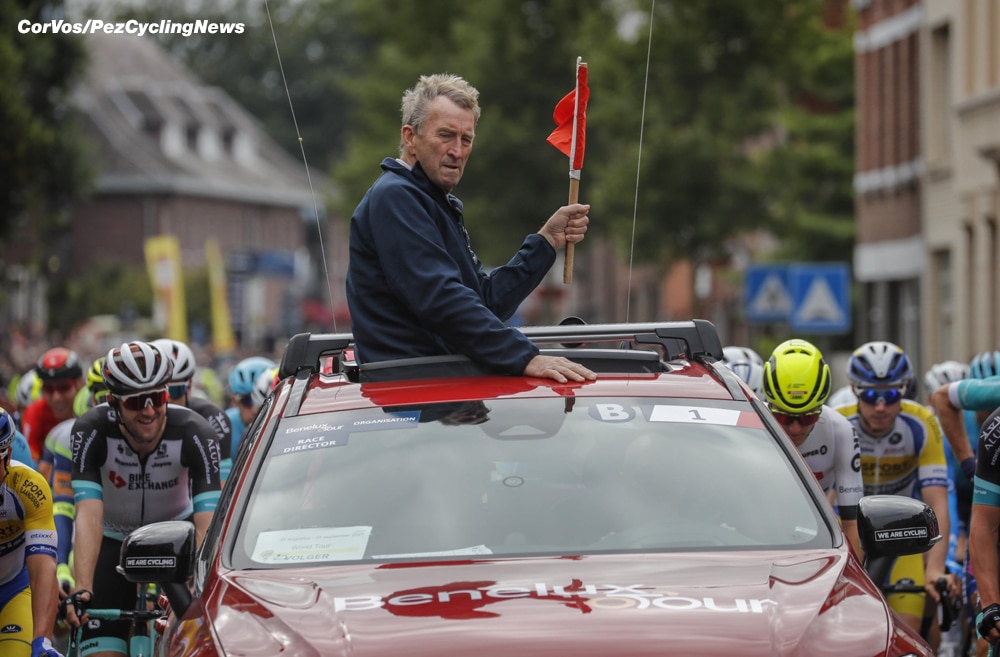 Race director at the Benelux Tour 2021

# A big thanks to Ferdi for his time and words. #

EUROTRASH Monday: All the Cycling News You Need to Know!