Thomas Mein – Silver at the U23 European Cyclo-cross Championships

Rider Interview: Ed Hood is nursing the loss of the ‘6 Days’ by throwing himself into the mud of cyclo-cross. 2020 has been the season of the ‘Young Guns’ and one of the riders on the way up is silver medalist at the Euro cyclo-cross championships – Thomas Mein. Ed gets his story. 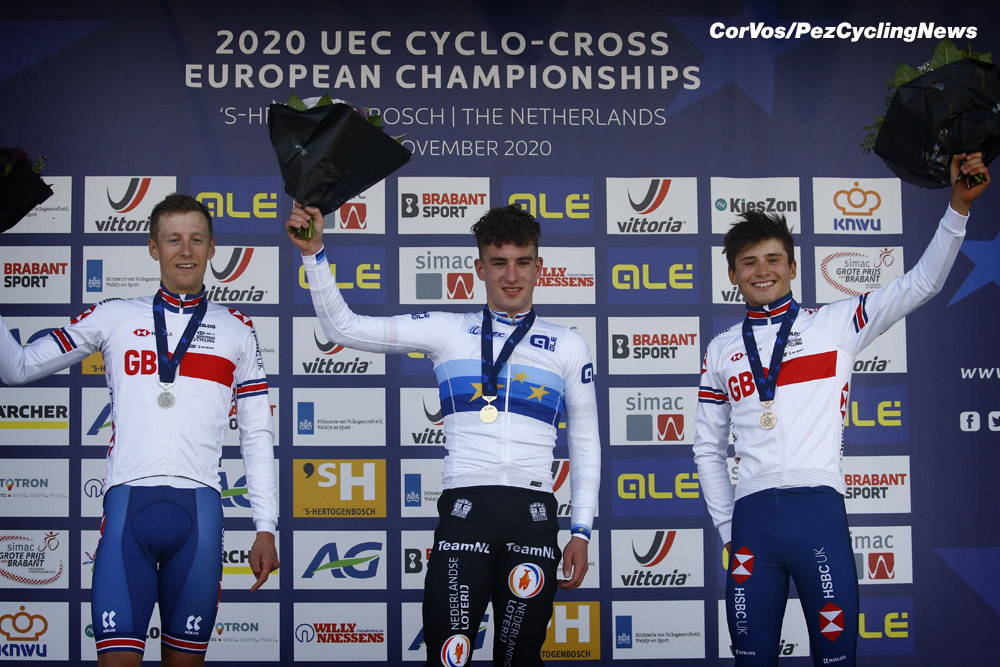 It’s not every year there’s a Grand Tour taking place at the same time as the European Cyclo-cross Championship but this is ano 2020 and the ‘new normal’ is upon us. The trouble is that the finale of a Grand Tour, particularly one as dramatic as the Vuelta is always going to attract many more column inches than the Europeans.

The series was held in ‘s-Hertogenbosch, Noord Brabant in the Netherlands. Belgium’s former u23 World Champion, Eli Iserbyt took the Elite title from compatriot Michael Vanthorenhout and Dutchman Laars Van Der Haar with seven Belgians in the top 10 finishers. The u23 title, unsurprisingly, went the way of current World Champion, Ryan Kamp of the Netherlands. But the other podium places contained more cheer for us ‘Anglos’ with bronze going to Scotsman, Cameron Mason and silver to Englishman, Thomas Mein. 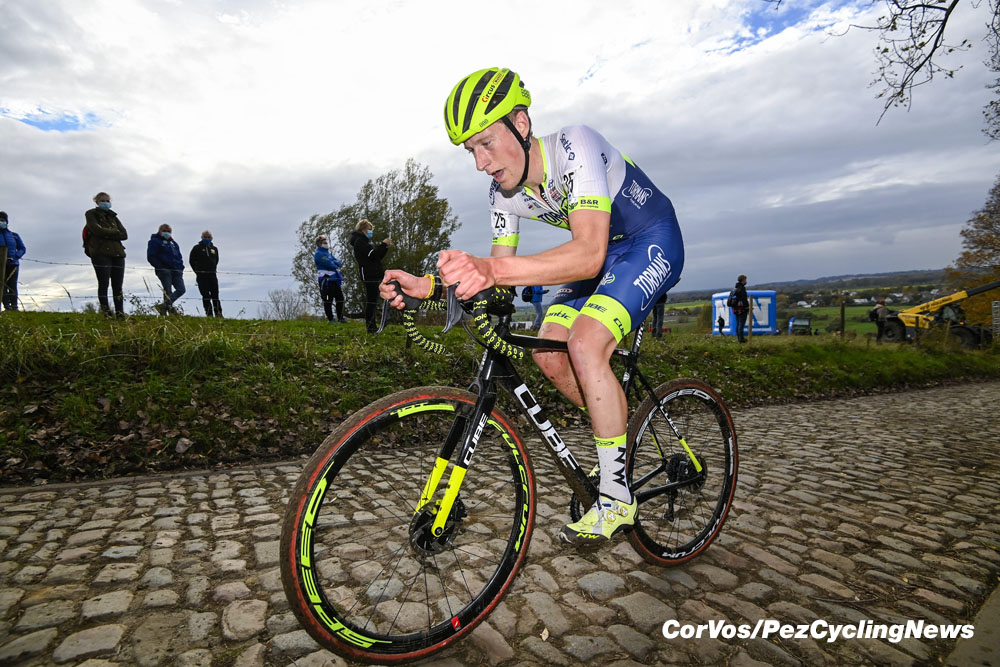 Mein first caught our eye when he won the junior Koppenberg ‘cross in 2016 – no mean feat given the number of ‘Wout Wannabees’ in Flanders. And our ears really pricked up when we heard he’d won the Tabor, Czech Republic round of the 2019 UCi World Cup. We caught up with the 21 year-old from Gateshead in the North East of England a day or two after the Europeans at his base in Flanders near Herentals; and if you know your cycling history then you’ll know that the city’s most famous son is Rik Van Looy – but Wout Van Aert is threatening to overtake Rik II for that accolade. Mein rides for the well organised Tormans Cyclo Cross Team – the muddier side of the Circus Wanty Gobert UCi Pro Team which moves up to World Tour for 2021. 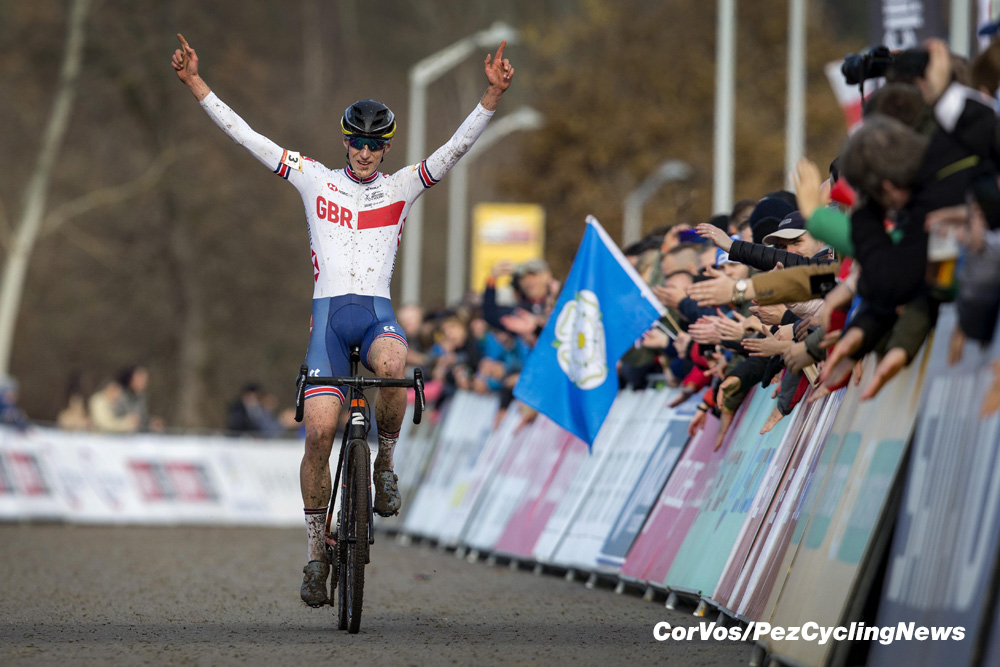 We opened by asking how he got a ride with such a prestigious outfit?
Thomas Mein: They were aware of me from my win in Tabor but the connection came about via the rep. for Cube bikes – which the team rides – he was visiting a friend’s bike shop back in the north east and told my friend about the new ‘cross team which was going to be riding Cubes, my performances were mentioned and it all stemmed from there. I met the team for a chat at Koksijde and we reached an agreement. The Service Course is only three kilometres from where I live so it’s a perfect set up, if I have any issues with a bike I just drop it off and pick it up once it’s been attended to. And the Lichtaart Forest, the famous cyclo-cross training ground is only 15 minutes away – our manager, the former double World Cyclo-cross World Champion, Bart Wellens organises our training there on a Wednesday. 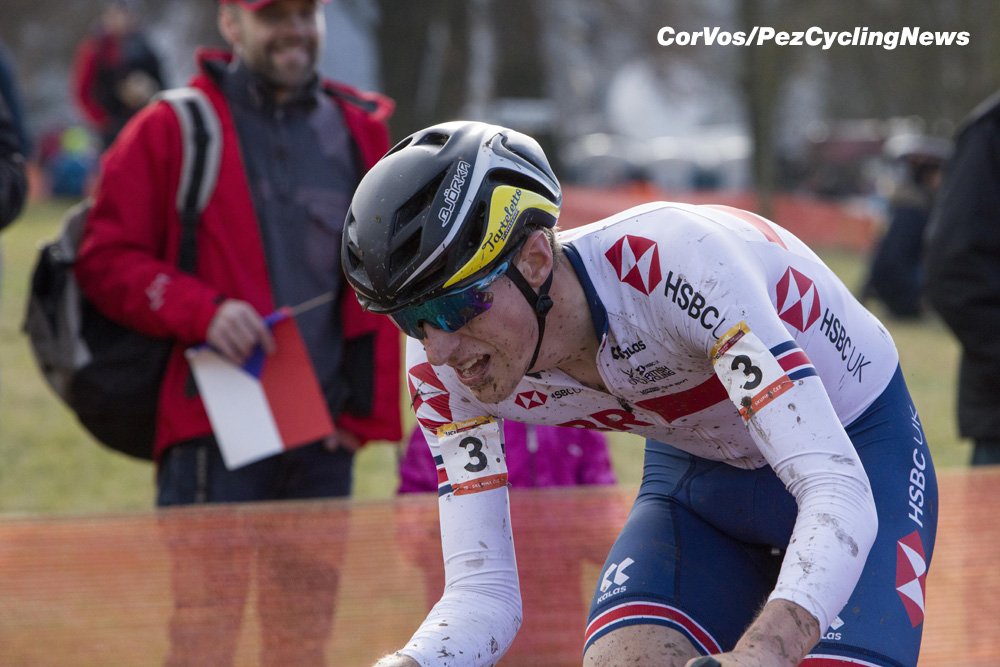 On the way to the win in Tabor

PEZ: What’s the Cube like?
They’re nice machines, we run full Shimano Di2 with disc brakes, wheels are by Fulcrum with Challenge tyres; we have the full range to choose from. There’s the ‘Koksijde’ for sand right up to the ‘Grifo’ knobbly jobs.

PEZ: In the summer you ride the road with the UK Canyon team, the lack of road races can’t have helped your preparation for the ‘cross season?
Yes, I’ll be back with Canyon on the road next season, they have a good programme; but yes, I was a bit worried about my lack of races in the summer, however I think that everyone was pretty much in the same boat so it’s not been a problem. 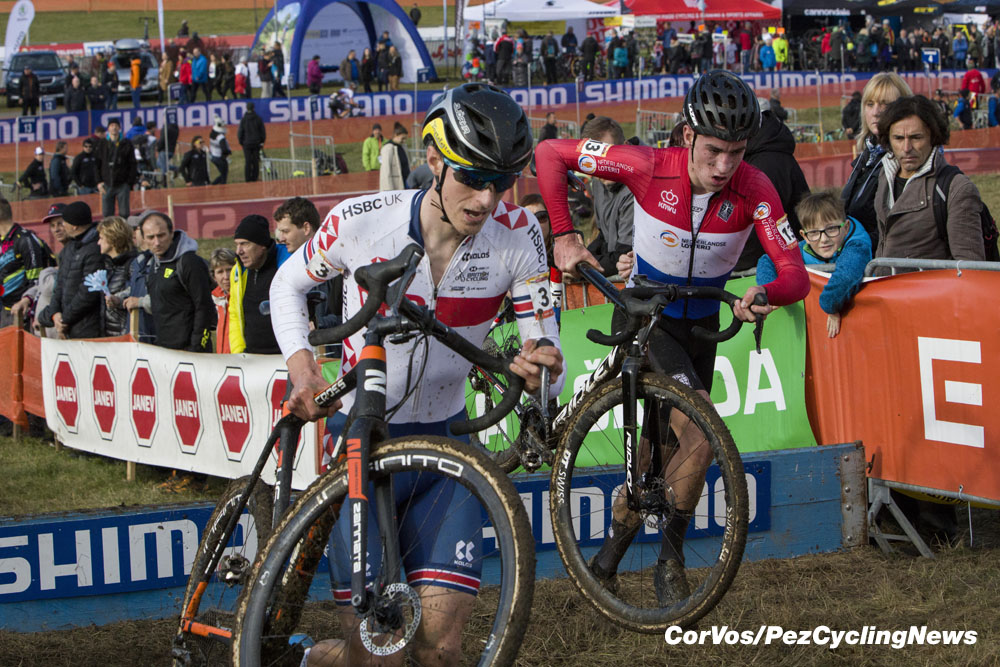 PEZ: Ryan Kamp won the Euros, you were third to him at the Nomay World Cup race back in January but you were a lot closer to him on Saturday at ‘s-Hertogenbosch.
He’s going really well right now, at a level above the rest and he’s a year younger than me. Because of the Covid situation, most events don’t have a separate u23 race, we’re in with the Elites which is a good thing in a way because it gets you used to what it’s going to be like when you step up. The races are longer and the starts faster, a much higher standard.

PEZ: What’s your favourite kind of parcours?
TM: The Tabor course was my kind of course, I like courses with a bit of elevation, fast flowing tracks, I’m not so keen on the crazy muddy stuff which involves beet fields. 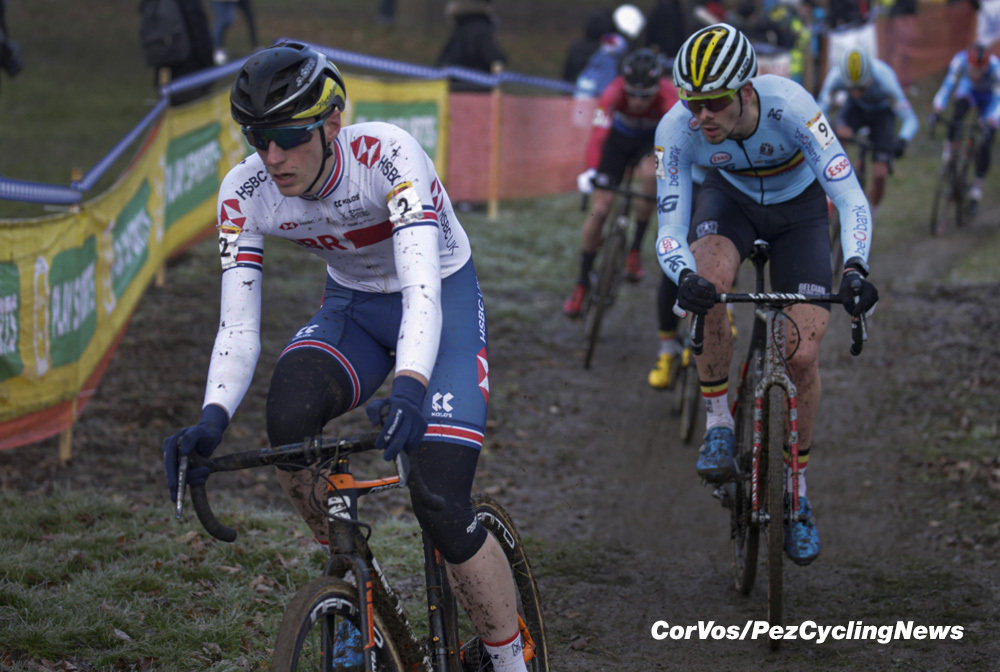 PEZ: Who coaches you?
I work with Velocoach North East and have done for the past four years, it works well for me. But then I have the group sessions I mentioned above, in the Lichtaart Forest with Bart Wellens. All the ‘cross teams train there on a Wednesday afternoon, Fidea, Alpecin. . . We practice starts, racing for that first corner and do 20 minute race simulations. 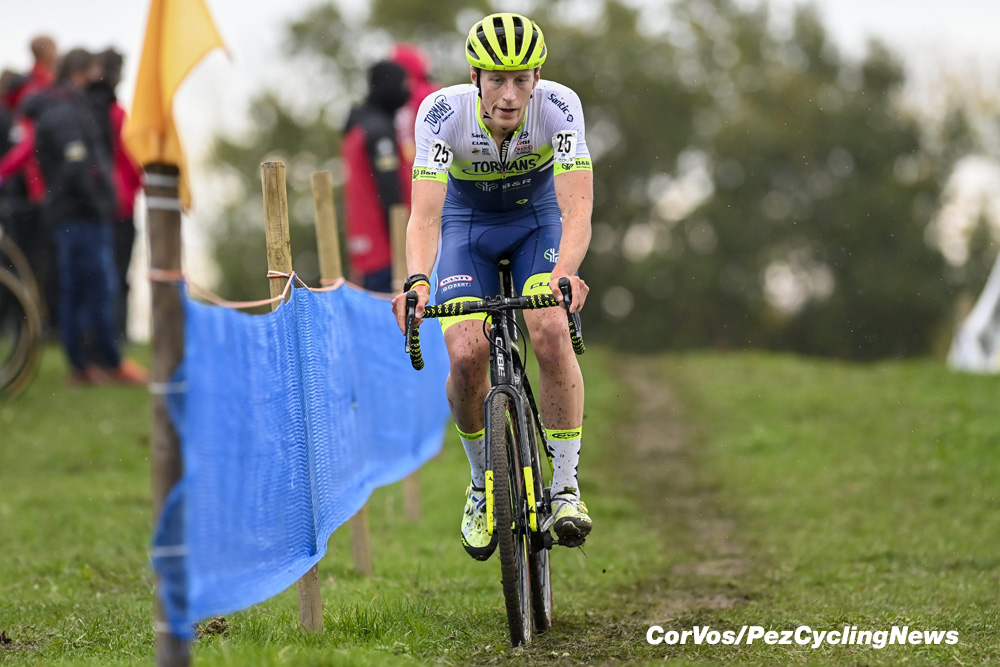 On the grass of the Koppenberg

PEZ: What are you strengths and what do you need to work on?
My climbing is good, I generate good power but in the past I wasn’t so good on the low cadence stuff, slogging through mud or sand at 50 rpm – but I’ve been working on that. 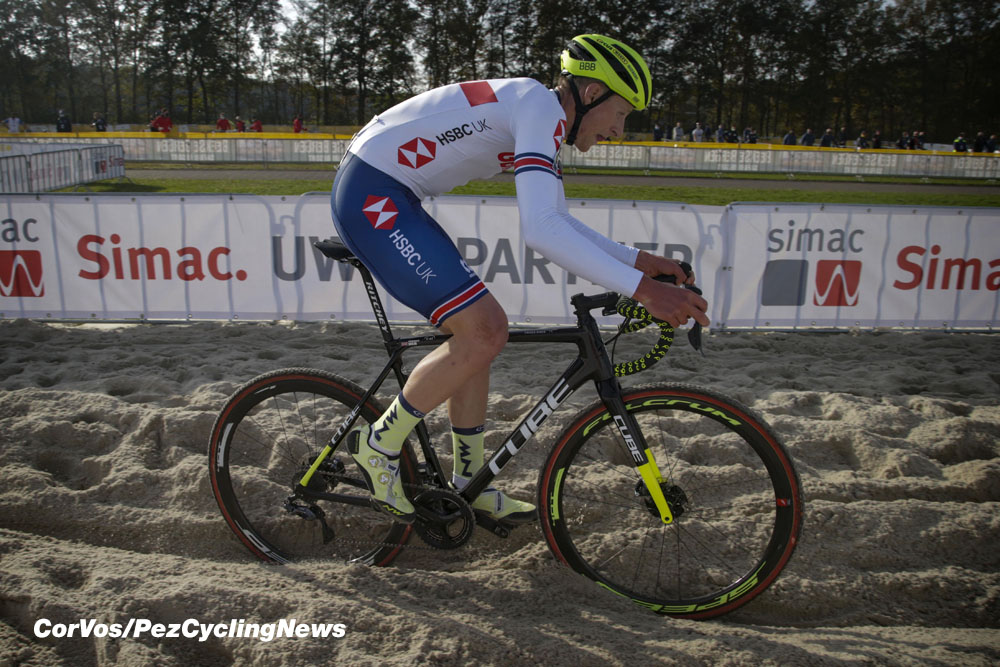 Through the sand of Rosmalen

PEZ: How have the season-long ‘cross competitions been affected by Covid.
The UCi World Cups have suffered badly with the programme down from 11 to five events; November 29 – Tábor, Czech Republic; December 20 – Namur, Belgium; December 27 – Dendermonde, Belgium; January 3 – Hulst, Netherlands and January 24 – Overijse, Belgium. The Super Prestige still has eight rounds though from Gieten in October through until Middelkerke in February. The DVV Trofee still runs its full course too from the Koppenberg ‘cross in October through to Brussels in February. As I was saying, many of the races don’t have a u23 race so we’re in with the Elites racing for an hour instead of 45 minutes.

PEZ: What’s the main ambition for this season?
It would have been the World Cup but I’m now just looking to get consistent racing in and ride well at the Worlds in Ostend at the end of January. 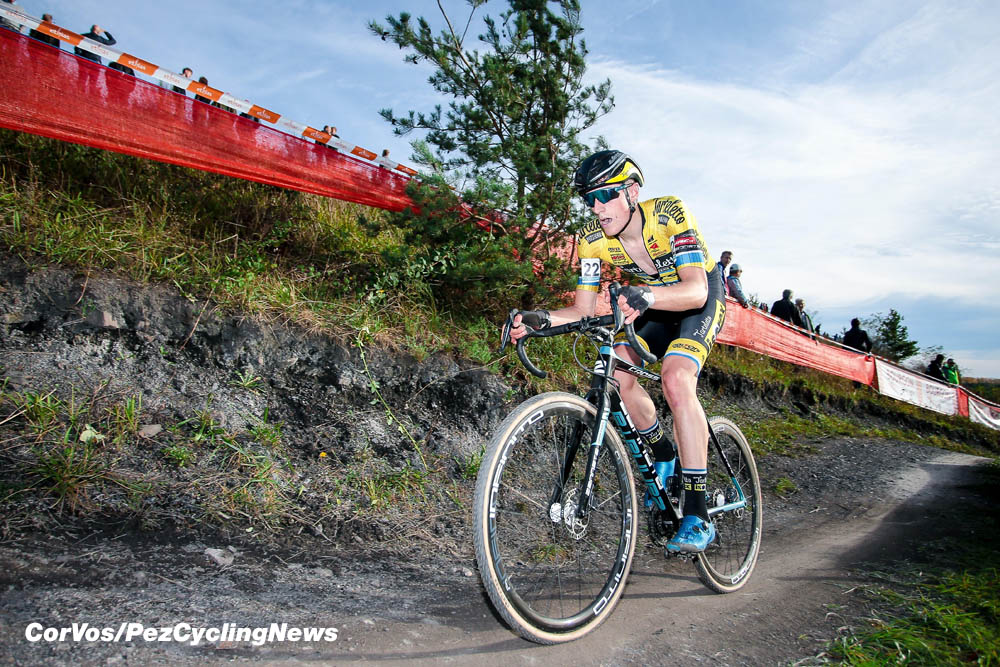 PEZ: What’s it like racing with no crazy fans present?
For the first few races I was just so focused on being back racing that I didn’t really notice but I noticed it at the Euros, racing in silence – it’s a strange sensation. . . 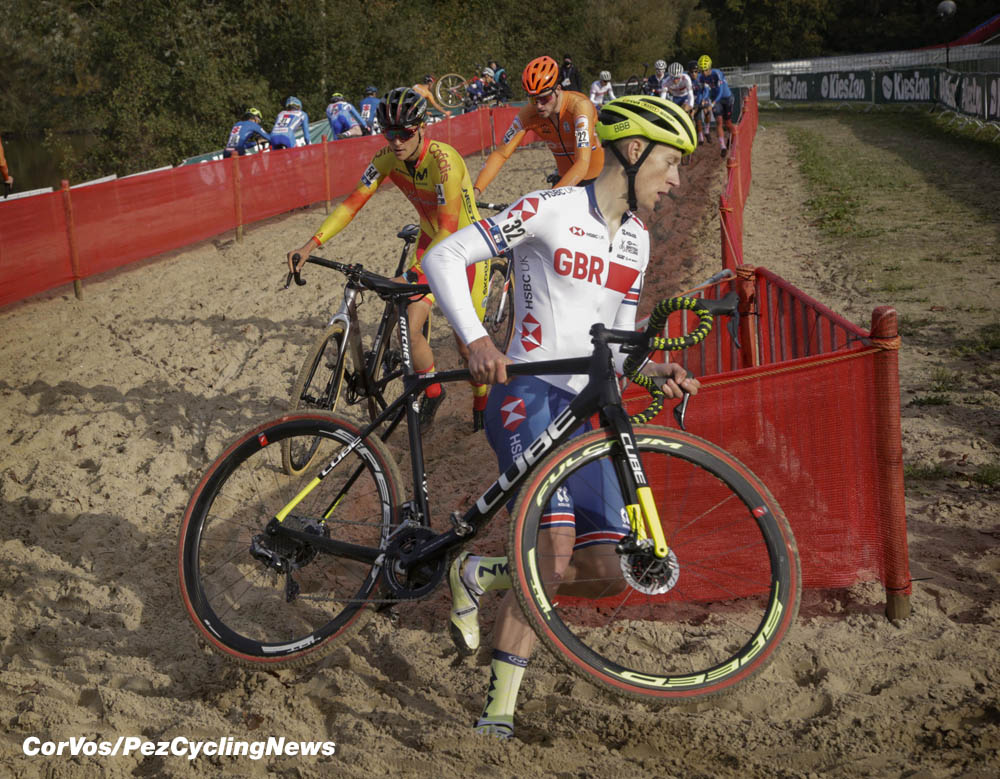 # It’s been a ‘strange’ year all round, we wish Thomas ‘all the best for the rest of the season and with no six days to distract us we’ll be focusing heavily on ‘cross over this winter. # 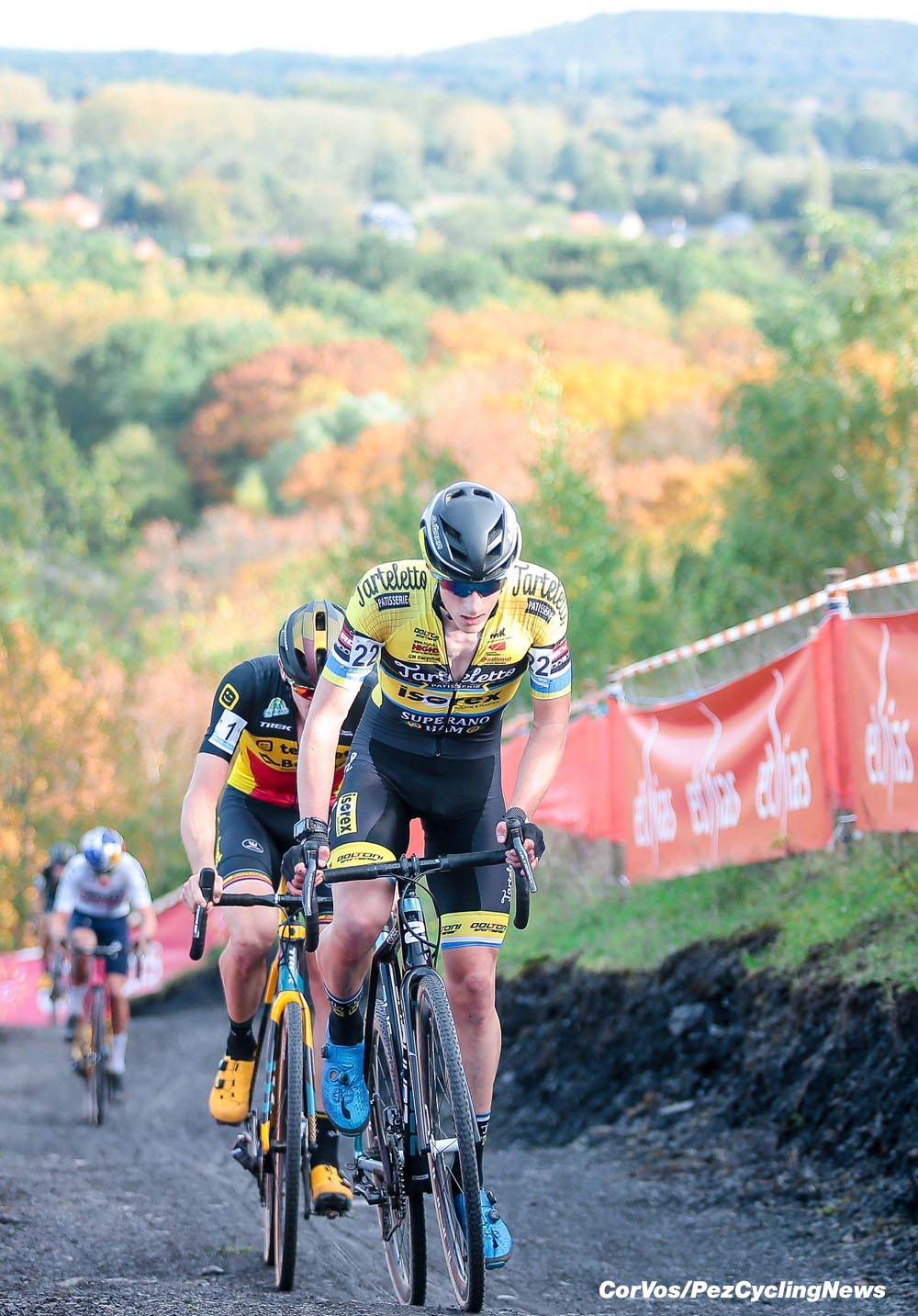