Tour Rider Interview: Jeff Pierce is one of only two US riders to have won the final stage of the Tour de France on the Champs-Élysées in Paris. The other is Greg LeMond who won in 1989, Pierce took his victory two years previously, just ahead of Canada’s Steve Bauer. Ed Hood has his story. 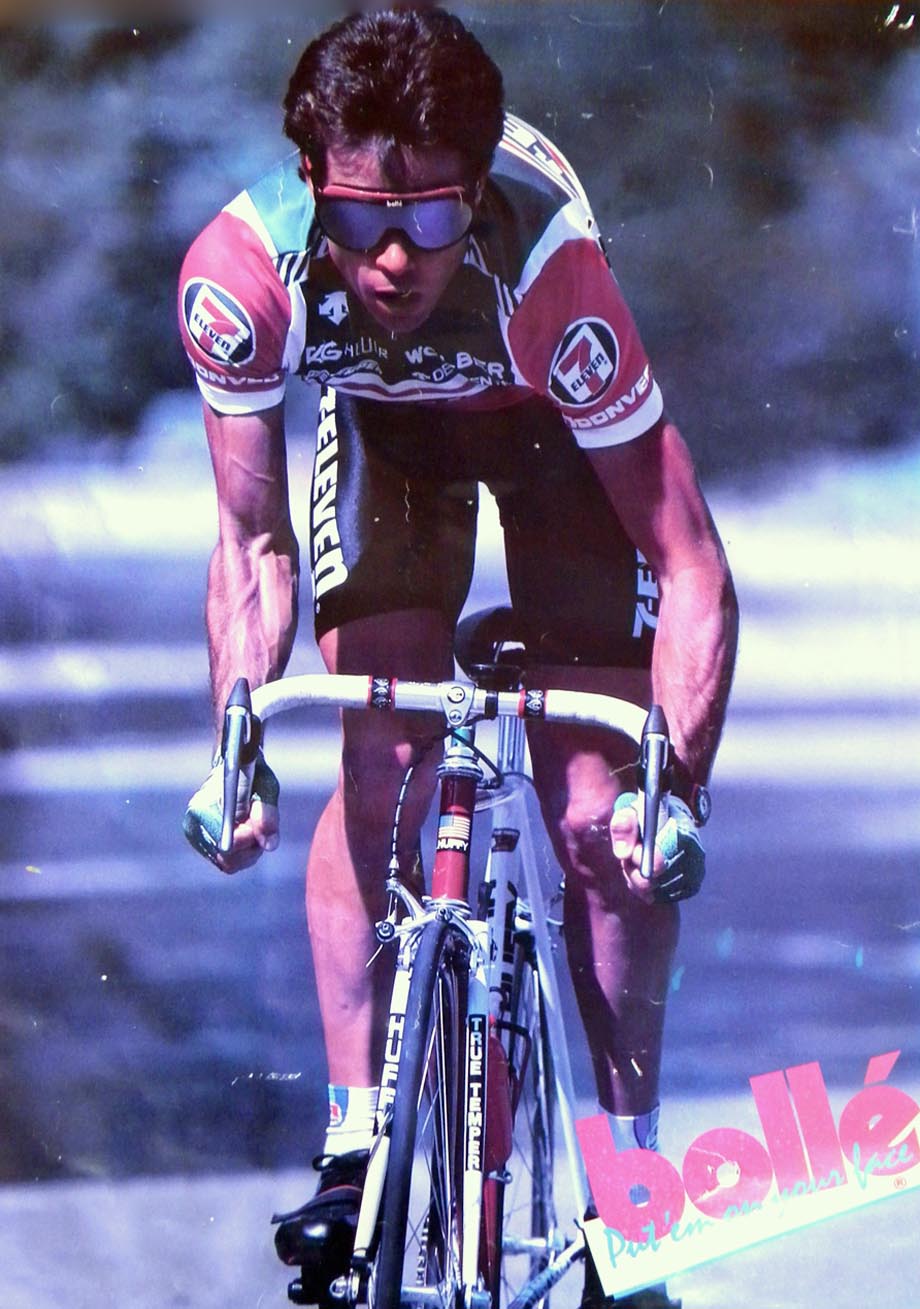 Jeff Pierce? Isn’t he that dude from the 7-Eleven team who won the last stage of the Tour de France back in the 80’s? That’s the guy! But there’s a little bit more to the man than that in a career which lasted some 22 years. . .

PEZ: Your first international ride was in the tough amateur ‘Milk Race,’ Tour of Britain in 1980?
Jeff Pierce: Yeah, my first time on a plane, too! Eddy Borysewicz our National Coach saw us off at the airport and said to me; ‘you skinny guy, must make top 20 finish or you off team!’ The race was absolutely brutal with the Russians unbelievably good, they just smashed everyone, a total process of attrition. The Russians were first, second, third, fourth and sixth on final GC whilst I finished 37th @ 1 hour 6 minutes, but remained on the national team.

PEZ: You were third overall in the Coors Classic in 1984 but is it fair to say your ‘breakthrough’ ride came in the ’85 Coors when you won that mountain stage?
I think so, Stage 10, Vail to Copper Mountain over Battle Mountain, Tennessee Pass and Fremont Pass which was at 11,316 feet above sea level. I got away with the Colombian guys Cabrera and Lopez on the first climb then dropped them on the last climb – not a bad result for a ‘crit guy’ from Detroit! Yes, a big breakthrough. 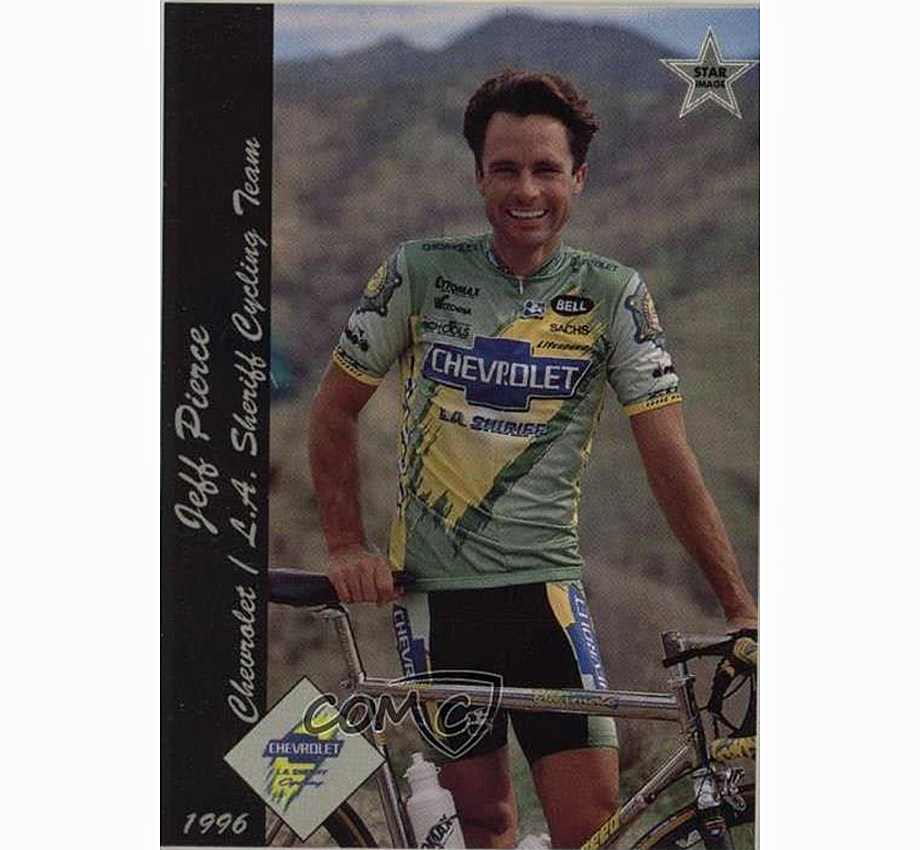 PEZ: And you won the Tour of Berlin that year too?
Yes, that was a ‘preparation’ race for the US Milk Race team – I remember circuit races and lots of cobbles. In the Milk Race that year, I got on the podium twice with a second and third place on stages; and Roy Knickman took the jersey for a short spell, which was a big deal for us. Unfortunately, four of our team had crashed out so it was difficult to defend; I remember on one stage, when Roy was in the break, the team manager saying to me; ‘you have to block for Roy.’ So that was what I was doing, then he comes back to me and says; ‘OK, now I want you to get across to the break to help him!’

The final stage of the 1987 Tour de France

PEZ: Pro with Schwinn for 1986 but you rode the Tour de France for 7-Eleven?
With Schwinn I wasn’t technically a pro, it was a kind of halfway house and they let me away to ride the Tour with 7-Eleven. We were actually meant to ride the Vuelta that year – it was in the spring back then – but something happened on the international stage that was going to stir up a lot of anti-American feeling. We were at the airport, ready to fly to Spain when we received the call from Jim Ochowicz that we weren’t going, it may have been too dangerous.

PEZ: The US domestic scene to le Grande Boucle, that’s quite a jump?
We’d all had some big results on the domestic scene, 85/86 but we didn’t know much about the Continental scene. We were pretty good riders and keen to see how we’d measure up against the Europeans. It was absolutely brutal – after week one we were in ‘survival mode’ but that said, for guys who’d never ridden a three week tour, five of us got to the finish, Alex Stieda had the yellow jersey and Davis Phinney won a stage so we put on a pretty good showing. 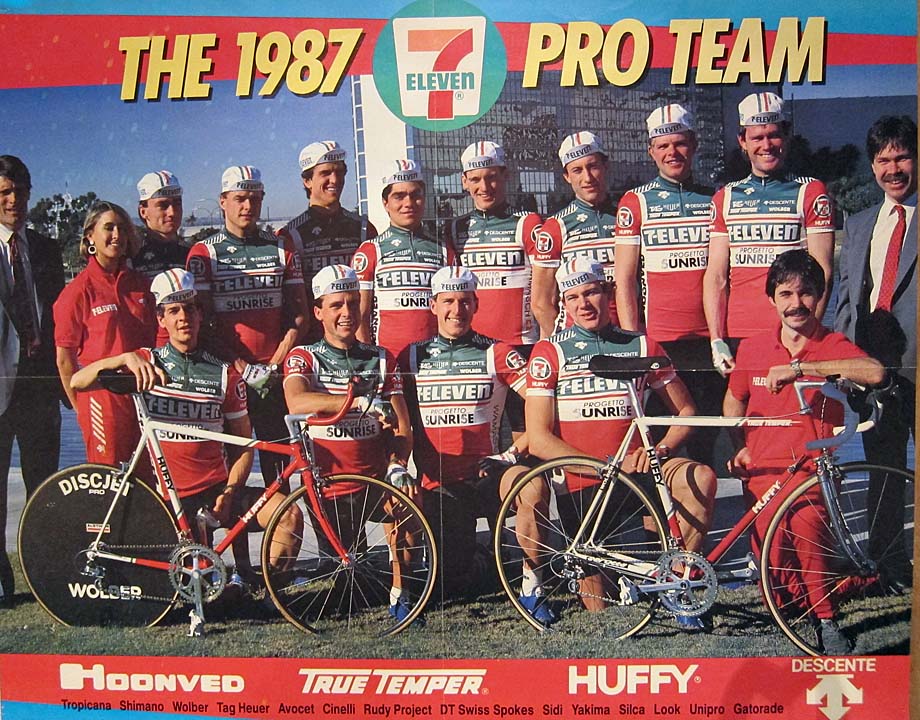 PEZ: Milan-Sanremo in 1987?
I remember Etienne, our soigneur telling us that the Classics were ‘no joke’ – he was right and that was one pretty long ass race! The Italian style of racing took a bit of getting used to, they’d just roll along for the first four hours then the last couple of hours would be ‘full gas’ at 110% – the Italians didn’t like if you attacked early. Bob Roll and I used to go from the gun and they’d have to chase, that really upset them, they’d be yelling at us but Bob and I had so much fun. . . 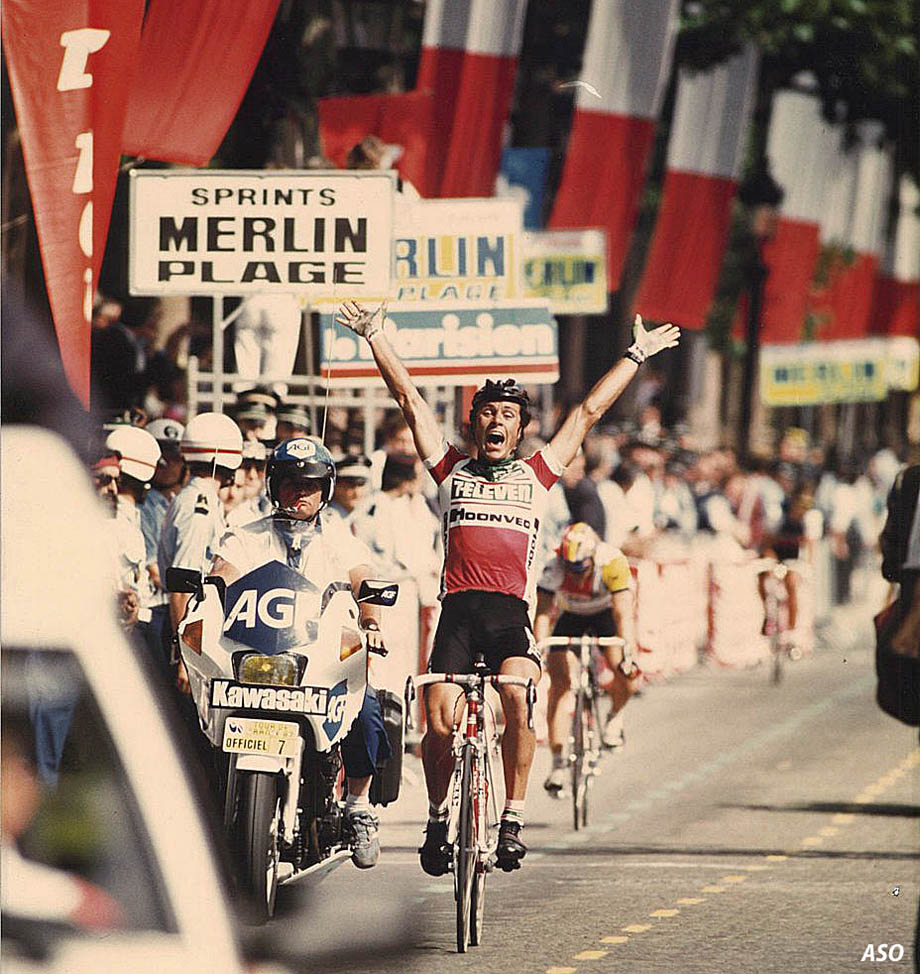 The Tour win in Paris

PEZ: ‘That’ Tour, ’87. . .
It was ‘survival’ again; but Davis won the Bordeaux stage and Dag Otto Lauritzen won the stage to Luz Ardiden. On the final stage we had the green caps as best team on points and wanted to hang on to them; we were riding for Ron Kiefel, our best sprinter and trying to set it up for him. With a couple of laps to go, two guys took off, got a gap and I went with them, guys came across and with a lap to got there were maybe 12/13 of us away and I felt it could ‘stick’ – I was a climber but I could sprint a bit and thought I could beat most of the others and a top 10 on the final stage would be cool. Someone attacked on the descent of the Champs, the rest hesitated; I slammed it into my biggest gear and went with him. It was a good place to go because the break was thinking we’d be caught and the peloton eased a little because they thought the catch was made. Steve Bauer was in the break and he saw what was happening and came after me but burned all his gas to get up to me and I knew I had to have that last little bit of energy to survive – which I obviously did. It wasn’t until a few years after when I watched a video of the finish that I realised how foxy Bauer was – when I looked over my left shoulder he went right and then when I looked over my left shoulder he went right! But like I said he had nothing left once he got to me. 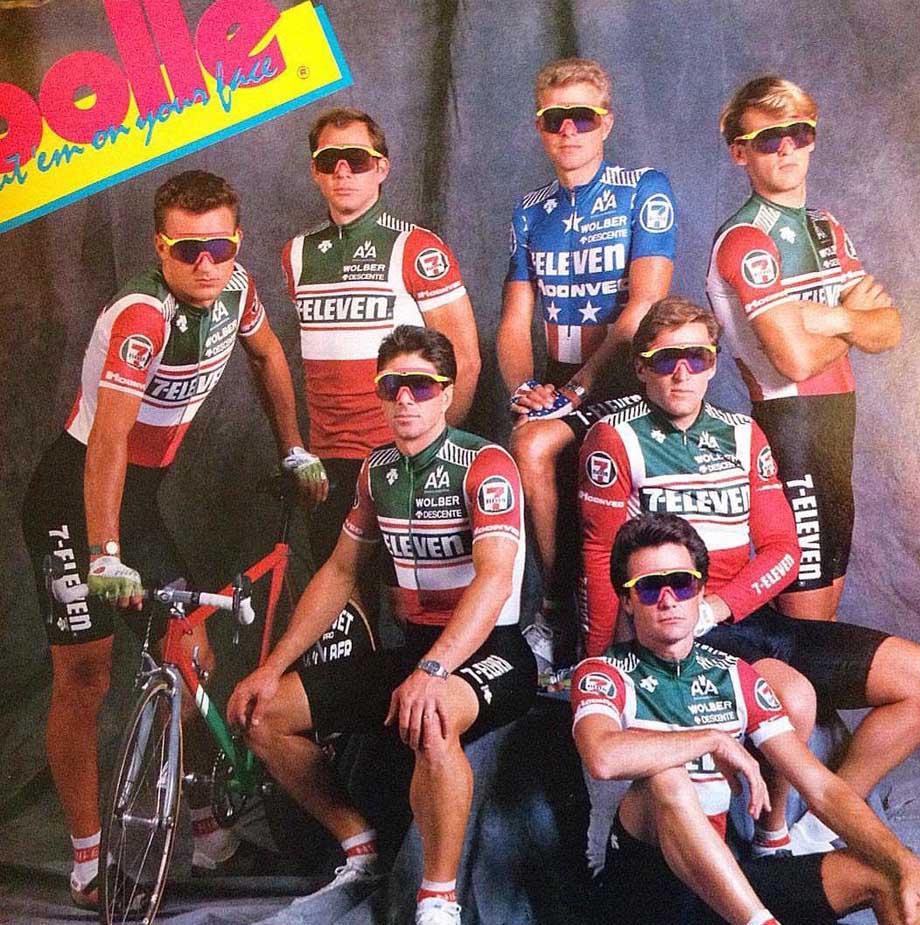 PEZ: And you were on the legendary Hampsten 1988 Giro winning 7-Eleven team; how was the Gavia for you?
We’re still the only US team to win the Giro – we went in very well prepared and Andy was in great shape. I’m from Michigan so I’m used to snow but that day the descent off the Gavia it wasn’t like a road, it was like a toboggan run. Within 15 minutes, I couldn’t feel my legs from the thighs down and remember thinking; ‘how am I pedalling?’ My brakes didn’t work and I couldn’t see – there are sections I have no memory of. The next thing I was in a trailer at the finish having dry clothes put on me and drinking hot tea and whisky – it was surreal.

PEZ: Giro, Suisse Tour and Tour de France in 1988, that’s quite a workload.
And the Coors Classic too, I think I raced something like 80 out of 100 days in that part of the ’88 season.

PEZ: Tell us about your 1989 Tour of the Basque Country stage win.
That was a fun day, there was a break of maybe 20 away with me, Ron Kiefel and Andy Hampsten – Ron attacked, they brought him back then it was Andy’s turn, he came back and I went. There were two Spanish guys with me and I could see them talking and cutting a deal, they didn’t know me and I acted like I was empty. At the finish, the one guy lead out the other, I sat on and went straight past – they shouldn’t have under estimated me!

PEZ: The ’90 Giro was your last Grand Tour?
Yeah, I was down to ride the Tour because Davis Phinney was waiting on Connie giving birth to Taylor. But she gave birth before the Tour and Davis flew out so the 1990 Giro was my last Grand Tour of seven.

PEZ: Back racing in the US for 1991?
There were plans for a US 7-Eleven team which would also race in Europe but that fell through and 7-Eleven became Motorola – time to move on. . .

There was a guy starting a new team, Chevrolet-LA Sheriffs and I joined up. The first year wasn’t great but year two we had the likes of Malcolm Elliott on board and we went on to be the dominant team in the USA. We had the bases covered, if it was a field sprint we had Malcolm and if not then we always had cards to play. The team lasted six years with ’96 my last year.

PEZ: You were 1995 US Madison Champion with Steve Hegg?
I grew up on the track and was trying to make the Olympic team, ‘Project 96’ for the points race, it was a two day trial, we won the madison but I failed to make the team – it was a good run though, a 22 year career on the bike. 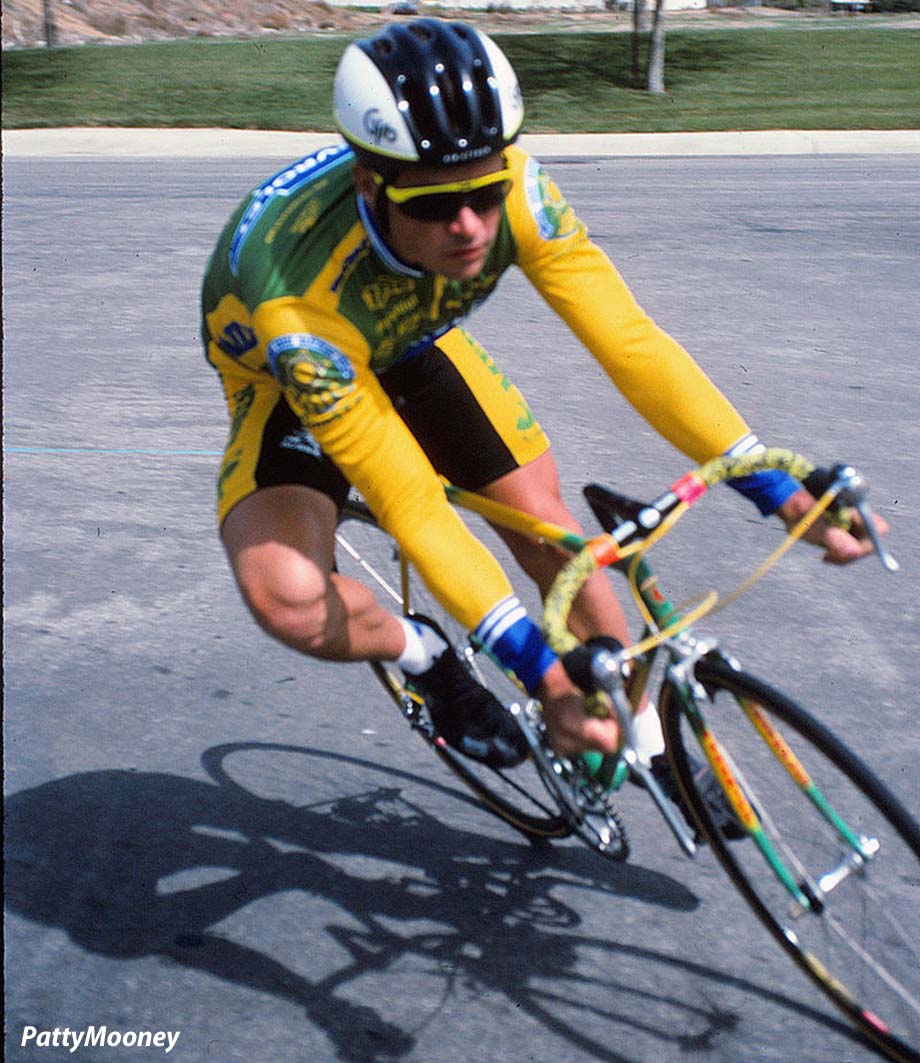 PEZ: Civilian life?
I retired at the end of ’96 and went back to my house and boat in San Diego and January 2nd ’97 I moved to a job in publishing in New York – Bicycling magazine and Rolling Stone. The I worked with GT bikes in sports marketing, BMX and MTB but then they said; ‘we’d like to put our road bikes in the Tour de France – this year!’ This was in April so obviously all the teams have their bike deals in place. But we heard that Lotto didn’t have a great deal with ALAN, we met with them and hammered out a deal. I delivered them three days before the start of the Tour; there was a lot of resistance from the riders but I assured them they’d love the machines and sure enough, they started coming to me and thanking me, saying the bikes were stiff and super-responsive. Then I worked with US Cycling and hired Jim Miller who took over when I left to go to T-Mobile. I was with them for 15 years on sales and marketing and when Jim left US Cycling last year I came back. I love it, it’s never easy but it’s my passion; in the end you just have to do your best – and that clock is counting down to Tokyo. . . 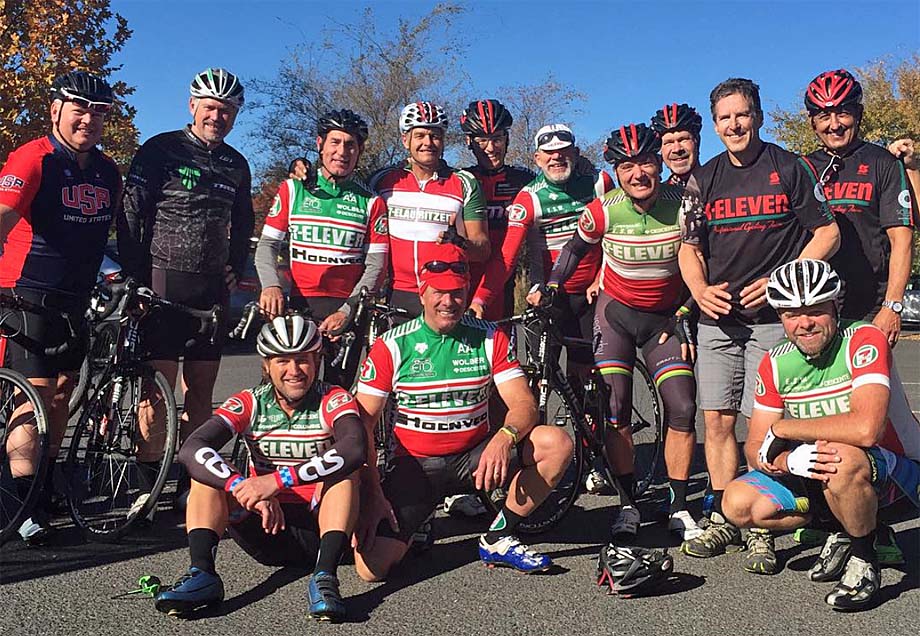