PEZ dialed in for this morning’s press conference with Team Discovery Channel’s Johan Bruyneel and George Hincapie, for some last minute q&a on you know what… le Grand Boucle! For the first time in six years they’re not the favorite – which means a whole new approach to the race… 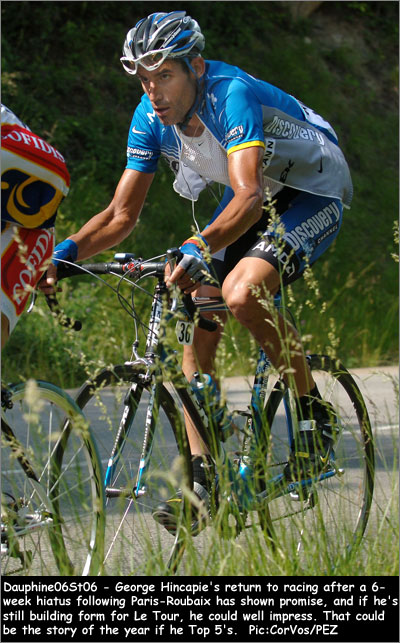 Compared to past years where there has been one outright leader, this team looks heavy on chiefs and light on … er… helpers…, with nary a sprinter in sight. What are they up to… I asked Johan myself:

The Team Breakdown
Johan: The team is divided into 3-4 gc riders, 2-3 attackers, and 3 support riders. For support, Noval, Padrnos and Ekimov will have to be around the team whenever they are needed, to help George, or keep Paul, Azevdo or Popovych out of trouble. They’re experienced and complete riders for the flats, and can take it in the hills.

Then we have Rubiera and Martinez, they’re role will be to really create trouble for other teams and make sure we are in a position to wait and see how the other teams will deal with the trouble those two guys are going to make.

Then we have George, Savoldelli, Azevedo and Popovych who have the physical qualities to finish at a minimum in the Top 10. They have gc ambitions, and I think the combination of those 4 will be a very strong weapon to fight the favorites.

It would be a success if 3 of those 4 can fulfill the expectations and ultimately if we have only one and he’s very high up [on gc] then he’s the guy we’re gonna work for. 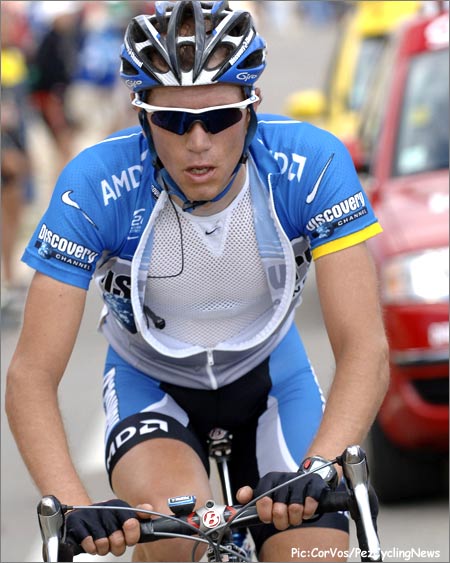 Jose Azevedo showed some solid mountain form in the Dauphine, and looks ready to mix it up with the Tour’s best.

No sprinters this year:
Johan: Boonen and McEwen are definitely the two strongest sprinters, and our faster riders are not really on that level, so you have to be realistic. We have a guy who can be 4th or 5th, and that’s not really what we’re looking for – we want stage wins, high gc classification, and people who can support the team. If you bring a sprinter to the Tour, you already need 2 or 3 other riders who will ride at the service of that sprinter.

What about Jan and Ivan’s weak points, and who’s the most dangerous rider?
Johan: I think Ullrich and Basso are a little bit above everybody else. Ullrich has been our worst enemy of the past several years, and Basso is coming up, he was second last year.

I think their weak pints will be to take charge of the race for three weeks – themselves and their teams of course. I think other team mangers and directeurs have maybe forgotten how hard it is to deal with the pressure of the Tour de France and being the favorite, because the Tour de France is… WAY above every other race. You can not compare it with the Tour of Italy, or the Tour of Spain, or Switzerland or any other race. The race, the competition, the media attention is a lot harder.

I think that Ullrich is in the most difficult situation because Basso has won the Giro, and [even] if he gets second in the Tour, he will have a super season, of course he wants to win. But Ullrich has no other option than to win the Tour – and that’s something that we have been dealing with for the last 6 years, so we know how hard [dealing with that pressure] that is, and I think that’s something we can take advantage of.

Which other rider do you think is the most dangerous?
Johan: I’ll put our gc contenders at the same level as the others. I don’t like to name lists because I always forget somebody, but there’s Floyd, Levi, Menchov, Moureau, Mancebo, Vinokourov… and at that same level I’d put George, Savoldelli, Azevedo, Popovych… I think it will be really open and an interesting race, and I feel really good about this, because if we see all those other contenders, I think we have four of them. I don’t think any other team has that luxury. 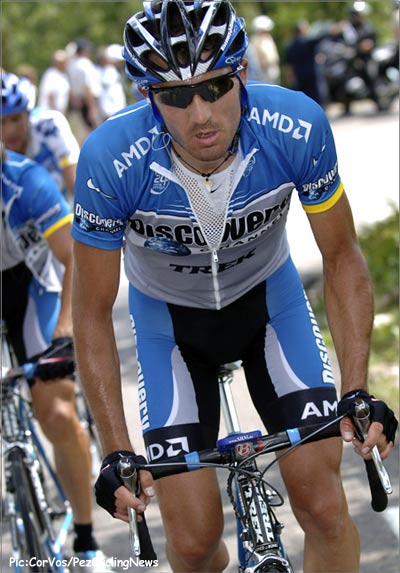 Jaroslav Popovych has scored some great Giro finishes, but is he ready to play in July’s big sand box? Johan says he is.

WHAT ABOUT HINCAPIE?
Of course we wanted to know what Big George had to say, and asked him about his chances, the route, and his prep for what could be his biggest July ever.

When asked about his own thoughts on Bob Roll’s prediction that George will win Le Tour, he said:
George: Of course I dream of it and believe it’s possible, and if not I wouldn’t have been training this hard for the last year. I’ve never been in this situation, so I don’t know how I’ll respond when I’m racing up these big mountains, but I’m hoping for the best and I’m working as hard as I can. Starting the race, I can’t be in better shape than I am now…I’ve done everything I need to do.

How has your training changed for this Tour versus others?
George: I’ve concentrated a bit more on my time trailing, I’ve done all the team camps – in the past I did either the Alps or the Pyrenees, this year I did both the Alpes and the Pyrenees. I’ve been riding my time trial bike several days a week, doing intervals and trying to improve my time trialing and climbing as much as I can. Every year I get a little better at each…

I’m looking forward at the possibility to lead the Discovery team and excited about it.

Pez: What about key stages of the route – where will the race be defined?
George: I think all of the Alpe stages are very hard – we just finished riding them the last couple of days, and it’ll be the last week of the Tour, so by then all the riders will be very tired. I think those three stages will be the decisive ones. And also the two long time trials.

Pez: Do you have your eye on any particular stage that you think will be well suited to you?

George: I’m taking it day by day, this is a new role for me, but right now I’ve got my eye on the prologue.

What About Lance’s role?
Finally, we all wanted to know if the Disco crew would be packing any secret weapons, like say 7-time winner to help dial the channels…

Johan: At this point we’re not 100% sure if Lance will attend, or if he does it’ll be occasionally. But he’s an advisor and I’m in contact with him very frequently, and [he’s] even still involved in certain decisions. I’m not afraid to call and ask for his advice because we have been leading this team together for the last 7 years. On the field his role will be minimal. We spent some time together in Georgia and California in the car, and it was his first experience to see the race form the ‘other’ side. He told me he was very surprised about how things looked when he was not on the bike. He said it was very difficult to analyze how hard or fast something was without being in there every single day.

– Anyway you slice it, this has the makings of the most exciting Tour in a while… so keep it dialed to PEZ!

When Are You Racing The Tour de France?