Interview: How do you design and build a fast track? Ask master track designer Peter Junek. The Aguascalientes track in Mexico was thought to be the fastest track in the World by sprinters and ‘Hour Record’ holder Victor Campenaerts. Now the Bolivian Cochabamba track is looking take that moniker. Who designed and built them both… Peter Junek. 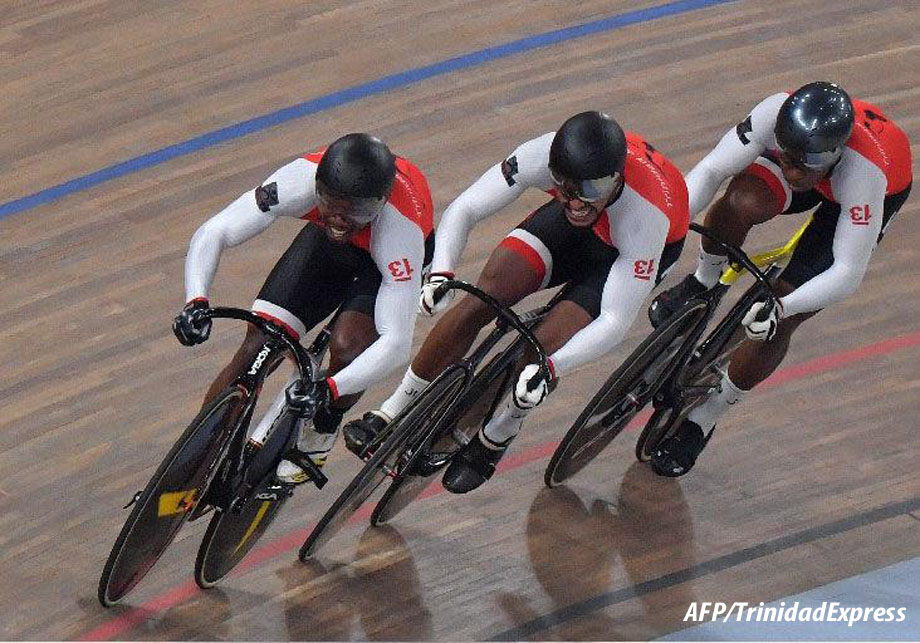 Trinidad and Tobago sprint team on the Cochabamba Velodrome in Bolivia

Yes, it was a good Vuelta. But there are other things happening in the multi-faceted world of cycling. Like the Pan Am Track Cycling Championships on the Cochabamba Velodrome in Bolivia, where Trinidad and Tobago sprinter, Nicholas Paul hacked 0.247 seconds off French flyer Francois Pervis world record of 9.347 seconds set in Aguascalientes, Mexico in 2013 to record a stunning new world’s best of 9.100 seconds.

In the same championships Canada’s Kelsey Mitchell sliced Kristina Vogels ladies’ world record of 10.384 seconds down to 10.154 seconds. And last but not least, former grass track and gravel racer, Ashton Lambie of the USA (and UK team HUUB) took his own world four kilometre individual pursuit record down to 4:05:423 – a time which not so long ago would have won you the world team pursuit title. The Bolivian Cochabamba Velodrome has surely now usurped the previous numero uno World Temple of Speed, Mexico’s Aguascalientes Velodrome. All over the world fast men will be Googling. . . 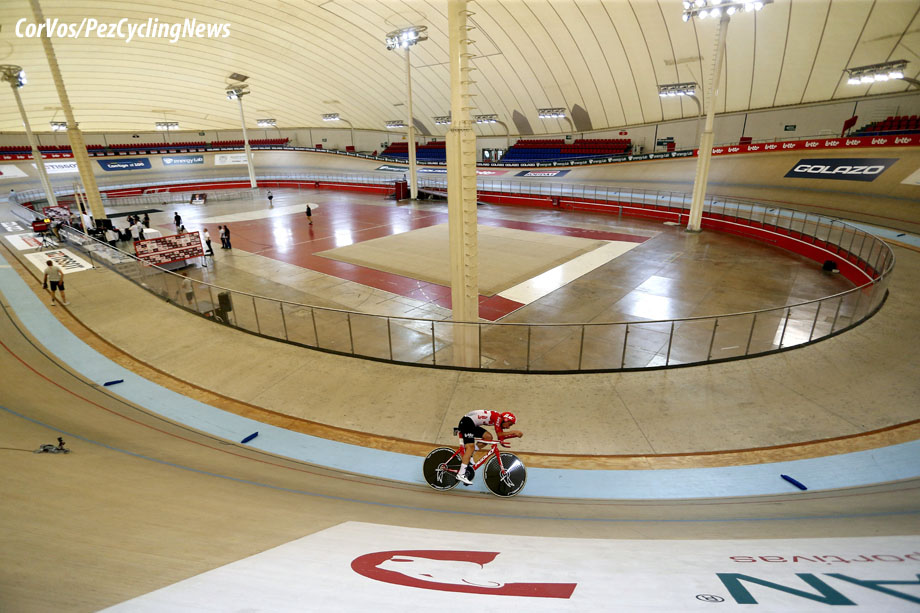 Both tracks have something in common; they were designed and built by the same purveyor of perfect surfaces and geometry, Mr. Peter Junek. PEZ got our introduction to Peter from our long-time friends at Mission Sports Group LLC, Messrs. Mike Engleman and Patrik Lyons who are involved in all aspects of the sport from athlete development to race organisation. They are representatives of Peter Junek and hope to be involved in the creation of one of his gems in the USA before too long. Here’s what Peter had to say to PEZ just days after the orgy of speed in Bolivia. 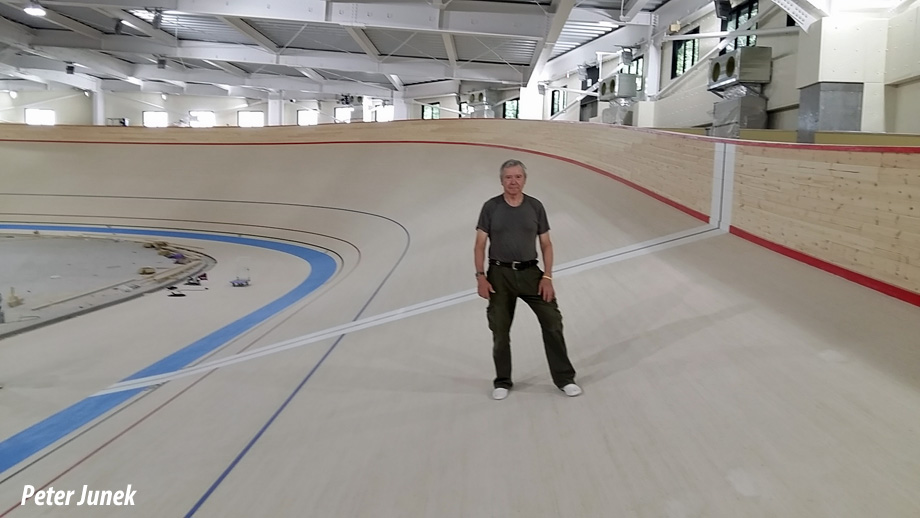 PEZ: Were you a track rider earlier in your life?
Peter Junek: I first raced on a velodrome when I was 17 years-old and I’m still racing occasionally some 60 years later.

PEZ: Tell us about the Czech/Canadian nationality?
In 1968 I was on the Czech national speed skating team racing in Austria. Czechoslovakia was invaded at that time by the Red Army and we decided with my wife to immigrate to Canada. The waiting time then to go to Canada was three days; to the USA it was nine months. 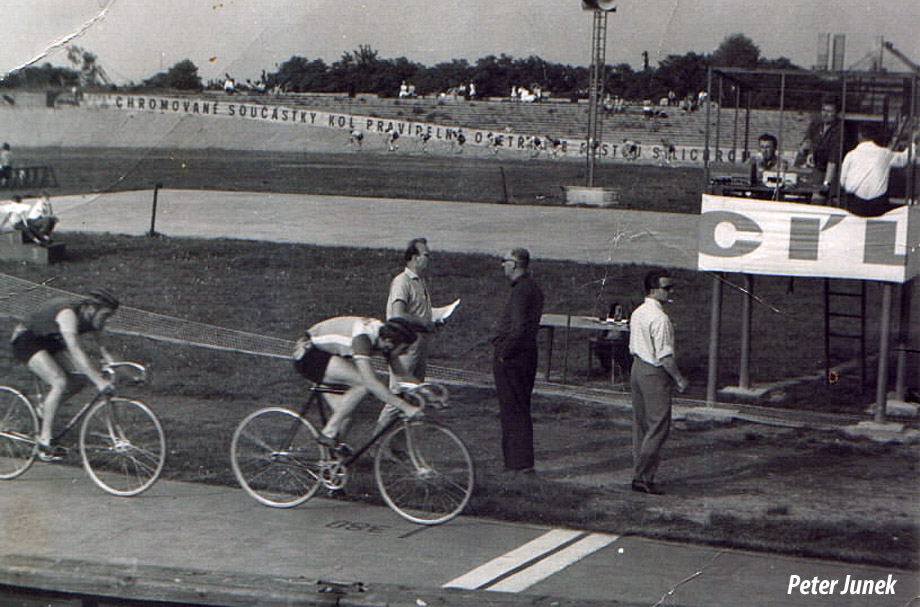 PEZ: How did you get into building tracks?
In 1971 two British former bike racers and I founded a cycling club in St. Catharines, Ontario.
The club became very successful; Karen Strong won World championships silver and bronze in the 3 km pursuit, Gordon Singleton won the professional Worlds Keirin and silver in sprint in 1982-3. Steve Bauer won road silver at 1984 Los Angeles Olympics, was third the same year at professional world road championships then went on to ride the Tour de France many times including 10 days in yellow jersey. Besides those successes there were many Pan Am medals and national champions. I was coaching the club for track racing on a traffic circle at a local university. We were asked to stop so I built an outdoor plywood 125 meters velodrome with help of club member Paul Nemy, a local wood roof truss manufacturer in Fonthill, with our own money. There are still some Fonthill Velodrome videos on YouTube. [St. Catharines is the club that PEZ Toolbox editor, Stephen Cheung Ph.D, belongs to, and also Fonthill is exactly where he lives, about 2 km away from where the velodrome used to be.]

PEZ: So that was your first track?
Yes, Fonthill velodrome in 1990. Then I built a 166m. track in Hamilton, a 200m. track in Quebec, a 250m. track in New Brunswick and a 250m. track for the 1999 Pan Am Games in Winnipeg. While building it a group from Samsung Engineering Co. came from South Korea to see this construction, because they had a contract to build 333m. and 250m. velodromes for the Korea national training centre in Young-Joo. I signed a contract, built those velodromes and the business expanded from there.

PEZ: How many since then and do you have a ‘favourite’?
That will be 33 if I count the small tracks. My favourite is the one I am building or designing at the time. I met Theo Bos (multiple world champion and sprint record holder) recently while building a 250m. track in Izu Keirin school, Japan. He is very experienced track racer and considers the velodrome in Sangalhos (Anadia, Portugal) as the best in the world. I built that one in 2009. But he did not have a chance to ride in Aguascalientes or Cochabamba yet. 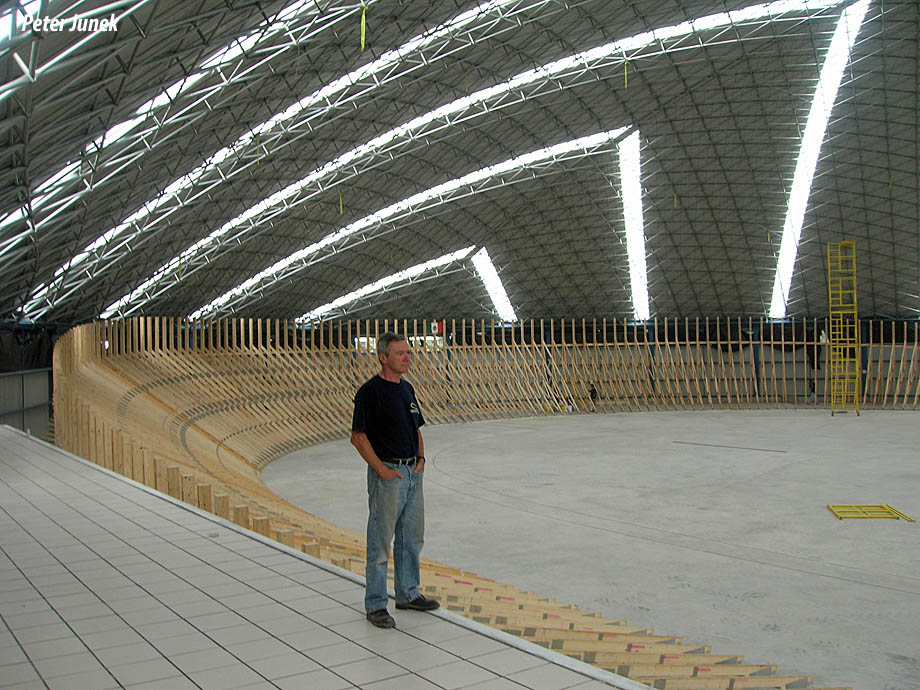 PEZ: What timber do you use – and how do you know it’s properly seasoned?
We use engineered wood called ‘LVL’ [‘Laminated veneer lumber’ is an engineered wood product that uses multiple layers of thin wood assembled with adhesives, ed.] made in Finland. We use ‘Masterplank’ by a company called KERTO. All pieces are absolutely uniform in strength and moisture content. We use it for same reason we don’t use skis made from one piece of wood anymore. Also, NO SPLINTERS!!!

Mike Gilleran, owner of McCausey Specialty Products (Michigan) our LVL supplier, was the only one to trust me and helped me to develop this new velodrome surface technology. Laminated wood does not split and we can use 700,000 nails – one nail every 6 inches or less – to create strong and fast track surfaces. (Other velodromes only use 280,000 nails). For our last velodrome in Japan, we used 600,000 of 3 inch and 4 inch stainless steel wood screws instead of nails. It’s another improvement.

PEZ: What do you think of plywood tracks?
It’s OK for a cheap track, but there’ll be no records; flexibility absorbs energy. Durability outdoors is a problem, too. 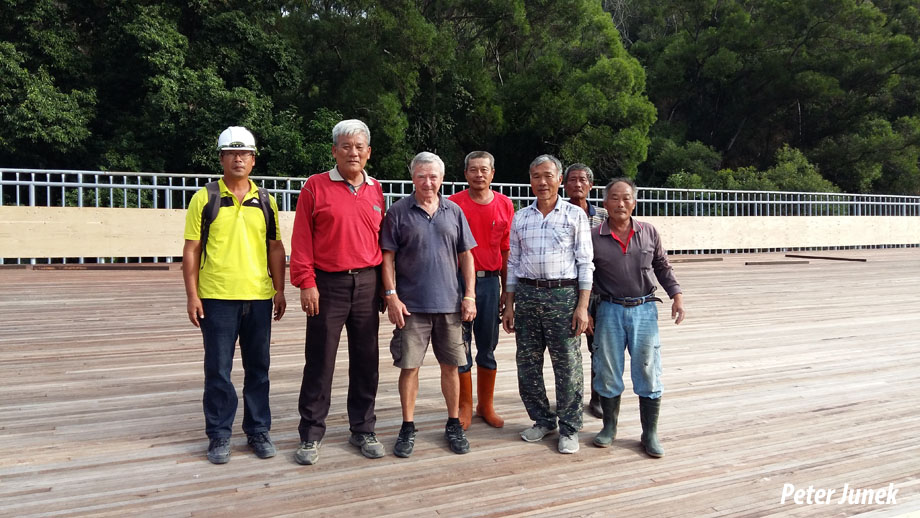 PEZ: Do you have dedicated specialist carpenters – how do you guarantee build quality?
Most velodromes I build with me personally supervising a local crew of carpenters. It’s hard work to teach them; working with them 8 – 12 hrs. per day. But preferable for me to dealing with logistics and sometimes difficult local regulations for imported workers. I can produce a faster velodrome surface this way than some other velodrome builders with their own specialist carpenters.

PEZ: Why aren’t all 250 metres the same shape?
It would be boring, besides different designers design different tracks. For better or worse… 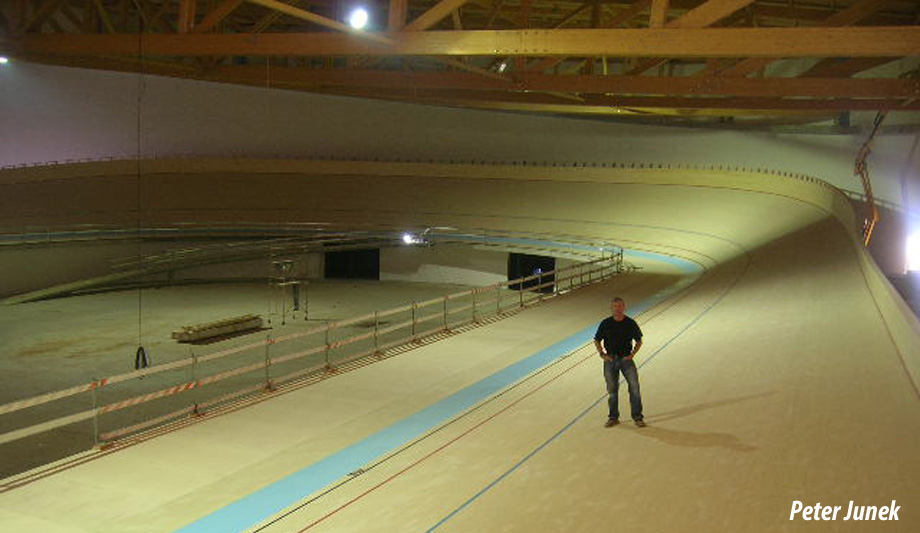 PEZ: Have you ever built a concrete track?
Concrete tracks are dinosaurs, for many reasons; you can’t make them smooth in 250 m size, they’d be too steep. For outdoors I have a new invention: non slip, extruded aluminium strips velodrome surface, on galvanised steel structure. Cheaper, portable, fool proof construction, sellable, recyclable. 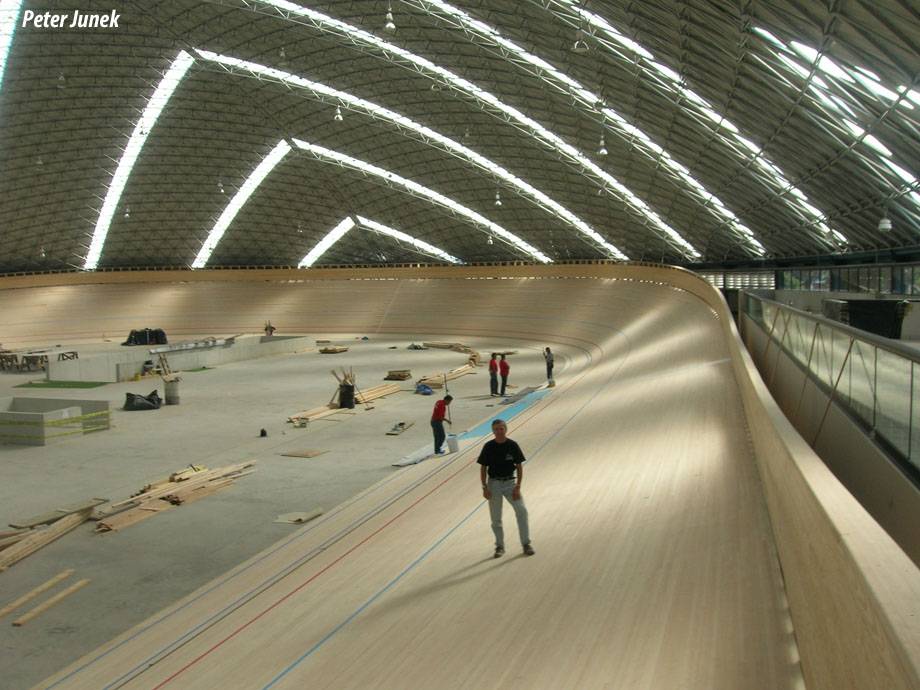 PEZ: Are there “Golden Rules” of track design and building?
Nobody knows them but Ralph Schuermann and me. It took me thousands of hours to think about it, thousands of laps on velodromes and substantial financial risk and sacrifice to figure it out and be in this business. But it’s all for sale at a price…

PEZ: Cochabamba seems to be the “new Aguascalientes” – it looks very wide, why is it so quick?
It is 7.1 meters wide, like most velodromes. It is quick because of 2600 meters altitude, fast velodrome surface and most of all – proper track geometry. 9.1 seconds for 200 meters is 79 km/hr. and this speed is possible only on track with very good transitions and turn geometry.

PEZ: Aguascalientes – is it true that the air pressure in there can be ‘adjusted’?
The Aguascalientes arena is an inflatable, air supported structure – a bubble. To hold the roof up requires higher air pressure than outside air pressure. This neutralises somewhat the high altitude advantage of this track. To adjust air pressure down is nonsense, arena would collapse. Air pressure can be adjusted only up and it is no help for speed. 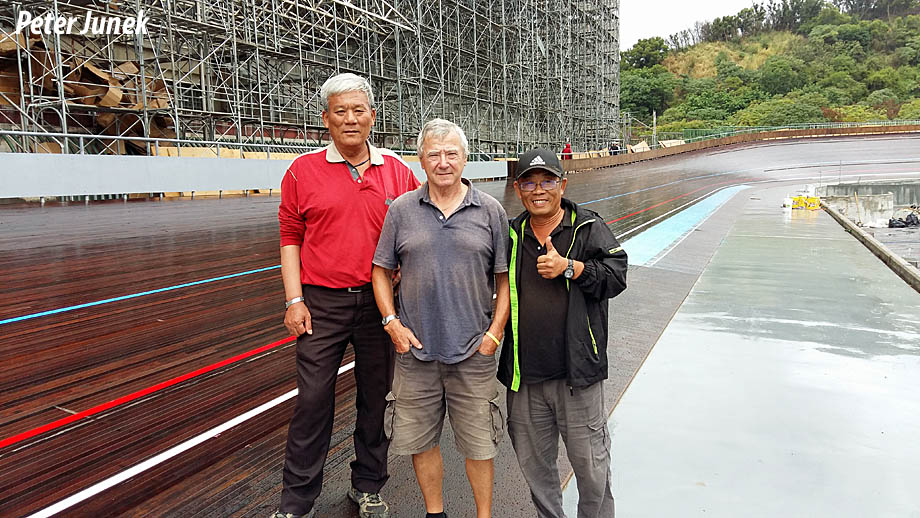 PEZ: What’s on the drawing board?
Another indoor 250m. velodrome in Japan for the Keirin organisation. It’s interesting that the JKI – Japan Keirin Institute – who run the whole betting system may be scaling down from large outdoor tracks to 250 meters indoor tracks. Indoor 250m. track in San Juan, Argentina; the building is going up now. Indoor 200m. track in Asker, Norway. Indoor 250m. track in Taiwan. And I’m looking for client for an outdoor aluminium track anywhere.

# With thanks to Peter, Mike and Patrik # 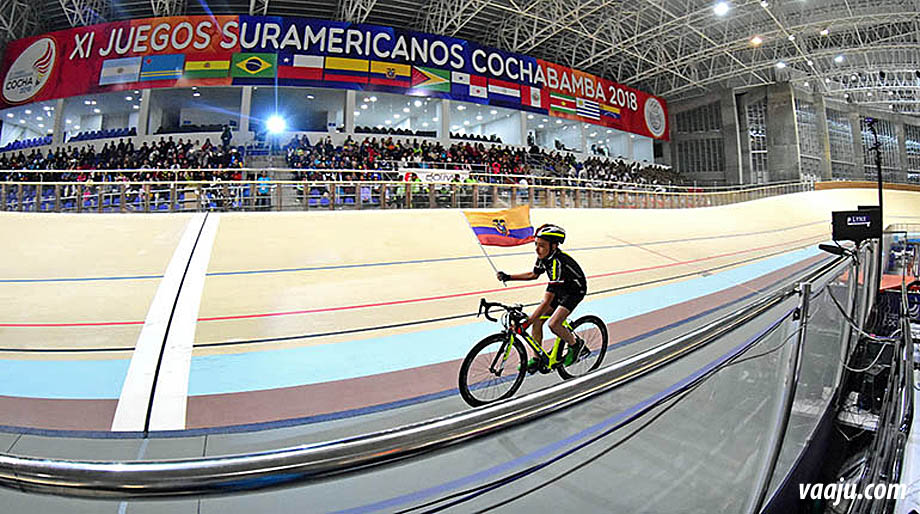