Interview: As the 2019/20 ‘6 Day’ season winds down, one of the top men has announced his retirement from the boards… and he’s only 28 years old. Moreno De Pauw – 6 Day, Worlds, European and National title winner, the list goes on. Ed Hood caught up with Moreno after his final ‘6 Day’ in Berlin. 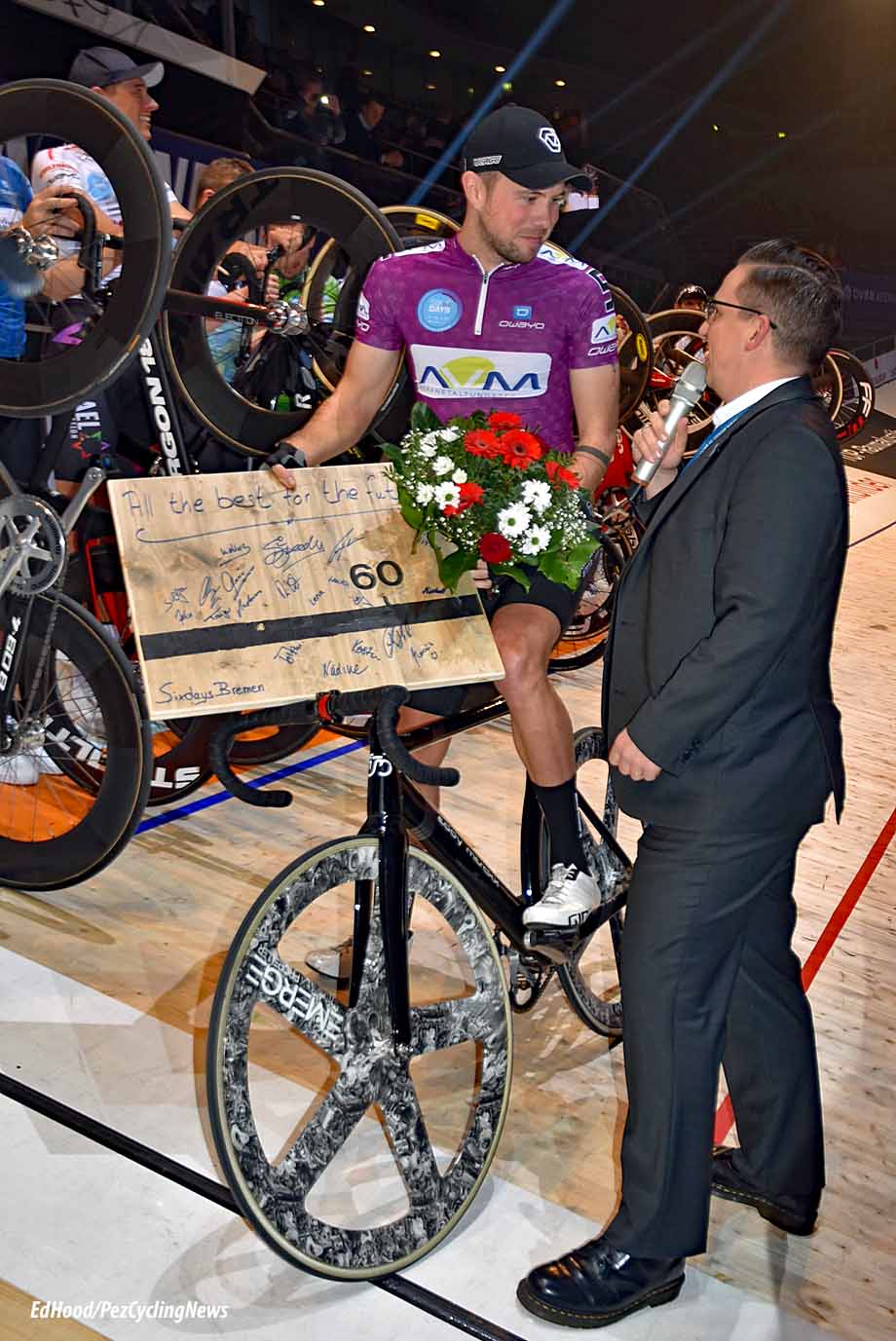 There’ll be a popular name missing from the six day lap boards come the winter of 2020/21, that of Belgium’s Moreno De Pauw, at just 28 years-of-age he’s decided to call ‘time’ on his career and join the police. We felt we couldn’t let this pass without speaking to the man from Sint Niklaas in East Flanders – Heartland – who we’ve watched take so many laps from London to Copenhagen and all points between.

De Pauw has only ever ridden for the various incarnations of Pro Continental team Topsport Vlaanderen (who else?) since he turned pro in 2015. Over the years he’s been a prolific collector of championship medals – 28 Belgian titles and too many Belgian championship silvers and bronzes for us – or him – to keep track of. In his time he’s won national titles in the Elite kilometre, scratch, omnium, madison, points and elimination before we even consider novice and junior titles. Then there are the European and Worlds medals. . . 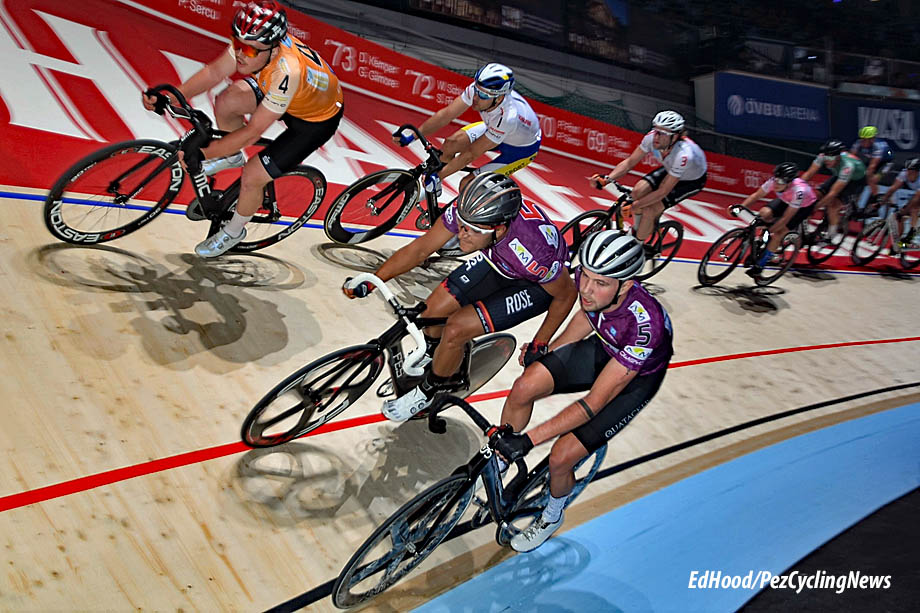 We started off by asking: “Why be a track man Moreno, back in 2006 when you took your first Belgian title, the novices sprint – not to mention silver in the novices pursuit and bronze in the novices 500 metre TT – didn’t every Belgian youngster want to be Tom Boonen, who’d won The Worlds in 2005 and was Belgian Sportsman of the Year?”

Moreno De Pauw: When I was 14 my local team held a track day at the Kuipke Velodrome in Gent, I went with my grandparents. After five minutes they were worried because they couldn’t see me on the track – but I was riding up at the balustrade already. That track has so much history and I feel in love with it immediately. 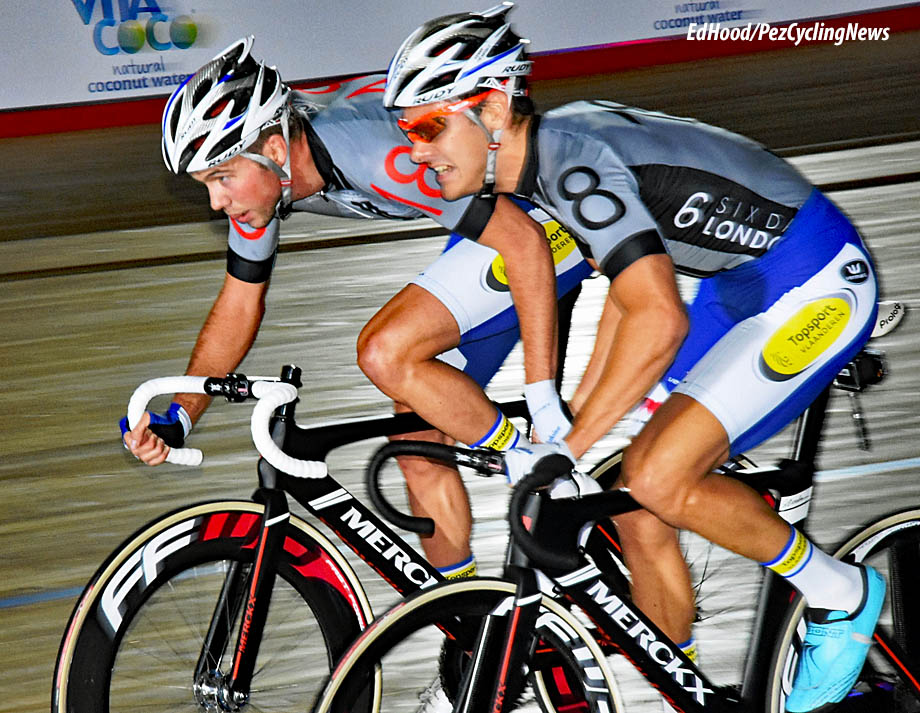 PEZ: But you’re only 28 years-old, aren’t you worried that maybe in a year or two’s time you’ll think, ‘I quit the sport too soon?’
Maybe but I think not, I started racing when I was eight years-old, I’ve had enough, I’m mentally tired, last season I set myself the target of one more year and I don’t think I’ve made the wrong decision. 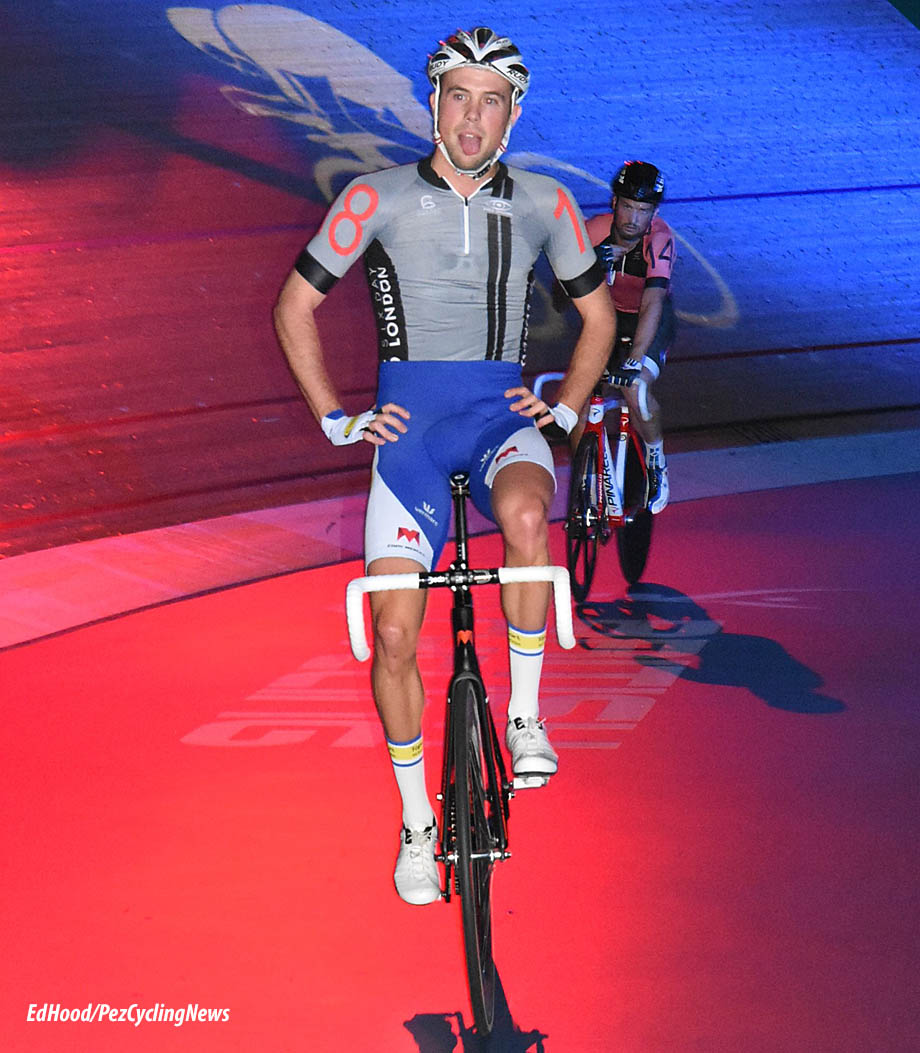 PEZ: And you’re joining the Belgian police force?
Yes, I’ve done two of the tests already with two more to do – I like the thought of being in a job where you help people and there’s a lot of variation, there’s desk work but a lot of action too. 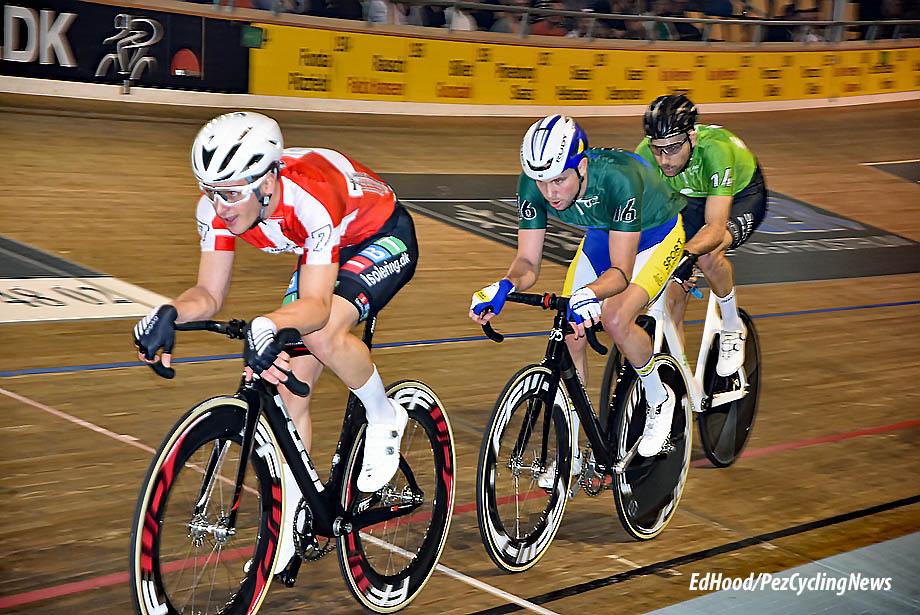 PEZ: You’ve won 28 gold Belgian championship medals, how about bronze and silver medals?
Ha! I’m afraid I don’t know how many of those I have!

PEZ: Is there any one title which stands out as favourite?
Not really, they’re all special when you race and win in front of your home public. 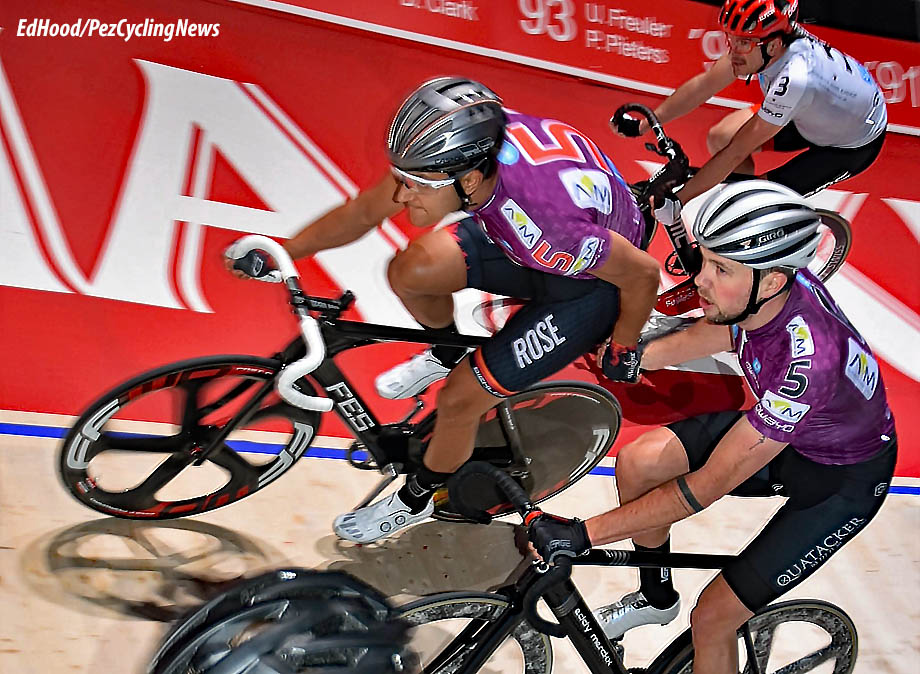 PEZ: There are European and World Championships medals too?
At the Worlds in 2008 in South Africa I took silver in the junior omnium behind the Aussie, Luke Davison and then in 2017 I won a bronze with Kenny De Ketele in the Worlds madison behind the French guys Kneisky and Thomas. There were two European bronzes, the u23 team pursuit with the Belgian squad in 2012 behind Denmark and in the madison with Kenny in 2016 behind the Spanish guys Mora and Torres. 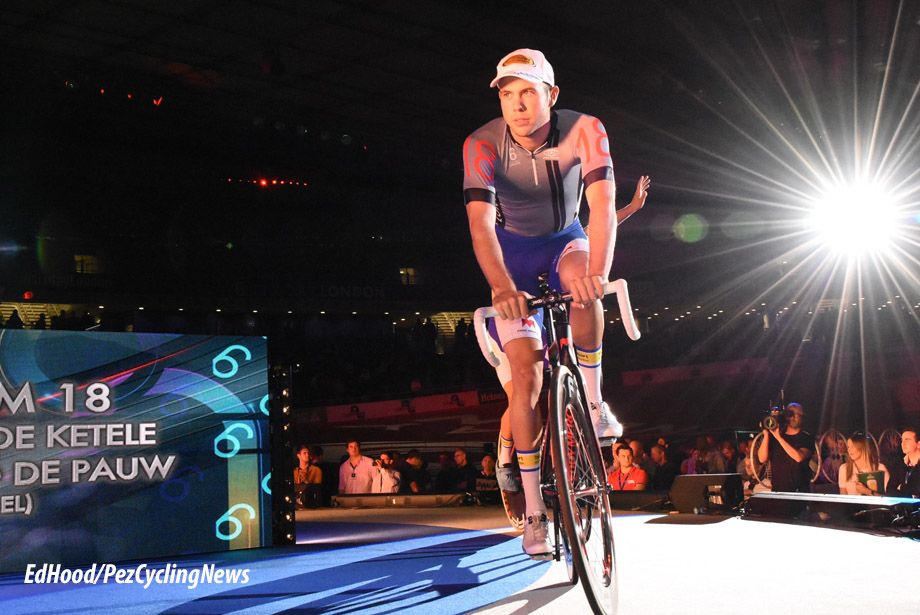 PEZ: You have eight six day wins?
Yes; Amsterdam, Berlin, Copenhagen, Gent twice, London twice and Rotterdam.
That’s off 26 or 27 starts, I haven’t kept count of podiums but I’ve been on the podium in Berlin, Gent, London. . . 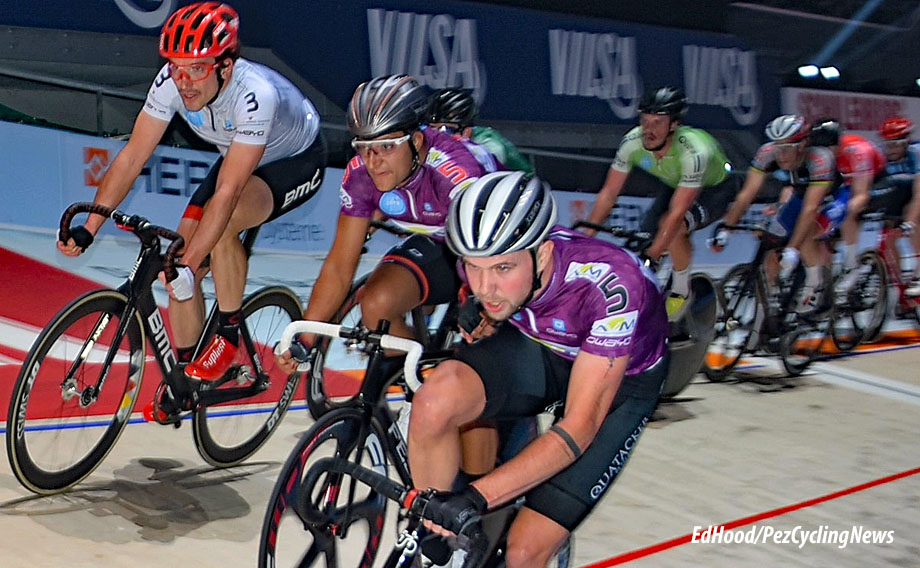 PEZ: Your favourite?
Gent of course, Rotterdam is a good race too but it’s very special to win in front of your home, Flanders public in the Kuipke with the music pumping, the atmosphere and the history the velodrome has. 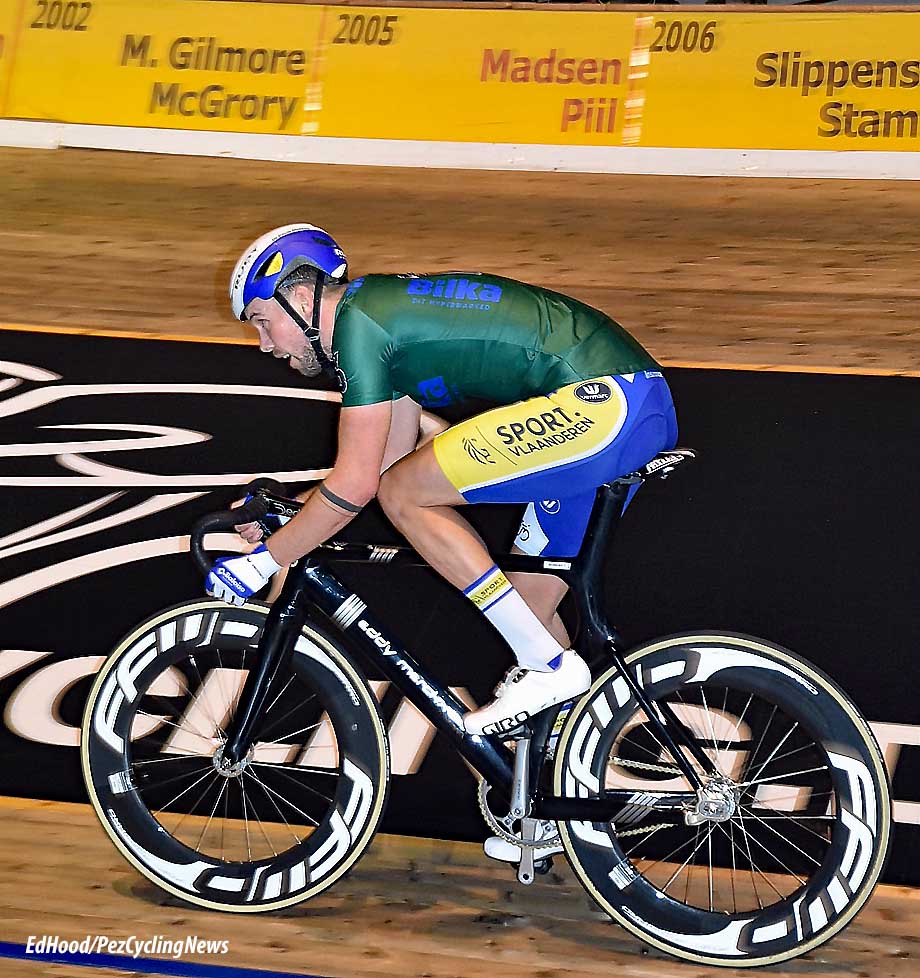 PEZ: Gent is solid but what do you think about the general decline in the six day scene.
I didn’t race in the ‘old days’ when it was ‘house full’ every night in places like Berlin – but they still get good crowds there. In London they had Cav and Viviani – and that’s what the public want to see, the big road guys. Not necessarily a lot of them just a few and the rest of the fields made up with good track riders. 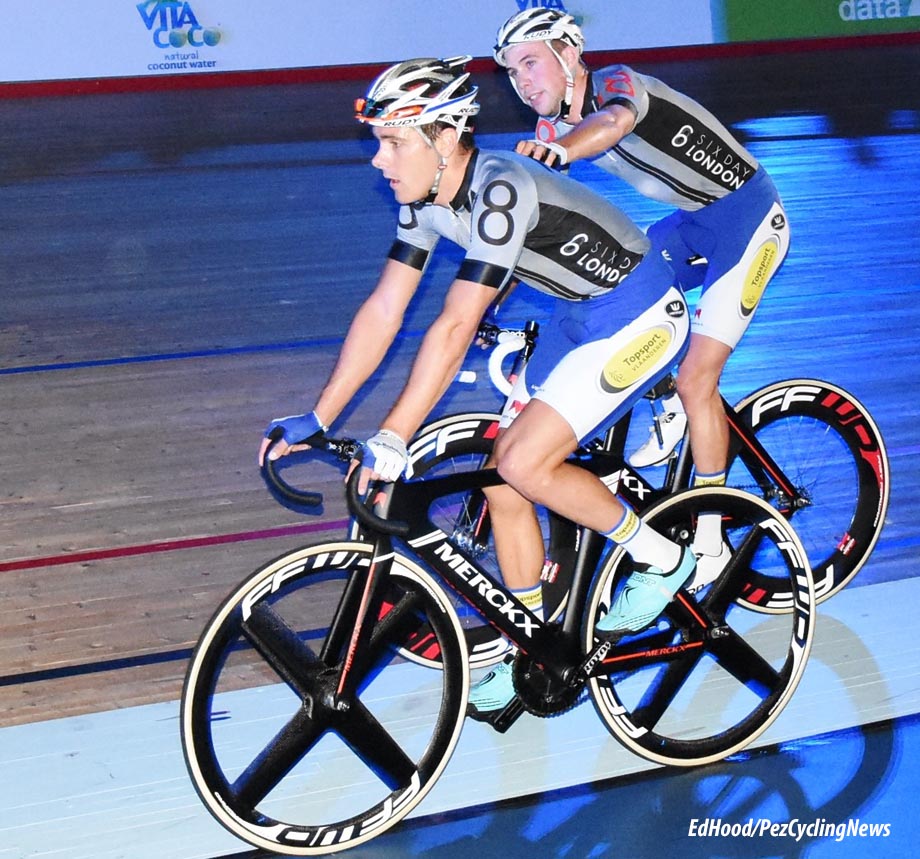 PEZ: Your career hi-lites?
Two of the biggest are when Kenny and I broke the one lap [166.67 metres] and 500 metre records at the Kuipke in the Gent Six Day in 2017 with 8.43 seconds and 26.595 seconds respectively; we were flying, the music was pumping, the atmosphere was incredible, it was truly memorable. When people talk about me, they say; ‘he’s that guy De Pauw who’s the fastest-ever around the Kuipke!’ 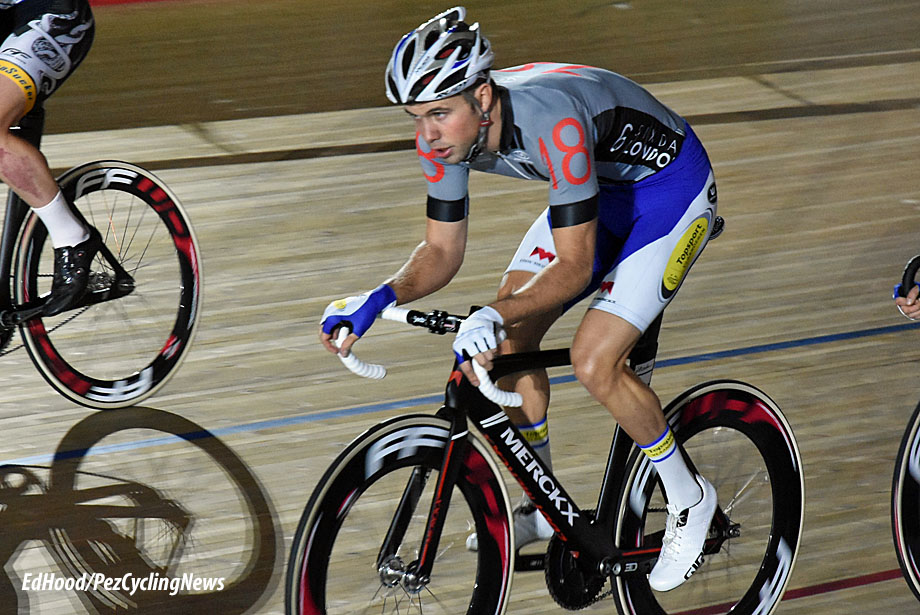 PEZ: What are you going to miss most about the six days?
The relationship with the other riders; on the boards when you race, you’re enemies but you’re together for most of the winter and in the hotel and when you’re not racing you have a beer and share laughs. 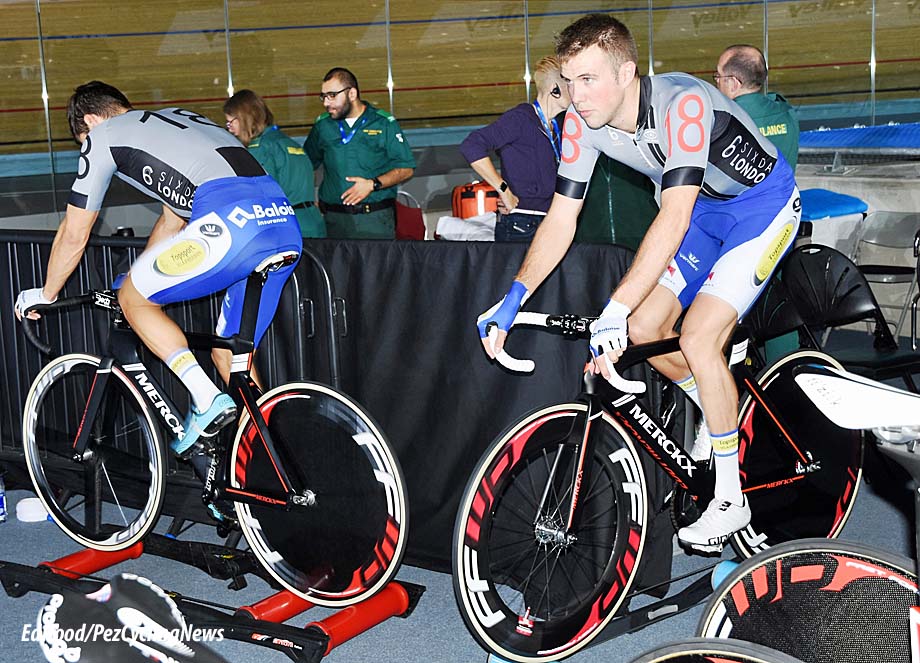 PEZ: What does the future hold for Belgian six day riders now you’ve gone?
Kenny De Ketele will go on for several more years and there are young guys like Jules Hesters, Rob Ghys and Lindsay De Vylder coming up, I think the future is secure. 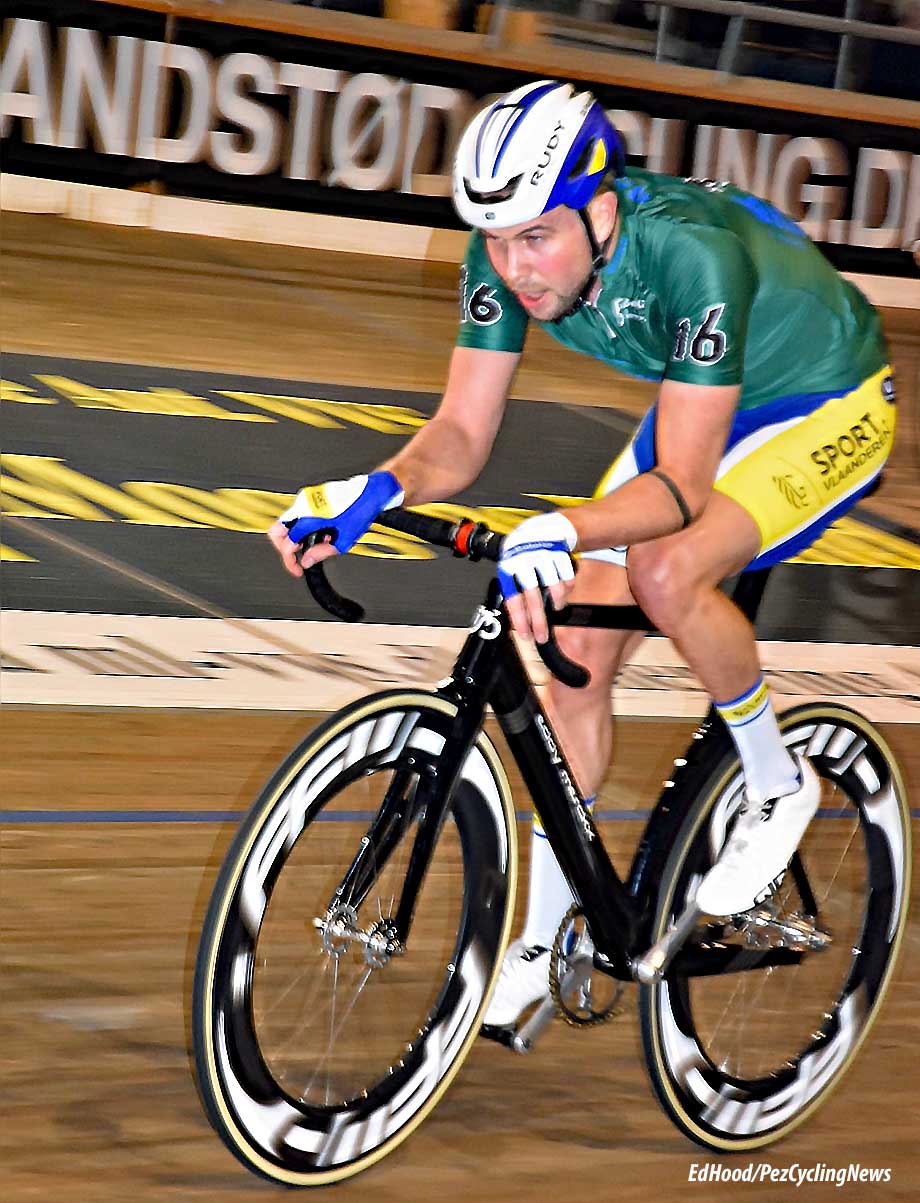 PEZ: What are you going to do with all that time when you used to train and race?
I’ll spend time with my daughter but I have to work of course – I didn’t earn enough during my career not to work after I stop racing. And I want to develop other talents in my life – and ride my bike for fun. 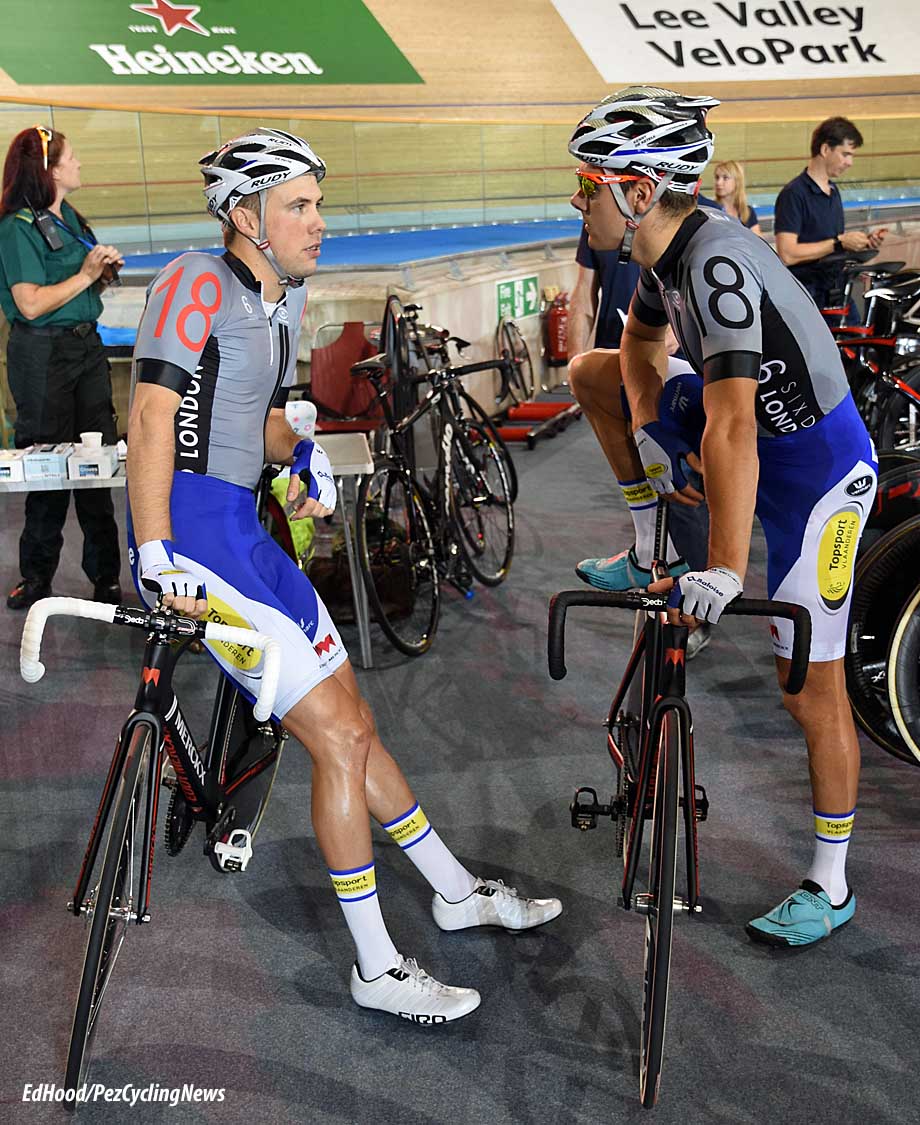 PEZ: Regrets?
No, I’m proud of my achievements on the bike, I’ve enjoyed great sensations during my career. I would like to have won a world title, if you can make the podium then you can win but that wasn’t to be. 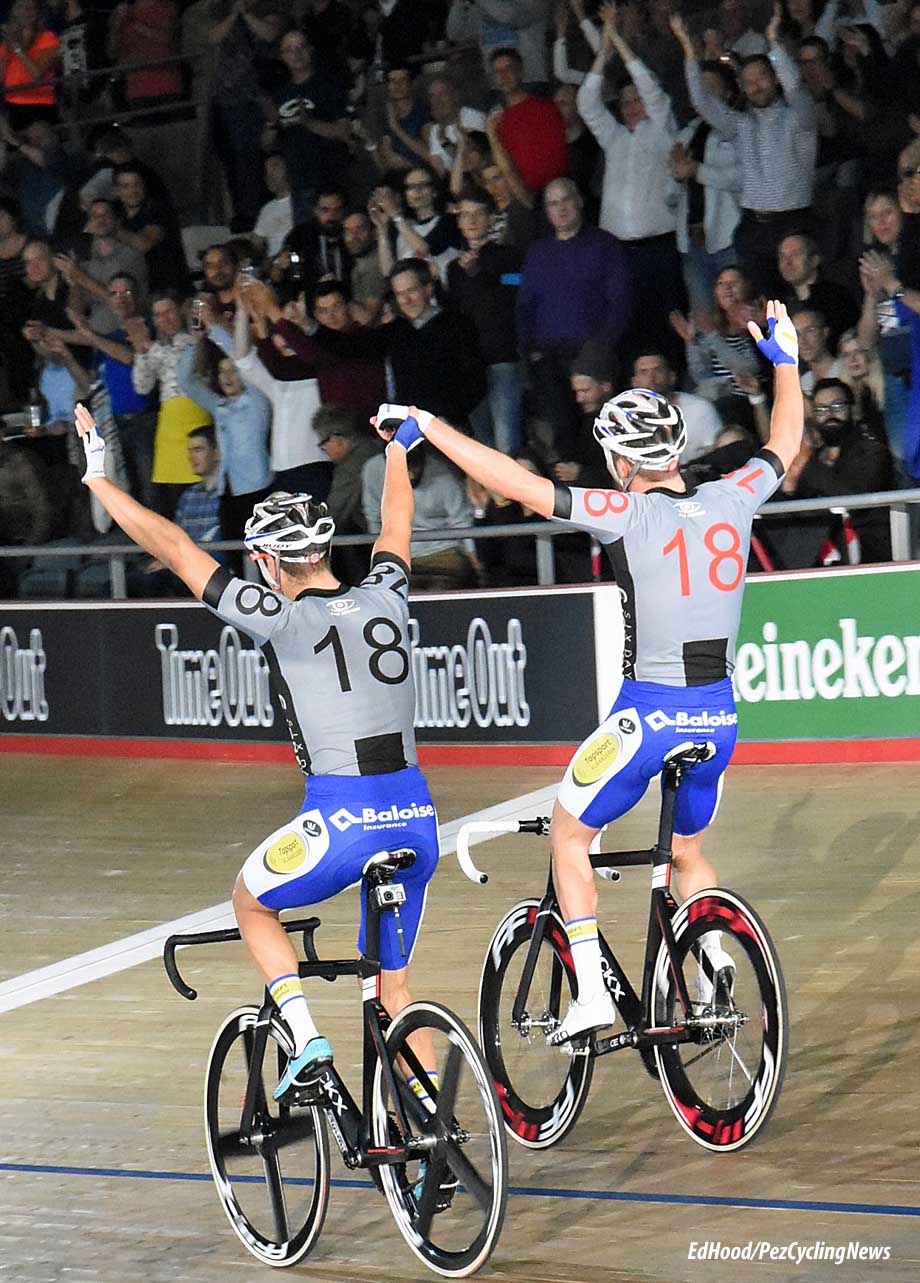 Ed on the Boards: Three Nights in Copenhagen