Rider Interview: With the likes of Remco Evenepoel, Mathieu van der Poel and Wout Van Aert hitting the headlines, a new young British rider has landed himself a stagieire place and a two year contract with Trek-Segafredo. Charlie Quarterman is fast, as he showed in the National 10 mile TT championships – Ed Hood asks the questions. It’s been a big week for 20 year-old Oxford man, Charlie Quarterman; he won the British 10 mile time trial championship, promoted under Cycling Time Trial rules and just days later it was announced he has a stagiaire ride with Trek-Segafredo for the remainder of 2019 running through into a two year contract.

I’s not his first time in the big leagues, before he joined his current Zappi team – run by irrepressible Italian ex-pro Flavio Zappi – he spent two seasons with Luxembourg continental team, Leopard. We ‘had a word’ with Charlie soon after the announcement was made. PEZ: Stagiaire and a two year contract with Trek – wow! How did that come about?
Charlie Quarterman: After a successful few months ending with the U23 Giro and winning the u23 TT National Championships, I got a bit of attention internationally, as well as from some of the top-end agents. There is one agency in particular that is connected to Flavio Zappi, who runs my current team, so when I started to pick up some results and make some performances, they got in touch, and they got to work straight away with it. Within a couple of weeks, I had a couple of offers on the table.

PEZ: When’s the first get together with the new team?
I don’t know about any of the team camps yet, but this weekend I’ve got two one-day races with the team (Brussels Cycling Classic and GP de Fourmies, ed.) so I think that will be a really nice opportunity to get to know some of the riders, the staff, and just how the team works.
I can’t wait to get going!

PEZ: You must be looking forward to getting your hands on a sleek Trek TT bike?
Yes! I’ve ridden some really nice bikes over my time but it’ll be really exciting to have the top end of everything that Trek has to offer! PEZ: The CTT ’10’ mile TT champs did you prepare specially for it?
No, not really. It’s part of my preparation for the World championships, so I’m definitely coming into form, but I rode a pretty hard week of training coming into it. It’s quite rare that I’ll come into a TT in the UK when I’m fresh though. I ride a fair few local ones, so I can’t spend my whole life tapering!

PEZ: How did you pace the ride? Can we ask what your watts were for the ride?
It was a pretty stiff headwind on the way out, so I really had to push for that and try to hang on for the way back. Unfortunately I was having a bit of an off-day, so my pace dropped off before I got to the turn-around point, and so the way back was just hanging on the best I could really. PEZ: You didn’t ride the CTT 25 mile champs – why not?
I’m actually slightly scared of doing a ‘25’ for some reason, especially when it’s on a road as dangerous as the one for this year’s national champs. For a TT on open roads, there were several factors that made it not worth doing for me, really.

PEZ: Tell us about your championship bike please – gearing, tyres, ceramic bearings, waxed chain?
I ride a Giant Trinity with SRAM eTap, 58×11 top, I didn’t put my waxed chain from WattShop on for the National ‘10’ actually, just a standard one for this. No ceramic bearings. PEZ: You also won the 2019 u23 British National TT Championship but haven’t had much chance to show the jersey off?
No, and I won’t be able to ride with it next year either! I’m planning on doing the Chrono des Nations U23 in October, so I’ll get to wear it there at least. I have secretly worn it in local TTs though… You have to, don’t you? PEZ: Tell us about how you got the ride with Leopard and what was your time there like?
That came about after sending out emails to every team in the book as a junior, something that people who, like me, had limited contacts at that point, will know the feeling of. It was a really professional setup and I did some incredible races with the team where I learned a large amount of what I now use, but when you’re racing against super-experienced pros every week and you’re in a continental team with similar riders to yourself, opportunities can be hard to come by. I definitely don’t regret my time there, but a move away was definitely necessary. PEZ: Tell us about your Zappi ride?
Although it was a step back down, it was a pleasure for me to re-join the team that it all started in for me. Flavio Zappi himself is an inspiration and I was given the freedom and support to make things happen in the team. I also got used to eating salad every day, which is no bad thing! 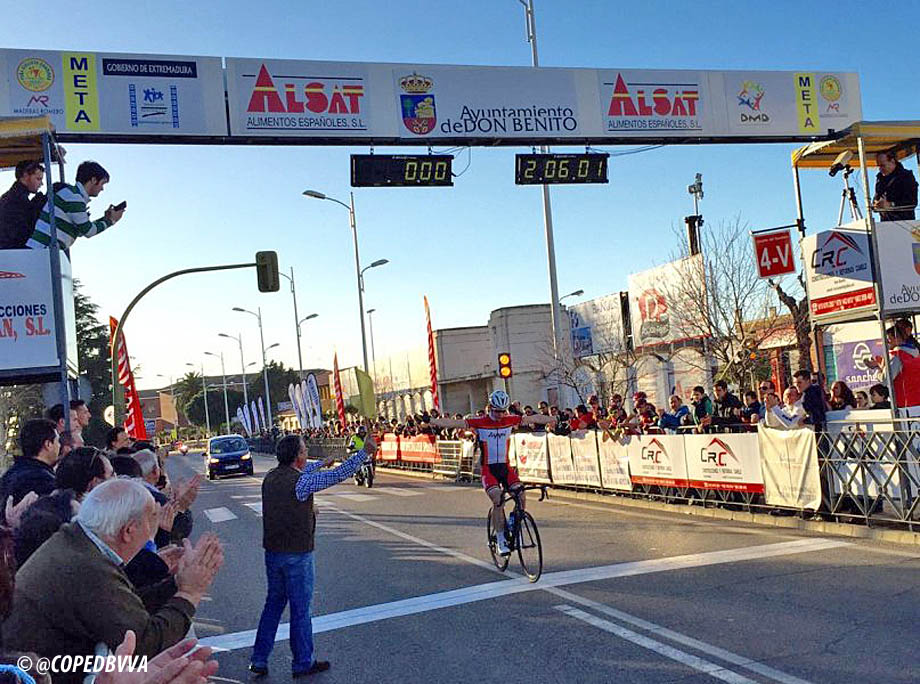 PEZ: What happened in the Baby Giro, this year, you were third on Stage Seven then DNS next day?
Yes, I felt surprisingly strong that day. Everything seemed to go right for those hours and suddenly I had some belief that I had somewhat been lacking for the few stages prior. I managed to put out one of my best efforts after a week of racing and after 100km of a tough stage already completed, but I obviously had to go deep to do that. Let’s just say I felt the effects of these efforts straight away after the stage and my condition deteriorated all through the night… PEZ: Next up you have the Brussels Classic and GP de Fourmies – in at the deep end. . .
Yes, I can’t wait to get on the start line with the team in these races. I don’t feel too scared after my experiences with Leopard, but I will definitely feel the pressure after I get all the support from the Trek staff and I have the same kit as some of these ‘machines’ on me. I’m in a good shape, so I’m hopeful I can do a good job for me and for the team. PEZ: How do those races fit in with your u23 World TT preparation?
I’m starting for that reason actually. As well as just to get a taster before I work towards the top-level races next year, I’m looking to use this weekend to give my fitness a boost ahead of the final TT work. I should have some recovery time before I’m flying. PEZ: Do you have a coach – what’s the ethos?
Yes, I’m coached by former classics monster, Paris-Roubaix winner, Magnus Backstedt. The work is technical but it doesn’t have to be too clever. We just go for honest, hard work a lot of the time, and that is something that I have always found works best. We just seem to click in that respect. PEZ: What’s 2020 about?
Obviously I will have a huge amount to learn, and a big jump to make in terms of fitness, but I am also hoping to get to the level quickly and repay the team for its belief in me. I think I’ll be starting some of the shorter stage races and taking some of the classics, which is slightly scary but I am just incredibly excited to get going! 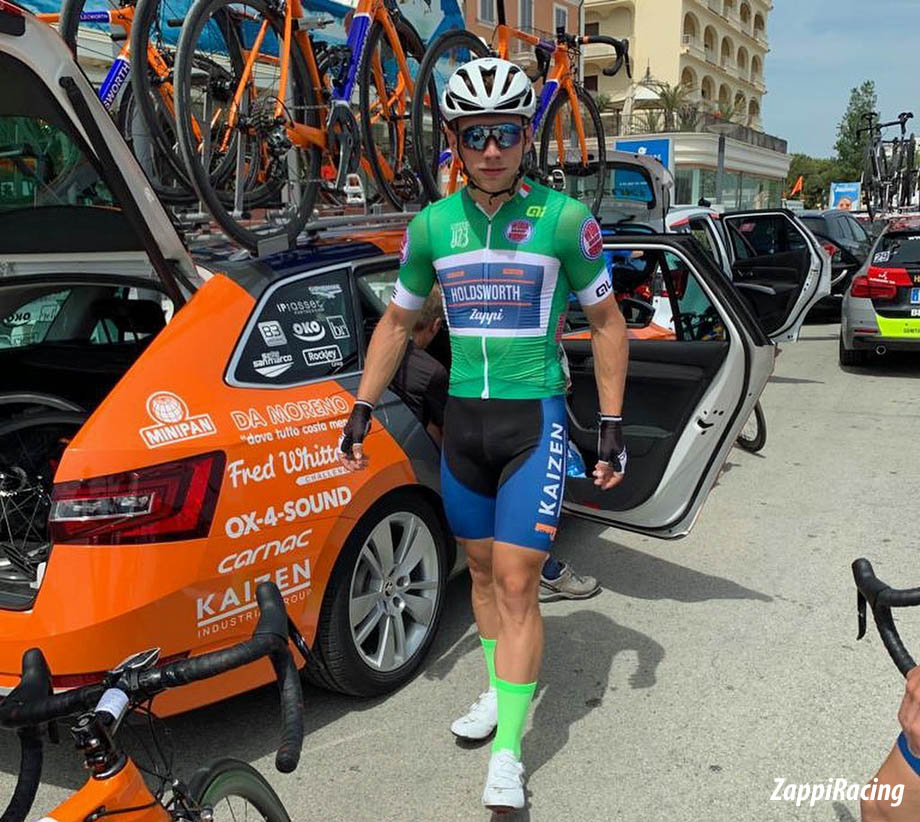 # We wish Charlie ‘all the best’ for the rest of this season and 2020; we’ll be keeping our eye on those results columns for him. #

Charlie does some yoga