Rider Interview: Ed Hood has been keeping eyes on the ‘up-and-coming’ young riders and couldn’t help but notice Luke Lamperti, current US Criterium champion, especially when he took a win on Ed’s Scottish door-step. Lamperti is not just a ‘crit man’ he has also some top road race performances. Ed caught up with the 19 year-old at home in California. 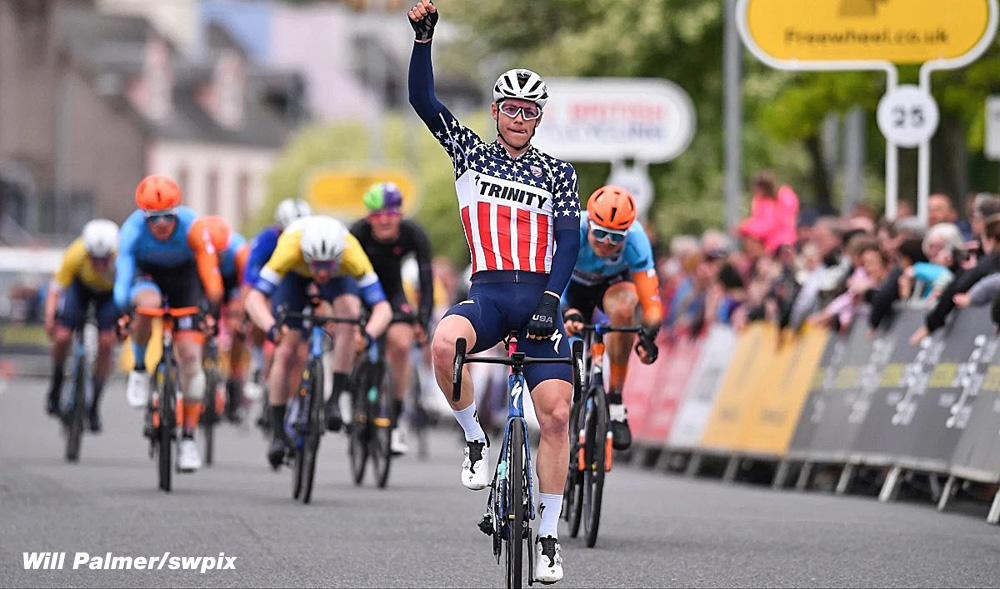 When I noticed that 19 years-old US Elite Criterium Champion, Luke Lamperti riding for the British continental team, Trinity Racing had won the Lincoln Grand Prix, I thought; ‘he’d be an interesting man to talk to.’ Then when I saw he’d won the Stranraer round of the Tour Crit Series right here in Bonnie Scotland, I thought; ‘I really must catch up with this young man.’

It took a few days; he had to drive through the night after his Stranraer win to catch his flight home to California where he lives in Sebastopol, a city in Sonoma County, north of San Francisco in the heart of, ‘the wine country.’ He’s the youngest ever winner of the US Elite Criterium Championship at just 18 years-of-age and in winning the Lincoln Grand Prix – apart from the Tour of Britain, Britain’s only UCi race for male riders – he adds his name to a role of honour which includes legends like Albert Hitchen, John Clarey, Phil Edwards, Mark Bell and Malcolm Elliott – with race ‘record men’ on four Lincoln wins each, Paul Curran and Russell Downing – and best not forget that Scotland’s Brian Smith took the honours in 1990. 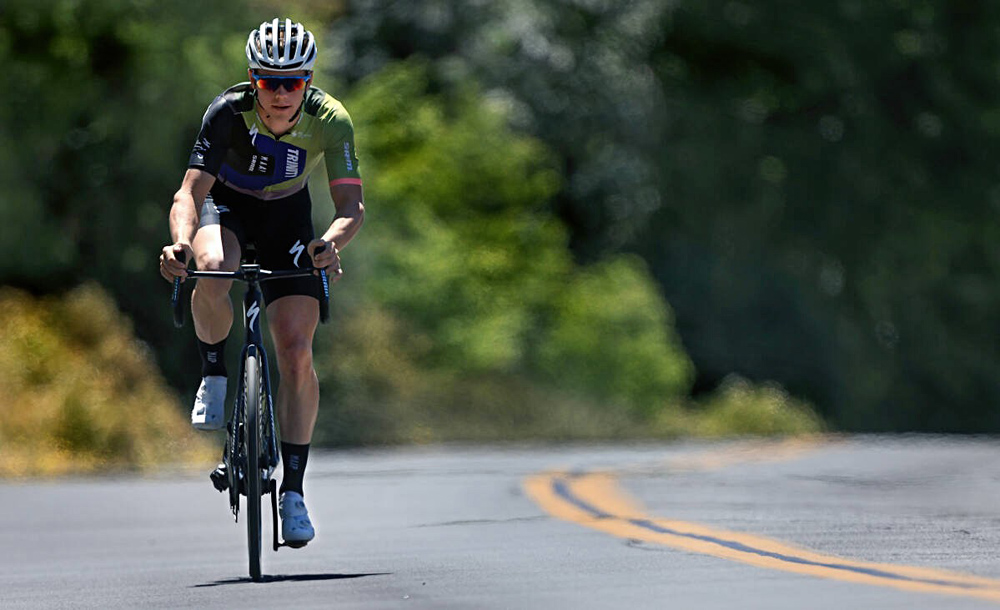 PEZ: We opened our chat by asking how Luke got into cycling?
Luke Lamperti: I raced moto-cross when I was a kid and used to ride a bike as part of my training for that, there was a slow switch to bike racing from the moto-cross around when I was 10 or 11 years-old – but moto-cross was a good grounding for bike racing, you’re on two wheels and going fast!

PEZ: How come a US guy on a British team?
Andrew McQuaid who has been my agent since I was a junior is the man behind Trinity Sports Management so with that connection and the support from Specialized bikes it was the natural thing to join Trinity, the team language is English and that’s another plus. I’m back in the States right now but when I’m in Europe I’m based in Girona, Catalonia. 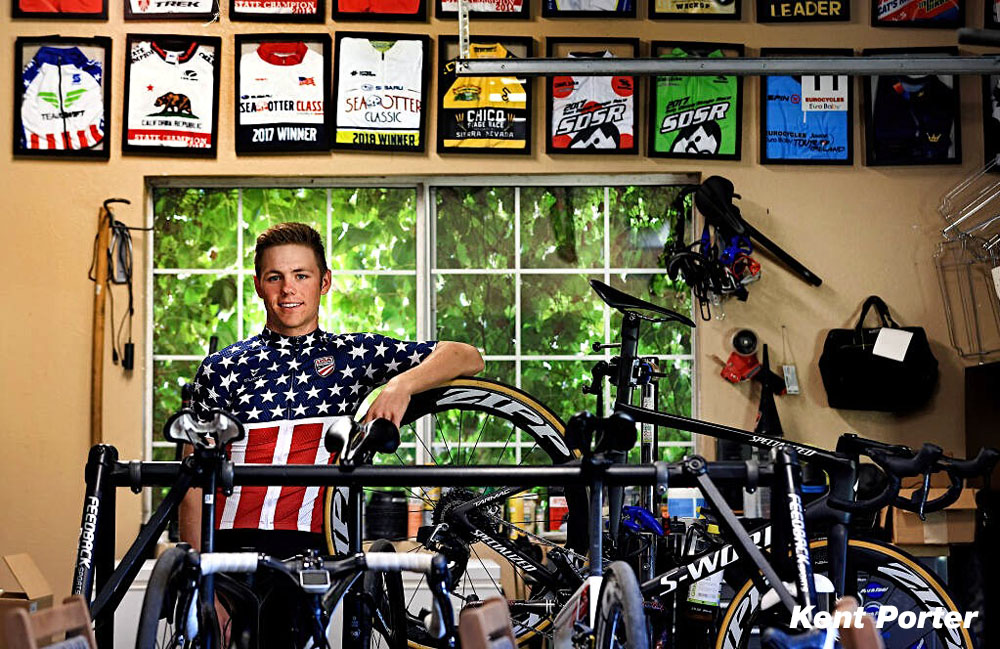 Luke Lamperti at home in California

PEZ: Sunny California to British rain, how have you taken to the weather?
I’ve been lucky in that the British races I’ve ridden have enjoyed good weather – there’s been a bit of rain before and after but none of the horror stories the guys on the team have told me about.

PEZ: The Lincoln GP with that Michaelgate climb, not one you’d associate with a crit. specialist?
LL: I wouldn’t say that I was a crit. specialist, the Lincoln Grand Prix is very much like a Belgian style race, which I enjoy. The team was determined to get in all the moves; we had four in a move of nine then four in another move of 15 but both times they came back and there were a lot of attacks before it was together coming in to the last time up the climb to the finish – I went for it from the bottom of Michaelgate and held it to the line. 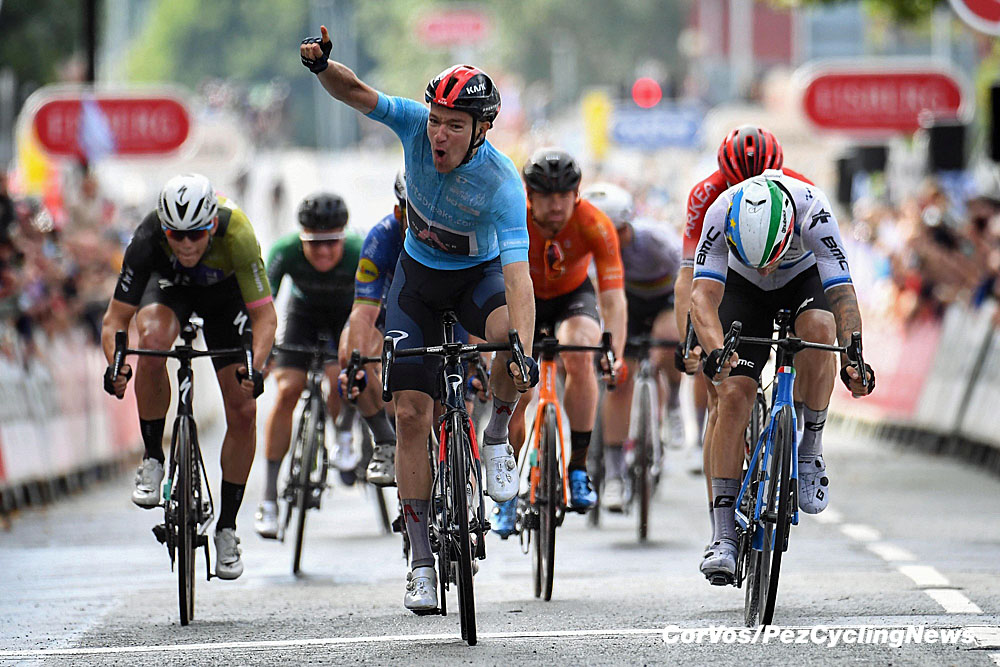 PEZ: You had a nice stage placing in the Tour of Britain last year, among the fastest guys.
I was fourth on Stage Five into Warrington, Ethan Hayter won from Giacomo Nizzolo and Dan McLay with me in fourth spot, it was pretty hectic but I got my way up there.

PEZ: To win the US Elite Criterium Championship last year you beat all the US specialists, in particular the L39ion of Los Angeles team; heavy duty crit. riders.
Those guys are specialists but there are also guys like myself who are capable riders but don’t make a science of riding crits. so as well as watching the ‘pure’ crit. guys you have to be alert. After the race some of the crit. teams expressed interest in me and spoke to me a little here and there – but I explained that I was happy with Trinity and wanted to continue to ride a u23 Euro programme. 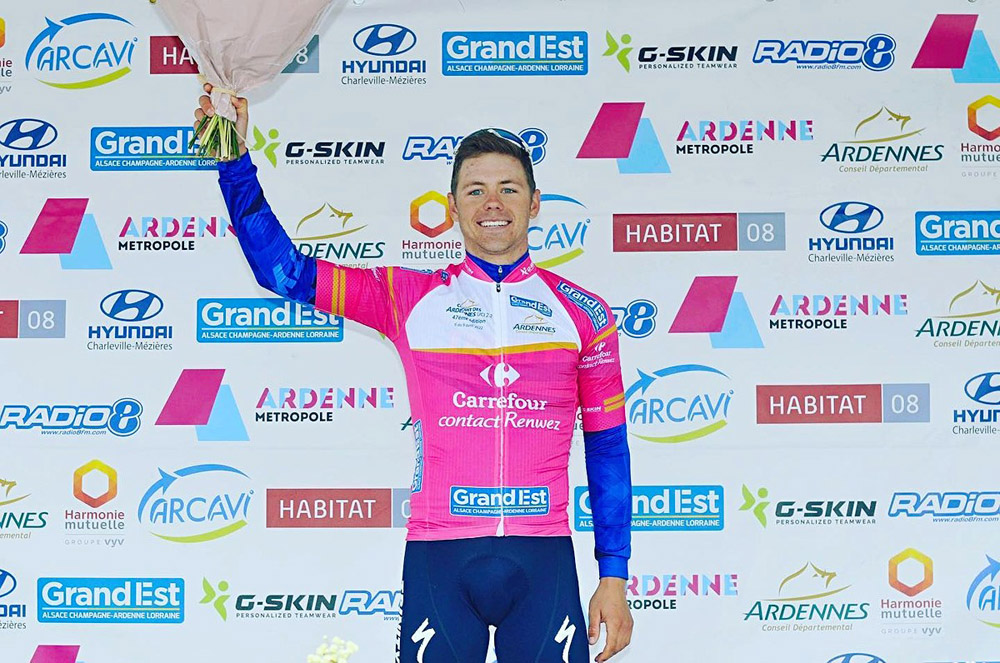 PEZ: How would you describe yourself as a rider then?
I think I’m versatile, my aim is to do well in Belgian style Classic racing but I’m still developing as a rider so it’s too early to say exactly what kind of rider I’ll end up.

PEZ: You had a block of Belgian UCi 1.1 racing last year, races like GP Kint and Druivenkoers, how was that?
I’d had some knee issues and was cramming those Belgian races in to get fit for the Tour of Britain, it wasn’t ideal but I do enjoy the Belgian style of racing. 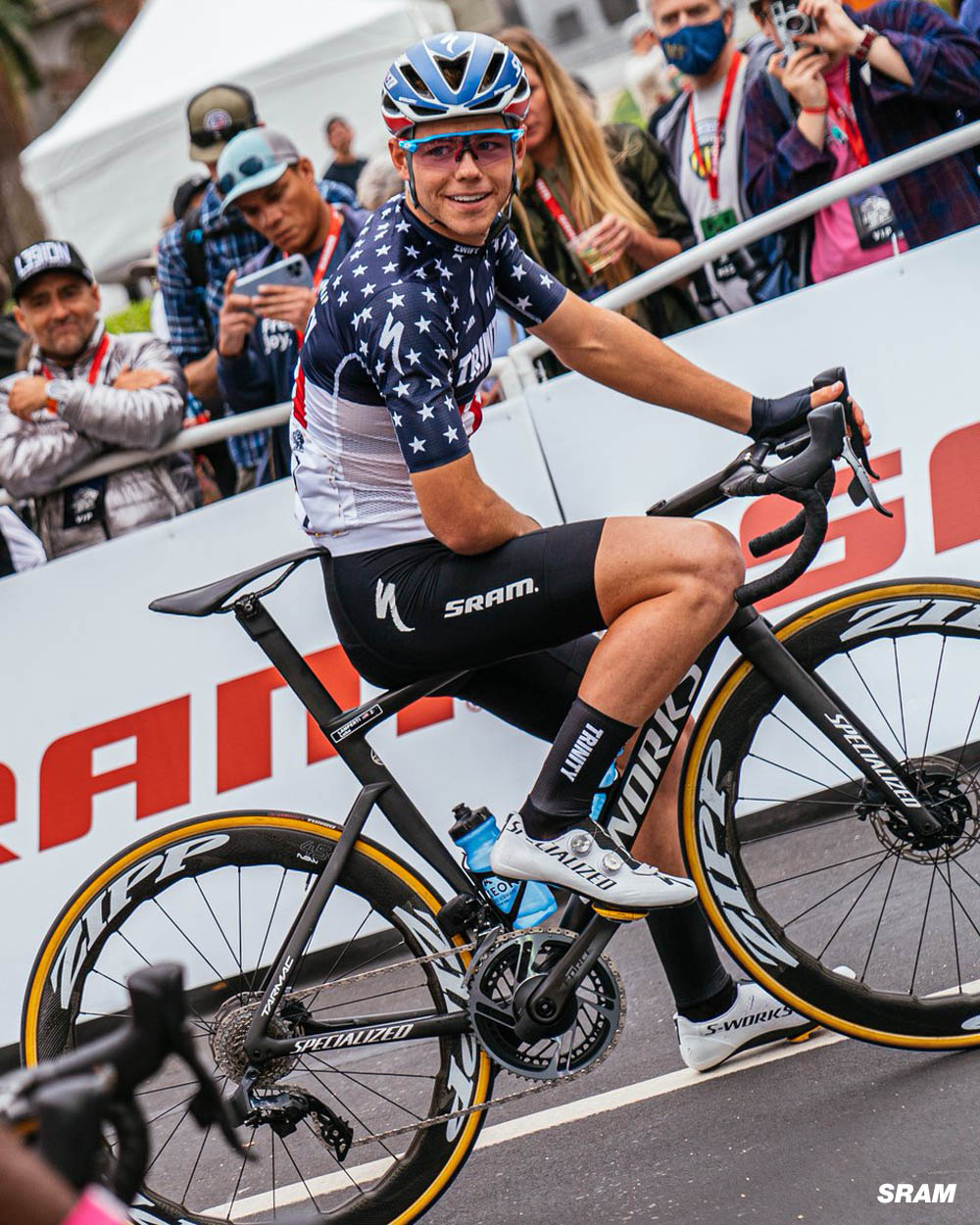 PEZ: The u23 Worlds in Flanders last year, you crossed the line in 10th place but were declassed, what was that about?
There was an incident at the top of one of the bergs with 70 kilometres to go, I collided with a Belgian guy, it was just a racing incident, he came off and I guess someone had to get blamed so the Belgian commissar declassed me after the race.

PEZ: A Worlds top 10, did that stimulate any approaches from the big teams?
Not too much and like I said, I’m happy where I am at Trinity.

PEZ: Peter Kennaugh is your coach, himself a man won the Lincoln twice, I see he said of you; ‘Really proud of Luke, he’s a pleasure to coach.’
Yes, his training plan is a real mix, intervals, group rides, fun but serious when we need to be – I think I have a good balance in my training.

PEZ: What’s next on the agenda?
I have some US criteriums coming up, including the ‘Tulsa Tough’ weekend of three high profile, very competitive criteriums in Tulsa Oklahoma. Then there are the US Elite crit. and road Nationals in Knoxville, Tennessee – after that I’ll be flying back to Europe.

PEZ: What are your goals for the second part of the season?
I really want to build up to the u23 Worlds in Australia, I want to have consistent results towards getting selection for and riding in Woolongong. 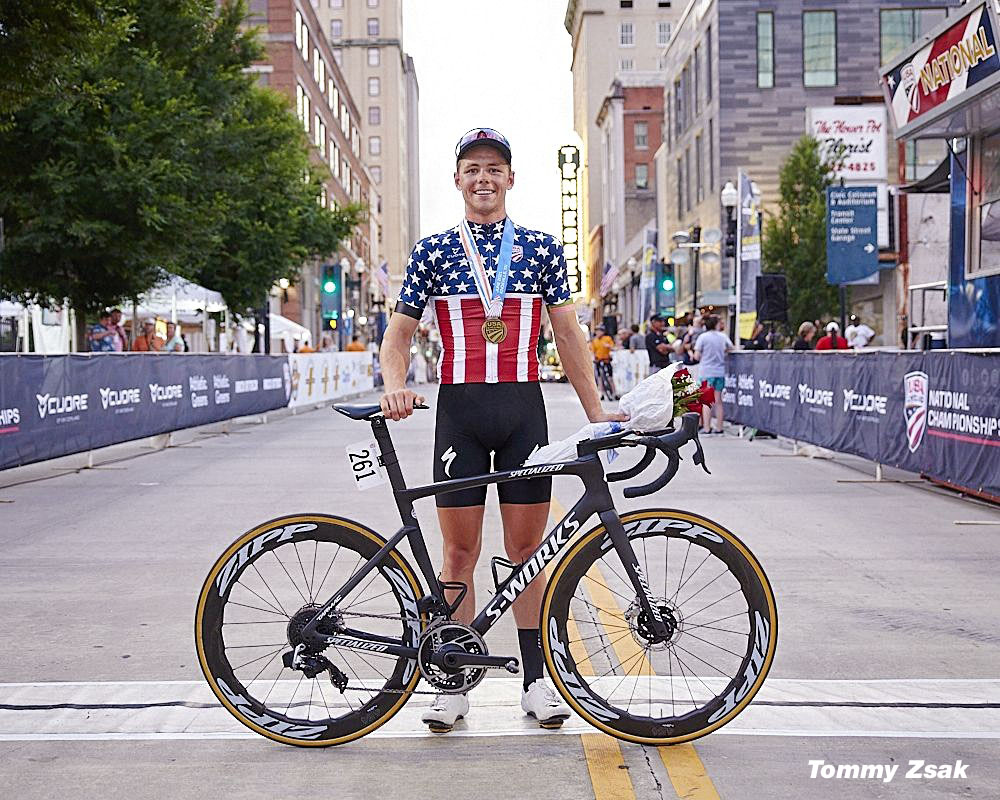 # Best of luck to Luke, the next US ‘young gun’. Thanks to the photographers known and unknown. #

Unique Things You Can Bet on in Cycling