Tyler Farrar Wins – And Gets Pez’d!

He’s won stages in races as diverse as the Valley of the Sun in the US, Tour de l’Avenir, Tour de Delta in Canada, Tour du Poitou-Charentes in France, Correios de Portugal and the Tour of the Bahamas. But today he moved into the major league with a win in one of the most important stage races in the sport; Tirreno – Adriatico – and he beat the world’s fastest in the process! 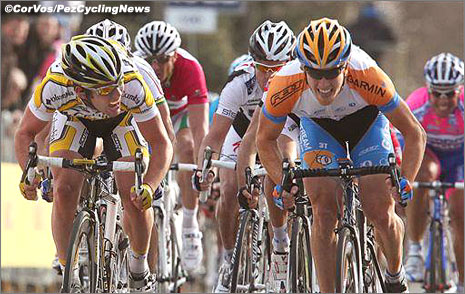 Here’s something Mark Cavendish doesn’t recognize – someone actually passing him at the line.

This was no win from a breakaway; it was a full scale burn-out with the fastest men in the world – Cavendish, McEwen, Petacchi, Hushovd, Hunter, O’Grady and Boonen were among those he left in his jet wash.

We caught up with the 24 year-old from Wenatchee in Washington State soon after his triumph. 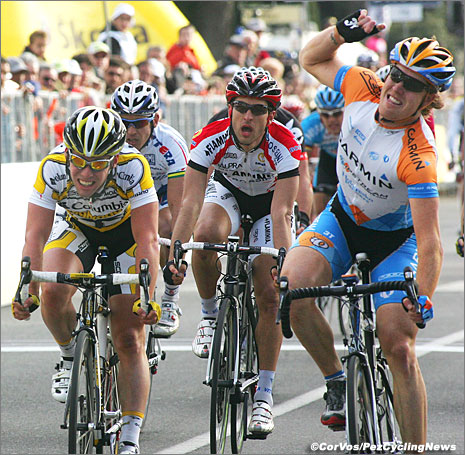 Pez: Your best ever win, Tyler?
Tyler: Yeah, I’m incredibly happy; I’ve won stages here and there in minor stage races, but this is the first time I’ve beaten riders at this level – the best guys in the world.

Pez: Talk us through it.
Tyler: The team did a great job; they took me to where I needed to be – Martijn Maaskant did a huge spell and took me right up to the lead out trains; Julian Dean did great work for me, too. I was right on Cavendish’s wheel into the last turn and I came past him at the line.

I’ve had good form in the sprints over the last four weeks but not had the good positioning; in the Tour of California I was getting fourths and fifths, but I just wasn’t in right place and didn’t have that little bit of luck. 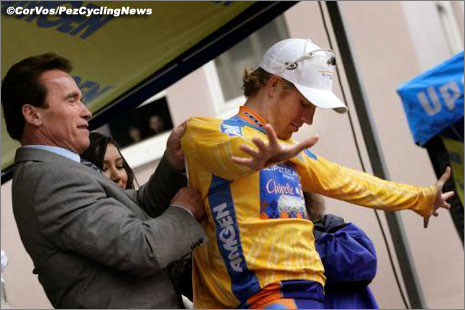 Tyler gets some help pulling on the Leader’s jersey at 2008 Tour of California.

Pez: It sounds like you’re not a ‘train’ kind of sprinter?
Tyler: It certainly helps; if you have a train it increases the odds of you of being in the right place at the right time. The Garmin train is a work in progress just now, but we’ll get there.

Pez: What type of sprinter are you; McEwen-style, get in the wheels and come late?
Tyler: No, I don’t have his ‘snap,’ I prefer it to be long and fast; today it was a tail wind and it was just so fast for the last few kilometres – it was down to who could keep it going longest. 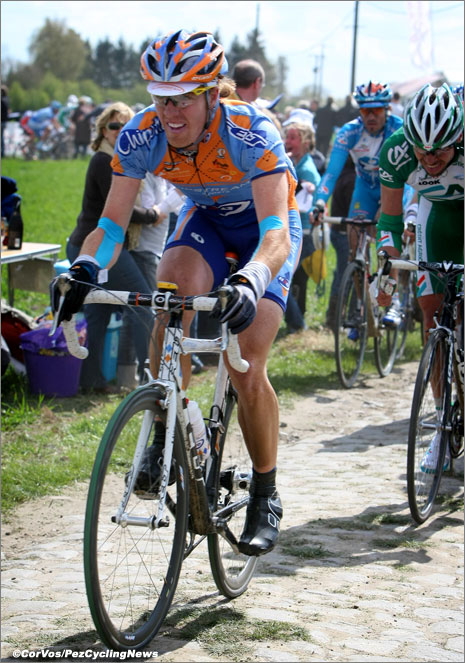 The Northern Classics and Paris-Roubaix are the big objectives.

Pez: The left the biggest names behind you.
Tyler: Yeah, like I said, it’s fantastic to win at this level; a terrific boost to my confidence, especially going into the Northern Classics. 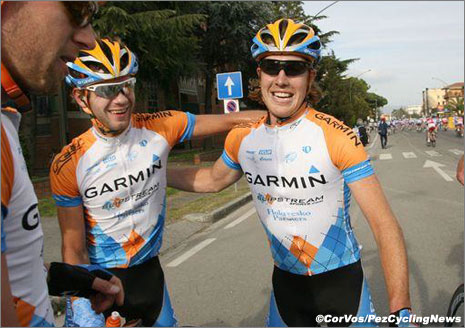 One win inspires the rest of the team – and this week the team has notched two after Vande Velde’s solo at Paris-Nice.

Pez: Did you feel ‘special’ when you got up, today?
Tyler: I felt OK, yeah – the last two days have been frustrating for me, on both stages there were climbs with 15 K to go and I got shelled both times!

Pez: Did Christian’s stage win in Paris – Nice help inspire you?
Tyler: Oh yes! That’s how good morale builds; we see him winning and we want to win – that’s wins in for us in both of the big stage races, so who knows what our next win will be. 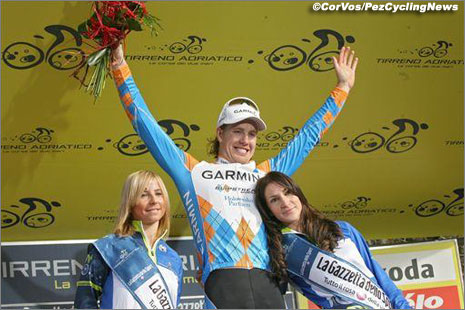 The podium and pretty girls – that’s just icing on the cake.

Pez: And how was that FELT bike?
Tyler: Great, they were good last season, but over the winter they’ve done a lot of development and they’re even lighter and stiffer now. FELT take a lot of notice of rider feedback – and it shows.

Pez: Do you work at your sprint in training?
Tyler: Yes, over the winter I spent a lot of time in the weight room and I do sprint drills behind the motor bike, so I do work at it. 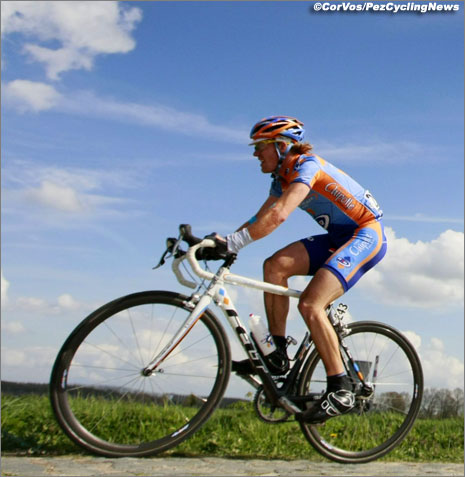 Pez: Can we look for you in the Primavera?
Tyler: Milan – San Remo is a different race, 300 K with a lot of hills in the finale; our man for that is much more likely to be Julian Dean, he’s proven himself there.

Pez: What’s the programme after that?
Tyler: After Milan – San Remo, I’ll go home to Gent and then it’ll be straight into the Northern Classics – they’re my big objective for the early part of the year – de Panne, Tour of Flanders, Gent – Wevelgem and Paris – Roubaix. After that I’ll shut down for a while to recover – the programme after that is a little up in the air. If the team decides to select me, it’ll be the Tour, if not then I’ll ride the Vuelta.
—

It’ll be a shame if we have to wait until September to see Tyler do his 53 x 11 thing again; but who are we to argue with Mr. Vaughters – he’s not getting much wrong at the moment.

With thanks to Tyler for his time – watch for him at de Panne and Wevelgem!