Rider Interview: UAE Team Emirates’ Diego Ulissi has a long and glorious career and is still only 28 years old, but then he was World junior champion in 2006 and then again the next year. Since then the wins and top placings have rolled in for the man from Tuscany. On Sunday Diego won the second Canadian WorldTour race in Montréal and so Ed Hood caught up with him to hear all about it and much more. 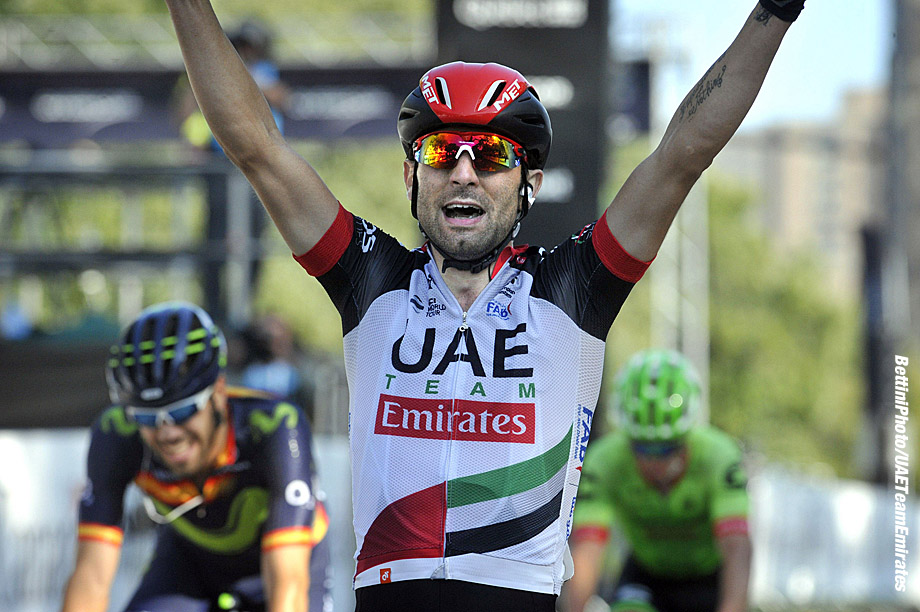 Only two riders have managed to defend their world junior road race championships, both Italians; Giuseppe Palumbo who won in 1992 and ’93; he went on to have a long professional career but with no major victories, retiring after season 2010. The other was Diego Ulissi, who won in 2006 and 2007 and is still adding to an illustrious palmarès which includes six Giro stages, Italian semi-classics and on Sunday last, the World Tour GP Cycliste de Montréal.

Ulissi won the Italian novices’ road championship in 2005 and the following two years was World Junior Champion. As a U23 in 2008 there were wins in races like the Coppa del Grano and in 2009 events like GP Commune de Cerreto Guido. He turned pro with Lampre for season 2010 where he has remained ever since; UAE Team Emirates where he is this year is really Lampre with more sand. . .

As precocious as he was when a junior he pulled off a big win as a neo-pro, the GP Industria e Commercio di Prato. In 2011 there was a Giro stage win and a stage win/GC ‘double’ in the Tour of Slovenia. For 2012 it was two Coppi-Bartali stages and the GP Industria e Commercio Carnago. The 2013 season was anything but unlucky with a stage win and GC in Coppi-Bartali, a stage in Poland and a brilliant late season triptych of Milano-Torino, Coppa Sabatini and Giro del’Emiliia. He started early in 2014 with a stage in the Tour Down Under, the GP Citta di Camaiore and two Giro stages followed. There was another Giro stage in 2015 as well as the Memorial Pantani.

Last year he took another two Giro stages, a stage in Slovenia, Circuito de Getxo plus a stage and the GC in the Czech Tour. His Montreal win adds to the 2017 Costa degli Etruschi. We spoke to the 28 year-old Tuscan the day after his commanding performance in Canada. 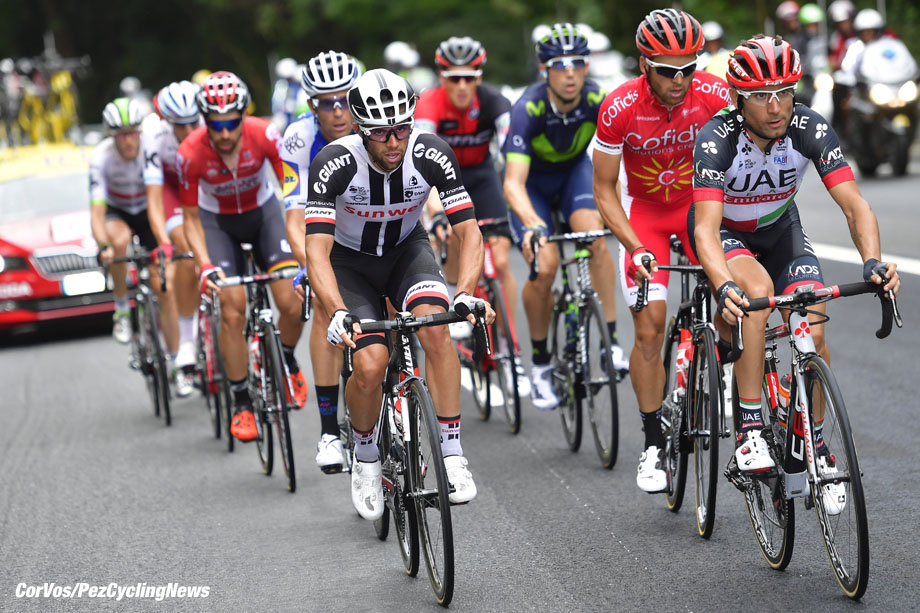 PEZ: Congratulations on Montreal, Diego; you’ve been good in the Canadian races the last few seasons – why such an affinity with them?
Diego Ulissi: Thanks, I’m very happy I finally succeeded in winning in Canada. I really like these races, everything is so good there; the courses are very interesting, especially GP Montreal which is more selective, the locations are great and the organization is perfect. Everything comes together nicely to create the perfect atmosphere for racing and motivates riders to vie for the win.

PEZ: Tell us about Diego Ulissi – where do you live? Are you married? Do you have children?
Yes, I am married. My wife Arianna and I have a beautiful five year old daughter, Lia. We’re originally from Donoratico, near Leghorn, in Tuscany and have lived in Lugano, Switzerland, for some years now. 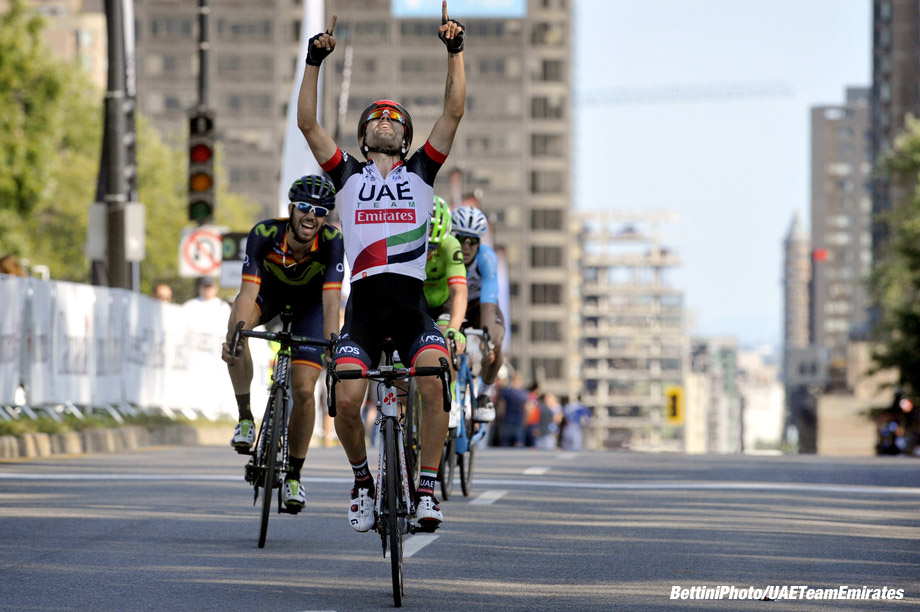 PEZ: What are you interests away from the bike? Are you a soccer fan? Which team?
Oh definitely a football fan, a Juventus fan to be more specific. I really like football, it’s a family affair. I was named Diego after Diego Armando Maradona, my father would have liked to name me Michel as in Platini, but my mother wasn’t on board with that. In the end reached a compromise and I’m Diego.

PEZ: You are a Tuscan – what are the characteristics of the breed – are you a typical one?
You’ll notice that with every different area of the Tuscan region the characteristics of the people vary. I’m from the area near Leghorn; we’re straightforward and engaging and open to welcome everybody. Moreover, as a true Tuscan, I like good, delicious Tuscan and Italian food. 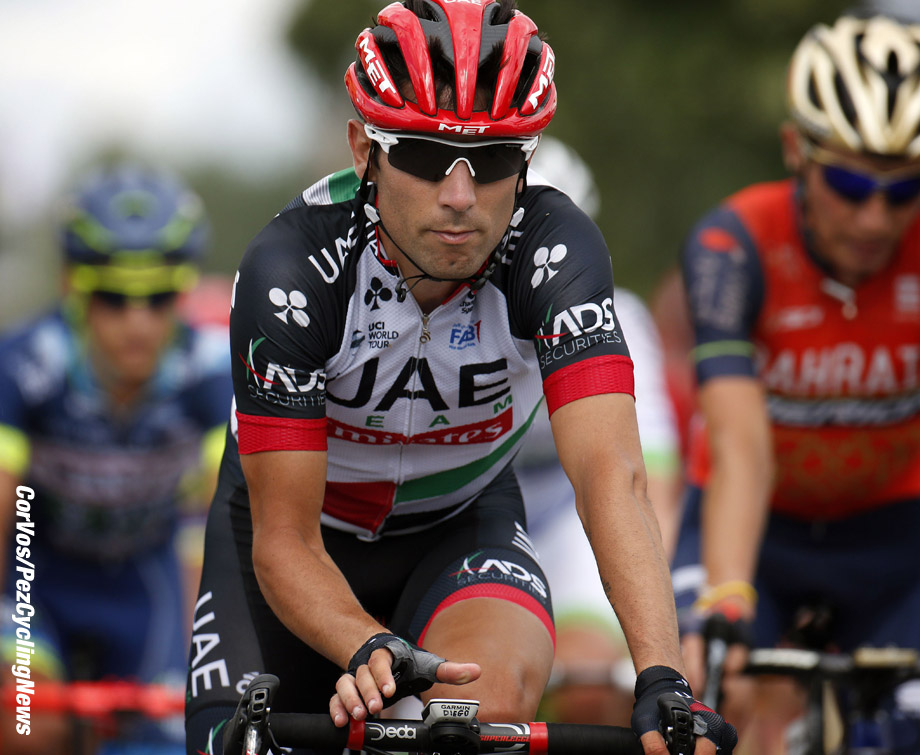 PEZ: Is that why the GP della Costa Etruschi is so important to you?
Yes, it is my home race, it was the first pro race I was exposed to as a child and I have good memories of watching it with my father. We would await the cyclists to come zipping down the road. I grew up really wanting to win it and have managed to achieve this personal goal this year.

PEZ: Looking back, was winning the Junior Worlds twice a good or bad thing? Was too much expected of you as a U23 rider?
I think that all and any victories are, for a cyclist, good things. I don’t feel the two Junior World champion titles negatively impacted my career. In the two years as Under23, I faced one troubled season as I fell ill with mononucleosis, however I still managed to win some important races and I confirmed that Giuseppe Saronni was right in trusting me and believing in me. In fact he supported by transition into the professional world of cycling with Lampre. 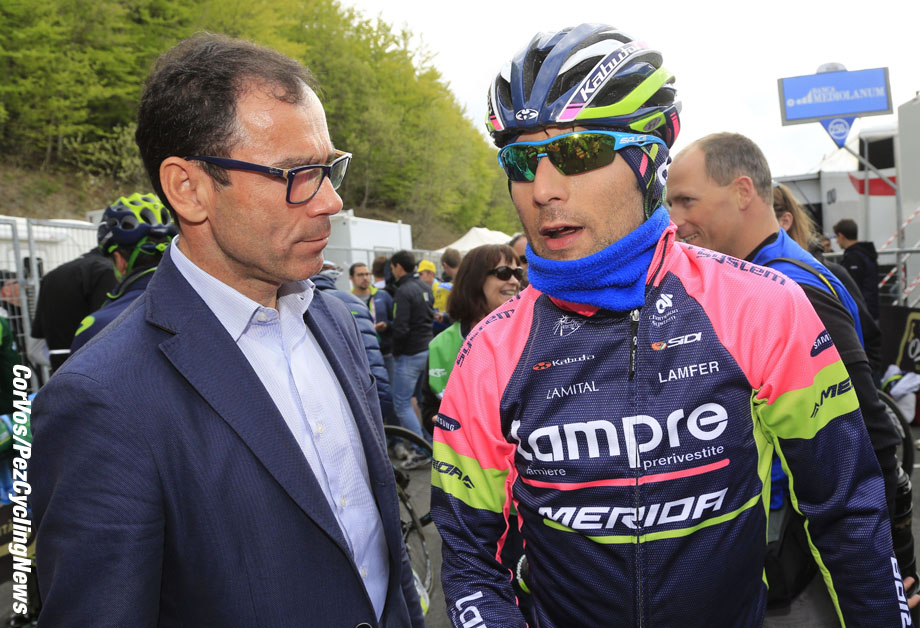 PEZ: How would you describe yourself as a rider now?
I’m competitive on the hilly courses and I’m pretty fast in restricted sprints, especially if the arrival is on light hills. Year by year, I have worked on improving my stamina and climbing skills.

PEZ: Lampre to UAE, have there been many changes?
For me, as an Italian young rider, becoming pro and then joining a team like Lampre was the dream. The team was managed by one of cycling’s heroes – Saronni and the main sponsor was the Galbusera family company. I feel they all played an important role in all the success I have achieved in my career and they always had my back in hard times. The change to the new configuration of the team was smooth for me and I still feel like I am riding for the same team since the staff, the sports directors and most of the management remained the same. So it’s still home for me. However, that being said it was great to discover a world which was new for me as well, the United Arab Emirates, and to appreciate how cycling is a growing sport in their community. It is incredible! The country’s efforts in undertaking the initiative to grow the sport of cycling as well as encourage youngsters to try the sport is commendable. Having a professional team is a sound step in the right direction and I am proud to be racing for a team that represents the UAE and by association being an ambassador and advocate for their message worldwide all the while trying to be an inspiration to a younger generation of cyclists. 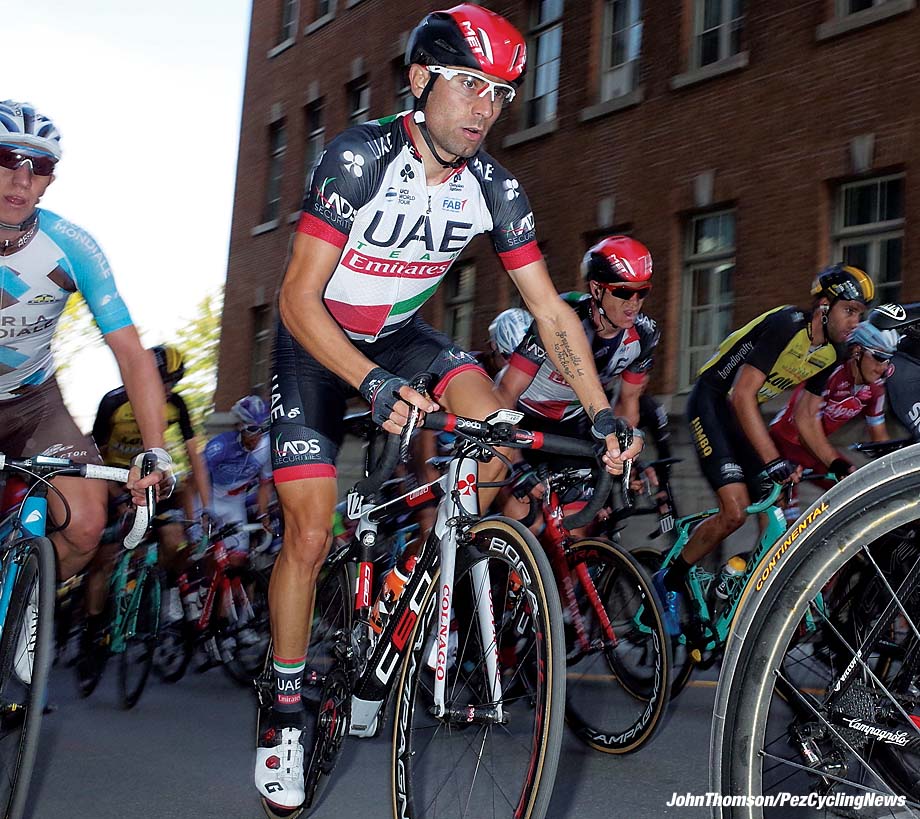 PEZ: Your first Tour de France, this year – what were your impressions?
Tour de France is such a huge event; everybody was telling me about how famous and a big deal this event is. The Grande Boucle was all it was hyped to be; now I fully understand what they were talking about. It is a completely different experience. I liked the race and the passion of the fans, unfortunately I missed the victory when I was second behind Mollema. 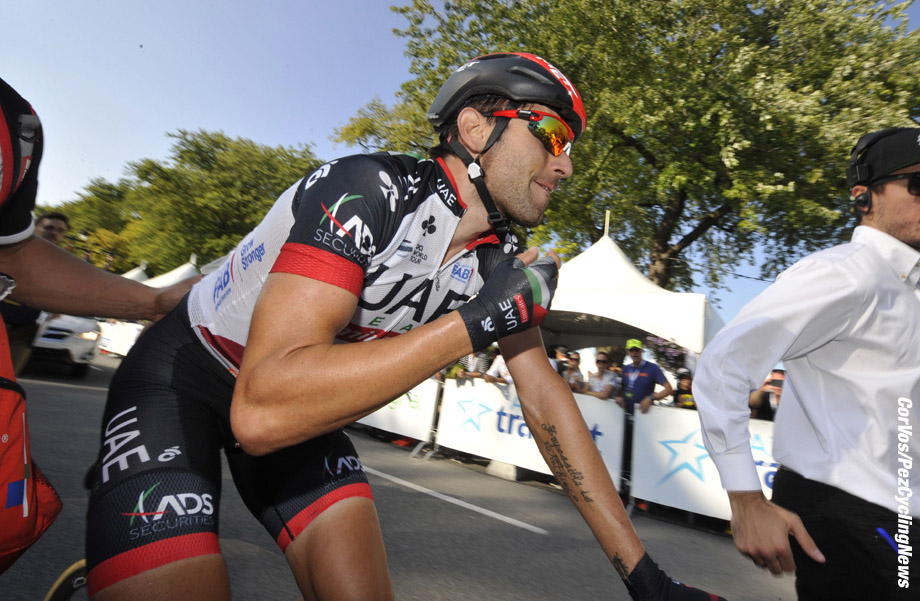 PEZ: You will surely be in the Italian team for the Worlds – a very strong team with you, Nibali and Trentin, how do you decide who is leader? [The Italian Worlds team was announced after the interview: Daniele Bennati, Alberto Bettiol, Sonny Colbrelli, Alessandro De Marchi, Gianni Moscon, Salvatore Puccio, Matteo Trentin, Diego Ulissi, and Elia Viviani. ed]
I still don’t know if I’ll be in the Italian national team, the technical director Davide Cassani will decide if I could be a useful rider for the team. I’m always happy when I can give my contribution to the National team and if the technical director decides to choose me to be in the selection, I’ll try to do the best for the team whatever role I’ll be assigned.

PEZ: Have you studied the percorso yet? What do you think?
I don’t know the course well, I talked with some riders and they told me that there won’t be demanding hills, but the down hills and the roads on the coast could shake up the peloton and decide on how the races go. 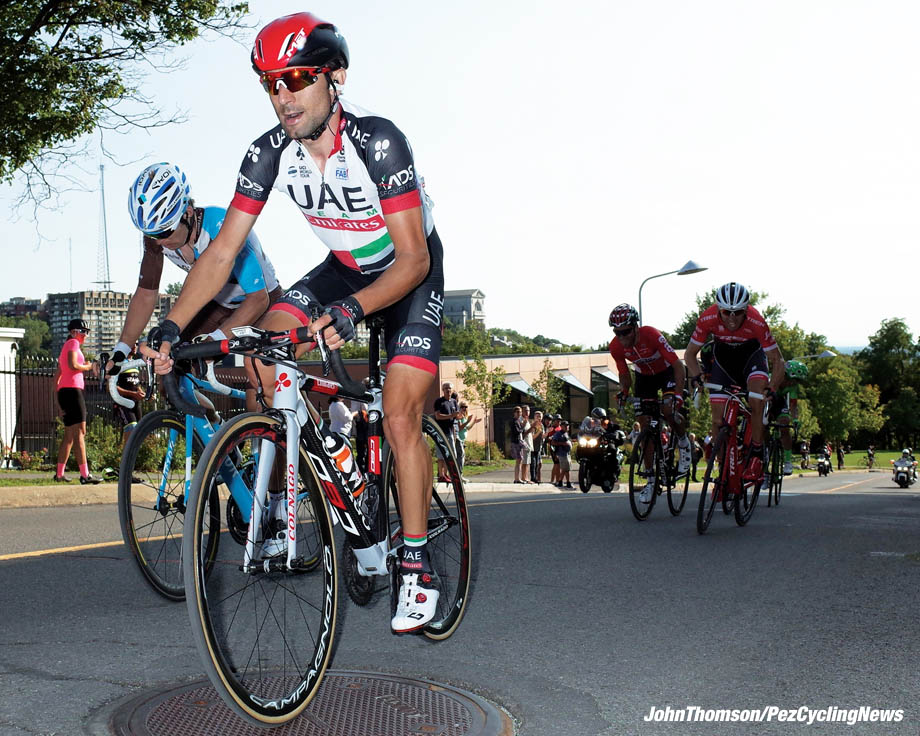 PEZ: Many are saying that the weather could be a big factor?
Yes, of course, a long race, such as the World Championship, could be heavily influenced by the bad weather and the forecast shows that there may be high odds of rainy weather.

PEZ: Do you have a particular memory of Alberto Contador for us?
When I turned pro, all the young cyclists like me had Alberto as their cycling hero. He was mine as well. It was an indescribable feeling, exciting even, to be able to race in the same peloton as him. 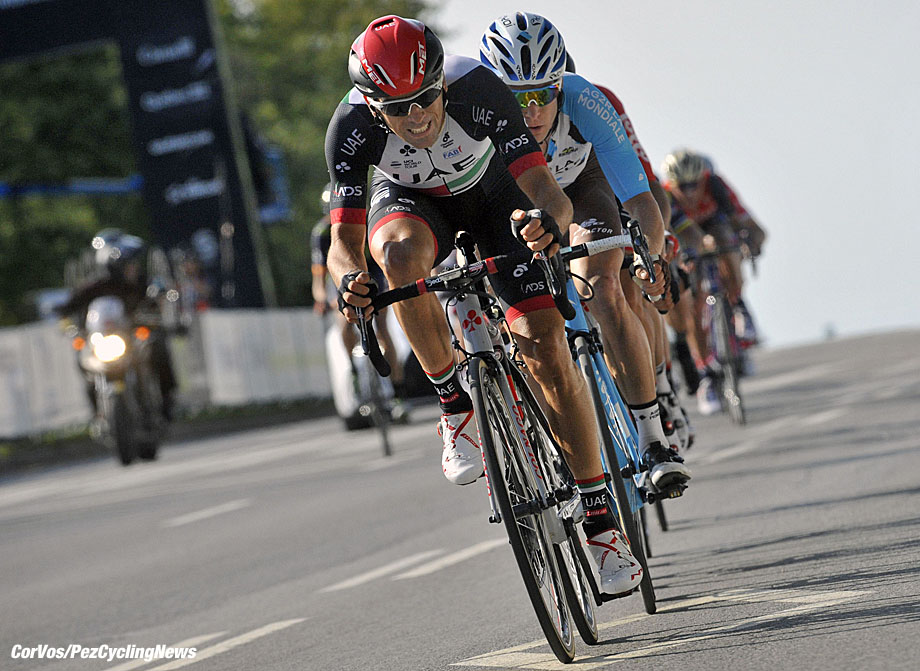 PEZ: If you could change one UCI rule, it would be?
That’s a good one. If I could change one I would put a rule in there that any cyclist whose surname starts with a U get a five second bonus in Time Trials, haha. I’m joking! I am not really sure I guess it would be difficult to decide as managing a worldwide sport’s rule book is a difficult thing.

PEZ: If you could win just one more race, what would it be?
Liege-Bastogne-Liege, it’s a race I really like: the course, the atmosphere and the history of its winners. Everything makes La Doyenne a special race.

# With thanks to Diego and Sahar Makki at UAE Team Emirates for organizing the interview. # 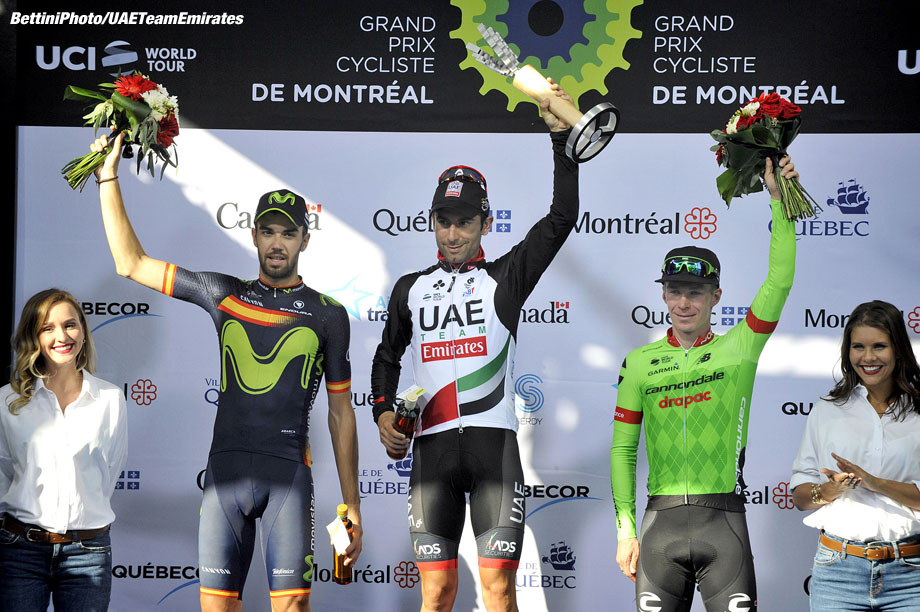