Rider Interview: Joe Dombrowski has been a ‘name’ for the last 10 years, but an iliac artery problem delayed his tilt at the top. Since then the young man from Delaware, turned a corner in the Giro d’Italia and changed team to UAE Emirates. Ed Hood caught up with him self-isolating in the US. 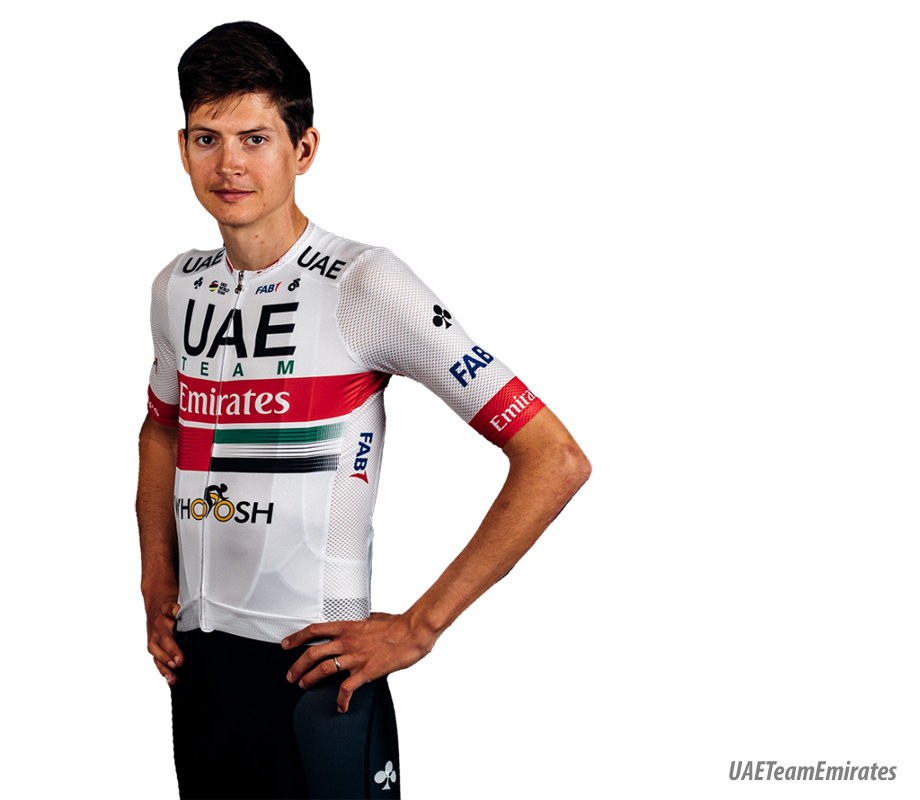 New team, but a short season so far

It was way back in September 2011 on the eve of the Copenhagen World Championships when we first interviewed Joe Dombrowski, no one seemed to have noticed that he’d won a stage and finished second overall to a certain Fabio Aru in the Giro della Valle d’Aosta – one of the biggest u23 races in the world. But they did notice the following year when he beat aforementioned Sen. Aru to win the ‘Baby’ Giro. 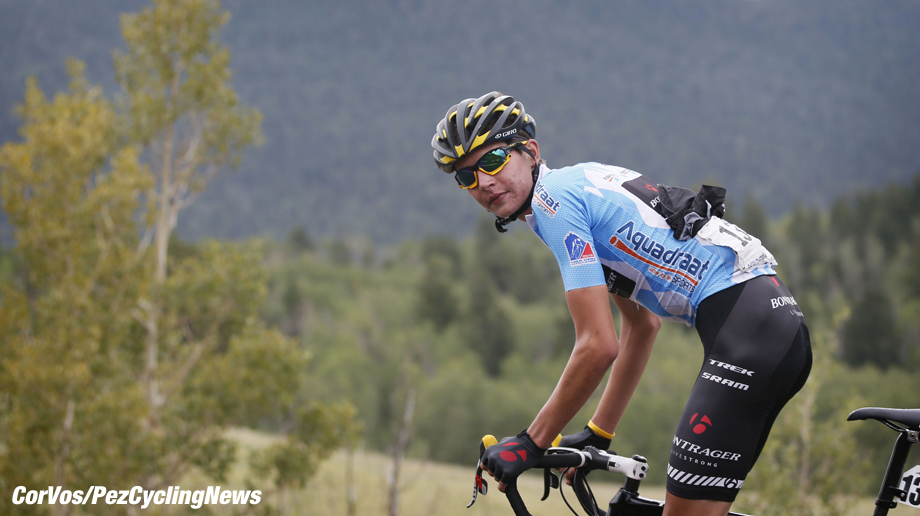 Back in 2012 USA Pro Challenge

A WorldTour contract was sure to follow and it was British mega team SKY who obtained his signature. Iliac artery problems compromised his time there but he underwent successful surgery in 2014. Season 2015 saw him sign with Cannondale and take the overall GC in the Tour of Utah, he would remain with the team in its various incarnations until the end of 2019. 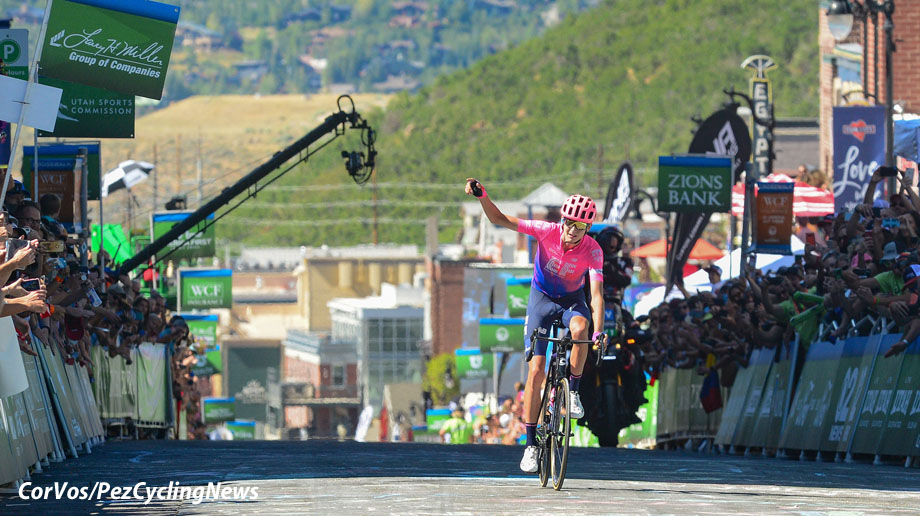 Last season saw a stage win in Utah and an encouraging 12th spot on GC in the Giro d’Italia. But for 2020 he’s joined UAE; he took time to speak to PEZ recently:

PEZ: Your season ended well with Utah – you must have carried good morale into the off season?
Joe Dombrowski: It’s always nice to end the season with a victory. I would have liked to have done more racing later on in the season, but unfortunately I did not have any races on the calendar. Sometimes when it is known that you will leave a team, that’s just the reality.

PEZ: A great start for UAE with 11 wins for the team before the ‘rug was pulled’ – must add to the disappointment?
We got off to a great start this year. It seemed like everywhere, at every race, the team was winning. Sometimes I think that sort of winning spirit can be infectious (no pun intended)!
Of course it was disappointing to have to stop racing, but if you take a step back, and look at the bigger picture, we are not alone in this. There are many people in all types of work who are going to struggle through this period, and I hope that we can put this behind us quickly, and in the meantime, I hope that we can trust that our world leaders will handle this crisis through policy in the best possible way. This is a challenge of magnitude which we have not seen in perhaps a couple generations.

PEZ: Are all the iliac issues behind you, no discomfort?
Yes, I’m glad to report that I am healthy and happy. 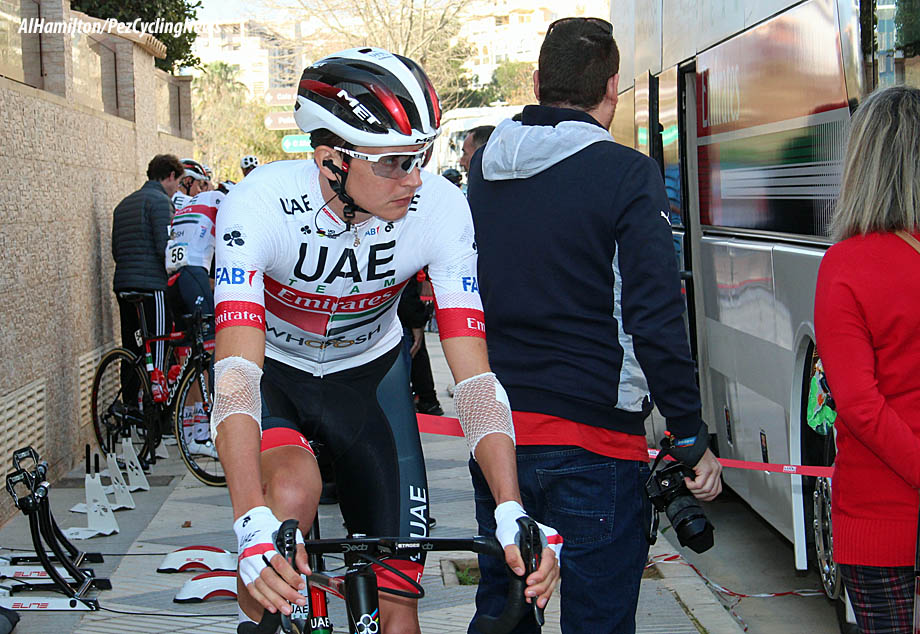 Ready for the start of Valencia stage 4

PEZ: Were you happy with your rides in Valencia and the Algarve which kicked your season off?
Overall, yes. It was a good start to the year from me. In Valencia, unfortunately, I had a couple of crashes which put a damper on things. In any case, it was a pleasure to work for Tadej Pogacar in Valencia, especially when he won so convincingly. I was feeling quite good in Algarve, and riding strongly. I was there to support Rui, so it wasn’t an opportunity to chase my own results, but it still ticked the box in my own head confirming, “Yeah, I’m where I need to be now.” I think it would have been a good spring for me.

PEZ: Before the crisis, what were your goals for season 2020?
I was focused primarily on the Giro, at least for the first half of the year. After that, we would need to reassess, and make new objectives for the second half of the year. Of course, now, all that planning has been thrown out the window. I am optimistic that we will still be racing later this year, and when we have a clearer picture of what that might look like, everyone can start to think about their objectives. In the meantime, it’s about keeping fit, positive, and looking at the scenario pragmatically … it’s not often pro bike riders get to spend time with their families this time of year. 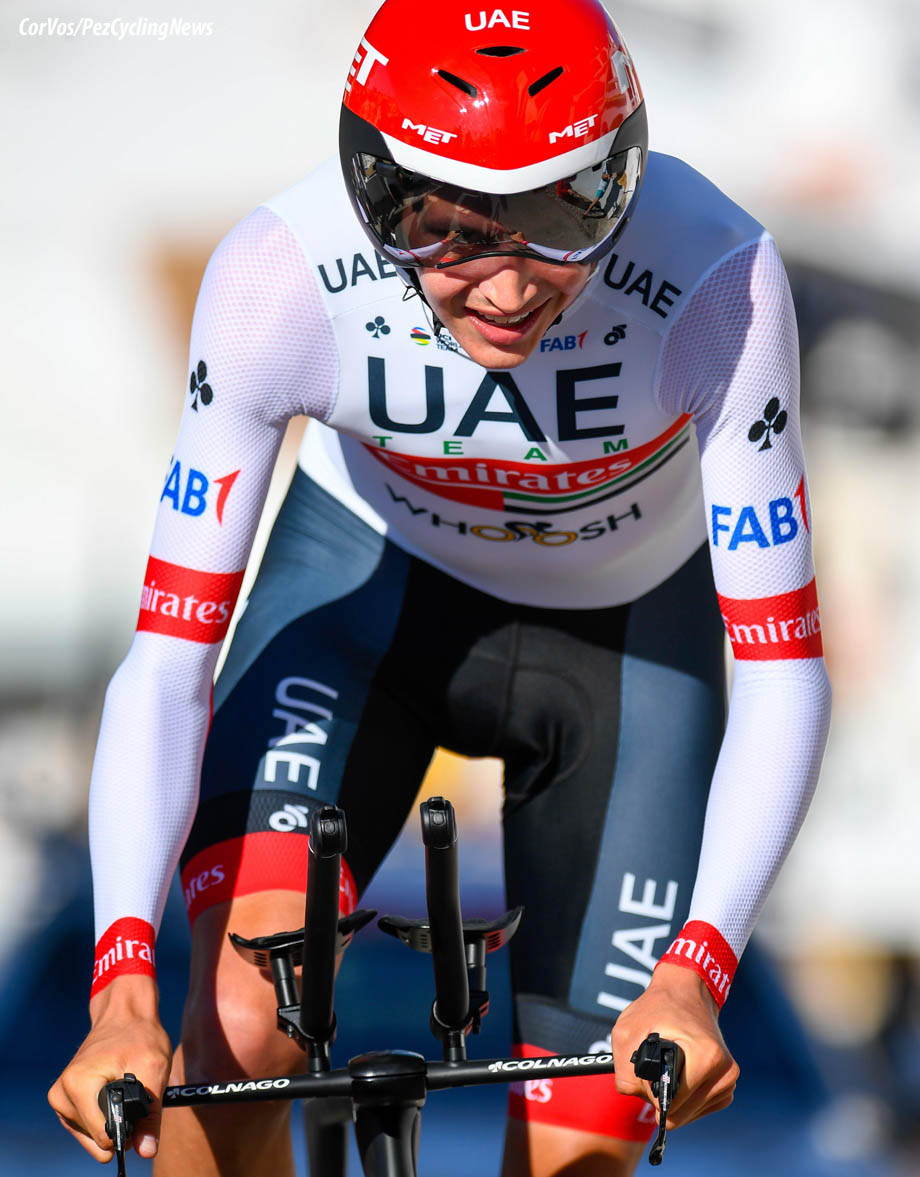 PEZ: Where are you isolated about – still in Nice – do you have company, I remember that loneliness had been an issue for you in the past?
My wife and I were both in Nice, but we returned to the US about a week ago. In Nice we live right downtown, in the port. I found the inability to go outside for cycling, or otherwise, a bit draining. In the States we live in a more rural area, and I felt that at this time, it would be better for us. Generally speaking, we love it in Nice and it has become our home. We still get back to the US over the holidays, but for the most part, I don’t miss it.

PEZ: How are the cooking skills?
That would be 7/10… I am an early riser, so I usually handle breakfast, and my wife generally makes dinner. We both like to eat healthy, and to eat well. 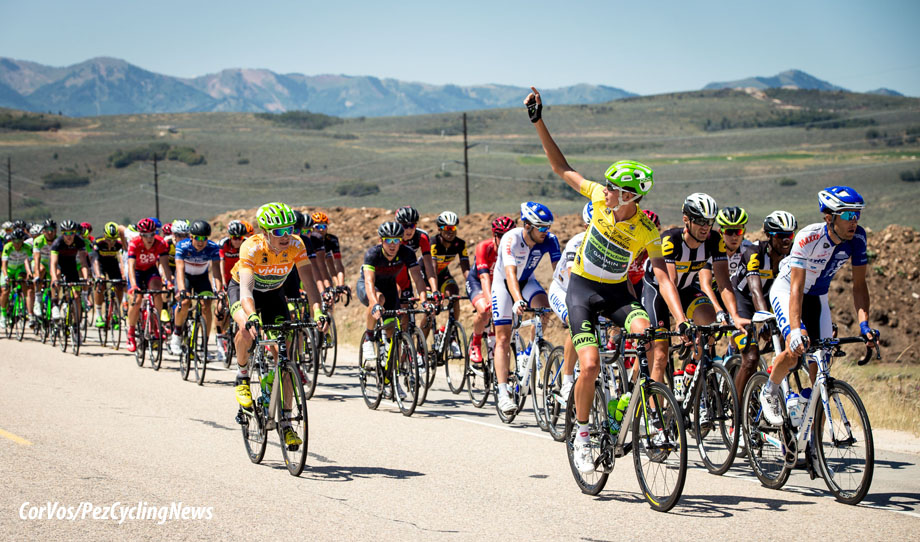 PEZ: What ‘anti-cabin fever’ measures have you adopted?
In Nice we are lucky to have a garden, despite living in the city, we took advantage of that in the week that we were there in lockdown. Back here in the US, outdoor activity with strict social distancing measures is still permitted, which has been a relief.

PEZ: What sort of training are you doing given there are no firm goals to aim at?
At the moment, I am just trying to keep generally fit. I think it’s best not to be overly prescriptive at this time, however, the layoff from racing does provide time to focus on things that are easier to neglect during the race season, such as strength and mobility work. 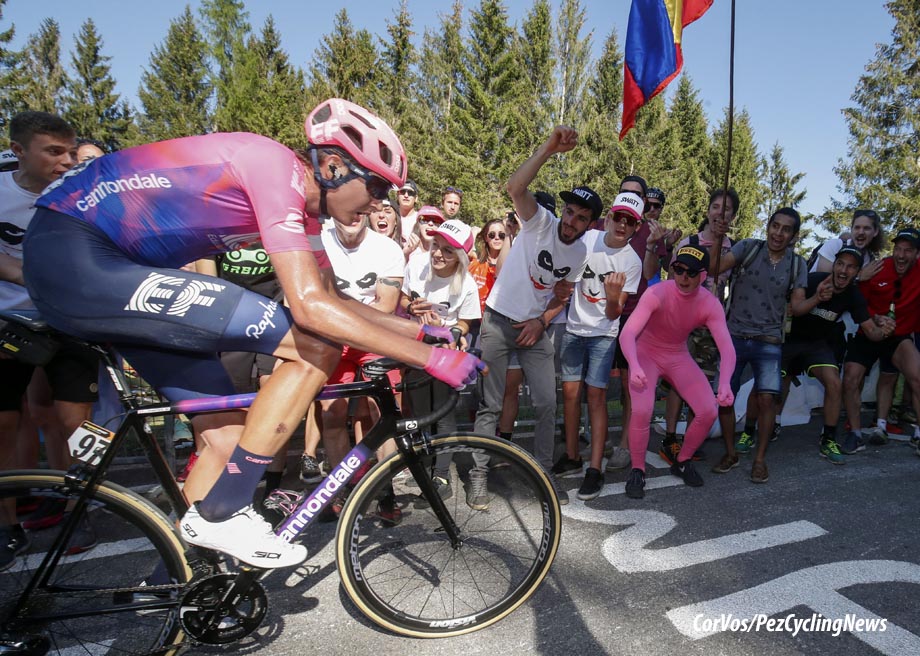 PEZ: You were 12th in the Giro last season, a corner turned?
It was a good Giro for me last year. I had re-signed for one year with EF, after two seasons of poor results and I fully recognized I was under pressure to perform. I had also realized that the coaching relationship I had was not working, and I decided to change things for the 2019 season. I started working with Jim Miller last year, and I have to credit him for helping me get out of the hole I was in.

PEZ: It was a surprise to see you leave EF – why go?
I enjoyed my time with EF, there are a lot of great people there, but in order to continue growing as a rider, I felt that I best served in a new environment. 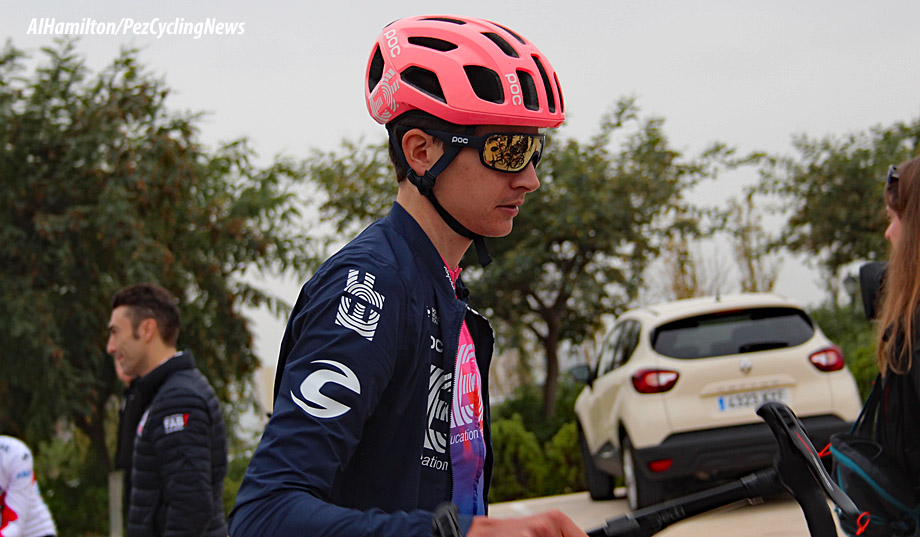 PEZ: How’s the vibe at UAE compared to EF.
Pretty much the same. On the surface, teams can seem that they might be different culturally, but when you are inside a team, you see that you have a group of young guys who love racing their bikes, and staff passionate about the sport. Cultural barriers are easier to break down than people think, especially when there is a common denominator, as is the case in professional cycling. 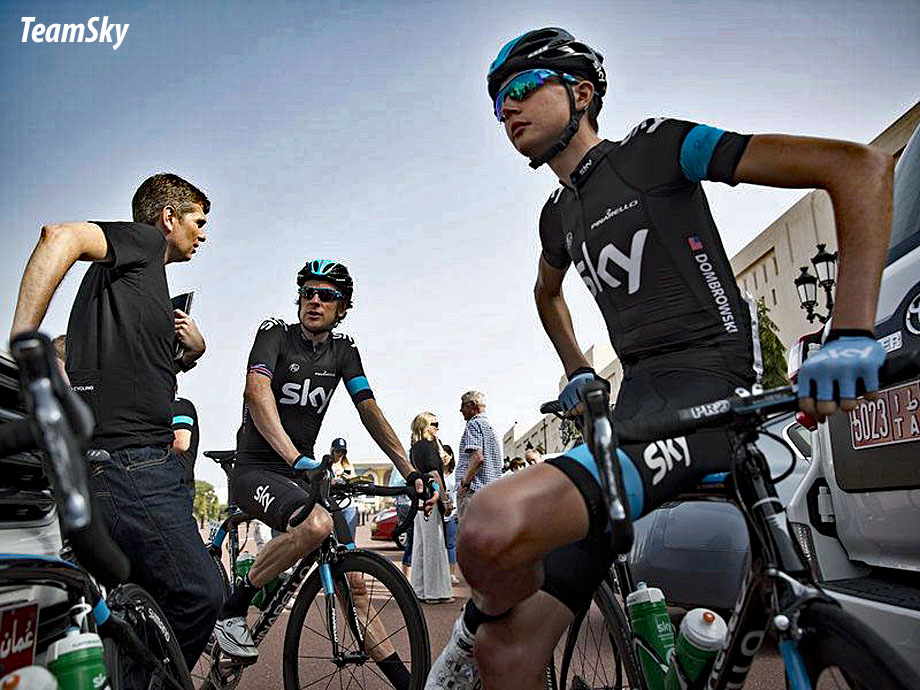 With Wiggins at Team Sky

PEZ: With EF behind you and with the benefit of hindsight, was Sky a mistake?
I don’t think Sky was a mistake. I dealt with some injuries in that time. That could have occurred in any team. I certainly learned things there, and in the end, we have to recognize that we make decisions with relevant information that is in front of us at the time.

PEZ: How much freedom will you have within the UAE squad?
I guess we will see when we get back to racing. UAE Team Emirates has a very talented roster, and so in coming to a team like this, everyone has to do their part. I hope with hard work, focus, and a bit of luck, I can show that I deserve some freedom too. 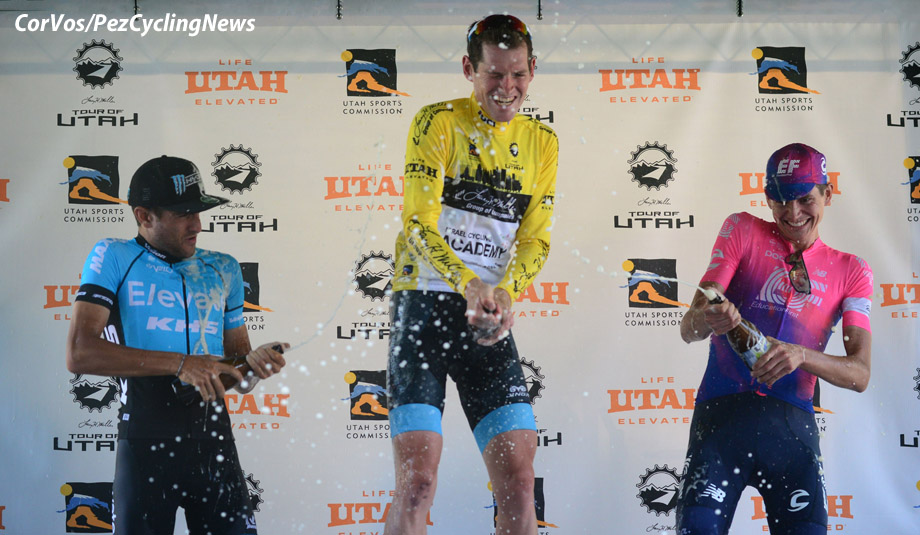 PEZ: A lot of water under the bridge since you won the GiroBio; how has the expectation of pro-life matched the reality?
I’ve had ups and downs, but I think anyone who sets out on any fruitful venture, be it bike racing or otherwise, does so on the basis of optimism. I think that my best is still ahead of me.

Behind the Ride – At Home with Joe Dombrowski